Accessibility links
At Aretha Franklin's Funeral, Gospel Was The Heart — And Backbone Many of the performers and speakers, from Chaka Khan and Jennifer Hudson to Rev. William Barber and author Michael Eric Dyson, underscored the church legacy in the Queen of Soul's voice and civil rights work. 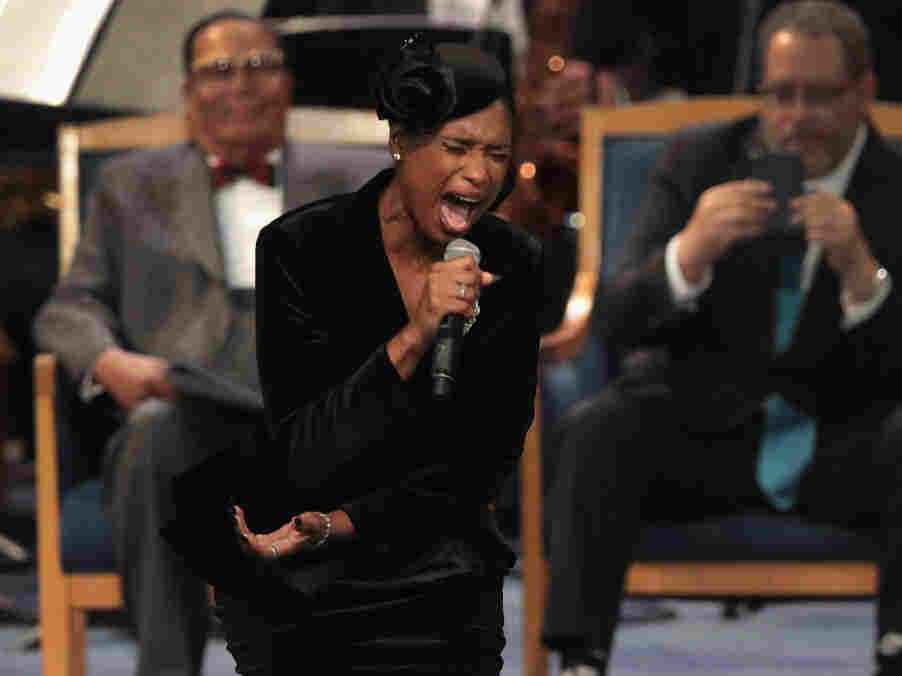 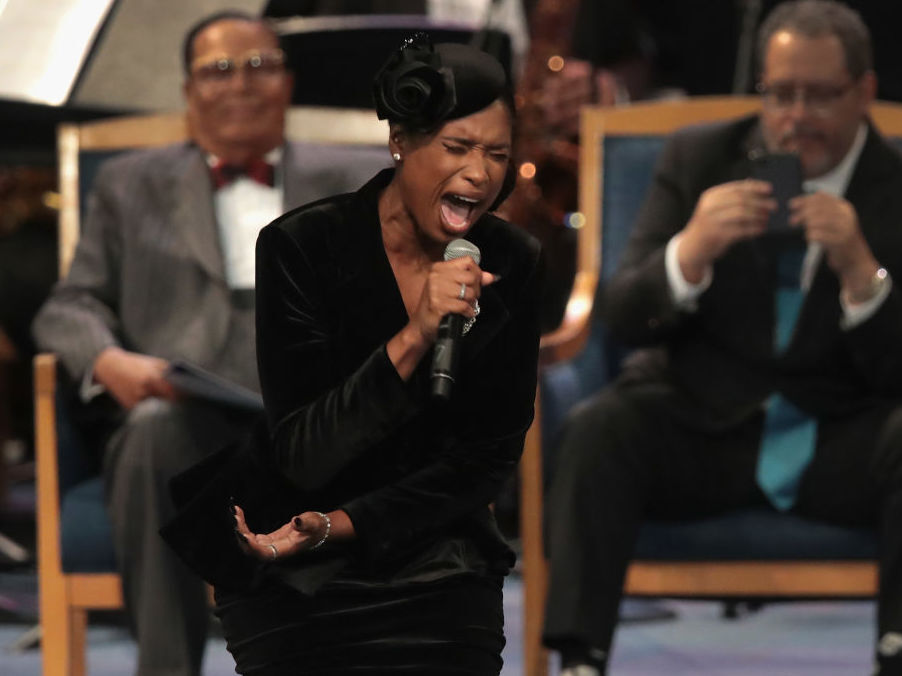 Aretha Franklin's funeral service on Friday in Detroit was an extraordinary occasion by every measure as family, friends, civil rights activists, preachers, and a former president celebrated the Queen of Soul. And the undercurrent to it all was music.

All kinds of musicians were at the Greater Grace Temple to pay tribute to a legend and the raw power of her music. Some of the performers, including Stevie Wonder, counted Aretha Franklin as a friend and colleague for many decades.

Smokey Robinson and Franklin grew up around the corner from each other. "So now my longest friend has gone home," Robinson told the assembled mourners before he sang "Really Gonna Miss You" a cappella — his voice sweetly piping out alone across the hushed church.

Other performers came to know Aretha Franklin much more recently. Singer Jennifer Hudson was reportedly handpicked by Franklin to play her in an upcoming biopic. At the funeral, Hudson blazed through the song "Amazing Grace."

Gospel music was the backbone, and the heart, of Aretha Franklin's homegoing service. Franklin made her first recordings at age 14 in her father's church in Detroit, New Bethel Baptist. And there were gospel inflections in everything she sang, as one of the speakers, the Rev. Dr. William Barber, pointed out. at the funeral.

"In Aretha," Barber said, "the holiness of the sacred and the secular came together, in a way that could be only ordered by the Lord. Some say that even as the world spins, there is a certain tune to the world's orbit. Aretha tapped into that tune, and taught us its rhythm."

Some performers directly reflected that lifelong history that Aretha Franklin had with gospel. Franklin once filled in for Shirley Caesar when she was just 16 years old. At Friday's service, Caesar sang with, by comparison, a more up-and-coming gospel artist, Tasha Cobbs-Leonard — who is, in her own right, one of the most popular musicians in gospel today.

Funk singer Chaka Khan built on that church foundation when she spun out the gospel tune "Goin' Up Yonder" at the service.

Speaker after speaker pointed out that Aretha Franklin's legacy as an artist is inseparable from her work as an often undersung hero of the civil rights movement — work that so often began in churches. Author and Georgetown University professor Michael Eric Dyson said that her advocacy and support stretched over decades.

"She was about getting Angela Davis out of jail," Dyson noted. "She was about working with Martin Luther King Jr. and Jesse Jackson and Al Sharpton. She was about transforming the existence of black America."

Aretha Franklin helped transform her community, and, through her music, she moved a much larger world.