Accessibility links
In Germany, A Murder Sparks Anti-Immigrant Demonstrations Far-right and anti-immigrant activists rallied in the German town of Chemnitz on Saturday to protest the murder of a local, allegedly at the hands of migrants. 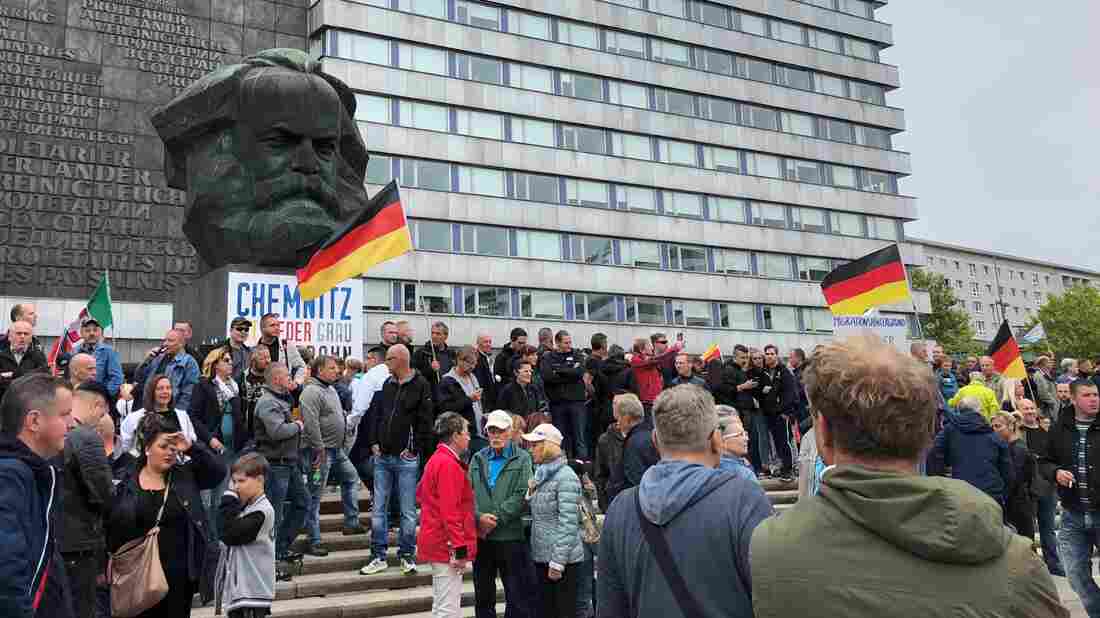 Far-right demonstrators gather in front of the Karl Marx Monument in the German city of Chemnitz on Saturday. Soraya Sarhaddi Nelson/NPR hide caption 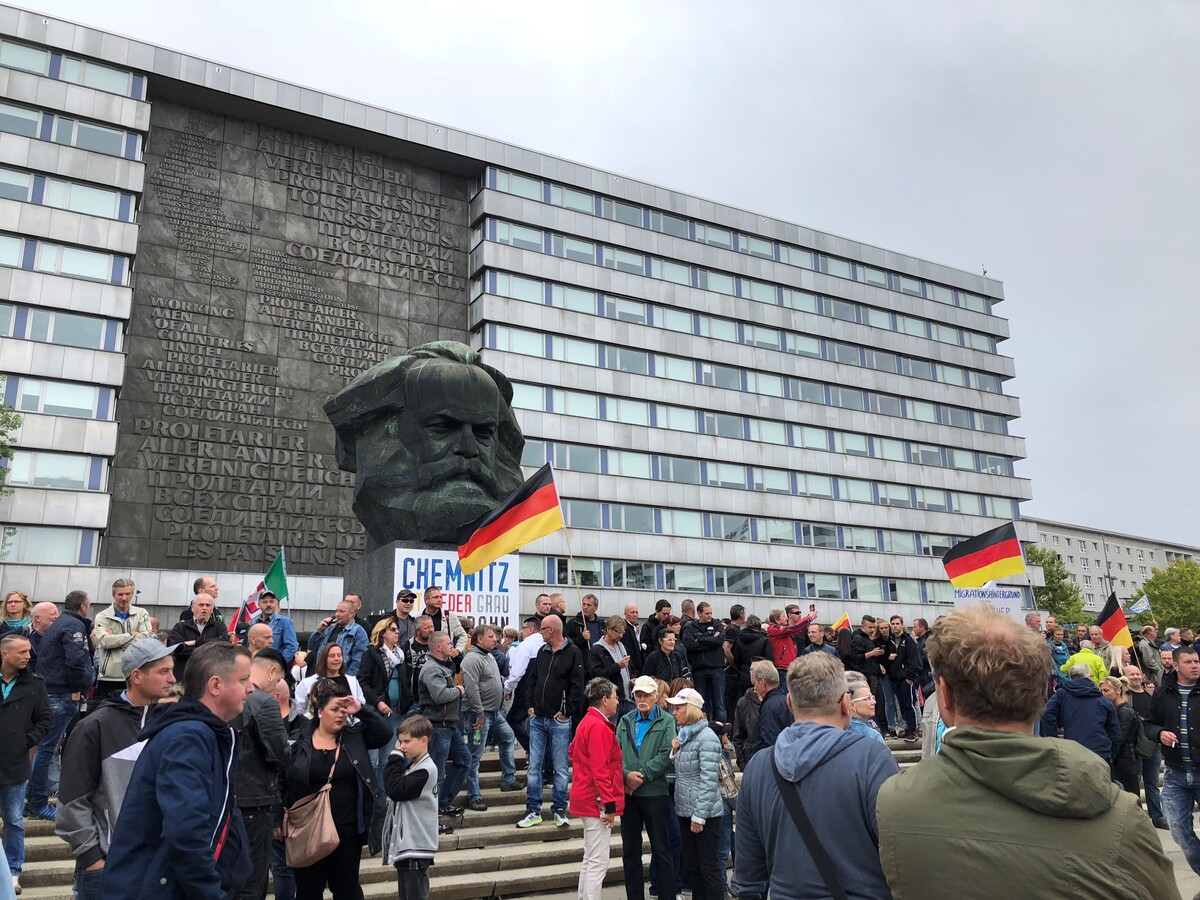 Far-right demonstrators gather in front of the Karl Marx Monument in the German city of Chemnitz on Saturday.

In a sign of growing xenophobia in Germany, thousands of far-right protesters descended on the city of Chemnitz on Saturday, one week after the stabbing death of a 35-year-old German carpenter that has been blamed on two Middle Eastern asylum seekers.

Hundreds of heavily armed police officers – including many on horseback – were brought in from around Germany to control the crowds, while most residents stayed away from downtown. Many of them watched from their balconies as far-right groups silently marched past, carrying white and yellow roses, German flags and posters featuring German victims of crimes blamed on asylum seekers.

The police stopped the march only 45 minutes after it started after counter-protesters from the anti-fascist, or "antifa" movement, managed to infiltrate the march and tried provoking clashes. Nevertheless, the demonstrations on Saturday were much less violent than those that took place in Chemnitz earlier this week.

Police in the state of Saxony, where Chemnitz is located, later tweeted: "The overwhelming majority are behaving peacefully. For those looking for trouble, we say that we remain heavily deployed in the city and we repeat our request: Stay peaceful!"

But neither police nor the local and German federal officials who organized a more sparsely attended "Heart instead of Hounding" counter-demonstration in a nearby park failed to ease the tensions that have overwhelmed Chemnitz and left the German federal government in Berlin reeling. German Chancellor Angela Merkel this week condemned the "hate on the street."

The far-right has long held sway in this region — once a part of the former communist, East Germany. The populist Alternative for Germany, which is the main opposition party in the German parliament, had its strongest showing in Saxony during last fall's national elections. But what is worrying officials this time is how the extremists were able to whip up widespread xenophobia and quickly call up large protests only hours after the death of German carpenter Daniel Hillig.

Chemnitz Mayor Barbara Ludwig told reporters on Saturday that the far right "may be stirring things up, but I'm convinced forces will continue to mobilize – like we clearly see here today – who won't allow the right, or their thoughts or a far-right state to take hold."

Nearby, at the Karl Marx Monument, where far-right protesters gathered, Martin Kohlmann, who leads a nationalist citizens movement called "Pro Chemnitz," told the crowd they are not vigilantes as Ludwig and other opponents claim, but are acting in self-defense.

"The Frankfurter Allgemeine newspaper recently misquoted me – but it did make the point: 'Take the knives away from the migrants, otherwise we will take away your ministries,'" Kohlmann said.

Police have yet to say what prompted the knife fight that led to Hillig's death. Nor have they said much about the suspects, identified by authorities as asylum seekers Yousif A., 22, of Iraq – who had been ordered deported two years earlier — and Alaa S., 23, of Syria. They are charged with manslaughter.

A prison officer leaked the Iraqi's arrest warrant, which ended up on far-right websites and helped spur the anti-immigrant rallies in Chemnitz during the past week.

The officer was suspended and may face criminal charges.

Several German media, including the newspaper Tagesspiegel, report Hillig, whose father was Cuban, was pro-immigrant and would have abhorred the far right using him to further their cause.

Kohlmann on Saturday unfurled a Cuban flag he claimed was given to him by Hillig's life partner, claiming she had asked that he and others who were marching to carry it because Hillig identified as both German and Cuban.

"We aren't against foreigners like we are accused of," he said to applause.

Another speaker later said Kohlmann was mistaken about the flag, saying it merely came from an acquaintance of the murdered man.

More protests are expected on Sunday.