Accessibility links
Mother Of Parkland Victim Wins School Board Seat: 'I Won't Stop' Until Kids Are Safe Lori Alhadeff's mission is to make all U.S. schools safe, starting with Broward County, Fla. After her daughter was killed in February's mass shooting, politics has become her vehicle for change. 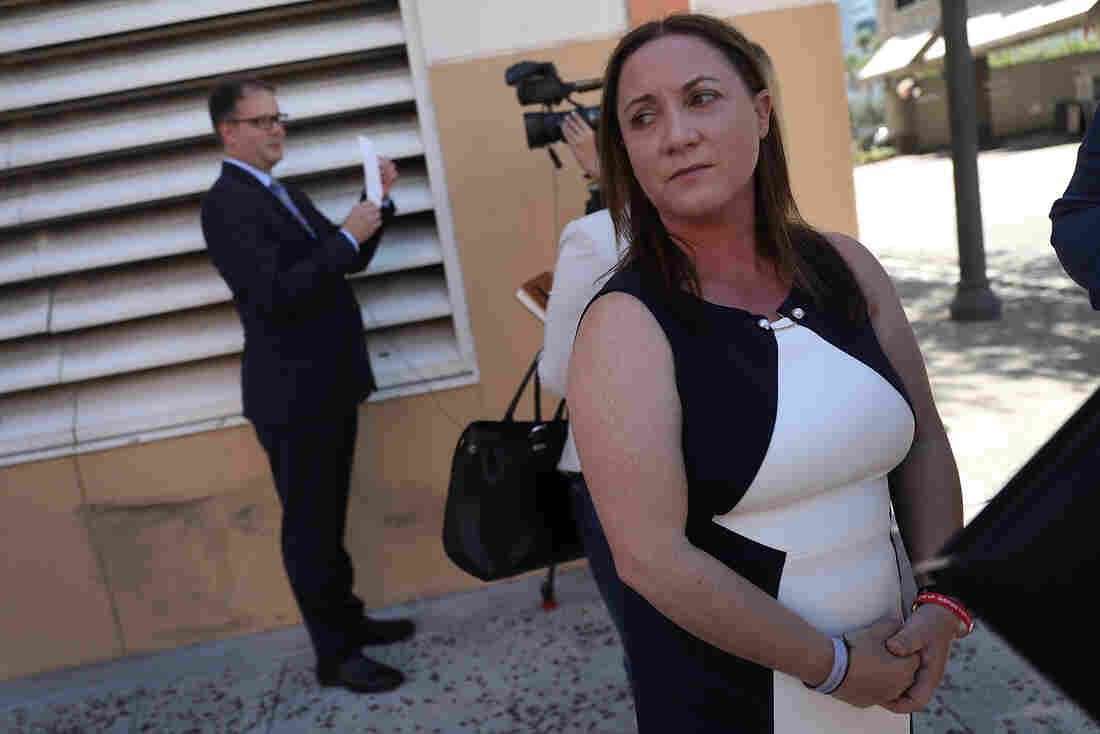 Lori Alhadeff and Ryan Petty, left, are seen in Fort Lauderdale, Fla., after turning in their paperwork to run for the Broward County School Board in May. Both parents had a 14-year-old daughter who was killed in the mass shooting at Marjory Stoneman Douglas High School in February. Joe Raedle/Getty Images hide caption 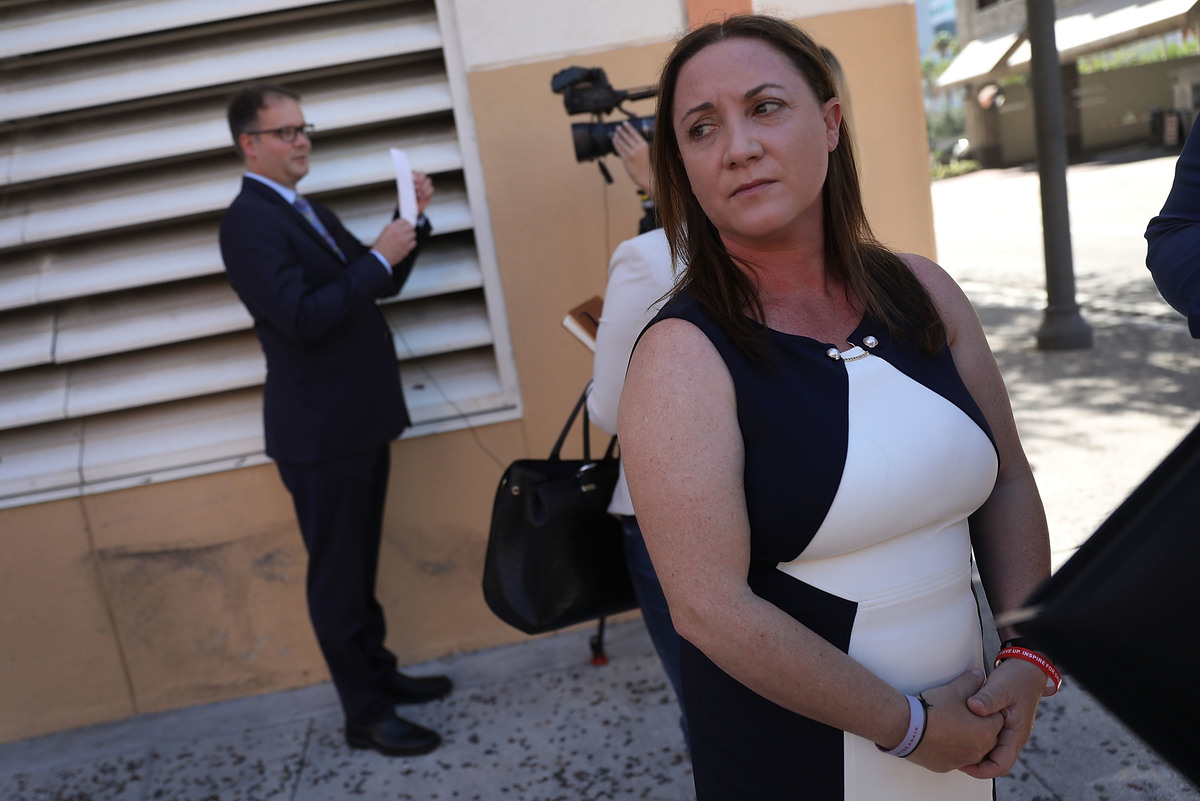 Lori Alhadeff and Ryan Petty, left, are seen in Fort Lauderdale, Fla., after turning in their paperwork to run for the Broward County School Board in May. Both parents had a 14-year-old daughter who was killed in the mass shooting at Marjory Stoneman Douglas High School in February.

Before Lori Alhadeff ran for a seat on her local school board, she had no experience in politics. She didn't even consider herself a "political person," she says.

That changed when her daughter, Alyssa Alhadeff, died in the Parkland school shooting. In February, a former student killed 14-year-old Alyssa and 16 other people at Marjory Stoneman Douglas High School.

"When my daughter was brutally shot down with an AR-15 gun, I switched to become a Democrat," Lori Alhadeff told NPR's Melissa Block Saturday on Weekend Edition. "I feel that the Democratic Party better aligns with banning the assault weapon rifle."

She says she was inspired to take political action while sitting shiva — the week-long Jewish mourning period — for Alyssa. During shiva, Alhadeff says she met a lot of community members calling for change.

"Everyone was like, 'We want change, we want change,' " but at the same time, Alhadeff heard, "But I can't do it." At that point, she says, "It became very clear to me that I needed to have a seat at the table, to have a voice to have a vote. To make change happen." 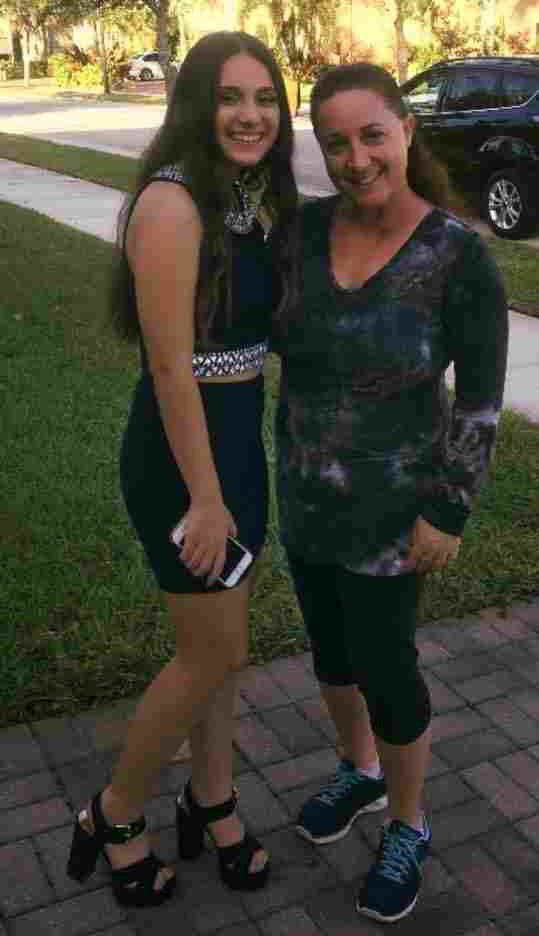 Lori Alhadeff, right, has been elected to the Broward County School Board in Florida, after her daughter Alyssa, left, was killed in February's Parkland shooting. Courtesy of Lori Alhadeff hide caption

Another push came from Andrew Pollack, a school safety activist whose 18-year-old daughter Meadow Pollack was also killed that day, when he nominated Aldaheff on social media to run for the school board.

"And I was like, 'you know what, I can do this,' " she says. Alhadeff will be sworn in this November. She's a former health education teacher, and for the past 14 years she's been a stay-at-home mom. But her lack of political experience doesn't deter her from taking on the challenge.

When it comes to tackling the issue of school safety, Alhadeff proposes "layers and layers of protection." The first layer of protection, she says, starts at home. "Communicating with parents how they need to also be alert to their children, what's going on on their social media, looking at their phones, knowing their passwords and checking their bags."

Alhadeff is following her own recommendations. She bought her two young sons, aged 11 and 13, ballistic-resistant backpacks. "I've taught them how to use that bag protect their face and their vital organs in front of their body," she says. "I've also gone through code red drills with them explaining to them to know where to go in the classroom and that if a threat comes to them that they have to fight for their life."

The second line of defense is "school hardening," Alhadeff says. She wants every school to have a single-point entry.

Some school safety advocates, however, don't think that implementing a single-point entry plan is a good idea when a threat requires students to evacuate quickly.

Alhadeff disagrees. "The single-point entry is just getting into it one way," she says — there would be exits in different locations around the school.

As for the armed teacher debate, she's firmly against arming teachers. "Our teachers are qualified to teach our students," she says. "We need to give them more paper, pens, resources for their classrooms. But absolutely we should not be giving them a gun."

Alhadeff, meanwhile, is looking beyond Broward County. "Number one, we want to make sure our schools are safe so what happens [happened] to our children never happens again," she says. She wants nationwide guidelines in place to inform schools about best safety practices.

"This can come from the government and then trickle down to the states and to the state's districts," she says. "School safety is going to be different from one school to the next but we can have certain standards — just like we do for fire safety."

But she's not waiting for the federal government to act. She created a nonprofit, Make Schools Safe, aimed at making every school in the U.S. safe through providing safety protocols and best practices specific to the needs of each campus.

"Until we make schools safe," Alhadeff says, "I'm going to be working so hard for the next four years to work here in Broward County for the schools to make change happen — and I won't stop."

NPR's Ian Stewart and Barrie Hardymon produced and edited this story for broadcast.