The excerpt follows some background information provided by NPR.

The series of investigations that eventually led to the impeachment of President Bill Clinton began in a New York Times story that questioned some of his business dealings back in Arkansas. This was in 1992, when he was still a candidate for president.

The allegations continued in his first year in office, leading him to direct Attorney Gen. Janet Reno to appoint an independent counsel to investigate. Early in 1994, Reno named Robert Fiske, Jr., who was tasked with looking into a failed land development deal (Whitewater) in Arkansas and the bankruptcy of a savings-and-loan there, Madison Guaranty. But Fiske was allowed to widen his scope, which would come to include the death of Clinton's first White House counsel, Vince Foster, and matters related to Hillary Clinton's law practice.

Later that same year, the independent counsel law was revised and renewed by Congress, creating an opportunity for a panel of three federal judges to replace Fiske. They chose Ken Starr, a prominent figure in Republican circles who had been a Supreme Court clerk, an assistant attorney general, a federal appeals court judge and U.S. solicitor general. Since Clinton's election, Starr had been in private practice. He accepted the job of probing the Clintons, a task that would absorb his energies for the next 4 1/2 years.

Building on Fiske's work, Starr obtained some verdicts against Clinton associates in Arkansas and confirmed that Foster's death had been a suicide. But his office was still in operation in January 1998, when it received a call offering information relevant to perjury in a civil suit against the president, information she had on a confidential basis from a friend named Monica Lewinsky. It turned out Lewinsky had told her of an affair she had with the president when she was a 22-year-old White House intern. What followed dominated the news for the next year and changed the course of many lives and careers.

In his memoir Contempt, 20 years later, Ken Starr details his work as independent counsel. This excerpt below, published first by NPR, offers Starr's reflections on his team's first encounter with Monica Lewinsky.

Early on the evening of Thursday, January 15, Jackie Bennett, accompanied by Stephen Bates, a Harvard-educated member of the brain trust, met with Eric Holder at his office on the fourth floor of Main Justice. Bennett presented the situation while 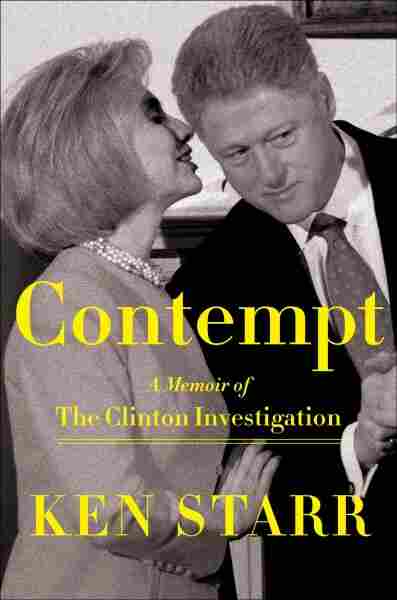 A Memoir of the Clinton Investigation

Bennett knew Holder well from their service together in the Public Integrity Section of the DOJ. He liked Eric, but thought he was a better politician than prosecutor. Holder assiduously cultivated an image of savvy-lawyer-about-town, often getting photographed for puff pieces that law firms loved to display in their waiting rooms and wave about to clients. Eric had enjoyed a meteoric rise in four years to become deputy AG.

They explained we were happy to pass off the investigation to the DOJ, if that was what the Main Justice leadership deemed appropriate. In fact, on balance, that was what I preferred.

Holder listened carefully, posed a few questions, and went up the private elevator to the fifth floor to talk to his boss.

Bennett and Bates left. Later that evening, word came from Holder. The Attorney General agreed we should continue with the investigation, at least temporarily. She would seek an expansion of jurisdiction from the Special Division judges on an expedited basis. A senior DOJ prosecutor, Josh Hochberg, who I knew well, came to our offices to meet with our prosecutors and review the situation. He listened to the tape from the body wire.

On the morning of Friday, January 16, the judges quickly gave their approval. "The Independent Counsel shall have jurisdiction and authority to investigate to the maximum extent authorized by the Independent Counsel Reauthorization Act of 1994 whether Monica Lewinsky or others suborned perjury, obstructed justice, intimidated witnesses, or otherwise violated federal law . . . in dealing with witnesses, potential witnesses, attorneys or others concerning the civil case Jones v. Clinton."

Again, we had to move fast. Tripp was scheduled to meet Lewinsky that day for lunch at the Ritz-Carlton.

Our team dubbed the operation "Prom Night." Fresh from the gym, wearing purple sweats, Monica arrived. After Monica and Linda had chatted for a short time in the lobby, by predesign Steve Irons and several other FBI agents swept in. Identifying themselves, they did not place Monica under arrest, but simply invited her and Tripp to accompany them.

Our team of prosecutors awaited the women's arrival in two adjoin- ing hotel rooms on the tenth floor. I was standing by in my office. When they arrived upstairs, Monica turned on Tripp in a fury. She realized she'd been set up.

In one room, Binhak interviewed Tripp for several hours; she left the hotel at 4:00 p.m.

In the other room, Mike Emmick led the charm offensive with Monica. With FBI agents taking notes, the prosecutors explained their mission. Monica had a choice: She was facing federal charges of perjury and subornation of perjury. She could cooperate and in return receive consideration regarding whether and how we would charge her. The negotiating team was authorized to offer her complete immunity if necessary to secure her cooperation.

For an hour, Monica screamed, she cried, she pouted, and complained bitterly about her scheming, no-good, so-called friend. After a while, she calmed down and began asking questions. The meeting turned into a marathon. At one point, she wanted to call the lawyer who had drafted the false affidavit, Frank Carter. We made it clear she wasn't under arrest. She was free to leave, and she was free to call Carter. We gave her the number of the public defender's office. Our goal was to achieve her honest cooperation. At about four, Monica asked to consult with her mother, who was living in New York.

We immediately agreed. Monica phoned her outside our presence. Before long, Monica announced that her distraught mother was coming to Washington. Since her mother refused to fly, she was taking the next train from Manhattan. She would then find her way as quickly as possible to the hotel.

Wisely or not, we went along. We thought it was a good sign that her mother, Marcia Lewis, was rushing to be at her daughter's side. It was perfectly understandable, but we now faced a long delay. Monica refused to decide what to do without parental input and guidance.

In the company of Binhak, who was the youngest on our team, Monica strolled through the mall, shopped at Crate & Barrel, had a leisurely coffee. The conversation was all small talk. They returned to the hotel to await her mother's arrival. Monica sat in a chair reading the Bible while Binhak tried to find something suitable on TV to watch. He clicked until he found an old movie with Ethel Merman singing "God Bless America."

Jackie Bennett, the former tight end, came in to play the heavy. Monica again mentioned her desire to call her civil lawyer. He shrugged and said okay. They dialed the office number for Carter; he'd left for the day, so Monica left a message.

Not long after that, Monica said she wanted to go out for a walk. Binhak went downstairs with her and told her she was free to roam around the mall. He made it clear she wasn't under arrest. Monica nodded and walked through the lobby. Tired of babysitting her, Bin- hak turned to go back upstairs. But seeing Monica headed to a bank of pay phones, he held back. He saw her dial, then talk into the phone. She spoke for a few moments, then hung up.

Binhak learned she had called a White House number for Betty Currie and got an answering machine. She hissed "Hoover, Hoover" into the phone, as if she were speaking in code, which she later explained meant the FBI, as in J. Edgar.

She was trying to warn the president before his deposition in Paula Jones's lawsuit the following day. Nobody got the message, apparently— or if they did, they didn't understand it.

From my office, I was on the phone with our on-the-scene team throughout the day. But I ventured nowhere near the Ritz-Carlton. As the afternoon dragged on, the team grew frustrated. We were now at a standstill.

Marcia Lewis arrived about 10:00 p.m. Mother and daughter went out into the hallway to talk. They did not keep their voices down.

Binhak heard Mrs. Lewis urging Monica to cooperate. "You are in peril here," she said. "Give them what they need."

"I will not be the one who brings down this f****** president!" Monica shouted.

We had given Monica lots of time to think it over. She knew what she wanted to do, and who she was determined to protect. Monica overruled her mother. She would fall on her sword rather than implicate the president of the United States.

It was becoming increasingly clear: in thinking she was a naive, starstruck young woman in love who would quickly cooperate, we underestimated her. In her determination to protect the president, Monica kept a team of experienced FBI agents and career prosecutors twiddling their thumbs for much of the day. She was searching for the perfect solution. Monica doubtless calculated that if she could maneuver the situation, she would skate from criminal prosecution and at the same time not turn on the president. Marcia and Monica called Monica's father, Bernard, a highly successful physician in Beverly Hills, who had remarried. Dr. Lewinsky said he would send his family lawyer to Washington right away.

Our high hopes for a quick resolution had been cruelly dashed. Monica had now lawyered up. We could no longer communicate with her directly. Without the benefit of Monica's cooperation, we simply awaited the results of the following day. Who knew what Clinton might do? Perhaps he would come to his senses, and, at long last, settle the long-running Jones litigation "on the courthouse steps."

Excerpted from Contempt: A Memoir of the Clinton Investigation by Ken Starr, in agreement with Sentinel, an imprint of Penguin Publishing Group, a division of Penguin Random House LLC. Copyright © Ken Starr, 2018.