Accessibility links
After Bono Experiences Sudden Vocal Loss, U2 Cancels Sold-Out Berlin Show Four songs into the sold-out show, Bono experienced a "complete loss of voice." The singer suggested that standard smoke machines may have been the cause. 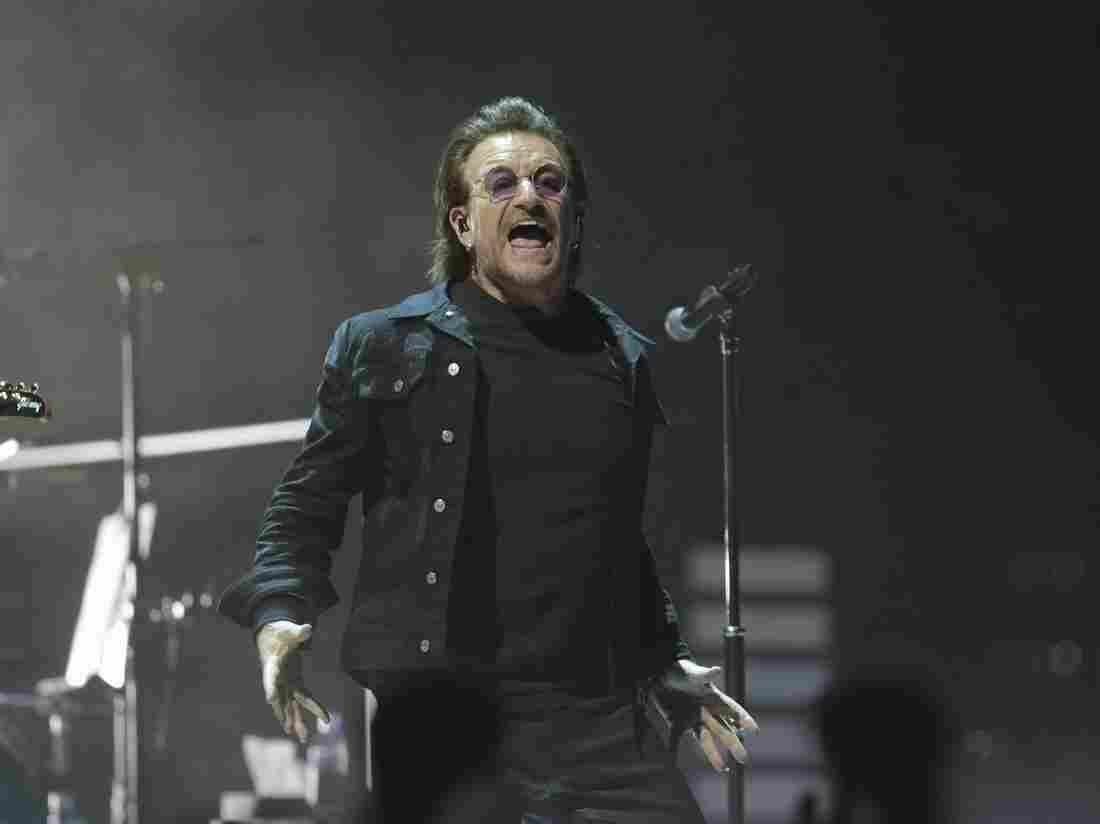 Singer Bono, of the band U2, performs onstage during the "Experience + Innocence Tour" at Capitol One Arena on June 17 in Washington, D.C. On Saturday in Berlin, Bono experienced a "complete loss of voice." Brent N. Clarke/Invision/AP hide caption 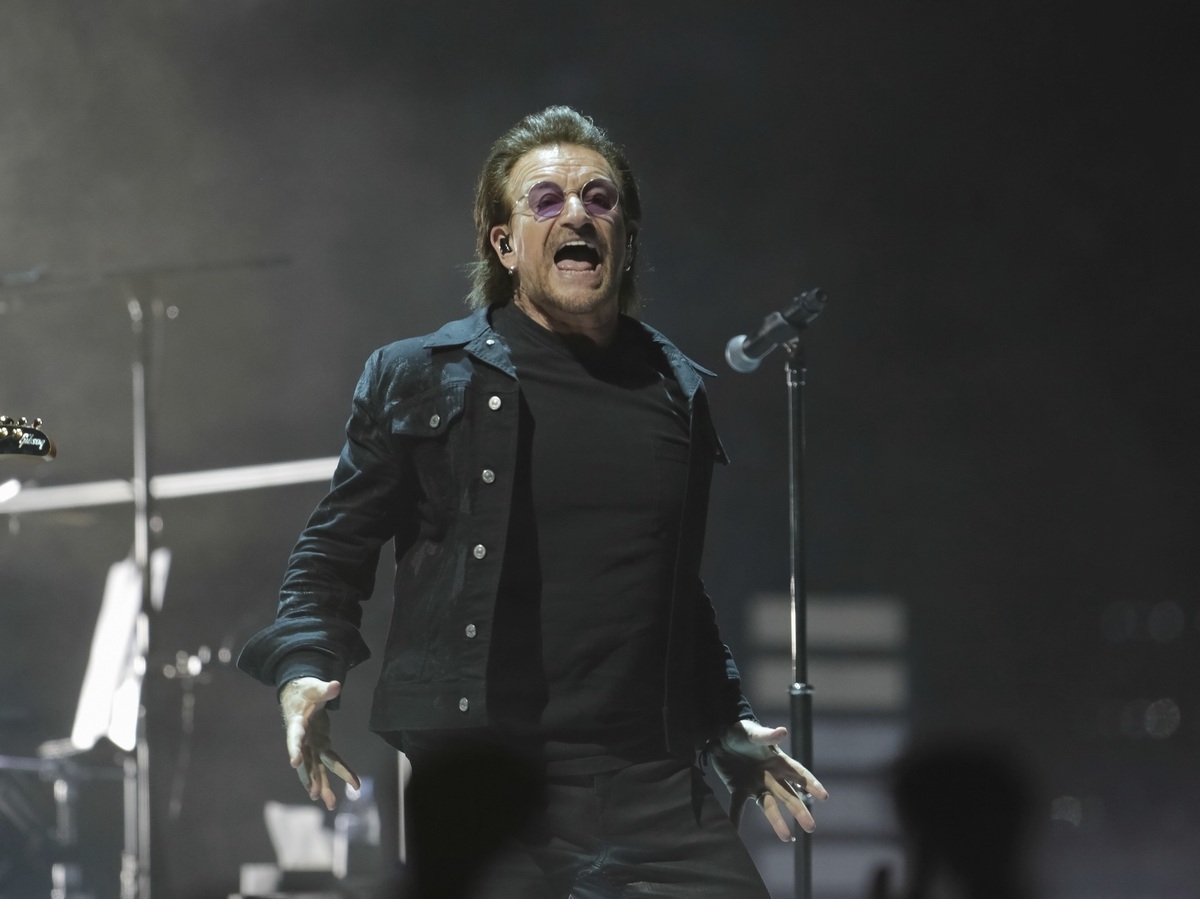 Singer Bono, of the band U2, performs onstage during the "Experience + Innocence Tour" at Capitol One Arena on June 17 in Washington, D.C. On Saturday in Berlin, Bono experienced a "complete loss of voice."

Just a few songs into a Berlin concert on Saturday, Irish rock band U2 canceled the remainder of its performance after lead singer Bono suffered "a complete loss of voice," band members said in a statement.

The 58-year-old frontman was performing the band's recently released "Red Flag Day," a song featuring the wailing, expressive vocals for which the singer is known, in the Mercedes-Benz Arena when his voice troubles began.

About 50 seconds into the song, Bono's vocals became shaky before cutting out. Visibly distressed, the singer stayed silent for a few verses. After drinking some water, he attempted to start back up — managing to sing a bit more before resigning altogether.

The singer started to experience vocal trouble during "Red Flag Day," as captured in this fan-made video.

"We're going to have to break for, I don't know 10, 15 minutes. I'll go find out what's happening," Bono said after the song concluded, to cheers of supportive fans.

Later, management announced the concert was over and suggested a possible replacement show.

"Bono was in great form and great voice prior to the show and we were all looking forward to the second night in Berlin," a statement released by band members Adam Clayton, Larry Mullen Jr. and The Edge said. "We don't know what has happened and we're taking medical advice. As always, we appreciate our audience's understanding and all our fans' support in Berlin and those who traveled from afar."

According to tweets from concertgoers, the singer suggested smoke from the concert's production may have been the cause, likening it to a "giant cigar." Some concertgoers remarked that smoke machines are a standard fixture of U2 shows.

#u2 called off concert early. #Bono said that he's not quite sure what's happened
. "I think it's the smoke. I can promise you I have not been talking, but this is like a giant cigar - I've lost my voice and I don't know what to do."#u2gig #berlin

The show was the 30th of the band's Experience + Innocence Tour, promoting its recent albums Songs of Experience and Songs of Innocence. If you have an iPhone, you might remember the latter album was downloaded automatically onto the Apple products in 2014 in a marketing push designed to show off the power of the company's cloud — a move for which the band was largely criticized.

U2 has been active for more than four decades and has won 22 Grammy awards. Its members, Bono especially, are known for their social justice work and philanthropy. Among other efforts, Bono co-founded the ONE Campaign, a campaigning and advocacy organization that aims to "end extreme poverty and preventable disease, particularly in Africa."

Bono was knighted in 2006 by Queen Elizabeth II for "his services to the music industry and for his humanitarian work." In 2017, the band canceled a St. Louis show over security concerns, following protests in the city over the acquittal of a white police officer who shot and killed a black man named Anthony Lamar Smith.

Bono suffered a spinal injury while preparing for a tour in 2010. He received surgery, and the tour was postponed and rescheduled for 2011.

On Sept. 2, one day after the cancelled concert, Bono released a statement with good news for U2 fans hoping to see the band soon.

"I've seen a great doctor and with his care I'll be back to full voice for the rest of the tour. So happy and relieved that anything serious has been ruled out," he wrote. "My relief is tempered by the knowledge that the Berlin audience were so inconvenienced. There was an amazing atmosphere in the house, it was going to be one of those unforgettable nights but not for this reason... We can't wait to get back there on November 13th."

A previous version of this story incorrectly said U2 canceled a 2017 concert in St. Louis to protest the acquittal of a white police officer who shot and killed a black man. The show was canceled over security concerns.