Accessibility links
Grizzlies Have Recovered, Officials Say; Now Montanans Have To Get Along With Them A healthy population of grizzlies in and around Glacier National Park means the bear may come off the endangered species list. But more bears mean more confrontations with humans. 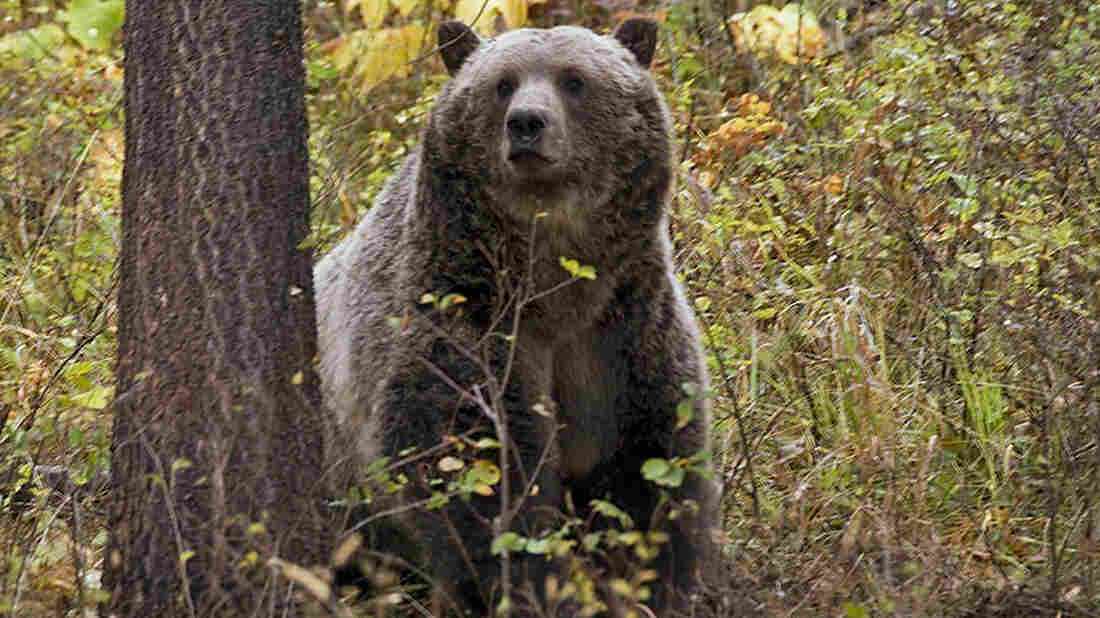 A sow grizzly bear spotted near Camas in northwestern Montana. Wildlife officials endorsed a plan in August to keep northwestern Montana's grizzly population at roughly 1,000 bears as the state seeks to bolster its case that lifting federal protections will not lead to the bruins' demise. Montana Fish and Wildlife and Parks, via AP hide caption

toggle caption
Montana Fish and Wildlife and Parks, via AP 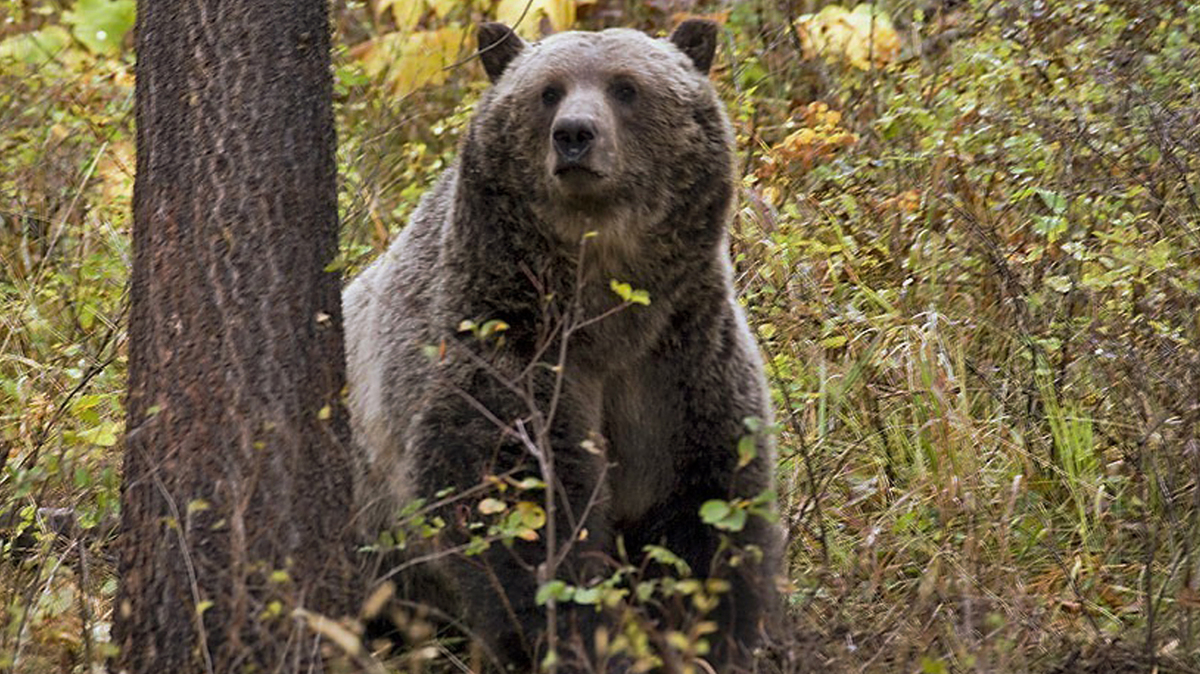 A sow grizzly bear spotted near Camas in northwestern Montana. Wildlife officials endorsed a plan in August to keep northwestern Montana's grizzly population at roughly 1,000 bears as the state seeks to bolster its case that lifting federal protections will not lead to the bruins' demise.

Montana Fish and Wildlife and Parks, via AP

A record number of grizzly bears are being killed by cars as they roam the roads in and around Glacier National Park in northwestern Montana. At the same time, they're causing an unprecedented amount of damage to crops and livestock.

The grizzly has been federally protected since 1975, but last year the Trump administration took a different population of grizzlies — the Greater Yellowstone grizzly — off the endangered species list, arguing that the population had recovered. The first grizzly hunt in the lower 48 in decades was slated to begin in Idaho and Wyoming on Sept. 1.

But last week a federal judge in Missoula put a temporary, two-week hold on the hunt. The judge is considering a number of lawsuits challenging the decision to remove federal protections from the Yellowstone grizzlies.

A decision to de-list the Northern Continental Divide Ecosystem grizzly is expected by the end of the year. The judge's decision in the Yellowstone grizzly case could shape the way officials proceed in Montana.

Regardless, if a decision to delist in Montana is made, the government is likely to face a slew of lawsuits. Keith Hammer is chair of a Montana wildlife organization called Swan View Coalition. He says those federal protections are crucial to managing the population of bears around Glacier. "It will unwind so fast it will make your head spin if they remove Endangered Species Act protection," he says.

Kari Eneas is a wildlife biologist for the Confederated Salish and Kootenai Tribes on the Flathead Reservation in Northwest Montana. She's one of a group of researchers and game officials learning how to keep bears alive and how to mitigate confrontations between bears, cars and ranchers.

Standing in the back of a pickup truck, she's stirring a curdling stew of severed deer legs in a big, red plastic bucket. The stew will become bait for a grizzly.

"Well I've been tracking the stages of the bait barrel and there was one stage that I deemed sulphurous and I think this has ... kind of got a hint of old shoe?"

She fishes a smelly roadkill leg out of the barrel and places it in a giant metal cylinder. Stinky sneaker to us, the odor signals a tasty treat to a grizzly. 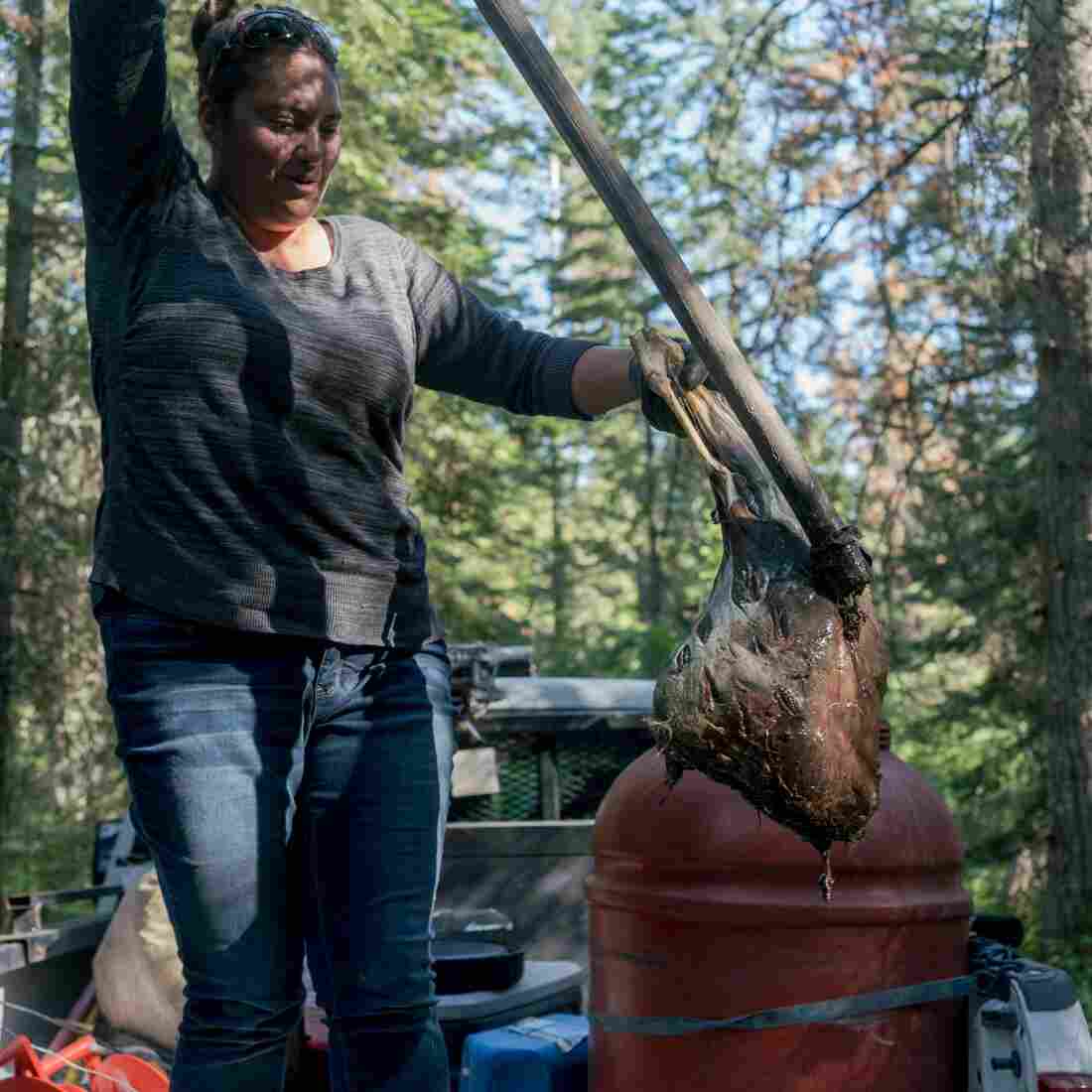 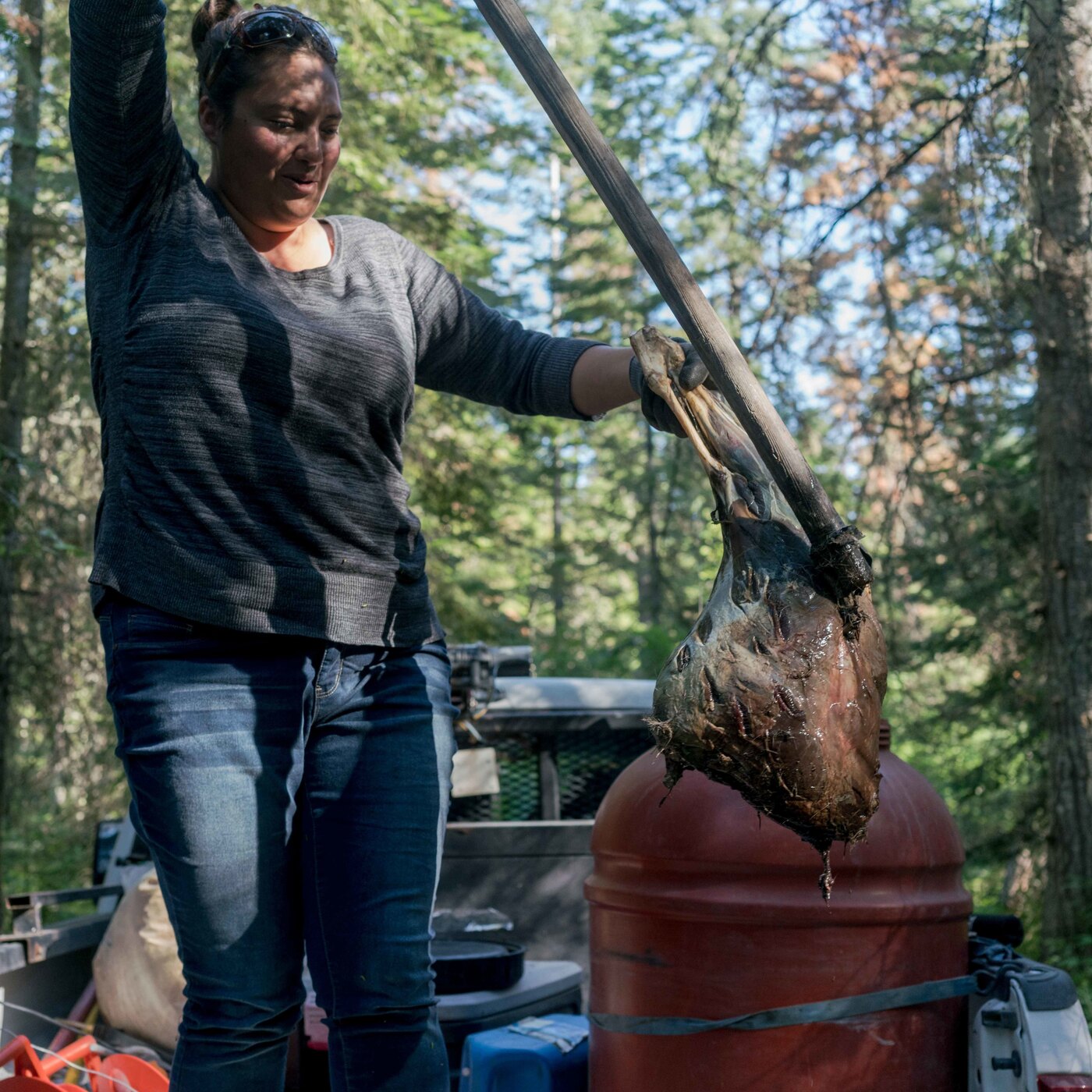 Kari Eneas, a wildlife biologist for the Confederated Salish and Kootenai Tribes, fishes a deer leg out of the "bait bucket" in Montana's Mission Valley.

Eneas hopes a bear will crawl in here to get its snack, and then the device will slam shut, trapping the grizzly inside. Eneas and her co-workers will sedate the grizzly, slip a high-tech collar over its neck and let it go.

"With the collar data, we can get GPS locations," Eneas says.

With this data, biologists can start to figure out where the bears are crossing roads, and why more bears than ever before are being killed by vehicles. In a normal year in this area, there are three bear deaths on roads. This year already there have been 10 killed, and another four cubs euthanized or relocated.

Montana's transportation department has built dozens of "crossing structures" or underpasses that allow wildlife to safely get to the other side. But what researchers are finding about bear movements is striking.

"We're seeing a lot more females going west across Highway 93 with cubs, and they're not using crossing structures," says Stacy Courville, another wildlife biologist for the Confederated Salish and Kootenai Tribes. Highway 93 shoots north from Missoula up to Flathead Lake and Glacier National Park, both major tourist attractions.

The bear population is growing here, but so is the human population. For each of the past four years, Glacier saw its most visits in history. Tourism is driving millions of dollars into the Montana economy. But it's also driving people into bears.

On an average year, 23 bears are killed or relocated among the grizzly population around Glacier. This year, that number is already up to 30. Officials expect a boom in mortality in the fall as bears venture closer to homes while loading up on calories for the winter.

"It's really not that unexpected," says Hilary Cooley, the grizzly bear recovery coordinator for the U.S. Fish and Wildlife Service. "Because our distribution is expanding, the number of bears is growing. We would expect mortalities to grow in proportion to that too."

Cooley says the population around Glacier National Park, which contains an even larger number of bears than the Yellowstone area, is healthy and strong. She says they are hoping to complete an evaluation of whether delisting is warranted by the end of the year.

If these are removed, the state will manage the bear population. She says state officials are best suited to manage conflicts as the bear's range expands.

"More and more farmers and producers are experiencing bears that they haven't been for many years," Cooley says. 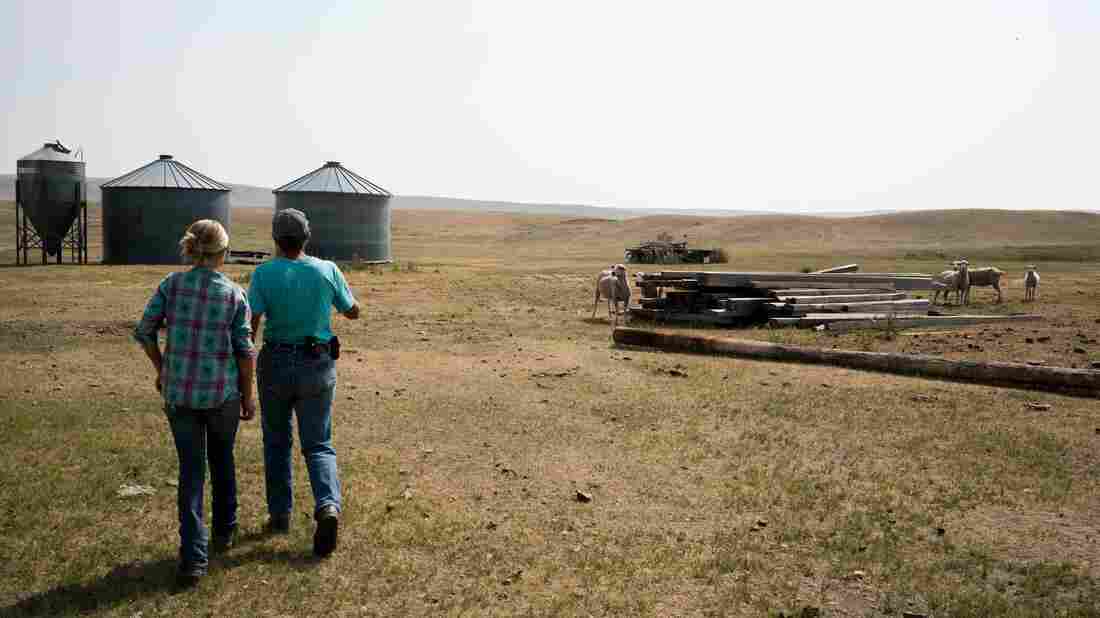 Lisa Schmidt (right) and her daughter Abby Hutton (left) at the Graham Ranch near Conrad, Mont. Grizzlies have killed livestock on their ranch.

Lisa Schmidt is a rancher in the plains east of Montana's Rocky Mountains. She lives in an area about 50 miles from the sprawling Bob Marshall Wilderness. But out at her ranch, she's surrounded by plains and rolling hills, not mountains. One day, about seven years ago, she lost more than a dozen animals to a grizzly.

"I walked down to the corral at about 5 o'clock in the morning, and there were dead sheep laying everywhere," she says.

To bears, sheep are like little potato chips, dotting the plains. Last year, a Montana board that compensates ranchers who lose animals to large predators doled out more money than they ever have for grizzly kills.

The land around Schmidt's ranch is all used for agriculture. She says she never expected to deal with bears when she moved to this area.

"I was thrilled with the prairie and the coulees, and the different vegetation, which of course bears like," she says.

Grizzlies feed off apple trees and dog food left out on the porch. They curl up in the shade of trees around homes. They rip doors off enormous grain bins. They'll even take chunks out of cornfields.

A little over a year ago, another grizzly showed up right outside Schmidt's front door. She scared the bear off, but Schmidt's family remembers the incident well.

"That was really scary for me and I didn't like that," says Schmidt's daughter, Abby Hutton.

She thinks, if delisted, more strict management of the grizzly population – including limited hunting — can give her some peace of mind.

There's a place for grizzlies. It's just not in my yard.

"There's a place for grizzlies," she says. "It's just not in my yard."

"Ranchers and farmers often get pegged as anti-bear or anti-wolf," he says. "But that's really not the case. It's not black and white."

In fact, a sow and two cubs live on the other side of Schmidt's property. She's OK with those grizzlies, she says, since they're scared of people. They keep mostly to themselves.

Since the grizzly attack, Schmidt has gotten guard dogs to help scare bears away. Sarmento expects to help install electric fence around her corral in the coming weeks. So even if takes some change, Schmidt and her daughter recognize they'll have to learn how to live with bears out here on the prairie.