Accessibility links
Rise Of LGBTQ Candidates Could Usher In A 'Rainbow Wave' In 2018 There were a record 430 lesbian, gay, bisexual and transgender candidates this year running for office at every level of government, almost entirely on the Democratic side. 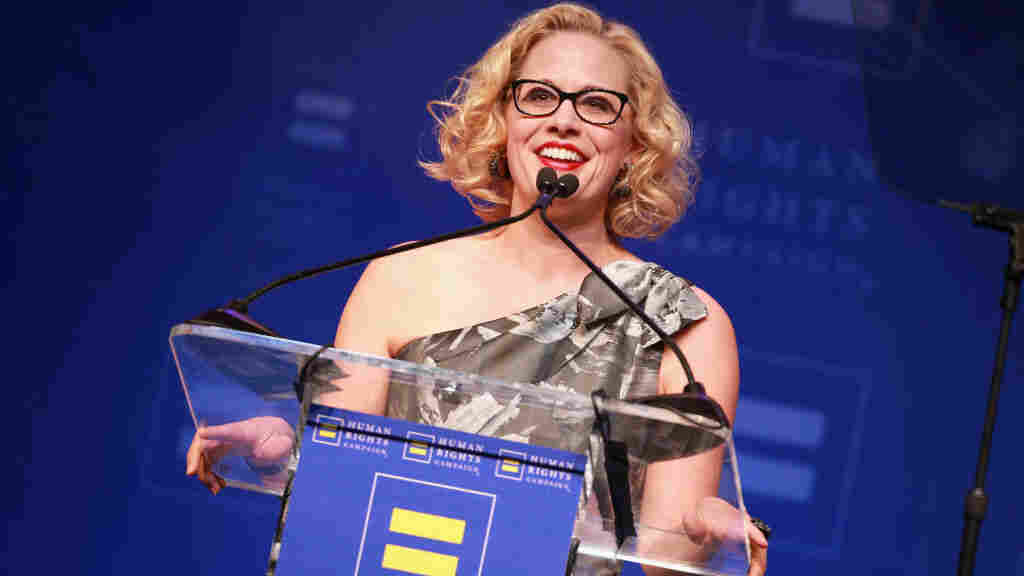 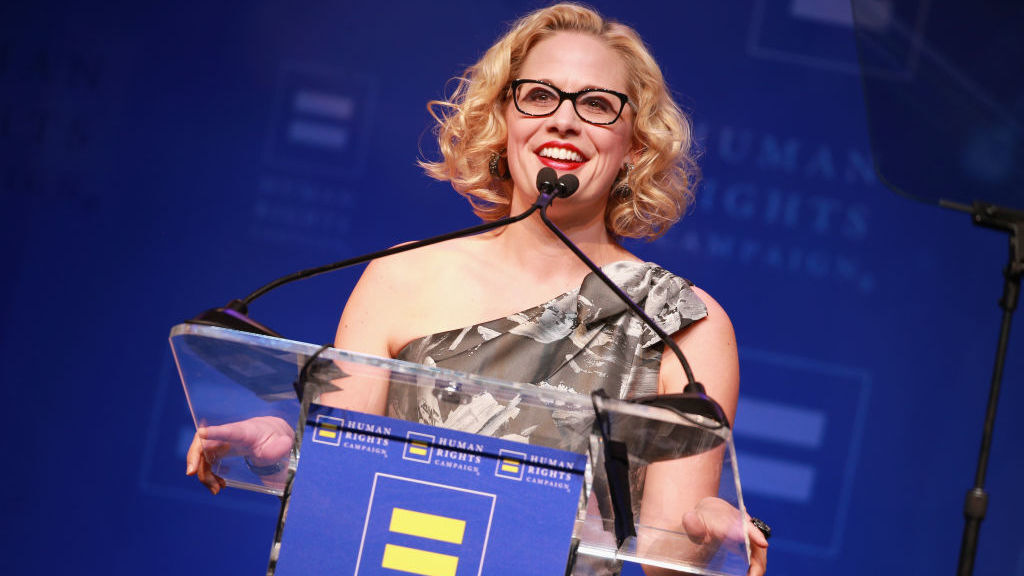 Democrats have a lot of diverse candidates running this year — a record number of women, African Americans and Native Americans running in high-profile races that they hope could lead them to a blue wave. But there's also been a surge of lesbian, gay, bisexual and transgender candidates all across the country who want to give that blue wave a rainbow tinge.

"I think candidates are running because they see it's possible. They see the need for more LGBTQ candidates to get involved in the process. But they now see clear evidence that we can win at the very highest levels of government," said Victory Fund President Annise Parker, whose group endorses viable LGBTQ candidates. Parker was the first openly LGBTQ mayor of a major U.S. city when Houston voters elected her in 2009.

According to their data, 430 openly LGBTQ candidates this year have run for office at every level of government. Many say they've been pushed off the sidelines, fearing their rights are under attack. Three years after the Supreme Court legalized gay marriage, they now see the Trump administration working to bar transgender people from serving in the military and promoting religious freedom laws the LGBTQ community says would legalize discrimination.

Currently, there are only six out LGBTQ House members and only one lesbian senator, Wisconsin's Tammy Baldwin who's running for re-election. Baldwin could be joined by Arizona Rep. Kyrsten Sinema, who's bisexual and just won the Democratic nomination for Senate in one of the most competitive races this year.

There will be at least 22 LGBTQ candidates on the ballot for House seats this fall — several in highly competitive districts that will determine control of the House. Among the Democratic Congressional Campaign Committee's "Red To Blue" candidates — those with the best shot of flipping a GOP-controlled House seat — there are five LGBTQ candidates who have a viable shot of being elected in November. And with half of the current LGBTQ lawmakers in the House running for higher office, these candidates could replenish or add to their ranks.

One of those candidates is Angie Craig, running in Minnesota's 2nd District in the suburbs of the Twin Cities against GOP Rep. Jason Lewis, who she lost narrowly to in 2016. If elected, Craig would be the first LGBTQ mom ever to serve in Congress, and her campaign ads feature her wife, Cheryl, and their four sons.

"I'm not running because I would be the first lesbian mom, but that's pretty cool I would be," Craig told NPR in an interview.

Craig's journey to become a mom is part of what drove her to run for office. When she and her then-partner were living in Tennessee and decided to adopt a baby, she was caught in a three year legal battle after the birth mother's parents sued to challenge their fitness to raise a child. Today, her son Josh is 20.

"It probably is the thing that has shaped my life the most," Craig said. "When you get up every single day for news and you don't know whether you're going to be able to put your son to bed that night. Certainly it makes you unafraid of anything and I think, you know I when I'm running for Congress I always remember no matter how tough it gets it'll never be anything more difficult than what I faced back in Tennessee."

That theme of struggle is something other LGBTQ candidates have cited as reasons why they're running this year.

Christine Hallquist made history when she won the Democratic gubernatorial nomination in Vermont. She's the first transgender person ever to win a major party's nomination for governor.

Hallquist is one of four LGBT Democratic nominees for governor running this cycle — in fact, they represent every part of that acronym. Lupe Valdez in Texas is lesbian, Rep. Jared Polis in Colorado is gay and incumbent Oregon Governor Kate Brown — the first openly LBGTQ person ever to win a governor's race — is bisexual.

In an interview with Morning Edition after her victory, Hallquist recalled how difficult her transition had already been — harder than anything she might face in the campaign or if she is elected governor.

"I dealt with not being authentic my whole life," she told NPR's David Greene. "And now that I'm through it and looking back, you know, it's a joy to be where I am today. But it's really hard for folks. And transitioning was clearly the hardest thing that I could ever imagine doing."

Other candidates, like Rufus Gifford, who is running on Tuesday in a crowded Democratic primary for an open seat in Massachusetts's 3rd District, talk about the discrimination he faced after coming out as gay.

Gifford served as U.S. ambassador to Denmark under President Obama, but the 2016 election aftermath spurred him to put his own name on the ballot. He remembers watching other people run for office when he was a teenager, but there weren't role models for him as he was struggling with his sexuality, something he talks candidly about in a TV ad.

"I hope that sometimes, just by being open and smiling and talking about my life now, that 15-year old version of me may just have a glimmer of hope," Gifford told NPR. "I just think that that's incredibly impactful and matters. I know it would have mattered to me. I would have loved to have seen that. They could have changed my life in a lot of ways."

Rep. Kyrsten Sinema was previously misidentified in a caption as a Republican instead of a Democrat.