Accessibility links
Karin Dreijer Is The 21st Century's Sonic Shapeshifter With a slippery face and a thousand voices, the Swedish artist uses their music in Fever Ray and The Knife to pull into frame what society would prefer stay hidden. 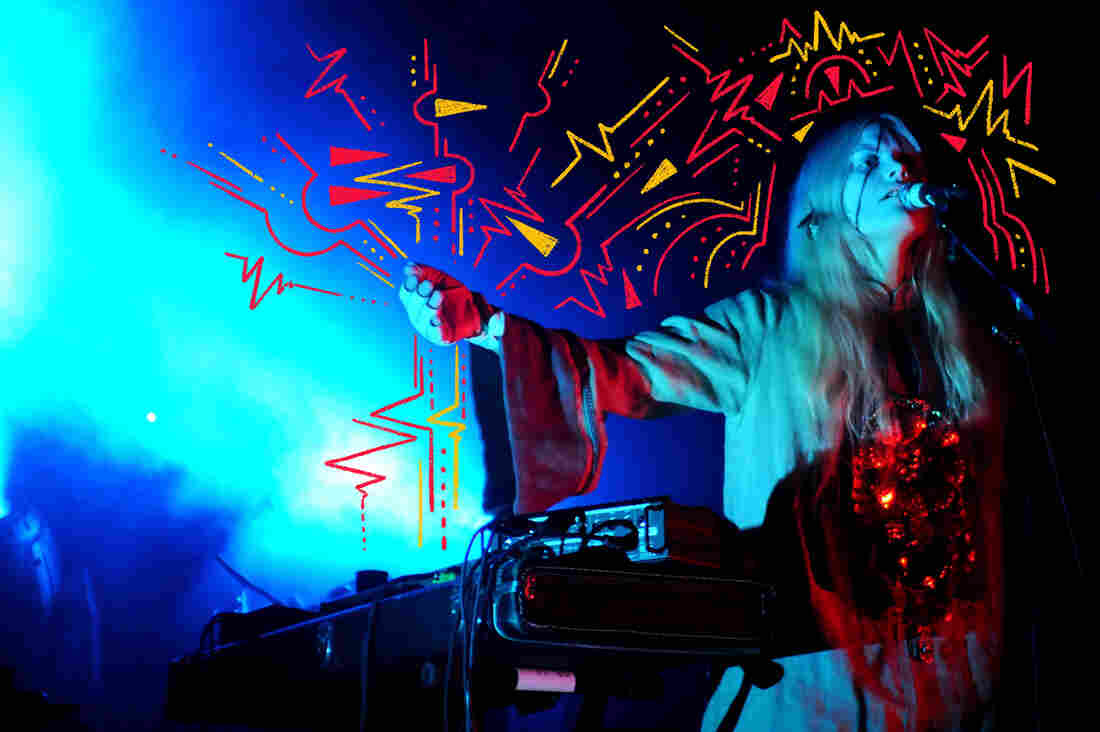 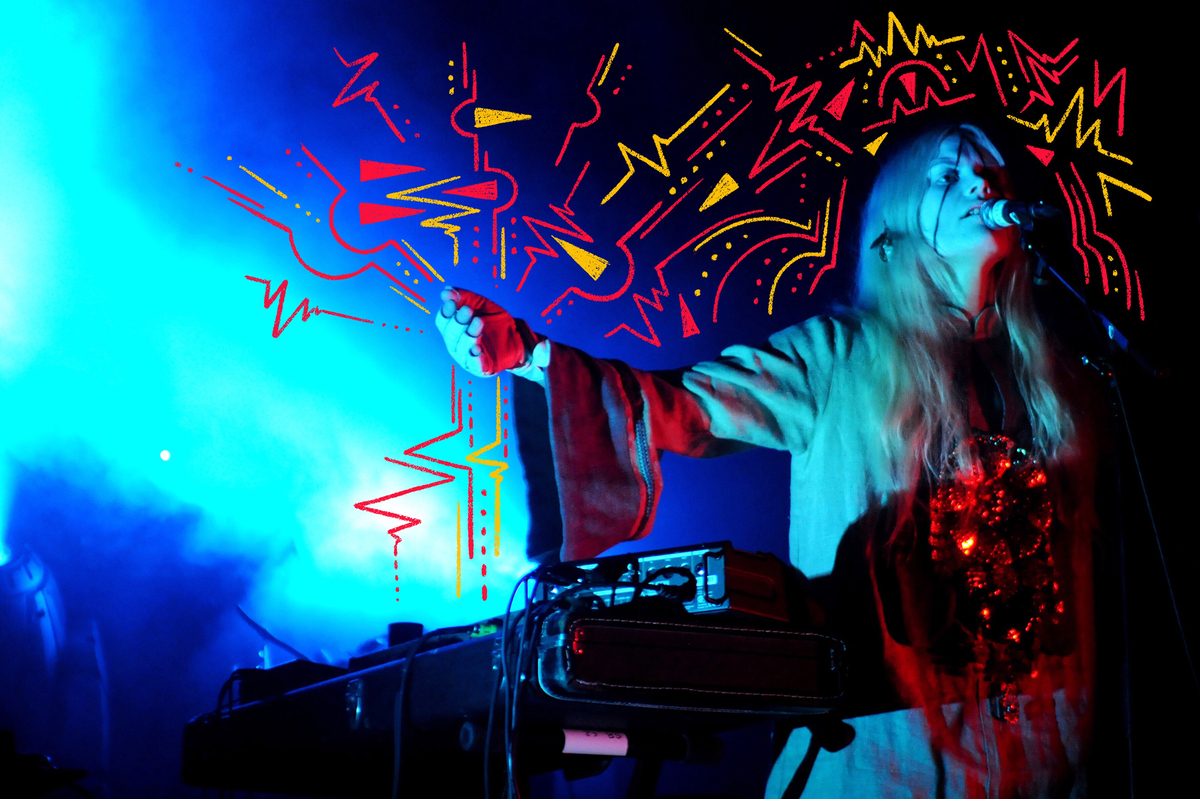 Karin Dreijer performs on stage at Motel Mozaique Festival in the Netherlands in 2009.

Karin Dreijer has a slippery face and a thousand voices. These are necessary tools in the act of wriggling away from conformity's grasp, especially within an industry — within a society — that is intent on pinning every last person down. If fluidity is the goal, fixity must be avoided at every turn.

It's an approach the Swedish artist has perfected with their solo project Fever Ray, but it has its roots in The Knife, the group they formed with their brother Olof Dreijer at the cusp of the new millennium. While relatability has become pop's default mode over the past 15-odd years, a position cultivated by social media, The Knife was always more interested in the potentiality of getting weird. Yes, the duo made bangers, but it also wrote an opera about Darwin's theory of evolution. The siblings' idiosyncratic way of noticing and navigating the world earned them fans and accolades, but they eventually called it a day in 2014 after five studio albums and half a dozen other intriguing projects.

The canon would have us believe that 2006's Silent Shout is the album on which Dreijer first pitch-shifted into a non-binary multi-person, forever turning the sound of Top 40 radio inside out along the way. But that take indicates a skim listening of The Knife's 2003 second album, Deep Cuts. Between the poppier songs on the record, Dreijer debuted their vocal malleability and with it their frustration with the patriarchy. "I keep my dick hanging out of my pants / So I can point out what I want," they sing on "Hangin' Out," their voice altered to make them sound like one of the boys. There's humor there, but also exhaustion; the song is cut short after only one verse when Dreijer interrupts their singing to say "Näe, vi stoppar där" ("No, we'll stop there.") Elsewhere, a low tone and sloth-like delivery foreshadow their form on Fever Ray ("She's Having A Baby"), and the assumed voices of a handful of children and adults help them paint a picture of societal paralysis ("You Make Me Like Charity"):

These experiments opened the door for Silent Shout and its cacophony of voices to cartwheel through. Among them are android whispers, gremlin theatrics, silken tones and a simulated mob. "One of the ideas that I wanted to play with was to be a character that you can't place," Dreijer told journalist Owen Myers in 2016, in an interview celebrating the record's 10th anniversary. "What happens when a listener can't place a vocal? What is it? Now, we're much more open to not having to decide what gender a vocal belongs to. In a way, it was very free."

If a character can't be placed, it is able to move as it wishes. Dreijer uses this mobility to pull into frame what society would prefer stay hidden. On "Na Na Na," they make a play on so-called feminine protection, dedicating one verse to the tampons that will protect them from their own blood, and the other to the mace and pepper spray they hope will protect them from potential rapists. With such multifaceted force, Silent Shout kicked pop into the 21st century. How one could behave in such a public setting was suddenly up for grabs. What are you burning to say? How do you want to say it? Who do you want to be today?

The Knife On 'Shaking' Expectations

As the music industry ripped open The Knife's gift — everyone from Lady Gaga to Grimes found new ground with the playbook they wrote — Dreijer was conversely sinking into mud. In-between the release of Deep Cuts and the year following Silent Shout, they gave birth to two daughters, which turned Dreijer's previously independent life upside down. They've spoken at length about the suffocating constraints that society's idea of motherhood places on women, but to really feel what they mean you just need to listen to Fever Ray. Released in 2009, their self-titled debut solo album weaves an insular world characterized by a sense of stuckness. "On a bed of spider web / I think of how to change myself," they sing on "Keep The Streets Empty For Me." Vocally, their range is much tighter across Fever Ray, spanning deep, hoarse layers to a sleepy croak, while lyrically they examines the domestic space and its insistence on homogeny. Suburban living, suggests "When I Grow Up," is numbing: "You've got cucumbers on your eyes / Too much time spent on nothing / Waiting for a moment to arise."

Breaking from the largely animated video approach The Knife had taken up until this point, it was in the visuals for Fever Ray that Dreijer found fresh kinetic energy. In contrast to the routine of parenthood, the home life that Dreijer depicts on camera bubbles and boils with all manner of aberrations, from a pagan encounter in a stable with a bunch of farm animals to a spirit-summoning ritual in front of a swimming pool. In some of their videos, a variety of women of different ages and races stand in and lip-sync for Dreijer, while in others Dreijer appears in a shamanic guise, their face daubed in white paint or made up to look like a skeleton. These motifs, both visual and sonic, helped feed the then-burgeoning micro-genre of witch house, which was pregnant with the themes that would later characterize excessive internet use: isolation, loneliness, a desire for tribal community.

One of things that makes Dreijer's musical contributions so influential, outside of the potency of the material itself, is that their career has been marked by long periods of silence and uncertainty. (Dreijer recently cancelled a Fever Ray tour, citing a long struggle with anxiety.) In an overcrowded marketplace, scarcity goes a long way. But beyond that is the simple fact that evolution — and healing — takes time. The chrysalis must be built, DNA recoded, new languages invented. It took eight years and two wildly experimental Knife albums (the latter of which pushed Karin and Olof's intersectional feminist, anti-capitalist, and environmental politics to the fore, in both artistic and practical terms) for Dreijer to re-emerge as Fever Ray in the fading light of 2017. And they couldn't have performed a more startling shapeshift: a bald head, high-shine skin, lips and eyes bleeding their color into Dreijer's pores. The effect is somewhere between performance artist boychild and Uncle Fester, echoing their respective androgyny and manic glee.

Where Fever Ray wallowed in unfulfilled longing, Plunge provides the gratuitous payoff. It's a visceral celebration of freedom, and is based on Dreijer's experience of exploring their sexuality as a gender-fluid queer person, post-divorce to the father of their daughters six years ago. In the high-energy scrawl of their finally unfiltered voice, Dreijer articulates lust the way it is felt on the inside: wet and charged and squirmy and full of heat. The body has always been central to pop — it desires a face to look up to, a thrust to thirst over — and yet the body has also been censored by pop. Who and what is sexy has long been decided by the patriarchy. On Plunge, Dreijer stuffs those rules in a blender, as outlined in the beautiful foreword to the album they commissioned artist Hannah Black to write. Alongside the "chosen family" of queer characters they sing of on "A Part Of Us," Dreijer delights in skewering representations of sexuality in song and on screen. "My curiosity / Found a cavity / And something to stick in," they sing with sensual gravity on "Mustn't Hurry." The visuals that accompany the album radically extend the range of movement of the human body in pop: We see a variety of femme figures peeing, spitting and licking. With such electrifying choreography, Dreijer invites new fantasies into the often-stale music video realm, and more importantly, Dreijer keeps on moving. The vocal experiments of their early work might have paved the way for their rebirth, but it's their unwavering curiosity that will keep them reaching for new and ever-more fertile forms of expression. As Dreijer told The New York Times, "I like to try things. I don't want this old story of love that I have been told. I want something else."

Update on Nov. 26, 2019: This piece has been updated to reflect Karin Dreijer's gender pronouns. Dreijer previously used "she" and "her" pronouns; Dreijer's pronouns are now "they" and "them."