Accessibility links
Kavanaugh Supreme Court Confirmation Hearings Off To A Raucous Start Nominee Judge Brett Kavanaugh sought to portray the high court as nonpartisan. "The justices on the Supreme Court do not sit on opposite sides of an aisle," he said Tuesday. 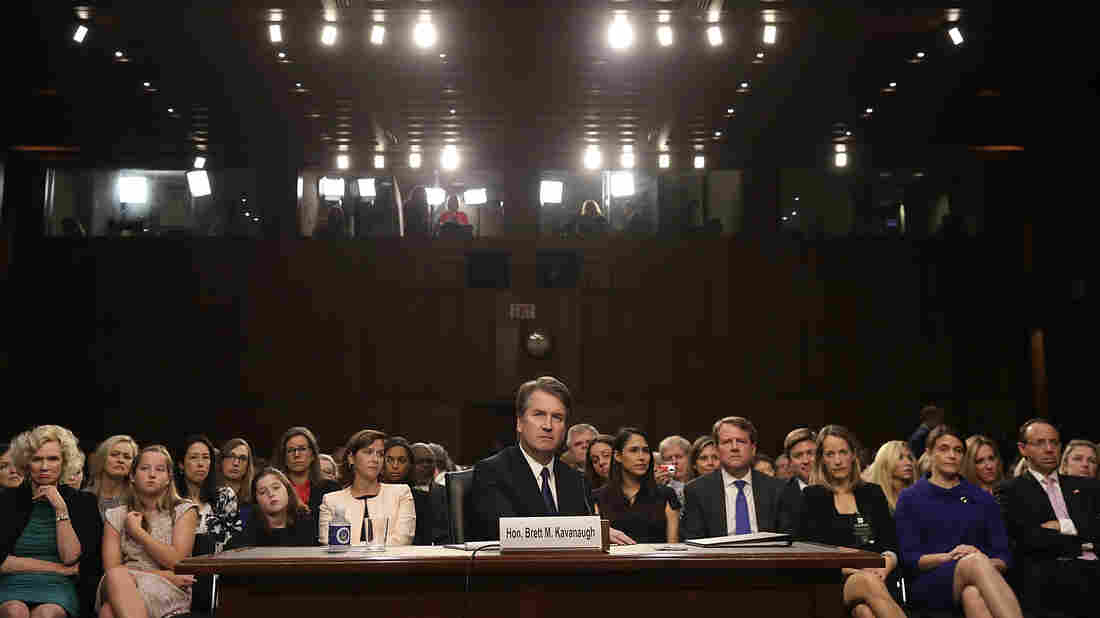 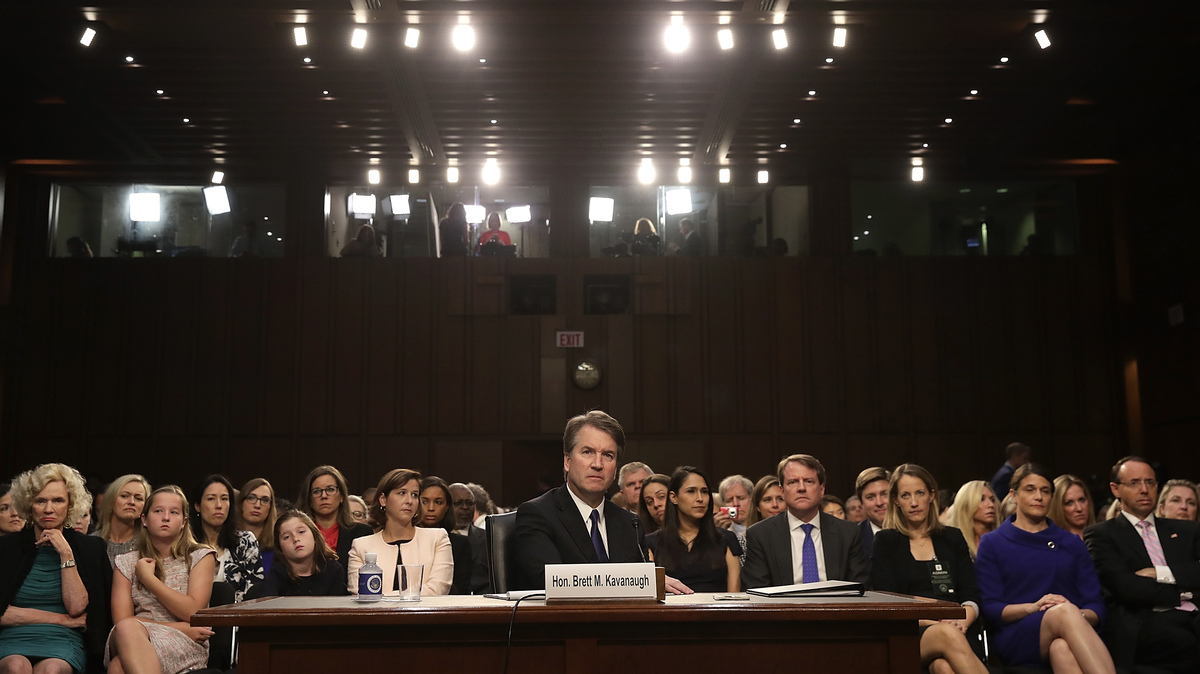 The hearing proceeded despite Democrats' call for delay. Republicans, who control the Senate, hope to confirm Kavanaugh in time to join the high court when its fall term begins next month, cementing a 5-4 conservative majority.

At 53, Kavanaugh would be the second-youngest member of the court and the second appointed by President Trump.

Sen. Chuck Grassley, R-Iowa, who chairs the Judiciary Committee, described Kavanaugh as one of the most qualified nominees he has ever encountered. The Yale law school graduate has spent 12 years on the federal appeals court in Washington, D.C., where he has authored hundreds of opinions.

In his opening statement, Kavanaugh praised retired Justice Anthony Kennedy, for whom he once clerked and whose seat he would fill, as well as another judicial hero — his mother.

"My mom taught me that judges don't deal in abstract theories; they decide real cases for real people in the real world," Kavanaugh said. "And she taught me that good judges must always stand in the shoes of others."

Before Kavanaugh spoke Tuesday evening, the hearing was repeatedly interrupted by protesters.

"What we've heard is the noise of democracy," said Sen. Dick Durbin, D-Ill.

In a statement Tuesday evening, the U.S. Capitol Police said a total of 70 people were charged in connection with protests at Tuesday's hearing.

Sen. Dianne Feinstein, D-Calif., the top Democrat on the committee, warned that Kavanaugh would tilt the high court to the right, especially on hot-button issues such as abortion and gun control.

"The president that nominated you has said, 'I will nominate someone who is anti-choice and pro-gun.' And we believe what he said," Feinstein said.

"The question is really do you believe that it's correct law," Feinstein said.

Sen. Lindsey Graham, R-S.C., scoffed at Democrats who complained that Kavanaugh is too partisan.

"You had a chance and you lost," Graham said, referring to the 2016 presidential contest. "If you want to pick judges from your way of thinking, then you better win an election."

Trump also chimed in via Twitter, calling the hearings "a display of how mean, angry, and despicable the other side is." Trump charged that Democrats "will say anything, and are only looking to inflict pain and embarrassment to one of the most highly renowned jurists to ever appear before Congress."

....looking to inflict pain and embarrassment to one of the most highly renowned jurists to ever appear before Congress. So sad to see!

Kavanaugh himself, however, pushed back against the idea of the Supreme Court as a partisan institution.

"The justices on the Supreme Court do not sit on opposite sides of an aisle," he said. "If confirmed to the Supreme Court, I would be part of a Team of Nine, committed to deciding cases according to the Constitution and laws of the United States."

Democrats also complained that the Trump administration blocked the release of more than 100,000 pages of documents detailing Kavanaugh's service in the George W. Bush White House. Other documents were released at the last minute, or not at all — including documents from 2003 to 2006 when Kavanaugh served as Bush's staff secretary.

"There's a 35-month black hole in your White House career where we've been denied access to any and all documents," Durbin said. "During that period of time, President Bush was considering same-sex marriage — an amendment to ban it — abortion, executive power, detainees, torture, Supreme Court nominees, warrantless wiretapping."

"Before sitting on the bench, you were a political operative, involved in the most political and partisan controversies of our time," added Sen. Patrick Leahy, D-Vt. "It is precisely those views that are being hidden from us today."

"I would think that anyone who wanted to sit on the nation's highest court would be proud of their record and would want the American people to see it," said Sen. Kamala Harris, D-Calif. 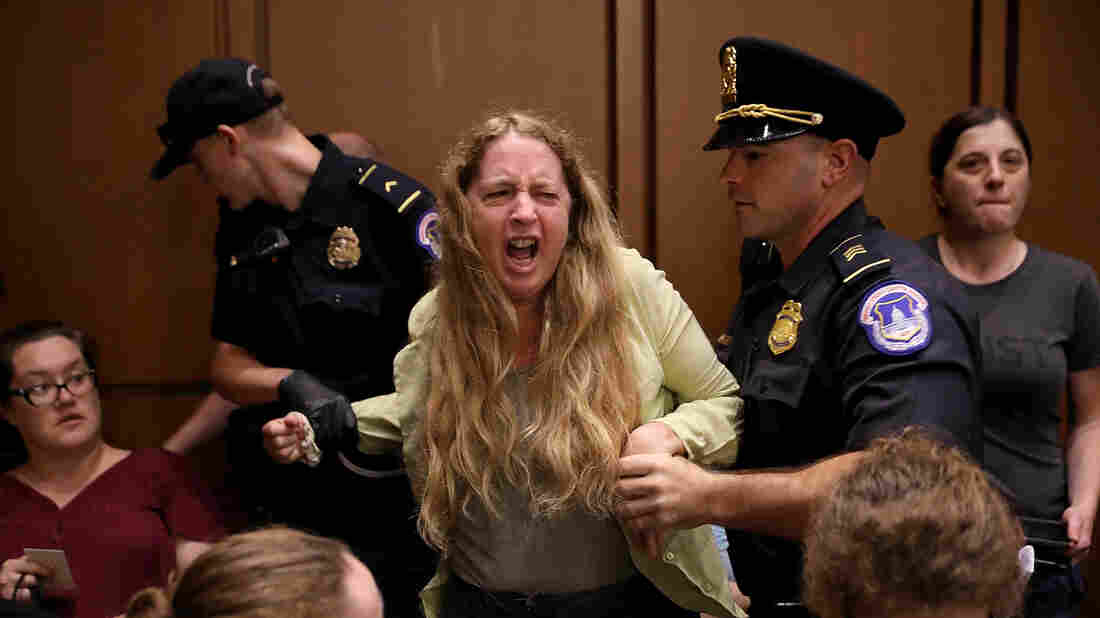 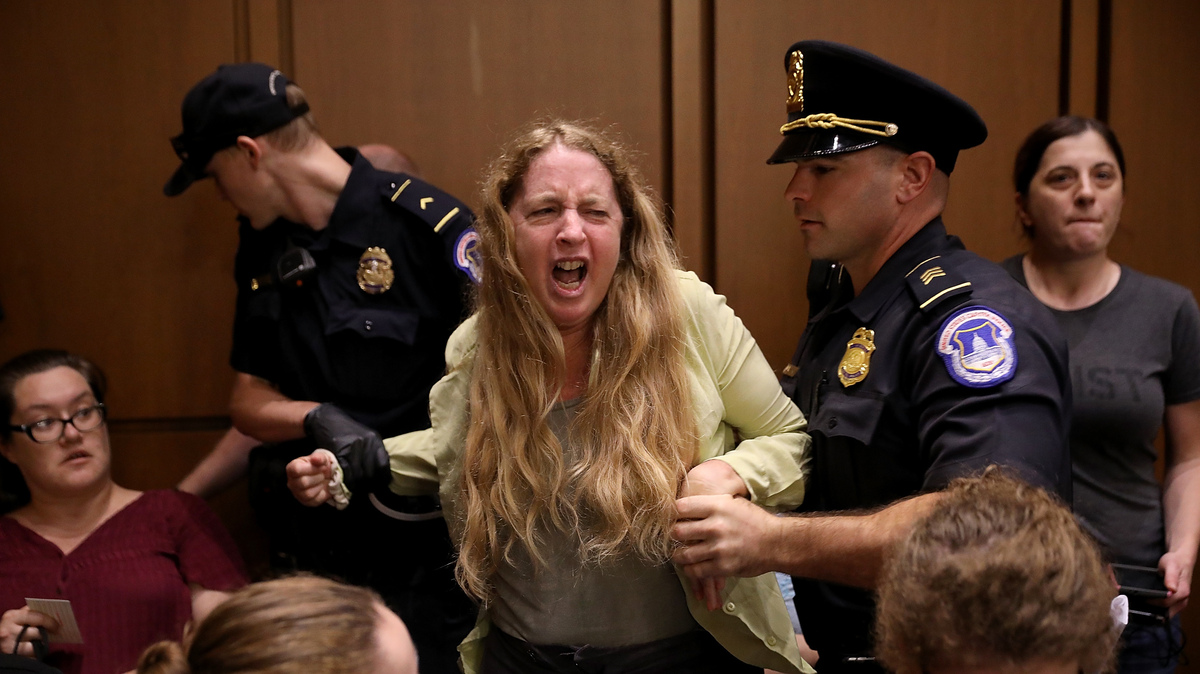 Sen. Ted Cruz, R-Texas, dismissed the complaints over missing documents as a distraction.

"Their motives are clear," Crapo said. "Use any means available to attempt to delay the confirmation process of a well-qualified jurist, fit for the job, indefinitely."

During his confirmation hearing for the appeals court in 2006, Kavanaugh assured Durbin that he had not been involved in White House discussions of torture or the treatment of enemy combatants. NPR and the Washington Post later reported that Kavanaugh was involved in those discussions, offering counsel on how those policies might be judged by the Supreme Court.

"You are a committed textualist, Judge Kavanaugh," Durbin said. "If you are going to hold others accountable for their words, you should be held accountable for your own words."

Although Kavanaugh helped to investigate then-President Bill Clinton while working for independent counsel Kenneth Starr in the 1990s, he later wrote in a 2009 law review article that presidents' official duties are too demanding for them to be subject to such a probe.

"I believe it is vital that the President be able to focus on his never-ending tasks with as few distractions as possible," Kavanaugh wrote. He suggested that Congress excuse the president from both civil lawsuits and criminal investigations while in office.

Feinstein takes issue with that approach.

"He does not believe a sitting president should be investigated or prosecuted," she told reporters on a conference call last week. "In other words, the president is above the law."

Democrats say Kavanaugh's views on presidential immunity deserve special scrutiny now, given the ongoing investigation into Russian interference in the 2016 election by special counsel Robert Mueller, which has already implicated a number of Trump associates.

"This is a president who has shown us consistently that he is contemptuous of the rule of law," Durbin said at Tuesday's hearing, noting Trump's firing of former FBI Director James Comey and his repeated criticism of Attorney General Jeff Sessions.

"And it's that president who has decided you are his man. You're the person he wants on the Supreme Court," Durbin said. "So are people nervous about this? Are they concerned about it? Of course they are."

"We have to confront an uncomfortable but important question," Sen. Chris Coons, D-Del., added: "Whether President Trump may have selected you, Judge Kavanaugh, with an eye towards protecting himself."

Two Republican members of the committee who often criticize the president agreed that judicial independence is a particular concern in the Trump era, though they seemed less skeptical of Kavanaugh than did their Democratic colleagues.

Sens. Jeff Flake, R-Ariz., and Ben Sasse, R-Neb., both pointed to Trump's tweet on Monday criticizing the Justice Department over the indictments of two "popular" Republican lawmakers, just ahead of the midterms.

Two long running, Obama era, investigations of two very popular Republican Congressmen were brought to a well publicized charge, just ahead of the Mid-Terms, by the Jeff Sessions Justice Department. Two easy wins now in doubt because there is not enough time. Good job Jeff......

"That is why a lot of people are concerned about this administration, and why they want to ensure that our institutions hold," Flake said.

"The comments from the White House yesterday, trying to politicize the Department of Justice, they were wrong and they should be condemned," Sasse added. "And my guess is that Brett Kavanaugh would condemn them."

Kavanaugh, who serves alongside Garland on the Court of Appeals for the D.C. Circuit, spoke highly of his colleague, describing Garland as "superb" in his opening statement.

Despite their concerns, Democrats have few tools to block Kavanaugh's path to the high court. A rule change last year allows the Senate to confirm a Supreme Court nominee with a simple majority vote.