Accessibility links
Chicago Mayor Rahm Emanuel Not Seeking Re-Election The former congressman and White House chief of staff will not seek a third term in office in 2019. "This has been the job of a lifetime, but it is not a job for a lifetime," he said. 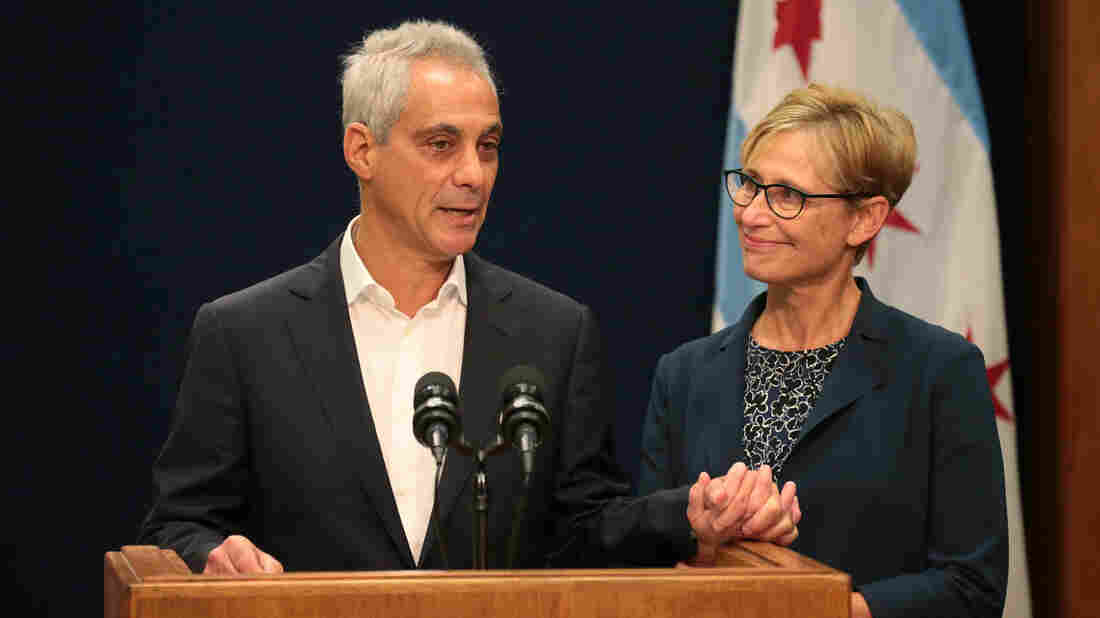 With wife Amy Rule by his side, Chicago Mayor Rahm Emanuel announces Tuesday at City Hall in Chicago that he will not seek a third term in office. Stacey Wescott/Chicago Tribune/TNS via Getty Images hide caption 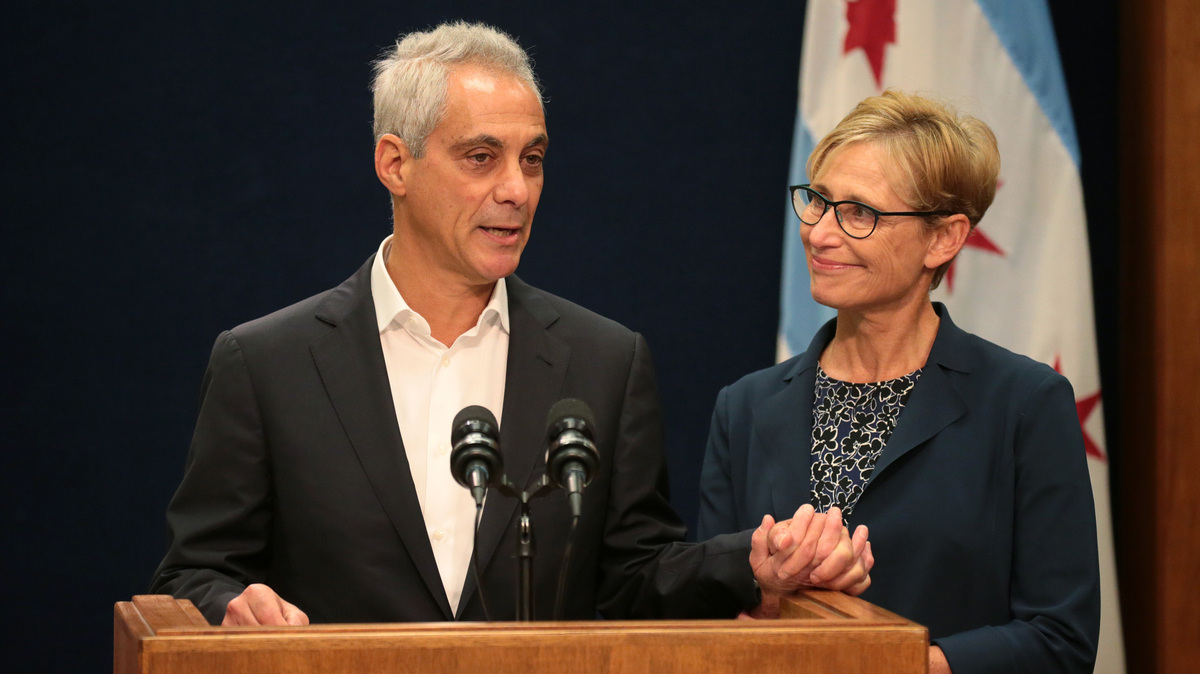 With wife Amy Rule by his side, Chicago Mayor Rahm Emanuel announces Tuesday at City Hall in Chicago that he will not seek a third term in office.

In a surprise announcement on Tuesday, Chicago Mayor Rahm Emanuel said he will not be seeking a third term in office in the 2019 election.

Emanuel, a former congressman and White House chief of staff, has come under heavy criticism in recent years for an increase in gun violence in the city and tense police-community relations as a result of police shootings. He has also struggled to get a handle on rising pension debt.

But the announcement that he is walking away from the mayor's office is a political stunner.

In a news conference at his City Hall office, called with short notice after opening a new school year in the city, Emanuel said he has never been one to shy away from tough decisions.

"Today, the time has come to make another tough choice," he said, with his wife, Amy Rule, at his side. "As much as I love this job, and will always love this city and its residents, I've decided not to seek re-election."

"This has been the job of a lifetime," Emanuel added, "but it is not a job for a lifetime."

The 58-year old did not give a reason for his decision to not run for a third term as mayor of the nation's third-largest city. He refused to answer reporters' questions, saying only that he and his wife "look forward to writing that next chapter in our journey together."

Emanuel served as a Democratic congressman, representing a district on Chicago's North Side for eight years before becoming President Barack Obama's chief of staff in 2009.

He stepped down from that job in the fall of 2010 to return home to Chicago to run for mayor after then-Mayor Richard M. Daley, who had been in office for more than 20 years, announced that he would not seek re-election. Emanuel had been one of Daley's top fundraisers and strategists, before working on the 1992 campaign of President Bill Clinton.

Emanuel's two terms in the Chicago mayor's office have been at times tumultuous, with the city struggling with financial problems he inherited from Daley, as well as spikes in deadly gun violence and fraught police-community relations. But Emanuel had a huge campaign fundraising advantage over a dozen announced challengers, and recent polling data suggested he could win re-election.

"It's a political bombshell," says longtime political analyst and Chicago Sun-Times columnist Laura Washington. "And its going to explode the political and leadership landscape for the city of Chicago for a long time to come."

The timing of the announcement was notable, for several reasons.

Former Illinois Gov. Pat Quinn has been pushing for a referendum vote on whether Chicago mayors should have a two-term limit on their time in office. As Reuters notes, Quinn's petition appears to have reached a milestone — enough signatures to be placed on the ballot, at least hypothetically — just a few days ago.

And The Associated Press points out that Emanuel's news conference "comes the day before the start of one of the biggest police-shooting trials in the history of Chicago — the murder trial of police officer Jason Van Dyke."

In 2014, Van Dyke fatally shot black teenager Laquan McDonald. Police reports stated that it was an act of self-defense, but dashcam footage of the shooting, released more than a year later, showed McDonald was walking away from police as Van Dyke shot him.

Emanuel's administration fought efforts to force the release of the video and quickly settled with McDonald's family for $5 million before the family even filed a lawsuit. When a judge ordered the video be released publicly in November 2015, huge protests against the shooting erupted in the city. The trial is expected to put his decisions under scrutiny once more.

"People in many parts of the city believed that he was engaged in a cover-up, that he hid the videotape and hid the circumstances of that shooting until he was re-elected [in 2015]," says Washington, who worked in the 1980s as an aide to late Chicago Mayor Harold Washington. "And some folks said that they would never forgive him for that ... and that would be the big reason why they wouldn't vote for his re-election."

A subsequent Department of Justice investigation found widespread abuses of residents' civil rights, including that Chicago officers "engaged in a pattern or practice of using excessive force, including deadly force," that officers often lied to cover up misconduct, and that the use of excessive force disproportionately affected black and Latino residents.

But even before then, Emanuel struggled to gain many Chicagoans' trust and confidence. He clashed with Chicago Teachers Union leaders when teachers walked out on strike for seven days in 2012, he raised the ire of many parents and community leaders by closing 50 neighborhood schools in 2013, and he increased taxes in an effort to address rising employee pension costs and invest in neglected infrastructure, problems he inherited from his predecessor.

Add to that the feeling among many city residents that they were being left out of an economic boom going on in downtown Chicago during the past several years, while there was relatively little job and economic development in the city's most impoverished neighborhoods.

That anger helped fuel the progressive campaign of Cook County Commissioner Jesus "Chuy" Garcia, who forced Emanuel into a runoff election in 2015.

"The tale of two cities has haunted him since he came into office," says Washington. She says despite Emanuel's efforts to overcome that gap, "he's never been able to be in a position where both sides of the city, the rich and the poor, the privileged and the left out, have felt that he represents all of them."

He is also credited with putting city government on a path toward financial stability, after raising taxes and fees to shore up underfunded employee pension funds, and attracting several major corporations to relocate their headquarters to Chicago. He often boasts that there are more construction cranes operating in downtown Chicago, building more high-rises, than ever before.

Even before Emanuel's stunning announcement, a dozen candidates had announced they would challenge him for the office of mayor in next February's city elections — including an activist, a millionaire businessman, a college student, the former head of Chicago Public Schools, the Cook County Circuit Court clerk and an ex-federal prosecutor who is the former president of the Chicago Police Board. Former police Superintendent Garry McCarthy, whom Emanuel fired after the release of the McDonald shooting video, is also running.

But no one is expected to run away with the race.

And with Emanuel now stepping aside, even more candidates — perhaps with deeper pockets and better name recognition — may now enter the mayoral campaign.