Accessibility links
Kavanaugh Hearings, Day 1: Protesters Focus On Roe; Attempted Handshake Goes Viral There were objections from Democrats, and protests inside and outside the hearing room. Also, a disputed moment between the father of a mass shooting victim and Trump's nominee quickly went viral. 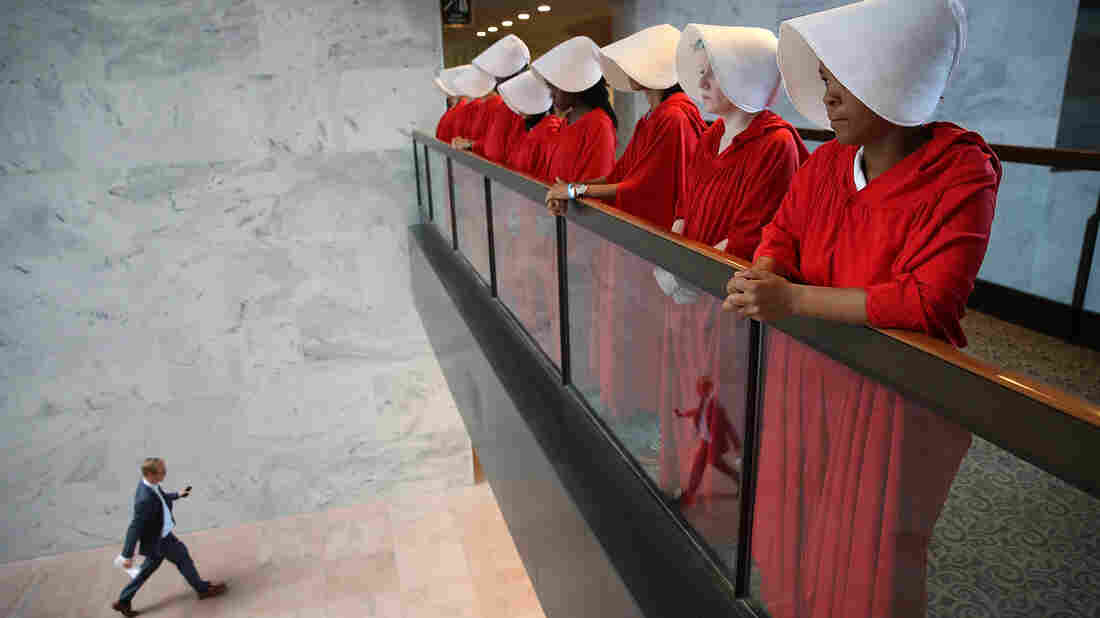 Protesters dressed as characters from The Handmaid's Tale outside the confirmation hearing for Brett Kavanaugh on Tuesday. Win McNamee/Getty Images hide caption 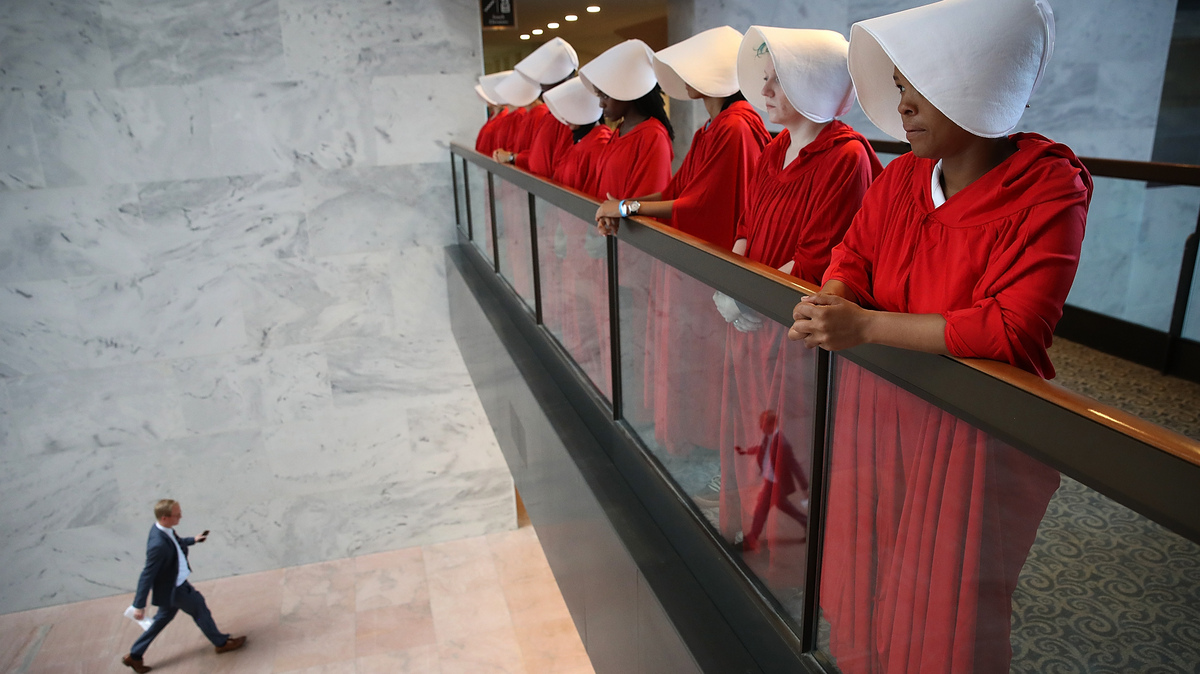 Protesters dressed as characters from The Handmaid's Tale outside the confirmation hearing for Brett Kavanaugh on Tuesday.

The first day of Judge Brett Kavanaugh's Supreme Court confirmation hearings was long on quarreling, protesting and speechifying. While good theater, there was little actually learned about the man whom President Trump has nominated for a lifetime seat on the nation's highest court.

Here are a few takeaways from Tuesday's often contentious session:

1. Democrats came ready for a fight

Being in the minority, Democrats can't do much to stop Kavanaugh's nomination, as long as Republicans remain unified in their support, which so far they have been. So Democrats formulated another strategy: to obstruct and disrupt the proceedings and question the legitimacy of the process. Their weapon was the documents that they say Republicans and the White House have refused to produce. They even came up with the Twitter hashtag #WhatAreTheyHiding.

"Democrats complained that the Trump administration blocked the release of more than 100,000 pages of documents detailing Kavanaugh's service in the George W. Bush White House. Other documents were released at the last minute, or not at all — including documents from 2003 to 2006 when Kavanaugh served as Bush's staff secretary.

" 'There's a 35-month black hole in your White House career where we've been denied access to any and all documents,' Durbin said. 'During that period of time, President Bush was considering same-sex marriage — an amendment to ban it — abortion, executive power, detainees, torture, Supreme Court nominees, warrantless wiretapping.'

" 'Before sitting on the bench, you were a political operative, involved in the most political and partisan controversies of our time,' added Sen. Patrick Leahy, D-Vt. 'It is precisely those views that are being hidden from us today.' "

That's not to say there are no documents. In fact, the White House released some 42,000 on the eve of Tuesday's hearing, but with the caveat that they were "committee confidential," meaning only senators could view them and they would not be released to the public.

Democrats also called for a vote to adjourn Tuesday's hearing, which not surprisingly, Judiciary Committee Chairman Chuck Grassley, R-Iowa, refused to hold. Republican Sen. John Cornyn accused Democrats of attempting "mob rule" on the committee after their frequent interruptions during the morning's proceedings.

2. Committee Democrats weren't the only protesters during Day 1

There were frequent disruptions by demonstrators inside the hearing room, often interrupting the Democrats' interruptions. Many expressed concerns over the fate of Roe v. Wade, the 1973 Supreme Court decision that legalized abortion. At one point, a protester could be heard shouting "more women are going to be subject to back-alley abortions." And outside the hearing room a group of women dressed in bonnets and red robes from The Handmaid's Tale stood silently. U.S. Capitol Police say they arrested a total of 70 demonstrators Tuesday.

Democrats and Republicans are concerned about President Trump's Labor Day tweet, in which he attacked the Justice Department for prosecuting cases against GOP Reps. (and early Trump backers) Duncan Hunter and Chris Collins, "just ahead of the Mid-Terms." Trump added, "Two easy wins now in doubt because there is not enough time. Good job Jeff [Sessions]"

Two long running, Obama era, investigations of two very popular Republican Congressmen were brought to a well publicized charge, just ahead of the Mid-Terms, by the Jeff Sessions Justice Department. Two easy wins now in doubt because there is not enough time. Good job Jeff......

Sen. Dick Durbin, D-Ill., said Kavanaugh was the nominee of "a president who has shown us consistently that he is contemptuous of the rule of law," saying he fired the FBI director and "harasses and threatens his own attorney general on almost a daily basis." Addressing Kavanaugh, Durbin continued, "and it's that president who's decided you are his man," asking, "Are people nervous about this? Are they concerned about it? Of course they are."

Sen. Ben Sasse, R-Neb., said "the comments from the White House yesterday about trying to politicize the Department of Justice — they were wrong." Sasse added that "they should be condemned, and my guess is Brett Kavanaugh would condemn them."

And Arizona Sen. Jeff Flake, another GOP senator who has at times criticized the president, said Trump's comment was "why a lot of people are concerned about this administration and why they want to ensure that our institutions hold."

It's never too soon to start thinking about the next presidential election, right? And while the Senate is full of people who believe they could, or should be president, there are at least a few Democrats on the Judiciary Committee who are believed to harbor real aspirations for the Oval Office.

Sen. Cory Booker, D-N.J., raised some eyebrows when he emailed an appeal during the hearing "to join me in this fight and oppose Judge Kavanaugh's nomination to the Supreme Court." While it was not a direct fundraising pitch — as the only request was to sign a petition — the timing was suspicious to at least one of Booker's GOP colleagues, Sasse, who called Booker out on Twitter, saying "this stuff will make us sicker, not healthier."

This stuff will make us sicker, not healthier.

Sending out fundraising emails DURING A HEARING about opposition to a Supreme Court nominee is not the job of a Senator. It is cynical play-acting for a political base. https://t.co/JCmIb7OwCW

5. Kavanaugh again plays up his family and regular-guy bona fides

No elitist he, this D.C. federal appeals court judge with two degrees from Yale who was counselor to a president. Kavanaugh, when it was finally time to make his opening statement Tuesday evening before the hearing wrapped for the day, stressed the strong women in his family, name-checking his mother, wife and two daughters. He also stressed his Jesuit school background and his love of coaching ("I love coaching," he said). The remarks were similar to some Kavanaugh made when he was named by Trump in July. Kavanaugh also mentioned sitting in the stands with his father, watching the Baltimore Orioles and Washington's NFL team, speaking of "a lifetime of friendship, forged in stadium seats over hot dogs and beer."

He insisted that he will be "a pro-law judge" and a "team player on the Team of Nine." Committee members will attempt on Wednesday to determine what positions he will play on that team. 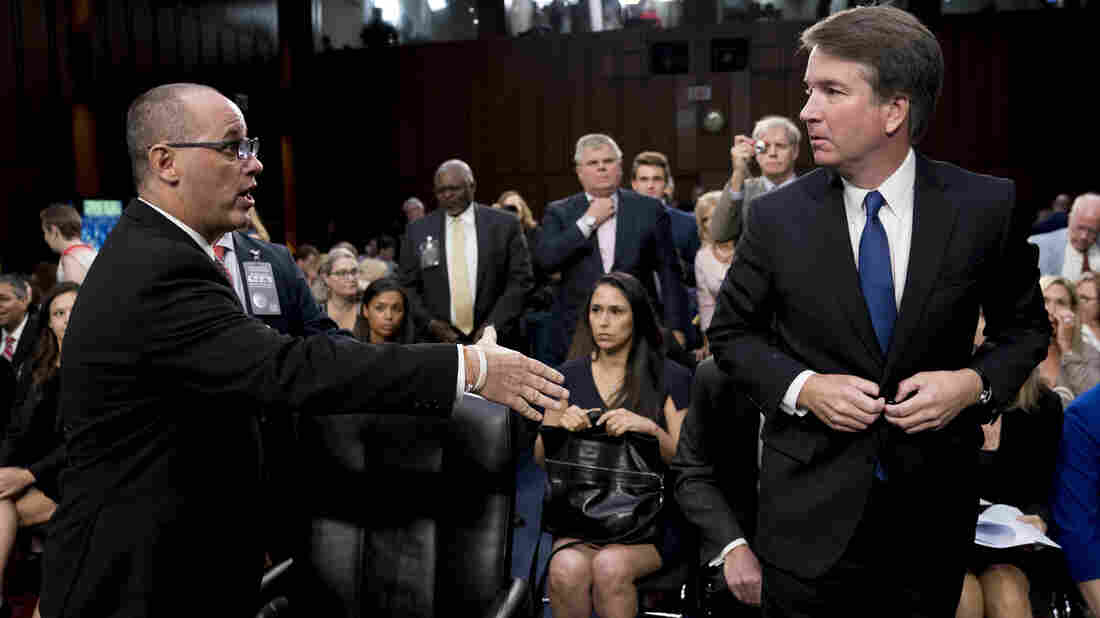 Fred Guttenberg (left), whose daughter, Jaime, was killed in the Marjory Stoneman Douglas High School shooting in Parkland, Fla., attempts to shake hands with Kavanaugh (right) as the nominee leaves for a lunch break while appearing before the Senate Judiciary Committee Tuesday. Andrew Harnik/AP hide caption 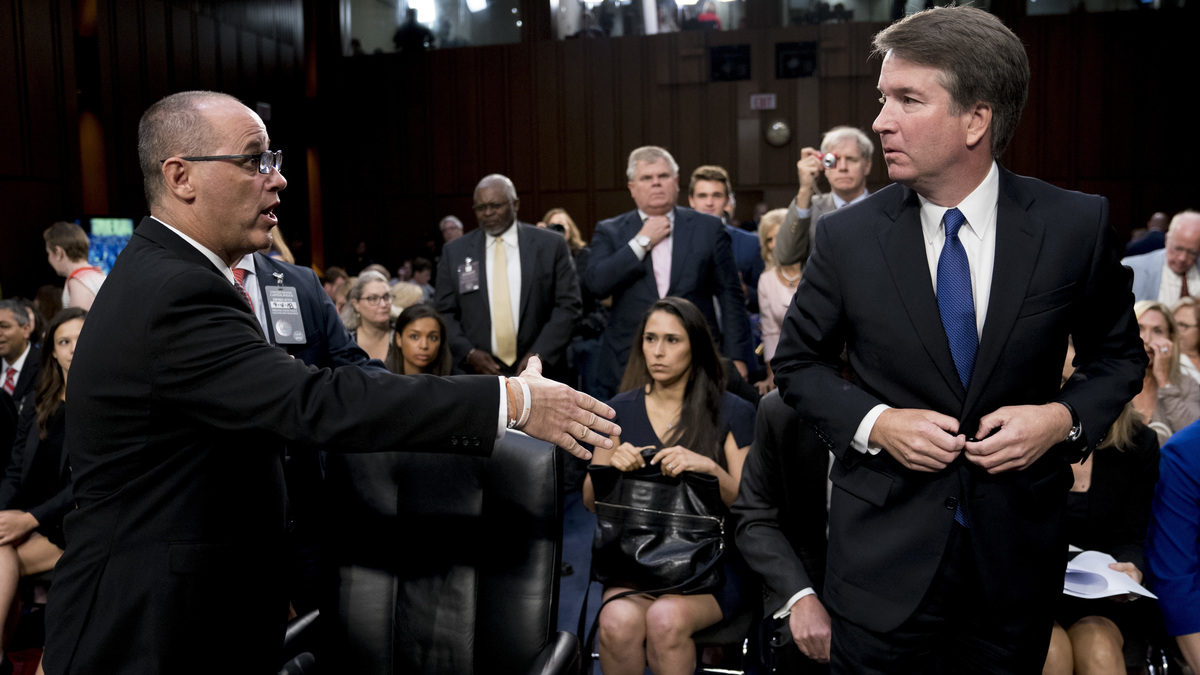 Fred Guttenberg (left), whose daughter, Jaime, was killed in the Marjory Stoneman Douglas High School shooting in Parkland, Fla., attempts to shake hands with Kavanaugh (right) as the nominee leaves for a lunch break while appearing before the Senate Judiciary Committee Tuesday.

Perhaps the day's most viral moment came when the father of a teenage girl who was killed during the mass shooting in Parkland, Fla., approached Kavanaugh during a break in the hearing and offered to shake the judge's hand.

"I invited Fred Guttenberg to sit in the audience at today's hearing because the Supreme Court affects the lives of real people," Sen. Dianne Feinstein, the committee's top Democrat, tweeted after the hearing. "He knows firsthand how Brett Kavanaugh's extreme views on guns could lead to more massacres. Thank you Fred, for honoring your daughter."

A photo of the moment taken by an Associated Press photographer that quickly made the rounds online appeared to show Kavanaugh refusing Guttenberg's handshake.

"He pulled his hand back, turned his back to me and walked away," Guttenberg tweeted about the moment. "I guess he did not want to deal with the reality of gun violence."

But a video posted on Twitter by NBC News from a different perspective shows someone who appears to be a Hill staffer seemingly interceding in the interaction.

Fred Guttenberg, father of Parkland victim, Jaime, tries to shakes hands with Brett Kavanaugh: "My daughter was murdered at Parkland."

White House says an "unidentified individual approached" Kavanaugh, but "before the judge was able to shake his hand, security had intervened." pic.twitter.com/IerpDMOW0h

"As Judge Kavanaugh left for his lunch break, an unidentified individual approached him," White House spokesman Raj Shah tweeted Tuesday afternoon. "Before the Judge was able to shake his hand, security had intervened." In a second tweet, Shah included a video clip of the moment.

By Tuesday afternoon, a link to online coverage of the attempted handshake had been posted on the Twitter account of Demand Justice, a Democratic activist group fighting Kavanaugh's nomination to the court, and to the group's other social media accounts on Facebook and Instagram. "You need to see this," the Demand Justice tweet said.