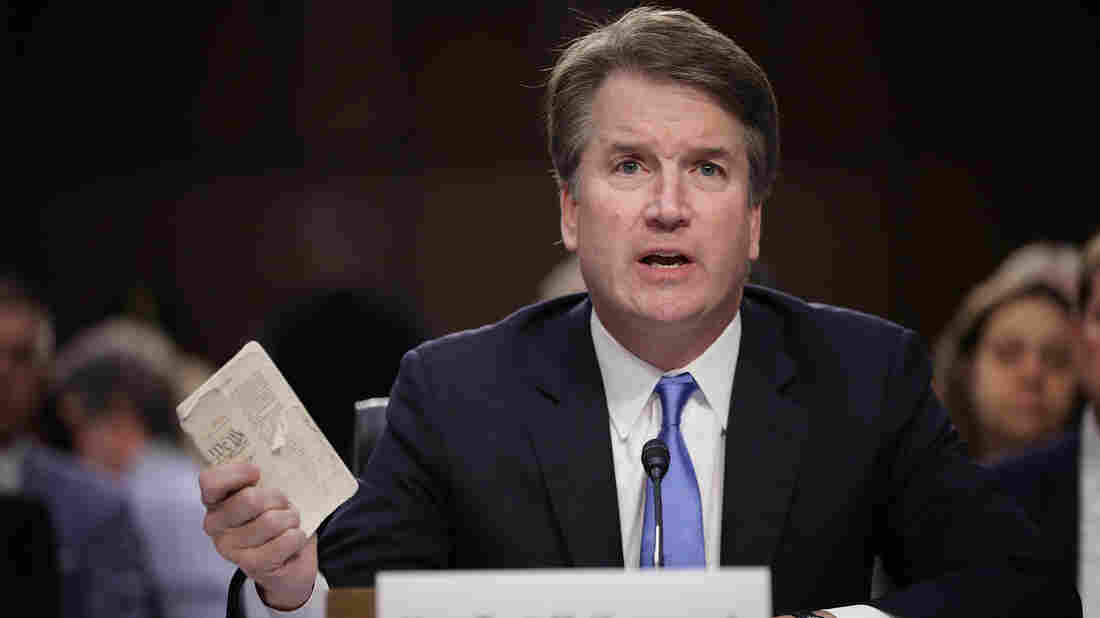 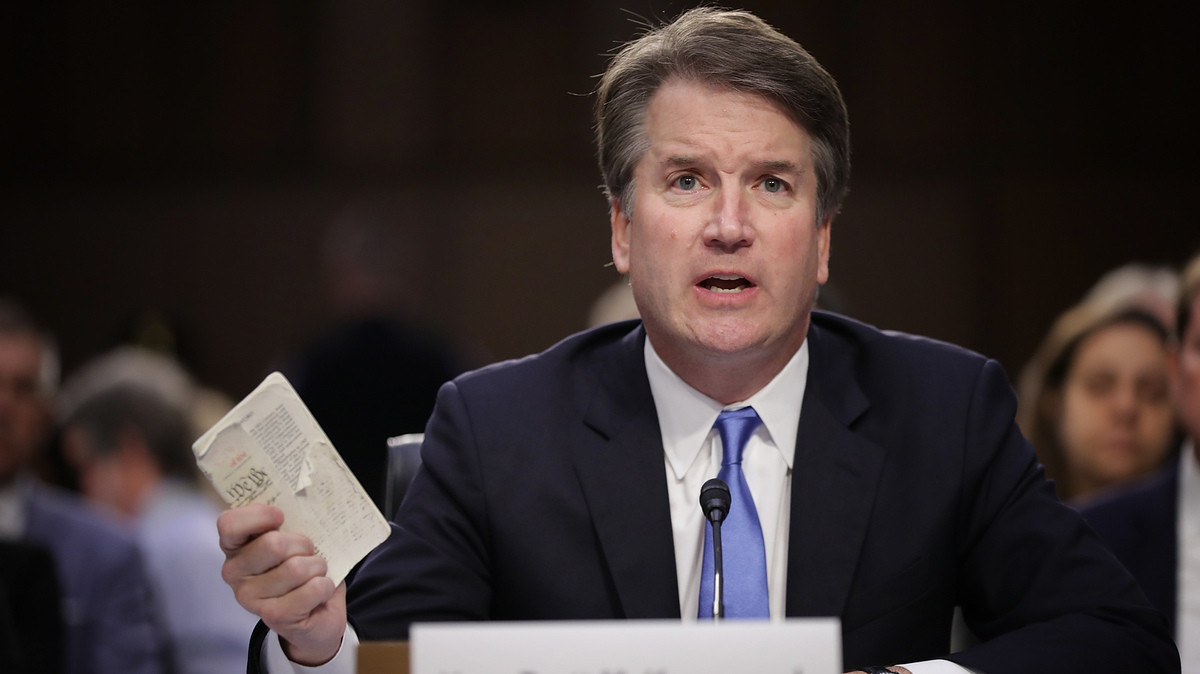 Supreme Court nominee Judge Brett Kavanaugh holds up a small copy of the U.S. Constitution while answering questions before the Senate Judiciary Committee during his confirmation hearing Wednesday on Capitol Hill.

Supreme Court nominee Brett Kavanaugh is presenting himself as an open-minded judge who is guided by the law but not indifferent to the effects of his decisions, during a marathon day of confirmation hearings.

The committee's ranking member, Dianne Feinstein, D-Calif., pressed Kavanaugh on that, as she probed the judge's views on hot-button issues such as abortion and gun control.

"It's an important precedent of the Supreme Court," Kavanaugh said. But he stopped short of saying whether he believes Roe or Casey was correctly decided.

Kavanaugh was later asked about his dissenting opinion last year in a case involving a teenage immigrant who sought an abortion while in federal custody for crossing the border illegally.

Kavanaugh said he would have allowed the Trump administration to require the young woman be placed with an "immigration sponsor," though he added the administration could not use that as a ruse to block the abortion.

"Consider the circumstances," he said. "She's a 17-year-old, by herself in a foreign country in a facility where she's detained and she has no one to talk to and she's pregnant. Now that is a difficult situation."

Kavanaugh also defended his dissenting opinion in a case involving a ban on semi-automatic rifles. He argued the ban should have been found unconstitutional, citing a decision by the late Justice Antonin Scalia that only "unusual" weapons can be outlawed.

Kavanaugh stressed that as a native of the Washington, D.C., area, he is well-aware of the danger posed by gun violence.

"Of course, the violence in schools is something that we all detest and want to do something about," Kavanaugh said.

Sen. Dick Durbin, D-Ill., challenged Kavanaugh over a dissenting opinion in which he argued that slaughterhouse workers living in the country illegally were not entitled to form a union, despite the express language of the National Labor Relations Act.

"You claim over and over again to be a textualist — to be carefully weighing every word of a statute," Durbin said. "So why did you go out of your way to interpret the word 'employee' in a way that benefited this horrible business and disadvantaged these exploited workers?"

Kavanaugh allowed that from time to time the Supreme Court reverses its own precedents. He pointed to once such reversal — Brown v. Board of Education, which ended the "separate but equal" doctrine — as "the single greatest moment in Supreme Court history."

For the second day in a row, the hearing was repeatedly interrupted by protesters. But questioning quickly resumed as demonstrators were hustled out of the hearing room by U.S. Capitol Police.

Barring a surprise, Senate Republicans have the votes to confirm Kavanaugh in time for him to take his place on the high court when it begins its fall term next month. Both supporters and opponents believe he would tilt the Supreme Court to the right, cementing a 5-4 conservative majority for years to come.

Sen. Chuck Grassley, R-Iowa, the committee's chairman, highlighted Kavanaugh's experience as an appeals court judge, then asked whether he would have any trouble ruling against the president who appointed him.

"No one is above the law in our constitutional system," Kavanaugh replied. "Under our system of government, the executive branch is subject to the law."

Kavanaugh pointed approvingly to several examples of Supreme Court justices who ruled against the presidents who appointed them. He also highlighted his own decision as an appeals court judge, rejecting a military tribunal for terrorism suspect Salim Hamdan, even though it was a "signature prosecution" of the George W. Bush administration in which Kavanaugh served before joining the federal bench.

"You'll never have a nominee who's ruled for a more unpopular defendant," Kavanaugh said. "You don't make decisions based on who people are or their policy preferences. You base decisions on the law."

Kavanaugh is also facing questions about his thoughts on presidential power and immunity. Although he worked on Kenneth Starr's investigation into President Bill Clinton, he later wrote that a sitting president should not have to face the distraction of civil or criminal investigations.

"What changed was Sept. 11," Kavanaugh said, explaining the evolution of his views. He stressed that his writing on presidential immunity was meant as a recommendation for lawmakers, not a preview of how he might rule as a judge.

"They were ideas for Congress to consider," Kavanaugh said. "They were not my constitutional views." 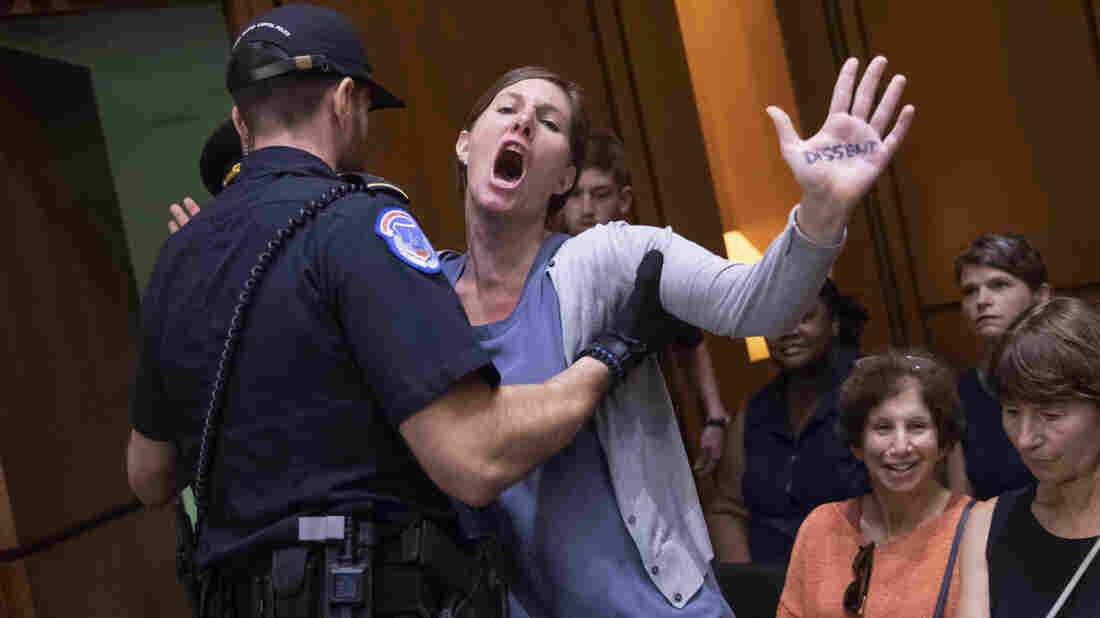 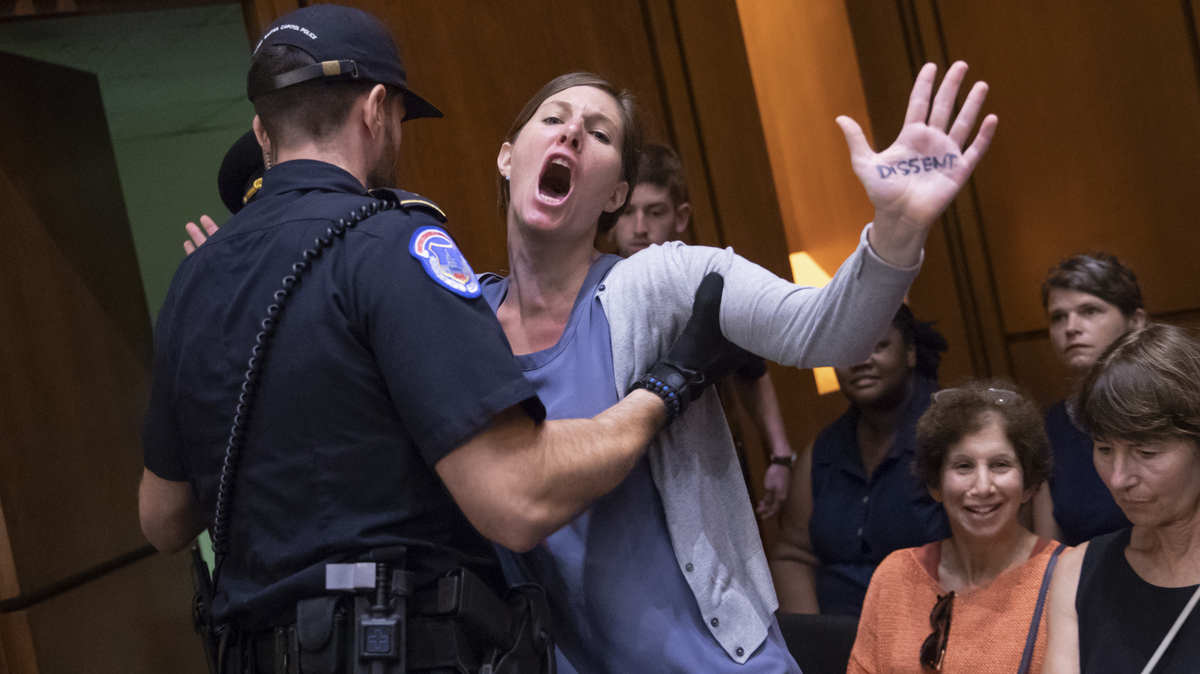 A protester disrupts the proceedings as Supreme Court nominee Judge Brett Kavanaugh appears before the Senate Judiciary Committee on Wednesday on Capitol Hill in Washington, D.C.

Like previous nominees, Kavanaugh avoided answering questions that might come before the Supreme Court, including whether he would uphold a statute requiring insurance companies to provide coverage for pre-existing medical conditions and whether a president can offer a pardon in exchange for someone's silence.

He also ducked questions about the president's tweets this week criticizing the prosecution of two GOP lawmakers, as well as his comments on the deadly white supremacists rally in Charlottesville, Va.

"I don't think we want judges commenting on the latest political controversy," Kavanaugh said. "That would ultimately lead the people to doubt whether we're independent, whether we're politicians in robes."

Sen. Mazie Hirono, D-Hawaii, grilled Kavanaugh over a legal brief he'd co-authored raising questions about whether native Hawaiians are entitled to protections similar to those granted Native Americans on the mainland. She suggested his reasoning might also affect the treatment of native tribes in Alaska. Kavanaugh noted that his argument was embraced by the Supreme Court on a 7-2 vote.

On the question of regulation, Kavanaugh expressed reservations about how much latitude government agencies should be given, saying administrations sometimes try to do through rule-making what they're unable to do through legislation.

Kavanaugh also described his experience tutoring boys from low-income families and working at a soup kitchen as helping to ground his work on the bench.

"You're a better judge if you're aware," he said. "Judging is important, but I wanted to be more directly involved in the community."

"We've all been in courtrooms where the judge is acting a little too full of being a judge," Kavanaugh added. "I try not to do that."