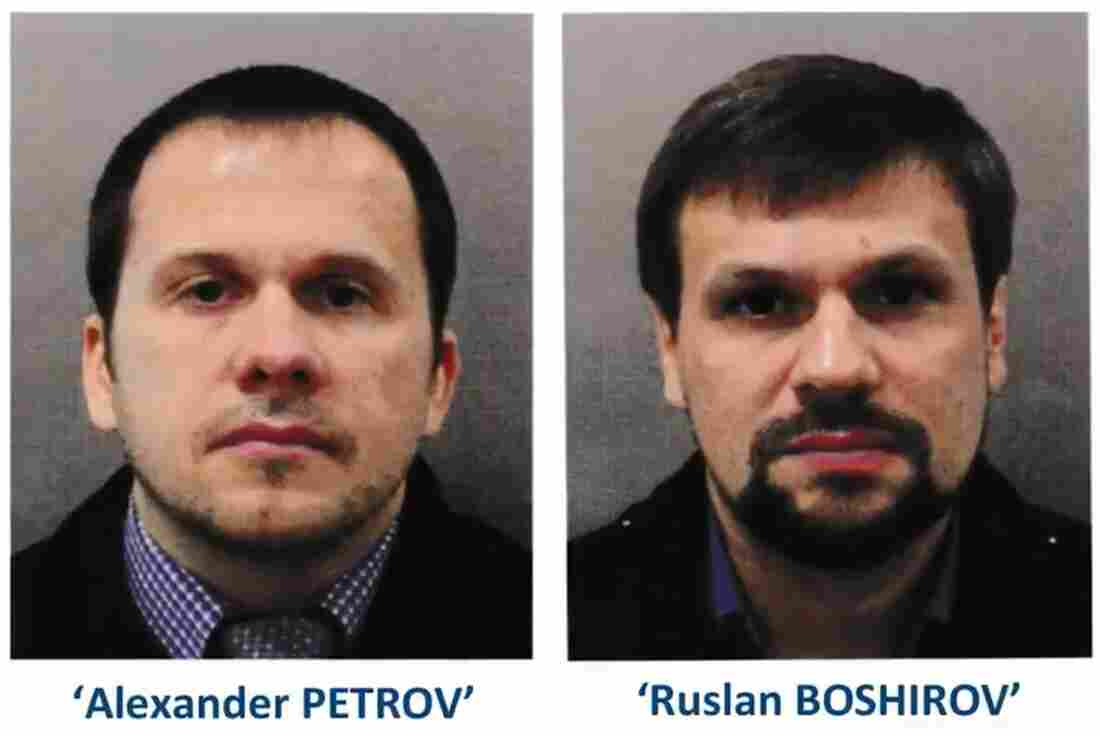 Two Russian men are accused of attempting to kill former KGB agent Sergei Skripal on March 4 — the same day they flew to Moscow. "We have no evidence that they re-entered the U.K. after that date," says Assistant Commissioner Neil Basu of the U.K.'s counterterrorism force. U.K. Metropolitan Police hide caption 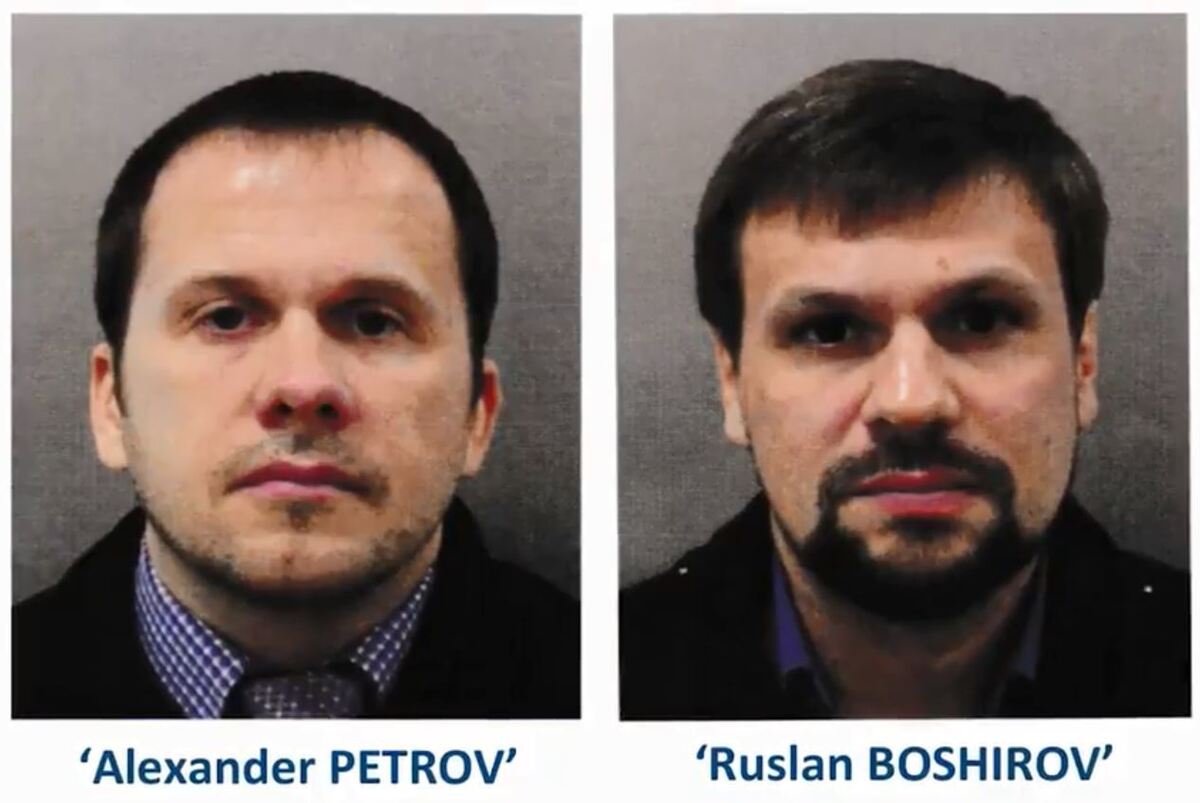 Two Russian men are accused of attempting to kill former KGB agent Sergei Skripal on March 4 — the same day they flew to Moscow. "We have no evidence that they re-entered the U.K. after that date," says Assistant Commissioner Neil Basu of the U.K.'s counterterrorism force.

British authorities have charged two Russian men with using a Novichok nerve agent to poison former KGB spy Sergei Skripal and his daughter Yulia. Scotland Yard now wants help to find the two men, who flew from the U.K. to Moscow on the same day the Skripals fell ill.

Calling it "the most significant moment so far" in the investigation into the Skripals' near-fatal encounter with the exotic poison, counterterrorism police said the attack was carried out by Alexander Petrov and Ruslan Boshirov — names that investigators say are likely aliases used for the operation.

British Prime Minister Theresa May said Britain's security and intelligence agencies have concluded "that the two individuals named by the police and CPS [Crown Prosecution Service] are officers from the Russian military intelligence service, also known as the GRU."

Citing the GRU's reputation for strict discipline and hierarchy, May added, "this was not a rogue operation."

"It was almost certainly also approved outside the GRU, at a senior level of the Russian state," May said, suggesting that President Vladimir Putin's government was deeply involved in the attack.

May has previously accused Russia of being behind the attempt to kill the former spy and his daughter. On Tuesday, she said that after the U.K. asked Moscow for information related to the case, Russia "replied with obfuscation and lies."

In Moscow's reply Wednesday, presidential aide Yuri Ushakov told the media that Britain has fabricated the names of the suspects, saying that the names "mean nothing" and that it "is difficult to comprehend" the U.K.'s motives, according to state-run Tass media.

The new details from police outline a brief international trip by the two suspects, who landed at the Gatwick airport from Moscow on March 2.

Over the course of two days, the men traveled from London to Salisbury, England, twice — once to perform reconnaissance around the Skripals' home, and again to put lethal poison on their front door, police say. The men were spotted on numerous security and surveillance cameras as they moved between the two cities. Hours after their final visit to Salisbury, they took a late-night flight back to Moscow on March 4 — the same day the Skripals were sickened.

"We have no evidence that they re-entered the U.K. after that date," said Assistant Commissioner Neil Basu, of the counterterrorism force.

We have tracked the two suspects as they enter the UK from Russia, travel to #Salisbury from London on two occasions and return to Russia.

Did you see them between Friday 2 March and Sunday 4 March?

There are no plans to try to extradite the two men from Russia, said Sue Hemming of the Crown Prosecution Service, because "the Russian constitution does not permit extradition of its own nationals."

Hemming added, "We have, however, obtained a European Arrest Warrant which means that if either man travels to a country where an EAW is valid, they will be arrested and face extradition on these charges for which there is no statute of limitations."

Both of the Skripals survived the attempt on their lives, but in what police call a tragic consequence of the attack, Dawn Sturgess, a 44-year-old mother of three, died on July 8 after being exposed to the same nerve agent.

In Salisbury — the town where the Skripals were found incapacitated on a bench on March 4 — police officer Nick Bailey was left seriously ill after being exposed to the deadly material. The current charges relate to his and the Skripals' case.

Sturgess and her boyfriend, Charlie Rowley, fell ill in Amesbury, England. Providing new information about the Sturgess case, police say that while they're not certain how the suspects disposed of the poisonous material before leaving the U.K., "a significant amount of Novichok" was found in a bottle in Rowley's home. It had been held in a pink box, falsely labeled as Nina Ricci Premier Jour perfume.

"Charlie told police he found a box he thought contained perfume in a charity bin on Wednesday, 27 June," Assistant Commissioner Basu said. "Inside the box was a bottle and applicator. He tried to put the two parts together at his home address on Saturday, 30 June, and in doing so got some of the contents on himself. He said Dawn had applied some of the substance to her wrists before feeling unwell." 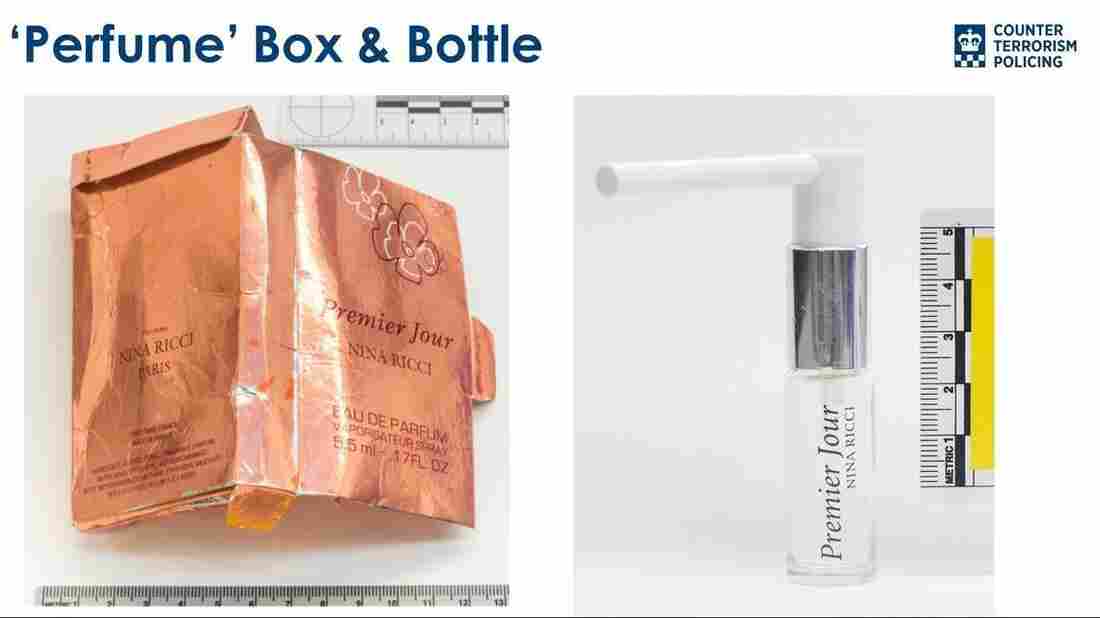 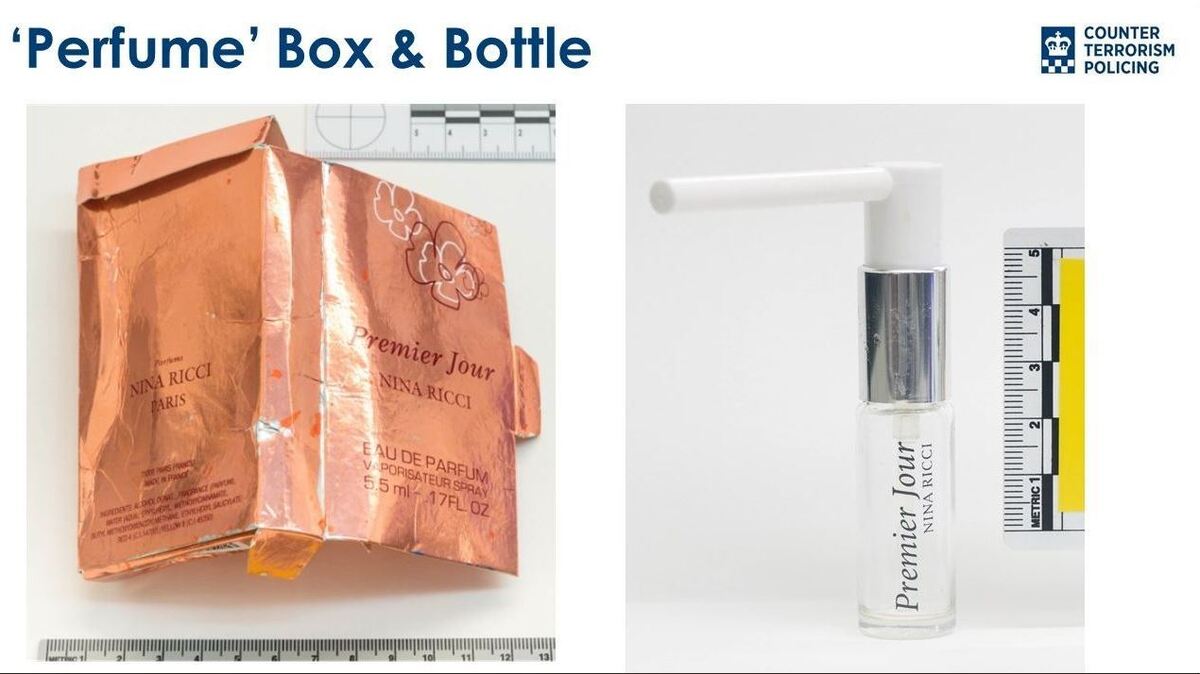 A counterfeit perfume box and bottle were "especially adapted" to smuggle a deadly nerve agent into the U.K., said Assistant Commissioner Neil Basu.

The perfume packaging was bogus — and the bottle and nozzle had been "especially adapted," Basu said. The result, he said, was "a perfect cover for smuggling the weapon into the country, and a perfect delivery method for the attack against the Skripals' front door."

British police are publicly naming the two suspects one day after the Organisation for the Prohibition of Chemical Weapons said it had corroborated the U.K. investigation's findings that "the same toxic chemical" was responsible for the attack in Salisbury and for Sturgess' death in Amesbury.

In May, two months after the attack, Yulia Skripal said that she and her father are "so lucky to have both survived this attempted assassination," despite ongoing health concerns and medical complications from the attack.

Prosecutors are charging the two alleged Russian agents with conspiracy to murder Sergei Skripal, along with the attempted murder of Sergei and Yulia Skripal and Nick Bailey, along with the use and possession of Novichok contrary to the Chemical Weapons Act, among other crimes.

Sergei Skripal had been a double-agent for Britain's MI6 intelligence service. He was eventually arrested in Russia, but he was freed in a prisoner swap in 2010, and he has become a U.K. citizen.

The attempt on Skripal's life is seen as part of a string of suspicious attacks or deaths of high-profile Russians living in the U.K. and abroad. The most famous of those cases centers on the poisoning death of Kremlin critic and former spy Alexander Litvinenko. But the list also includes Nikolai Glushkov, a 68-year-old Russian businessman who was murdered in March, and oligarch Boris Berezovsky, who died by hanging in London 2013.

Moscow has denied accusations that the Russian government is linked to those incidents.

The U.S. and other U.K. allies have imposed sanctions on Russia in retaliation for the poisoning.