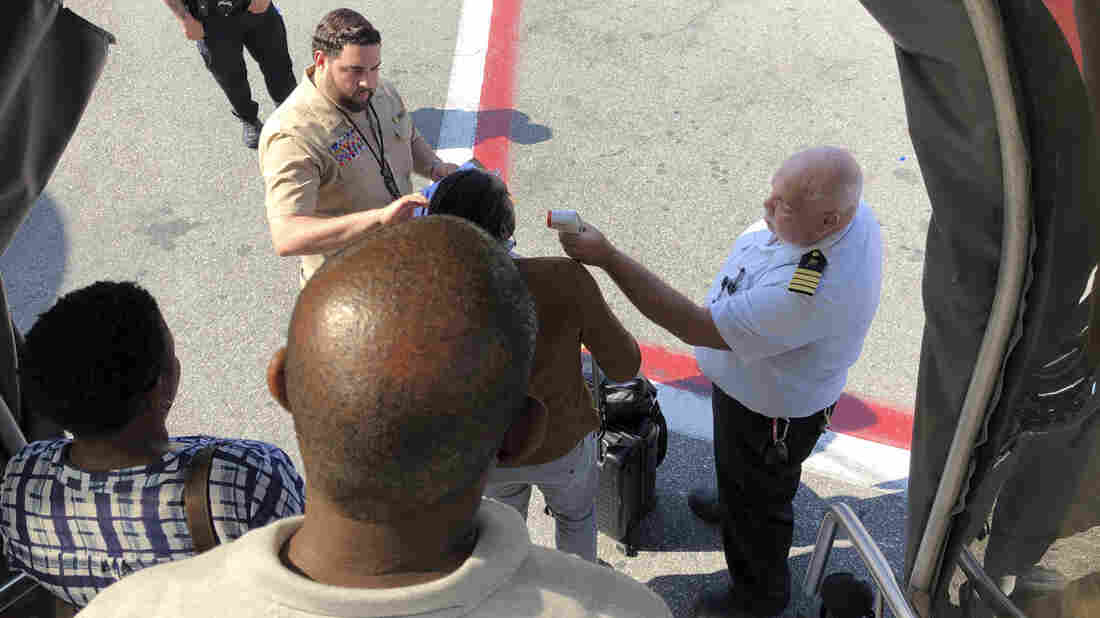 A passenger gets her temperature taken as she gets off Emirates Flight 203 at New York's John F. Kennedy International Airport on Wednesday. Larry Coben via AP hide caption 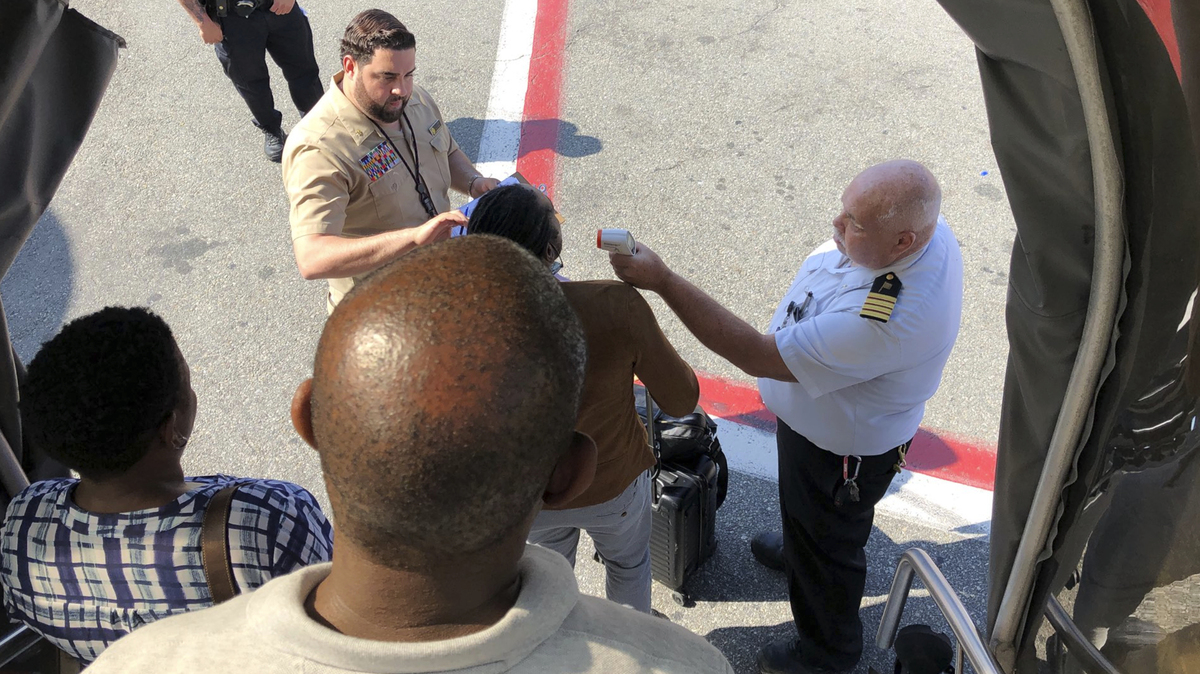 A passenger gets her temperature taken as she gets off Emirates Flight 203 at New York's John F. Kennedy International Airport on Wednesday.

Seven crew members and three passengers were taken to the hospital, Emirates Airline said. It added that Wednesday's return flight from New York to Dubai would leave three hours late.

The Centers for Disease Control and Prevention said around 100 people on the overnight Flight 203 had complained of illness. For some, the symptoms were limited to a cough; others had a fever.

BREAKING: An Emirates A380 in quarantine at JFK Airport right now awaiting CDC officials after about 100 passengers became ill with fevers over 100 degrees and coughing. Flight 203 had just arrived from Dubai. pic.twitter.com/lyUgNbMaEW

Ten people were taken off the plane for treatment at Jamaica Hospital Medical Center, said Eric Phillips, press secretary for New York City Mayor Bill de Blasio. He said nine others were found to be sick but refused medical attention.

The aircraft was carrying around 521 passengers. Health officials allowed people to disembark only after checking each one for symptoms, Phillips stated, adding, "The plane's been quarantined and the CDC is on the scene."

As for what the sickness might be, Phillips referred to a "flu outbreak" in Mecca, Saudi Arabia, and said that might be a possibility, stating, "It appears some of the ill passengers came from Mecca before getting on in Dubai."

Passenger Erin Sykes called it the "worst flight ever," saying on Twitter that the plane "was basically a flying infirmary. Many of these people should never have been allowed to board."

@emirates worst flight ever Dubai to NYC; plane was basically a flying infermary. Many of these people should never have been allowed to board. Now sitting on the ground after 14 hour flight unable to leave. @EmiratesSupport #emirates #worstairline

In another tweet, Sykes said that after noticing the state of some of her fellow passengers even before the plane took off, "I asked for a mask, but they don't have any."

Sykes and many other passengers were held on the plane for an additional two hours after the 13-hour flight landed in the U.S. shortly after 9 a.m. ET.

By around noon, 432 passengers had been cleared and allowed to go to the customs area, according to Phillips. A few others who showed symptoms were held for treatment and possible transport to the hospital.

NPR's Rob Stein reports that the Centers for Disease Control and Prevention is working with local authorities.

The Airbus A380 jet was isolated on the tarmac at JFK, as officials took stock of the situation. Images from the scene showed a row of ambulances alongside the aircraft.

Passenger Larry Coben said via Twitter that CDC staff came onto the plane and that everyone aboard was asked to fill out a form providing their contact information for the next three weeks.