Accessibility links
Trump Weighs In On SNAP Work Requirements Ahead Of Farm Bill Meeting The SNAP program, commonly referred to as food stamps, is the biggest sticking point between versions of the Farm Bill. The House, and President Trump, want it to have stricter work requirements. 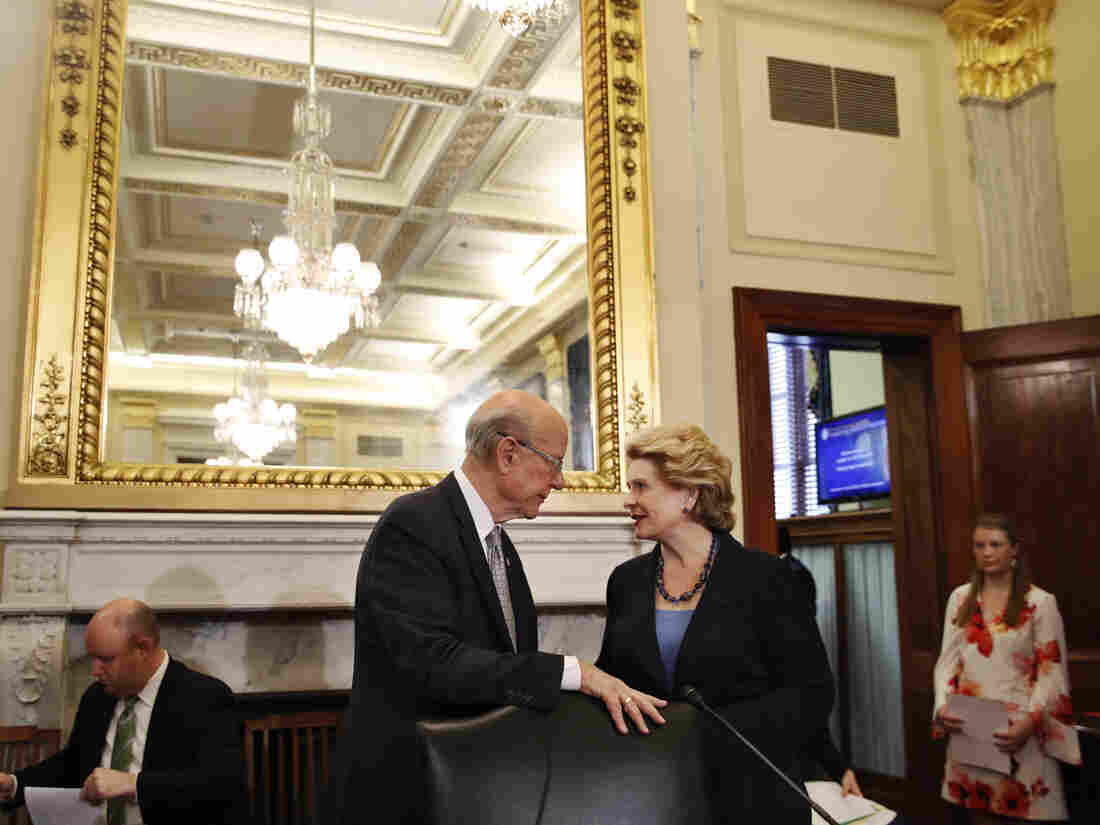 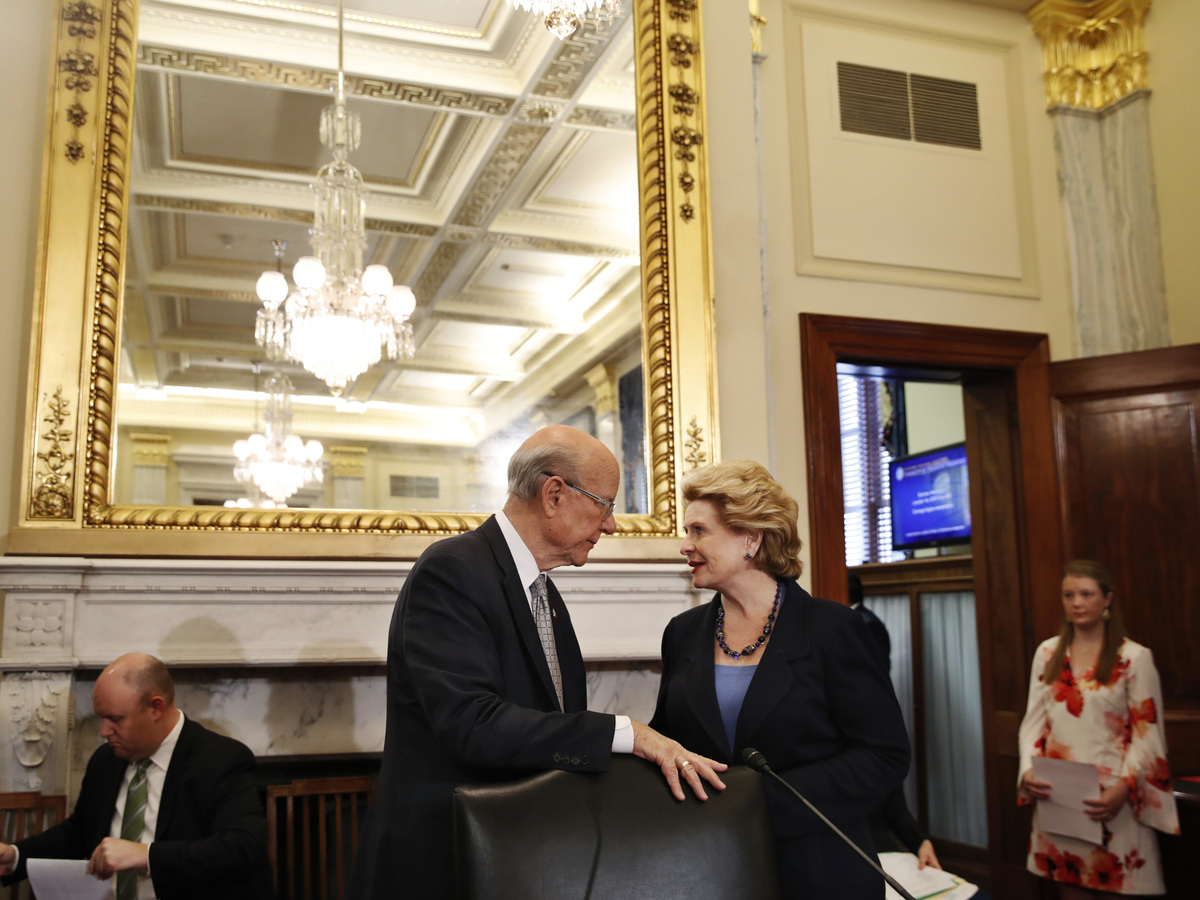 Sen. Pat Roberts, R-Kan., chairman of the Senate Agriculture Committee, left, speaks with Ranking Member Sen. Debbie Stabenow, D-Mich., during a meeting of the committee in June, to consider a bipartisan farm bill.

With a deadline looming and pressure on lawmakers escalating, a large bipartisan, bicameral conference committee gathered on Capitol Hill Wednesday for the first formal negotiations of the Farm Bill.

Many on the committee — which includes a whopping 56 conferees — reiterated that it is imperative that work on the new Farm Bill be completed this month — before the current one expires on Sept. 30.

But the biggest sticking point between the competing House and Senate bills has to do with changes to the Supplemental Nutrition Assistance Program, often called food stamps.

Even before the conference committee could get underway, President Trump weighed in, via tweet, suggesting he wants to sign a bill that only has tougher work requirements attached.

The House-backed proposal, which passed without a single vote from Democrats, would eventually increase the minimum hours of work or job training to 25 hours per week. It also expands requirements for able-bodied adults 18 to 59, who do not have young children.

The Senate version, which passed with bipartisan support, keeps the existing work requirements intact and calls for expanded work training programs. The current law requires most able-bodied adults ages 18 to 49, who don't have dependents or a disability, to work or be enrolled in equivalent job training programs for at least 20 hours a week.

At the outset of the meeting, Sen. Pat Roberts, R-Kan., agreed changes to the SNAP program were needed.

"I share the goal of promoting work and self-sufficiency among SNAP participants and we can find ways to work toward that goal by improving the program," Roberts said.

He added though, that getting a Farm Bill passed is "paramount" to any other issue or concern.

"We are very close to the finish line, but we still have a lot of work to do, quite frankly a lot of compromise that remains to be done," Roberts said.

The sweeping legislation, which has to be renewed every five years, covers a range of crop subsidies for farmers, aids in conservation and rural development.

According to the Department of Agriculture, 42 million low income individuals received SNAP benefits last year. The Nutrition title which includes SNAP accounts for 80 percent of the current Farm Bill cost.

Many members of the committee said it is important to pass legislation to give farmers some certainty in an industry that is known for being unpredictable. Some pointed to a report by the USDA forecast last week that predicted 2018 profits for the farm sector will be down 13 percent from 2017 levels or a loss of $9.8 billion.

"One for farmers and ones for families," Stabenow said. "I know that feeding people in need and helping them find good paying jobs doesn't have to be a partisan issue, and in fact it shouldn't be."

Earlier on Wednesday, USDA released 2017 survey results on household food insecurity in the nation. While results showed a decline in the measure, still some 15 million households reported being food insecure, meaning access to "adequate" food is hampered by lack of money and other resources.

SNAP is not the only difference between House and Senate bills. Industrial hemp, while not as controversial, remains unresolved.

After Centuries, Hemp Makes A Comeback At George Washington's Home

One of the industrial hemp champions, Senate Majority Leader Mitch McConnell has been pushing for legalizing since at least April, and had a provision added to the Senate legislation.

"Now it's no secret I'm particularly excited about the parts of the Senate-passed bill that concern industrial hemp," McConnell, R-Ky., said during the meeting. He also said he could not remember the last time that he, as Majority Leader, appointed himself to a conference committee.

The 2014 Farm Bill allowed for a trial period, giving the OK states to grow hemp for research purposes.

"It's time we build on the work we began with the pilot program in the 2014 Farm Bill and unleash farmers in Kentucky and any other state...that want to take a shot at it. With proper oversight, they can capitalize on this multi-billion dollar market," McConnell said.

It's not clear if there will be future public meetings for Farm Bill conferees, or if most of the negotiations will take place behind closed doors.

"More than any one issue, I want a farm bill," said Rep. Collin Peterson, D-Minn. He added that the goal is to get a conference report that can be passed by the respective chambers then signed into law by the president.

"Nobody in this room is going to get everything they want and that this process is about compromise."