Accessibility links
Kavanaugh Hearings, Day 2: More Protests As Senators Press On Precedent There were frequent interruptions of the hearing by demonstrators as senators got their chance to question Supreme Court nominee Brett Kavanaugh directly. 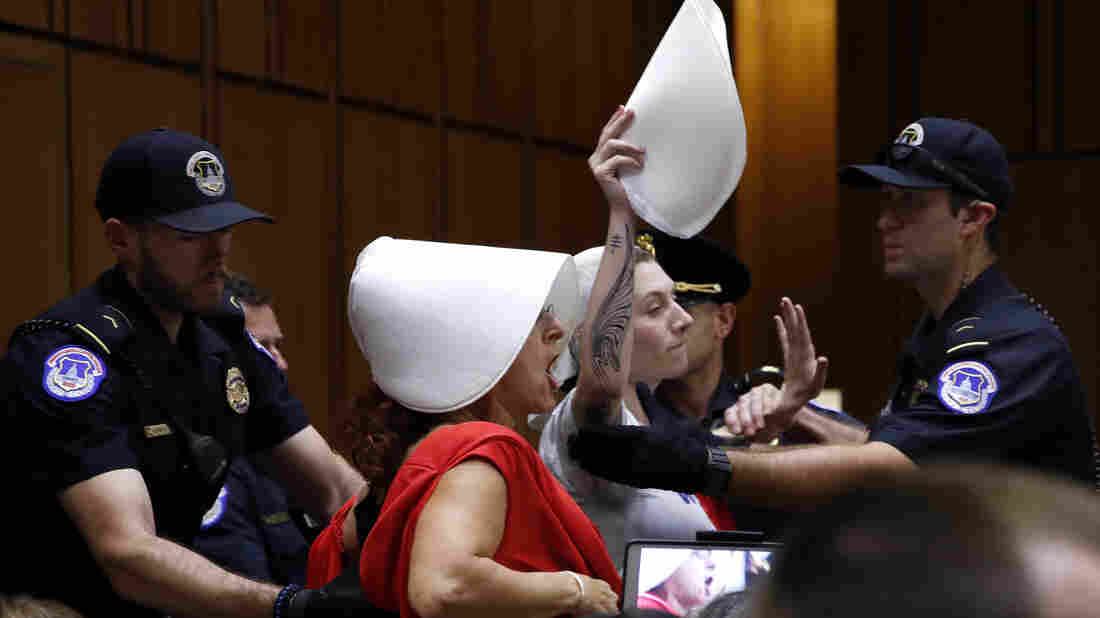 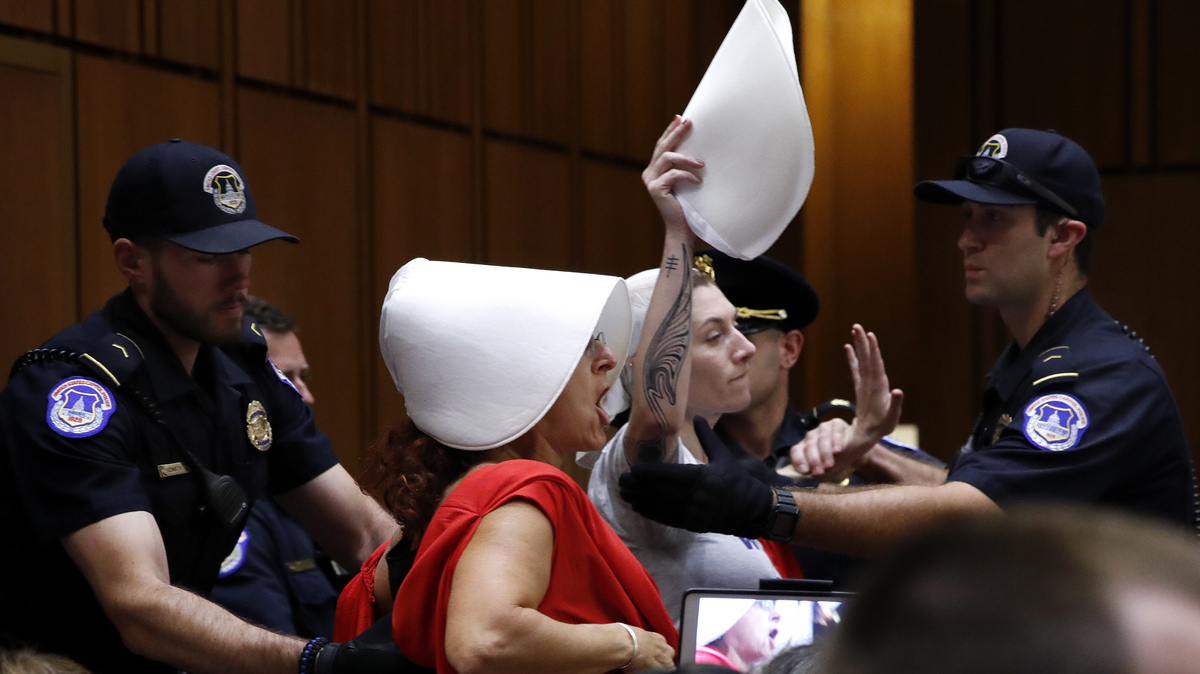 Protesters of Supreme Court nominee Judge Brett Kavanaugh protest while wearing costumes from The Handmaid's Tale during his confirmation hearing with the Senate Judiciary Committee on Capitol Hill Wednesday.

Wednesday was Day 2 of the Supreme Court confirmation hearings for Judge Brett Kavanaugh and it gave members of the Senate Judiciary Committee a chance to question the Trump nominee publicly and one-on-one. There were more protests, and much talk of precedent.

Just like on Tuesday, there were sporadic interruptions of the hearing throughout the day by protesters in the Hart Building hearing room. The protests became so frequent at times that they began to seem a part of the ambiance. U.S. Capitol Police quickly and sometimes roughly moved the protesters out of the room before many of them could be clearly heard.

"What a bunch of dumbbells," Sen. Orrin Hatch, R-Utah, was overheard saying.

At least one of the protesters was dressed as a character from television's The Handmaid's Tale, in a crimson robe and white bonnet, shouting, "Stop Kavanaugh. Our bodies, our choice," as she was dragged out. Another activist shouted "disabled people have human rights." Capitol Police reported 73 arrests Wednesday.

At the start of the hearing Wednesday, Senate Judiciary Committee Chairman Chuck Grassley, R-Iowa, accused Democrats of coordinating with protesters, which Democrats deny. President Trump weighed in on the protests, too. In an interview Wednesday, Trump lashed out at the demonstrators, saying, "I think it's embarrassing for the country to allow protesters. You don't even know what side the protesters are on." Trump said, "In the old days, we used to throw them out. Today, I guess they just keep screaming."

The judge has made more than one mention of his mother, Martha Kavanaugh, who he said introduced him to law. She was a prosecutor and later a state circuit court judge in Montgomery County, Md. On Wednesday, Kavanaugh said his mother showed him "the importance of women's equality." Her example and a newspaper article citing the scarcity of female clerks on the Supreme Court inspired him to hire three women as clerks when he became a federal appeals court judge in 2006. 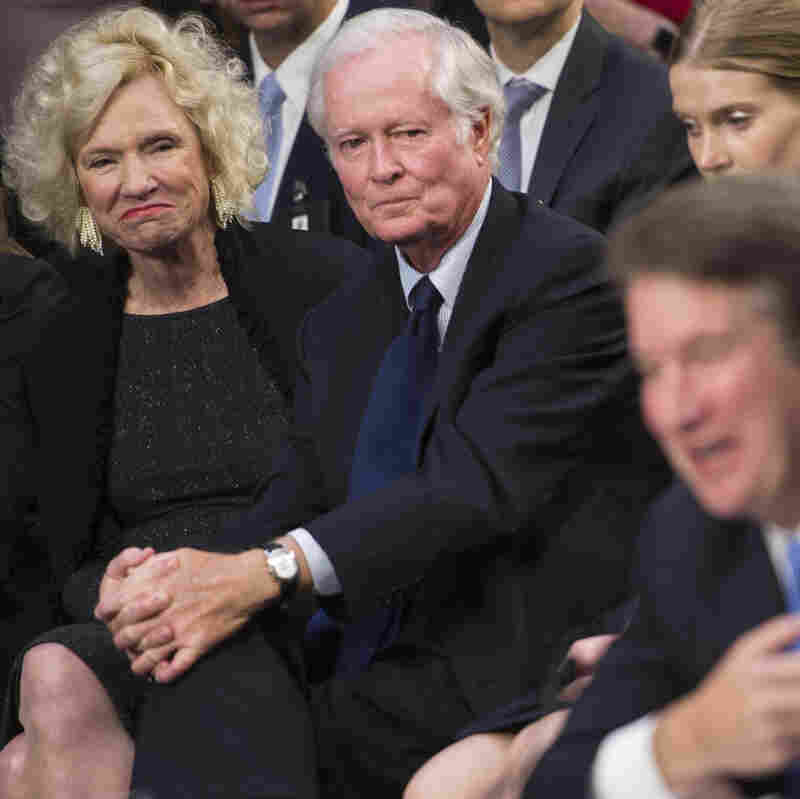 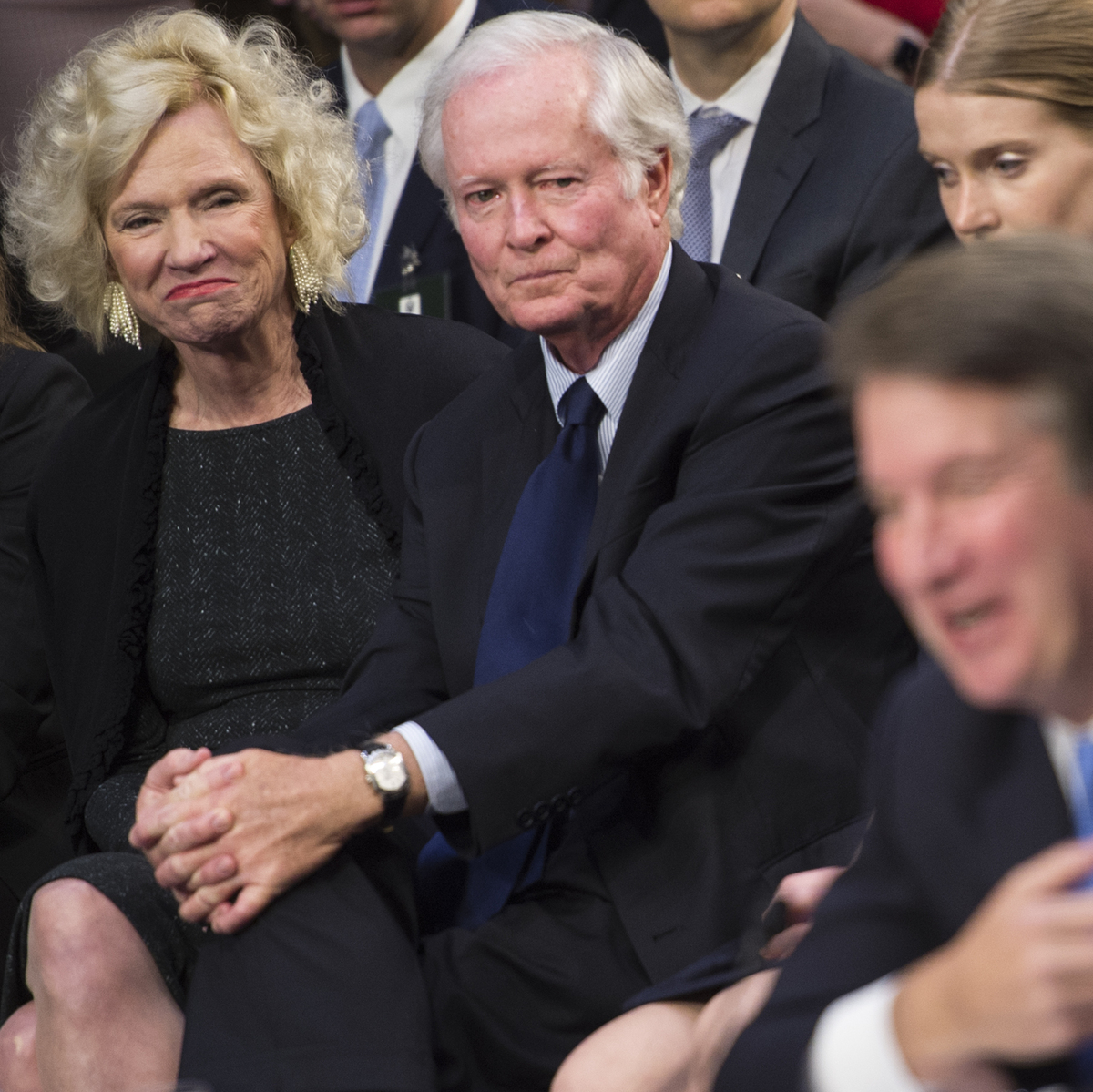 Judge Brett Kavanaugh parents, Martha Kavanaugh and Everett Edward Kavanaugh, look on as he testifies during the second day of his Supreme Court confirmation hearings Wednesday.

"I've been very aggressive in hiring the best" clerks, Kavanaugh said, and understanding that "the best include women." Kavanaugh said he has hired 25 women clerks, of whom 21 have gone on to serve as clerks on the Supreme Court, calling them "an awesome group." If confirmed, he said he would continue the practice.

Kavanaugh was also asked about his association with former Ninth Circuit Judge Alex Kozinski, who resigned late last year after several women, including former law clerks, accused him of inappropriate touching and forcing them to view pornography in his chambers.

Kavanaugh, who clerked for Kozinski in the early 1990s, called the revelation "a gut punch." He said he spoke with Kozinski "not often," after his clerkship, although he did work with him and 11 others on a book on judicial precedent. Kavanaugh said, "No woman should be subjected to sexual harassment in the workplace, ever, including in the judiciary, especially in the judiciary."

3. Precedents, and "precedent on precedent" 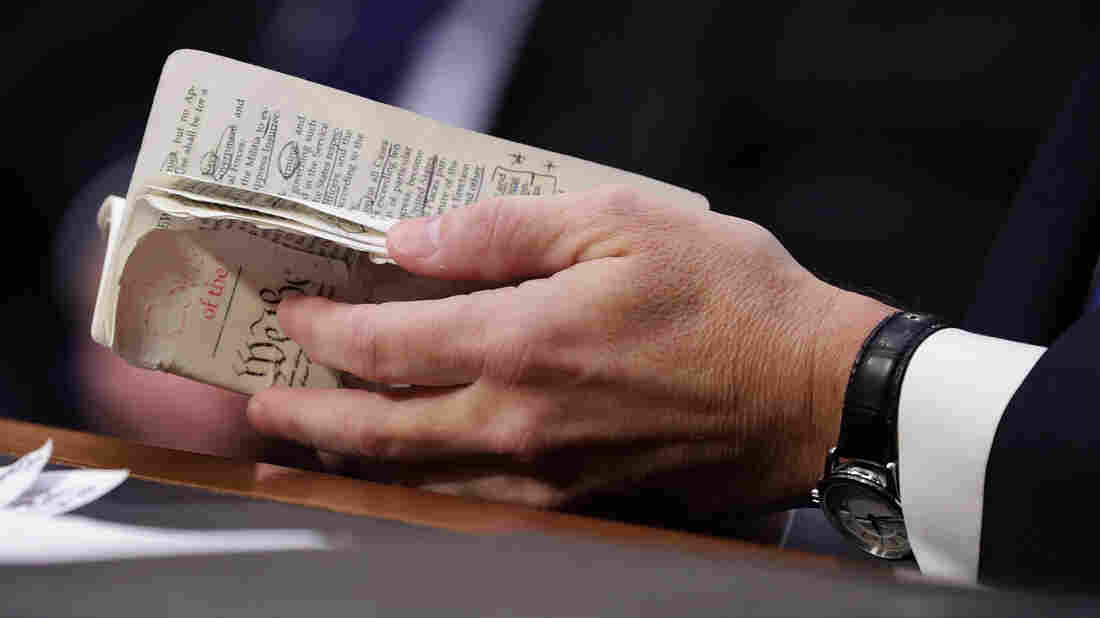 Supreme Court nominee Judge Brett Kavanaugh thumbs through a well-worn, pocket-sized copy of the U.S. Constitution as he testifies before the Senate Judiciary Committee on the second day of his confirmation hearings Wednesday. Chip Somodevilla/Getty Images hide caption 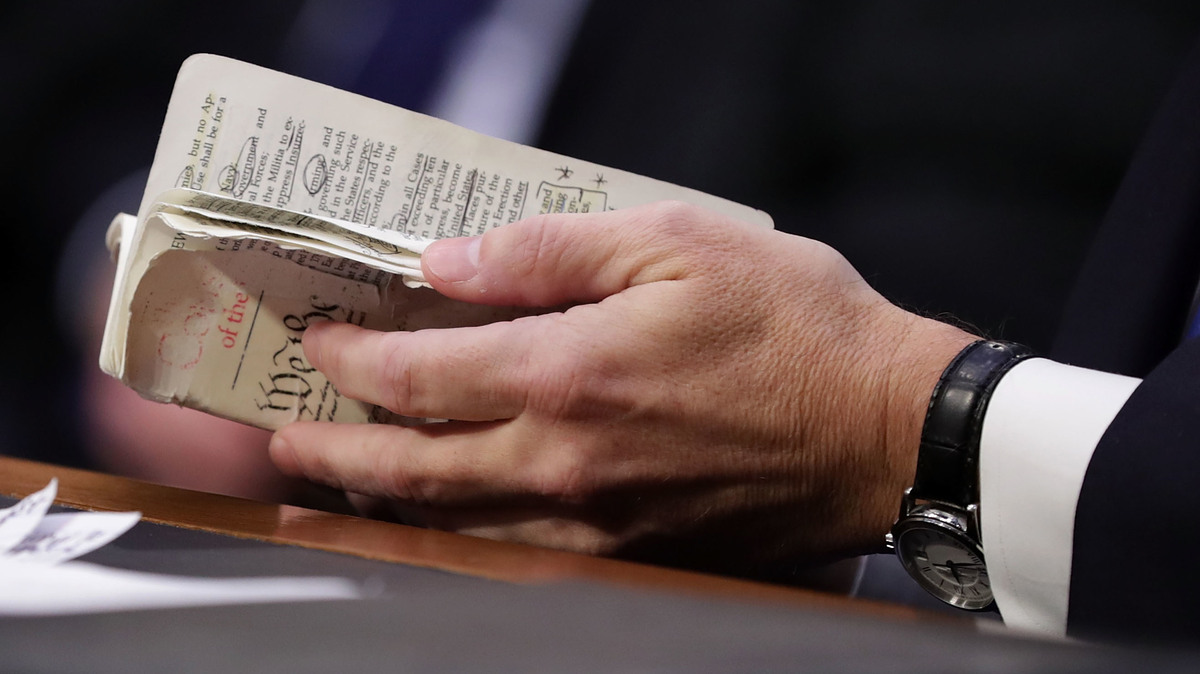 Supreme Court nominee Judge Brett Kavanaugh thumbs through a well-worn, pocket-sized copy of the U.S. Constitution as he testifies before the Senate Judiciary Committee on the second day of his confirmation hearings Wednesday.

Maybe it was the book he co-authored on the topic, but Kavanaugh spent a lot of time Wednesday talking about precedents, and how they guide his judicial thinking. Much of that discussion centered on Roe v. Wade, in which the Supreme Court legalized abortion in 1973. Kavanaugh said Roe "was settled as a precedent of the Supreme Court." Responding to questions from Sen. Dianne Feinstein, D-Calif., Kavanaugh also spoke about a subsequent Supreme Court decision, Planned Parenthood v. Casey, which upheld Roe but also narrowed its scope. Casey, Kavanaugh said, was "precedent on precedent."

What that indicates about how Kavanaugh might rule on, say, a state law restricting abortion access is unclear.

Kavanaugh also cited precedent in answers to questions ranging from his position against a 17-year-old undocumented immigrant who sought an abortion (Kavanaugh was dissenting, in the minority), to his opinion in a case involving the National Labor Relations Board, in which he voted to reverse the board's decision that undocumented workers qualified as employees and could vote in an election to form a union (again dissenting, in the minority).

Kavanaugh said precedent is part of the stability and predictability of the American legal system. He also said precedent contributes to the independence of judges and the ability of people and organizations to rely on judicial opinions in ordering their affairs.

But Kavanaugh allowed that the high court reverses its own precedents from time to time. He pointed to one such reversal — Brown v. Board of Education, which ended the "separate but equal" doctrine — as "the single greatest moment in Supreme Court history."

He also cited the notion of precedent as controlling what he was willing to discuss with senators during his confirmation hearings. Kavanaugh said his predecessors, including current members of the Supreme Court, when they had been nominees would not answer questions about how they would rule or even if they would take up various "hypothetical cases," including whether the president must comply with a subpoena, or could pardon himself. Pointing to this past practice, Kavanaugh refused to engage on such questions Wednesday when posed by lawmakers.

In a tense exchange before the close of the day's hearing, California Sen. Kamala Harris asked Kavanaugh a direct question about whether he had talked about special counsel Robert Mueller's investigation into Russian election interference with anyone at Kasowitz Benson Torres, a law firm where President Trump's personal lawyer, Marc Kasowitz, is a partner.

"Be sure about your answer, sir," said Harris, who served as California's attorney general before being elected to the Senate in 2016.

What followed was a back and forth in which Harris struggled to get a definitive response from Kavanaugh while the nominee seemed to be trying to circumscribe his answer, suggesting that he did not remember and asking for the name of a specific person in the firm with whom he may have spoken.

"Harris offered no further context for her line of questioning with Kavanaugh, which suggested that he may have discussed an investigation affecting Trump with Trump-connected lawyers but lacked any solid proof.

The only explanation for the back-and-forth came from a Democratic aide speaking on condition of anonymity, who said Wednesday night that some in the party 'have reason to believe that a conversation happened and are continuing to pursue it.'"

It was a long day for all involved, with Kavanaugh being questioned for some 11 hours. And Thursday they're back at it for a second round.