Accessibility links
Mitski Is The 21st Century's Poet Laureate Of Young Adulthood Confessional and funny, boastful and self-deprecating, poetic and profane all at once, Mitski's songwriting captures the experience of youth in the 21st century.

Mitski Is The 21st Century's Poet Laureate Of Young Adulthood

Mitski Is The 21st Century's Poet Laureate Of Young Adulthood 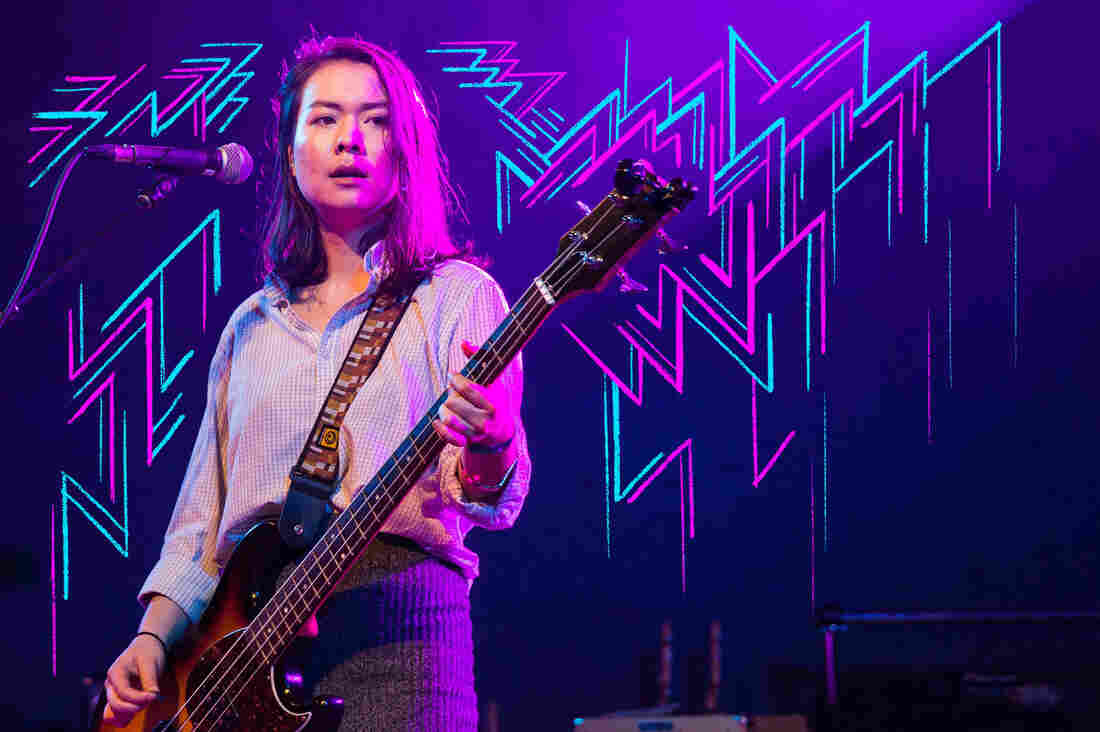 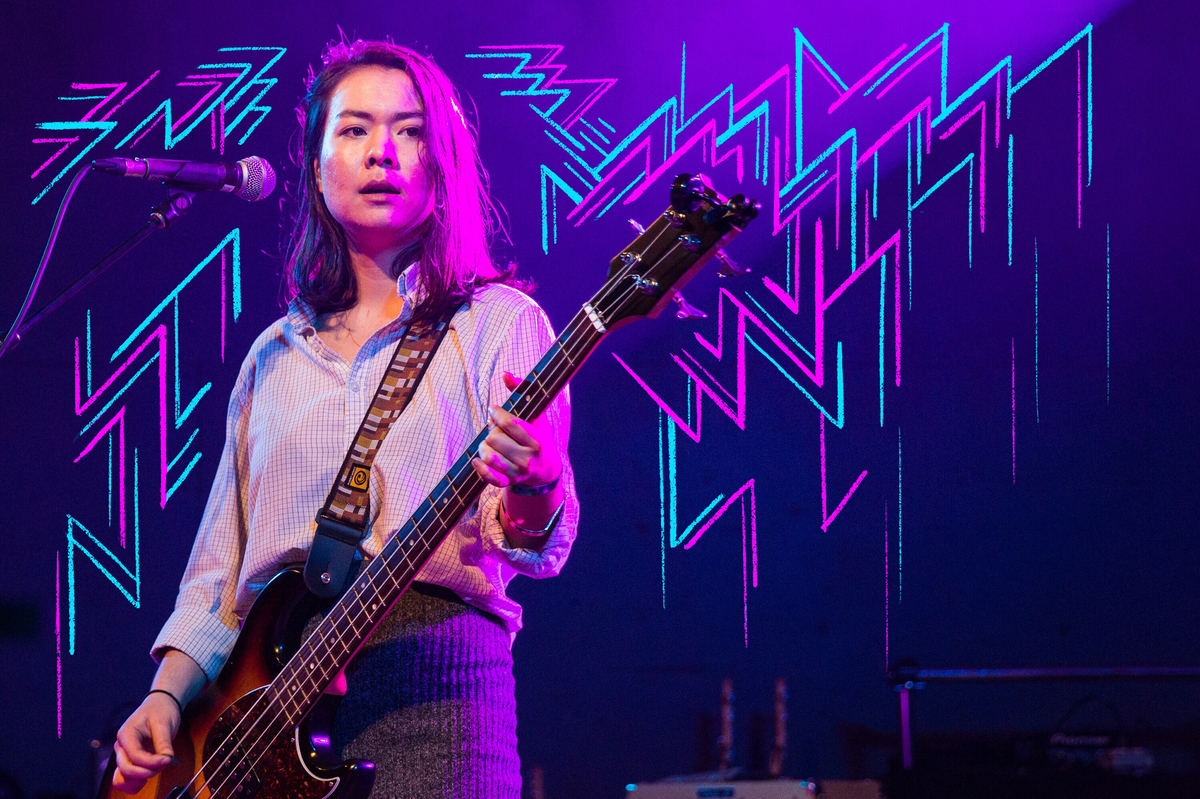 Mitski performs at SXSW in Austin, Texas in 2016.

It didn't take long for Mitski's fifth album, Be the Cowboy, to put her ever-growing phalanx of fans in their feelings. By its release date just a few weeks ago, the lyric "nobody f**** me like me," from the shuffling ballad "Lonesome Love," had become a maxim, drawing equal enthusiasm from critics and on social media. One Twitter user unearthed no fewer than eight posts that included both that particular line and some permutation of the phrase "I felt that."

The lyric goes a long way toward illustrating the deeply personal appeal of Mitski's music—and not just because she has confirmed that it is "true." In only five words, it sums up the specific set of contradictions that makes the singer and songwriter born Mitski Miyawaki so captivating: Confessional and funny, boastful and self-deprecating, poetic and profane all at once, "nobody f**** me like me" is the kind of line you can turn over in your mind for days. For all its bluntness, it's also ambiguous: Is she talking about her prowess at self-pleasure or lamenting that she's her own worst enemy? With Mitski, it's generally safe to assume any double entendre is intentional.

A graduate of the prestigious conservatory at SUNY Purchase, whose long list of famous alumni includes Regina Spektor and Dan Deacon, she is a versatile yet focused composer whose palette is always expanding. While her first two releases, Lush and the Retired From Sad, New Career in Business, leaned on piano, she broke through to the indie crowd with 2014's Bury Me at Makeout Creek (Mitski is extremely good at titles), a guitar-rock record that folded in elements of pop-punk, folk and noise. She mastered the instrument (and bass, which she often plays in concert) on 2016's Puberty 2 — which might have been her career highlight if Be the Cowboy, an album that pushes her voice to the forefront of a mix that prominently features synthesizers, hadn't come along to equal it.

Remarkable as it has been to watch, Mitski's rapid sonic evolution doesn't quite explain why young fans call the 27-year-old musician "mom" — or why, when I consulted Wikipedia's "List of State University of New York at Purchase people" for this essay, she was the only distinguished alum to merit a stealthy (if also temporary) endorsement: "Mitski, literally the most talented artist to exist and the greatest intellectual of the 21st century. Her fifth studio album, Be the Cowboy, comes out August 17th, 2018. Be sure to stream the first three singles, 'Geyser,' 'Nobody,' and 'Two Slow Dancers,' on Apple Music, Spotify, Bandcamp, and Tidal now." I want to be careful about the way I articulate this, because female songwriters are so rarely given the credit they deserve as musicians, but it should take nothing away from her technical skills to say that it is Mitski's words that have made her such a beloved artist. In fact, to exclude her lyrics from any accounting of her technical skills would be to ignore the precision and care that go into them.

I will never forget my first encounter with her music: In bed with my laptop on a Sunday in 2014, I followed a link to a video for Makeout Creek's "Townie" on the teen webzine Rookie. When I pressed play, a young woman who turned out to be Mitski stared back at me, her pose — on her stomach in bed, knees bent, lower legs swaying idly behind her — eerily similar to my own. The coincidence got my attention, but it was the lyrics and the urgency in her voice as she sang them that kept me there for an hour, playing "Townie" over and over. It is a song about inertia, lust, self-destruction and freedom, about the early-20s rut so many people of our generation got stuck in and the ambitions we held onto anyway. Its catchiest lines — "I want a love that falls as fast/As a body from the balcony, and/I want a kiss like my heart is hitting the ground" — encapsulate the violence of nihilistic desire. "I've tried sharing and I've tried caring/And I've tried putting out," Mitski cracks, sardonically repurposing grade-school buzzwords in a cry of romantic frustration. The song closes on a declaration of corporeal independence that still gives me chills: "I'm not gonna be what my daddy wants me to be/I wanna be what my body wants me to be."

Although she filters a broad range of emotions through her introspective, melancholy lens, Mitski is at her most exhilarating on tracks that, like "Townie," seem to drag the listener along with her to some dangerous precipice — a rickety roller-coaster car teetering atop an incline in that endless moment before it plunges to delight or death. "First Love/Late Spring," from the same album, wrings dramatic tension from a similar metaphor: "One word from you and I would/Jump off of this ledge I'm on, baby," Mitski sings in her lethargic yet breathless alto. "I'm a geyser/Bubbling from below," she proclaims in Be the Cowboy's "Geyser," an ode to her all-consuming work. But there's as much anxiety in that frantic chorus as there is excitement.

I think that particular mix of conflicted feelings is what so many admirers found amid the quiet-loud-even-louder '90s alt-rock crunch of her most anthemic single, Puberty 2's "Your Best American Girl." A breakup song that feels like Mitski's take — as a biracial, Japanese-American woman who lived on several different continents as a kid — on Radiohead's "Creep," it finds her staring into the abyss of a doomed relationship before reaching a rare, satisfying resolution: "Your mother wouldn't approve of how my mother raised me/But I do, I finally do."

The journey from precarity to stability and self-acceptance is an obsession of media aimed at young women in the 21st century, the stuff of novels with "millennial pink" covers and TV shows like Broad City and Girls. But Mitski's vision of this phase of life resonates as more perceptive and less self-indulgent than so many others because her music suggests that you don't have to be extraordinarily privileged, narcissistic, or aimless to feel debilitating growing pains. Songs like "Your Best American Girl" and "Townie" render visible a motivated young woman from an outsider background fighting for a platform to express angst that comes, in part, from living in a culture that overvalues lucky peers like Lena Dunham and Stephanie Danler. Caught up in the existential howl that is "My Body's Made of Crushed Little Stars," from Puberty 2 (whose title and cover image of Mitski in a comically long, shapeless white T-shirt evoke the awkwardness of young adulthood), she doesn't even attempt to reconcile fantasy and reality: "I wanna see the whole world" prefaces "I don't know how I'm gonna pay rent," with no "but" to yoke them.

Mitski's ear for vocal melodies and chord progressions that pull your heart up into your throat aren't incidental to her messages; they're the glue that makes them stick in your brain. "I'm kind of a selfish musician who uses music to express something I wanna express," she has said, noting that as an outsider and also as a human being with a finite lifespan, she's determined to use her hard-won platform to represent her experience: "I want to make sure that I communicate to the best of my ability what it's like for me to be alive and feel alive. That is the reason I live."

Mitski's Fiction Is Your Truth On 'Be The Cowboy'

If Dunham hadn't already destroyed that designation, you could call Mitski the voice of her generation — a generation of hybrid identities, for whom a screenshot of a lyric sheet accompanied by "too real" or "literally me" or just a GIF of someone ugly-crying is the highest compliment a song can receive. She certainly has a unique hold on the predominantly young, mostly female and largely Asian-American audience that hangs on her every tweet (she is a natural at Twitter) and sells out her shows. Especially for a writer whose love songs often frame intimacy as a pipe dream, she is remarkably warm and candid with her fans, reciprocating their appreciation and never taking them for granted. "I gave too much of my heart tonight," Mitski sings on "Remember My Name," from Be the Cowboy. "Can you come to where I'm staying and make some extra love/That I can save 'til tomorrow's show?" Both her post-show exhaustion and her compulsion to replenish her supply of love for the next one are emblematic of a performer who feels obligated to be present, body and soul, for an audience that looks up to her.

Still, to frame her as a strictly millennial phenomenon is to ignore both the specificity and the universality of her work. She is singing about being a young, female, Japanese-American rock musician from everywhere and nowhere; she is singing about being a flawed person in a disappointing world. Iggy Pop has called Mitski "the most advanced American songwriter," and all he shares with her is a gift for coaxing beauty of chaos. It's a rare ability that may also be a prerequisite for making penetrating art about young adulthood while you're still a young adult.