Accessibility links
Catholic Schools And Parents Grapple With Whether To Address Abuse Report Some parents and administrators don't feel it's their place to discuss a recent report on clergy sex abuse with young children. But are providing a space for students to voice their concerns.

Listen · 4:06 4:06
Catholic Schools And Parents Grapple With Whether To Address Abuse Report 4:06 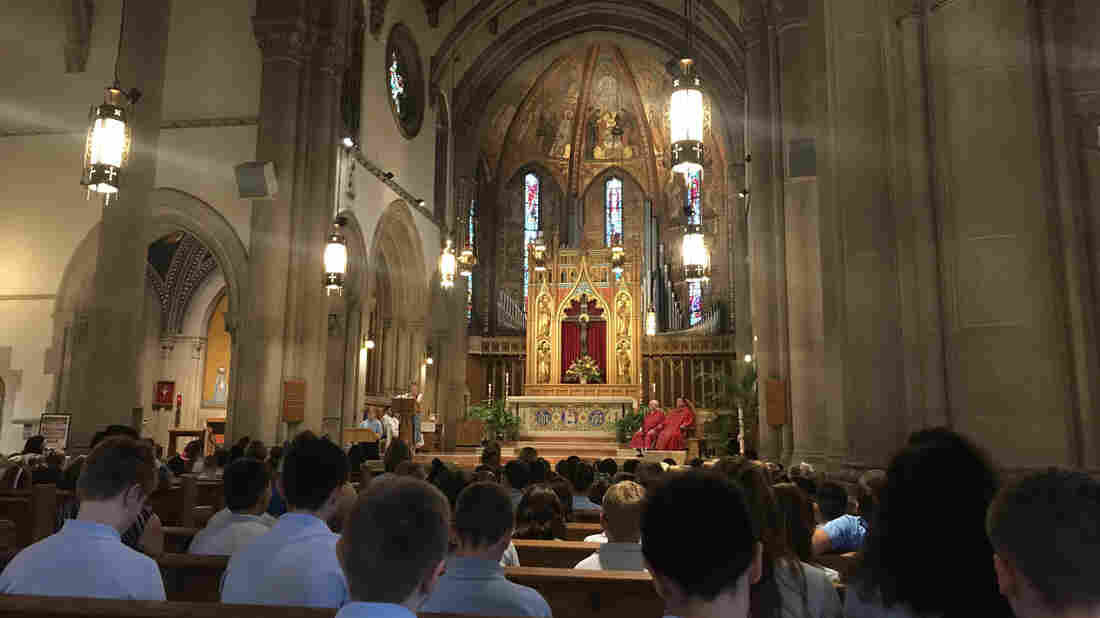 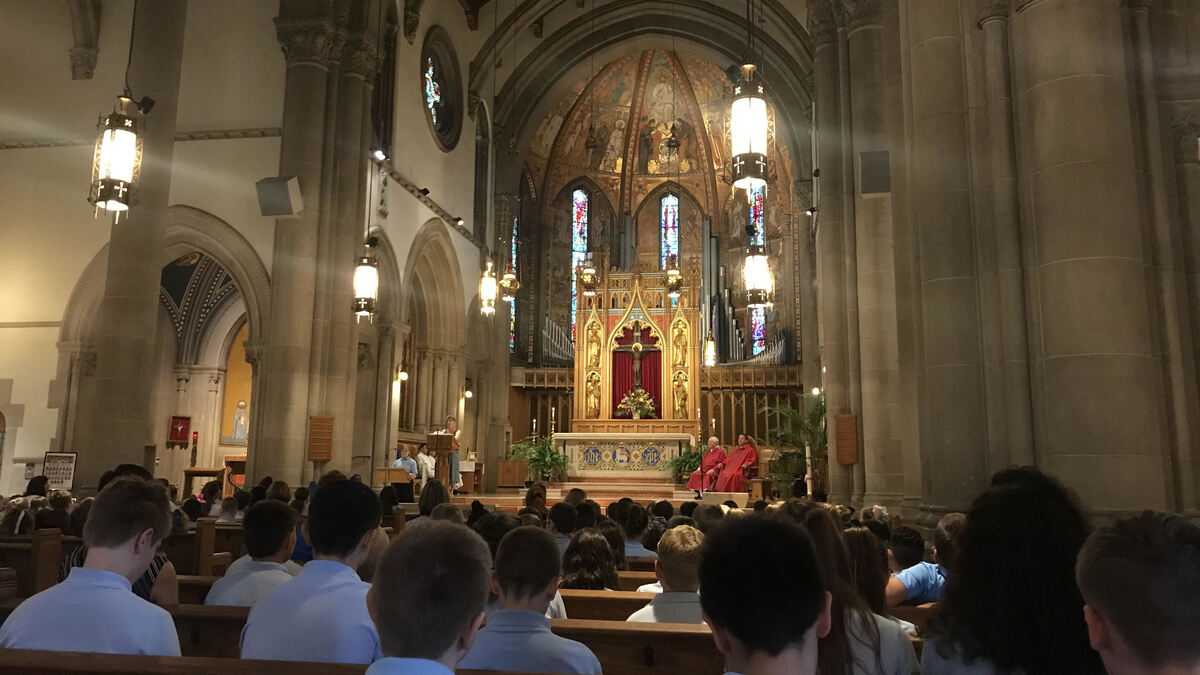 Students assemble for the first Mass of the academic year at St. Bernard School in Mt. Lebanon, Pa.

During the first Mass of the school year, two students at St. Bernard Elementary School in suburban Pittsburgh stand in front of the congregation and lead their classmates in prayer.

They pray for the leaders of the world, for the sick and suffering, and for the victims of abuse in the Catholic Church.

For some kids ... parents don't want them to be aware of this [abuse], and that's the parents' right.

It is the only time clergy abuse is mentioned during the service. It might be the only time it's mentioned in the school. Principal Anthony Merante says he wants to leave that conversation up to parents.

"For some kids — and this is what I'm concerned about — parents don't want them to be aware of this and that's the parents' right. So you're going to bring something up and stir something up that isn't there," he says.

After the St. Bernard Mass, about a half-dozen parents decline to speak on the record because, they say, they either haven't talked to their kids about the clergy abuse or they don't know what to say. Some say they were unsure whether their young children even recognized they had prayed for victims of abuse.

The Pittsburgh Diocese oversees 64 elementary and high schools in six Western Pennsylvania counties. The grand jury report named 17 schools in the diocese where abuse took place. That number could be higher, though. In a handful of cases, the report noted that abuse happened in a school but didn't specify which one. Sometimes children were molested and raped in their school. Other times students were groomed for abuse during the school day.

Across Pittsburgh and the state, Catholic schools and parents are grappling with whether — and how — to address the grand jury report. Some, like Merante, don't feel it's their place to discuss it with young students. But others, including teachers and parents, are providing a space for students to voice their concerns about the report and their faith.

Merante did send a letter from the Pittsburgh Diocese to parents during the first week of school. It reassured parents that "we as the Church are diligent in doing everything we can to provide safety and protection for those most vulnerable among us."

The letter outlines the steps Catholic schools are taking to prevent clergy sex abuse. Anyone who comes in contact with children is required to undergo criminal and sexual misconduct background checks and take a course in how to report sexual abuse as well as another class, "Protecting God's Children," which has a more religion-based approach.

The letter also reminds parents of the curriculum taught in schools as part of the "Catholic Vision of Love Program."

The lessons on love and human sexuality are woven throughout the school year and cover "good touch, bad touch" and the right to say no. The letter says schools also teach children "their role in remaining safe."

"They had been asking for something to reassure parents of the steps schools take to make them safe environments for children as well as the steps they take to educate kids at an age-appropriate manner — just to be aware of suspicious behavior, or things that may be grooming behavior, signs of abuse," he says.

While schools are legally obligated to fulfill many of these requirements, the Pennsylvania grand jury report on clergy sexual abuse that was released last month revealed that abuse happened anyway. The report noted several personnel files for the same priest that contained both a clean background report and a file documenting abuse.

'There's going to be anger'

After morning prayer at Central Catholic High School in Pittsburgh, students in religion class were encouraged to discuss the clergy abuse.

Principal Tony Baginski says teachers are not expected to have the answers. They are expected to listen.

"Not to try and deflect. Not try to explain away," he says. "And there's going to be anger there. There's disappointment. But then also to be honest and to say we also have questions."

Baginski says he gave that same advice to a parent who approached him at school. He says he would generally encourage parents to listen to their child's questions.

That's what parent Maria Aikins is doing. She brought up the report with her kids at the dinner table.

Her younger son is just starting his junior year at Central Catholic. He hasn't had a lot to say. "But he internalizes everything and I know he's thinking about it," she says.

One of her older sons graduated from Central Catholic last year; he thinks it's more of a societal issue than a church problem. "He was more just like, 'I've always gone to church because I go to church for God.' That's how he felt about it," she says.

Should this, you know, make us feel less close to God? Less faith-filled? Less trusting maybe?

Which is a relief to Aikins; she was concerned her kids would question their faith.

"I think that they did think, 'How should we respond? Should this, you know, make us feel less close to God? Less faith-filled? Less trusting, maybe?' But I don't think it has," she says.

Aikins told her sons that priests are people and that their sins should not be an indictment of the church.

Kim Moses also has a son who is a junior at Central Catholic. He also attended a Catholic elementary school. When the grand jury report came out, she looked at it to see whether anyone at the school was named, she says. Central Catholic was not mentioned in the report.

She has mentioned the report to her son. But she says it is hard to know exactly what to say. "Sometimes we say too much. Sometimes you don't say enough. But you've got to say enough to make sure that they understand that that behavior is not only wrong. You know it's illegal. It's harmful. And you have to be willing to speak up if you ever feel uncomfortable in any space," she says.

Moses says she has a close relationship with her son, and in her house, her family often discusses sensitive subjects. But, she says, she might have approached the subject differently if her son were younger.

Pediatrician Mary Carrasco, the director of A Child's Place, an agency in Pittsburgh that provides medical assessments of suspected child abuse, has evaluated about 400 children in the city each year for the past 30 years and has never come across a child who was abused by a priest. She says that in itself is concerning when coupled with the fact that the report alleges that more than 1,000 children were victims of abuse.

"What's different about this report is it seems to be a closed group. That and reports of abuse were not reported following the proper protocol," she says.

She says the grand jury report is drawing attention to detrimental practices in the Catholic Church, but that doesn't mean other parents shouldn't have a conversation with their children as well.

Her recommendation is to have conversations with children early about appropriate behavior and to advise them not to be alone with an adult.

"Parents should tell their children it's OK to say no to things that make you uncomfortable," she says. "I think kids need to learn that they don't have to just blindly follow what feels like an order or feels like 'because this person has authority over me they can just do anything.'"