Accessibility links
Kavanaugh Confirmation Hearings: Senators Dispute Status Of Released Documents Sen. Cory Booker was the first Democrat to release documents that had been designated as "confidential" as the third day of the Judge Kavanaugh confirmation hearings began. 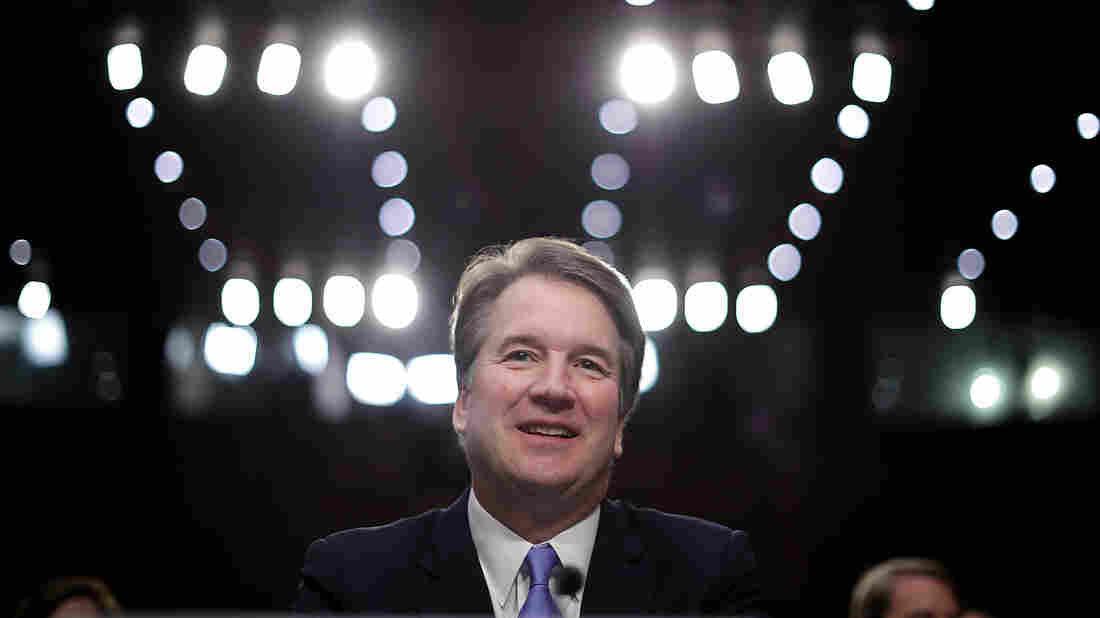 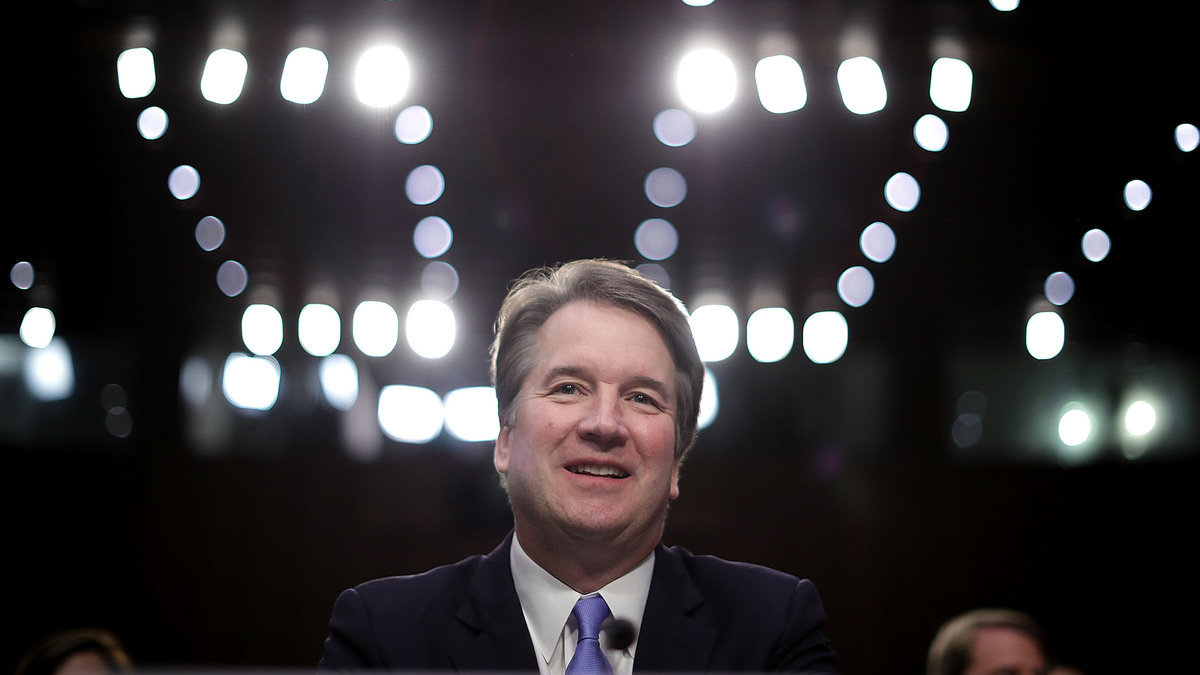 He was pressed once again for his views on presidential power.

Sen. Dick Durbin, D-Ill., sought a promise from Kavanaugh that he would be willing to serve as a check on the president who nominated him.

"Give us some reassurance about your commitment to the democratic institutions in this country, in the face of a president who seems prepared to cast them aside," Durbin said. "Whether it's voter suppression, the role of the media — case after case, we hear this president willing to walk away from the rule of law in this country."

"No one is above the law," Kavanaugh replied. "I've made clear in my writings that a court order that requires a president to do something or prohibits a president from doing something under the Constitution or laws of the United States is the final word in our system."

Sen. Mazie Hirono, D-Hawaii, complained that the Supreme Court had been unduly deferential to President Trump this summer when it upheld his travel ban, despite what she called the administration's "obviously bogus" justification. She pressed Kavanaugh on when the high court should question a president's national security claims.

"National security is not a blank check for the president," Kavanaugh said, pointing to a number of cases in which the court had overruled the administration. "Even in the context of wartime, the courts are not silenced. Civil liberties are not silent."

Kavanaugh told lawmakers he is so committed to judicial independence, he stopped voting in national elections after he became a judge.

"The answer is no," Kavanaugh said.

As he's done throughout the hearing, Kavanaugh declined to answer a series of questions from Harris about issues that might come before the high court, including abortion, same-sex marriage and immigration.

"Through long hours and days of questioning, Judge Kavanaugh consistently reinforced his firm belief in the bedrock principles of judicial independence and the rule of law," deputy press secretary Raj Shah said in the statement.

Kavanaugh was asked repeatedly during the televised hearing about whether he would support opening the Supreme Court to TV cameras. He promised to keep an open mind, but said he would also want to consider the views of the eight current justices.

Thursday's session began with Democrats on the committee in open revolt over the handling of documents from Kavanaugh's tenure in the George W. Bush White House.

Some documents have been withheld altogether. Others have been provided to the committee on "confidential" terms, meaning senators can see them but they can't be made public.

Democrats object that the confidential label has been applied to a wide swath of records, many of which contain no personal or sensitive information. They also complain that classification decisions were made by former President Bush's attorney, William Burck, a former deputy of Kavanaugh's.

"This is no different from the senator deciding to release classified information," Cornyn said Thursday morning. "No senator deserves to sit on this committee, or serve in the Senate, in my view, if they decide to be a law unto themselves and willingly flout the rules of the Senate and the determination of confidentiality and classification."

For all the theatrics on both sides, the debate over documents fizzled by Thursday afternoon, once it became clear their release had been authorized by Bush's attorney overnight.

"We cleared the documents last night shortly after Senator Booker's staff asked us to," Burck said in a statement. "In fact, we have said yes to every request made by the Senate Democrats to make documents public."

And an aide to Grassley told NPR that "counsels for the senators who requested waivers last night/this morning for particular documents were notified that their requests had been honored beginning at around 3:50 this morning."

But a spokesperson for Hirono said the senator was not informed that the documents released by her office Thursday morning had been approved to be made public.

It is not clear whether Booker knew the documents he released had already been approved before his statements Thursday morning at the beginning of the hearing — when he said that his decision to release the documents was a form of civil disobedience and that he was aware he was risking expulsion from the Senate for making the documents public. 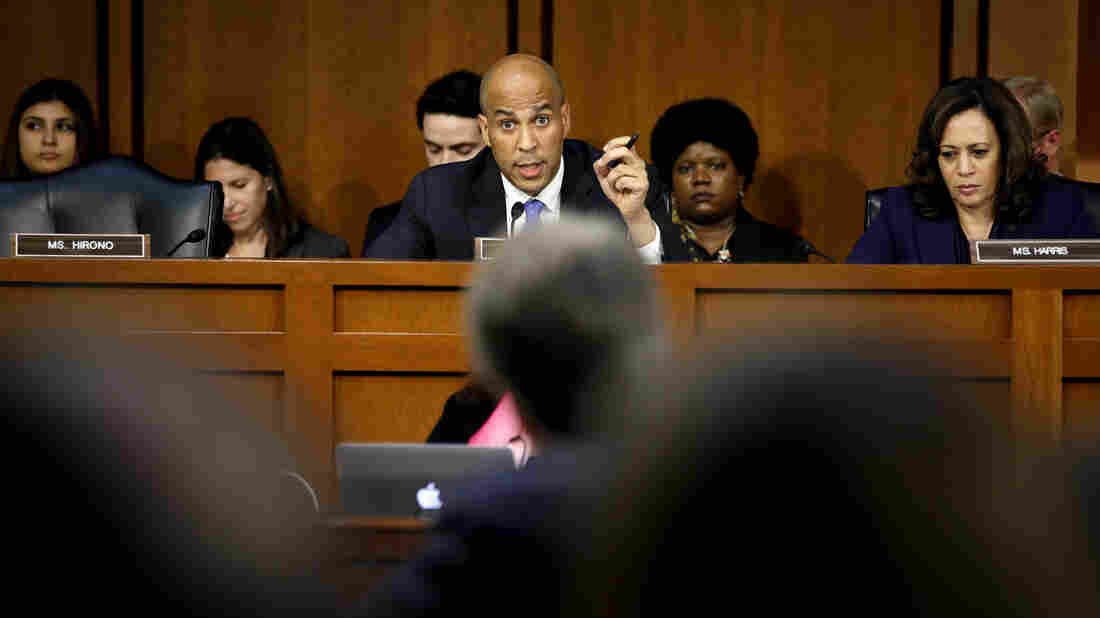 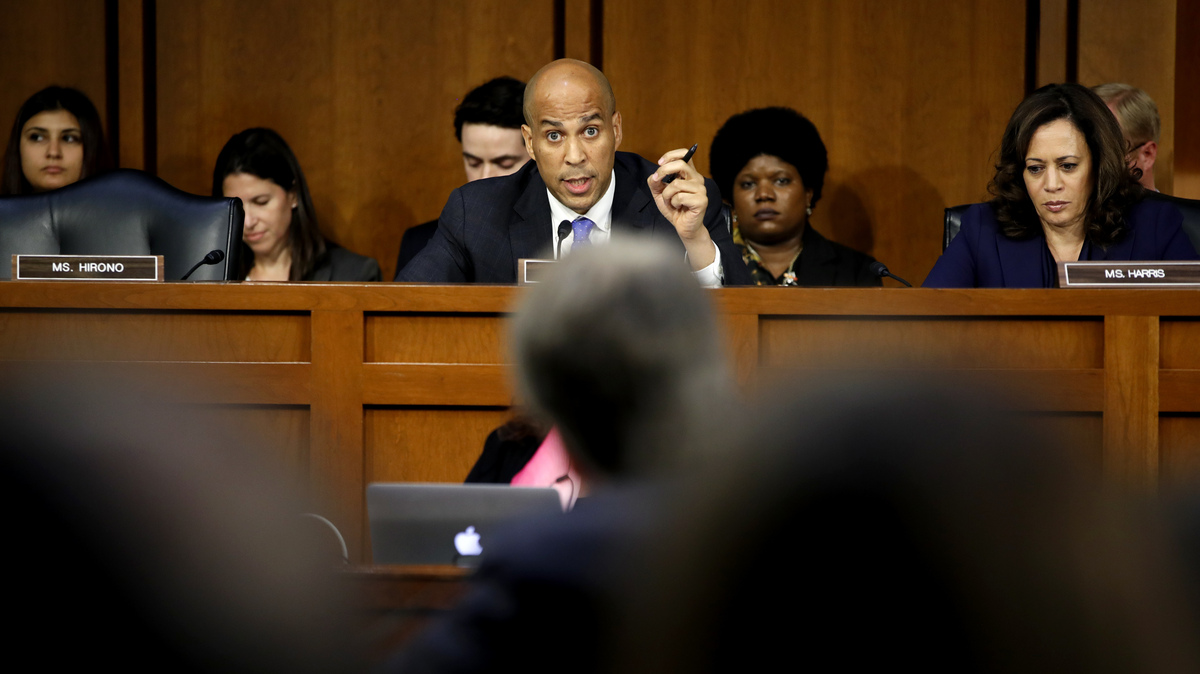 The documents released by Booker include a batch of emails concerning racial profiling, affirmative action and other race-conscious government programs.

In a 2002 email, Kavanaugh wrote that security procedures adopted in the wake of the Sept. 11 attacks should ultimately be race-neutral, though he acknowledged that developing such procedures could take time. Others in the White House suggested racial profiling might be legally justified if it enhanced security.

In a 2001 email, Kavanaugh addressed a legal challenge to an affirmative action program within the Department of Transportation.

"The fundamental problem in this case is that these DOT regulations use a lot of legalisms and disguises to mask what in reality is a naked racial set-aside," he wrote.

Kavanaugh had sidestepped questions from Booker on Wednesday night about the circumstances in which government can and cannot use race-conscious measures to address past discrimination.

He conceded that hopes he expressed nearly two decades ago for a color-blind society have not been fulfilled.

"We see on an all-too-common basis that racism still exists in the United States of America," Kavanaugh said. "Our long march to racial equality is not over."

Separately, The New York Times reported on leaked emails from the "confidential" file. One is an email drafted by Kavanaugh in 2003, in which he questioned whether the Supreme Court's 1973 Roe v. Wade decision legalizing abortion should be described as "settled law of the land."

Pressed on that email by Sen. Dianne Feinstein, D-Calif., on Thursday, Kavanaugh explained he was simply summarizing views of legal scholars and not offering his own view.

On Wednesday, Kavanaugh said he understands the weight that many people attach to Roe. But he declined to say whether that case was properly decided.

Throughout the hearing, Kavanaugh has avoided commenting on Trump's behavior, despite urging from Senate Democrats.

"I'm not going to get within three zip codes of a political controversy," he said Thursday, when Sen. Richard Blumenthal, D-Conn., asked him about Trump's attacks on judges, including Supreme Court Justice Ruth Bader Ginsburg.

"I've spoken about my respect and appreciation for the eight justices on the Supreme Court," Kavanaugh said. "I know they're all dedicated public servants who have given a great deal to this country."

Barring surprises, Kavanaugh appears likely to win confirmation in time to take his place alongside those eight justices when the Supreme Court begins its fall term next month.

An earlier version of this story said Sen. Patrick Leahy, D-Vt., released classified documents along with Sen. Cory Booker, D-N.J., and Sen. Mazie Hirono, D-Hawaii, but Leahy's office says he knew his documents had been cleared for release before he made them public.