Accessibility links
'A Room Away From The Wolves' Makes The Gothic Bitingly Modern Nova Ren Suma takes all the classic Gothic novel tropes — an old house, a cursed ring, evil stepsisters, a dark family legacy — and gives them a bracing update in A Room Away From the Wolves.

'A Room Away From The Wolves' Makes The Gothic Bitingly Modern

'A Room Away From The Wolves' Makes The Gothic Bitingly Modern 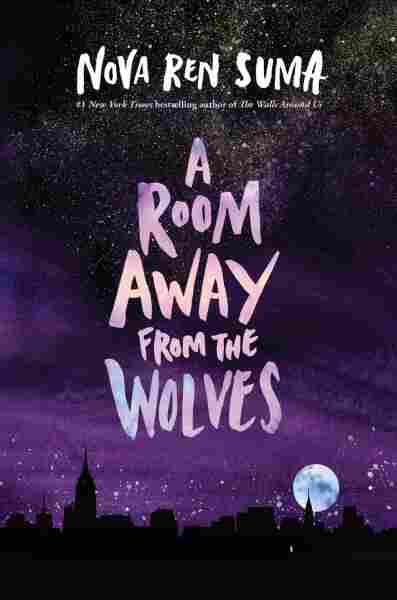 A Room Away from the Wolves

Title
A Room Away from the Wolves
Author
Nova Ren Suma

In A Room Away from the Wolves, angry, complicated girls get entangled in a Gothic mystery with all the classic elements — an old house, a cursed ring, a legacy handed from mother to daughter — but Nova Ren Suma manages to take these tropes and transform them into something modern and biting that lingers far beyond the final page.

When Bina and her mother ran away from her abusive father, they were supposed to end up in New York City. But instead, they moved in with another man and his two daughters, whose intense hatred of Bina is like something out of a fairy tale. As the years pass, it gets worse and worse, until Bina's mother decides to pack her off to stay with church friends until things settle down.

Bina has other plans. After crashing a party to give her evil stepsisters one last thing to hate her for, she takes off for New York City. She's headed to Catherine House, the women's boarding house where her mother stayed before getting pregnant with her. She knows there's a room available, and she wants to experience the freedom her mother had before Bina came along and messed up her life.

But Catherine House is not quite what she expected. First there's the contract and vow of confidentiality she is asked to sign, then the whispers and strange looks from the other residents, and perhaps strangest of all, the creepy portrait of Catherine de Barra, which subtly shifts every time Bina looks at it. It proves difficult to get close to the other girls, but she's intrigued by Monet, who lives in the room beneath hers and seems to be trying on a new persona every time they meet.

'The Hazel Wood' Has Few Uses For Enchantment

Before long, it becomes clear that freedom is not something that comes easy to the residents of Catherine House. As Bina's lease draws to a close, she begins to wonder if it's even possible to leave, and the tangled demons of her past rise up to strangle her.

Like Suma's last book, The Walls Around Us, A Room Away from the Wolves is not your standard Young Adult fare. Her narratives are subtle, quicksilver creatures, her language is elegant, and her characters keep more secrets than they reveal. If this book was a dessert, it wouldn't be a chocolate chip cookie or a vanilla birthday cake — it would be an earl grey lavender macaroon, or maybe balsamic fig ice cream. It isn't the usual flavor, and that's what makes it so exciting.

In truth, there is very little plot or external conflict on the line here. Bina's struggles are largely with her own emotions, her memories, and her ability to connect with other people. There is a ticking clock in the form of the end of her lease, but even that begins to fade in importance as she is consumed by Catherine House. Everything hinges on her ability to reconcile all the stories that she's been telling herself over and over and see the true narrative underneath.

If this book was a dessert, it wouldn't be a chocolate chip cookie or a vanilla birthday cake — it would be an earl grey lavender macaroon, or maybe balsamic fig ice cream.

Bina is a difficult character, who lies to herself as much as she does to the reader and everyone she meets as she stomps belligerently around Catherine House. Likewise, Monet is abrasive and elusive, too cool for explanations or apologies. They really shouldn't be compelling people to spend time with, but in Suma's deft hands, their flaws make them beautiful. There's a ring, a black opal, that features importantly in the story, and to me it becomes a metaphor for all the beautiful, flawed girls who populate this book, trying to break free of a setting that doesn't fit.

A Room Away from the Wolves is not willing to spell things out for the reader. By the time I reached the ending, the mystery of Catherine House still felt quite shrouded, and the revelations of the narrative left me with more questions than answers. I found I didn't mind, though. So often, in books about strange houses full of stranger people, we are given too much explanation. Sometimes it's more satisfying to be left wondering, haunted by compelling questions instead of disappointed in inadequate answers. Though it remains elusive, A Room Away from the Wolves does not disappoint.