Accessibility links
Why Evil Nuns Have Tormented Audiences For Centuries Bless us, Sister, for audiences will have the living bejesus scared out of them when The Nun opens in cinemas nationwide on Friday. 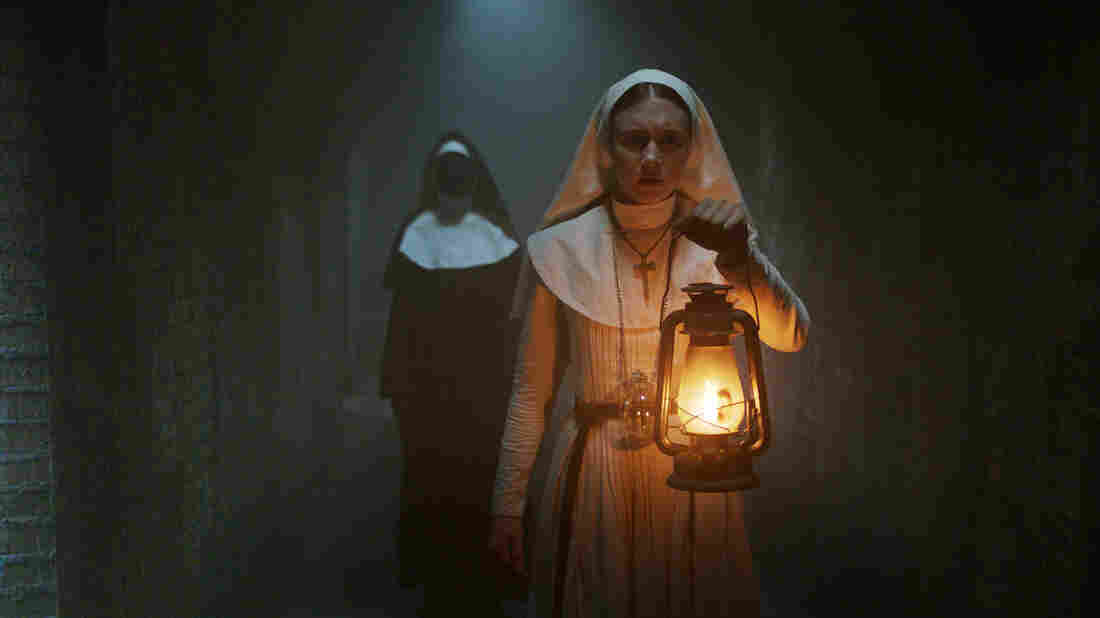 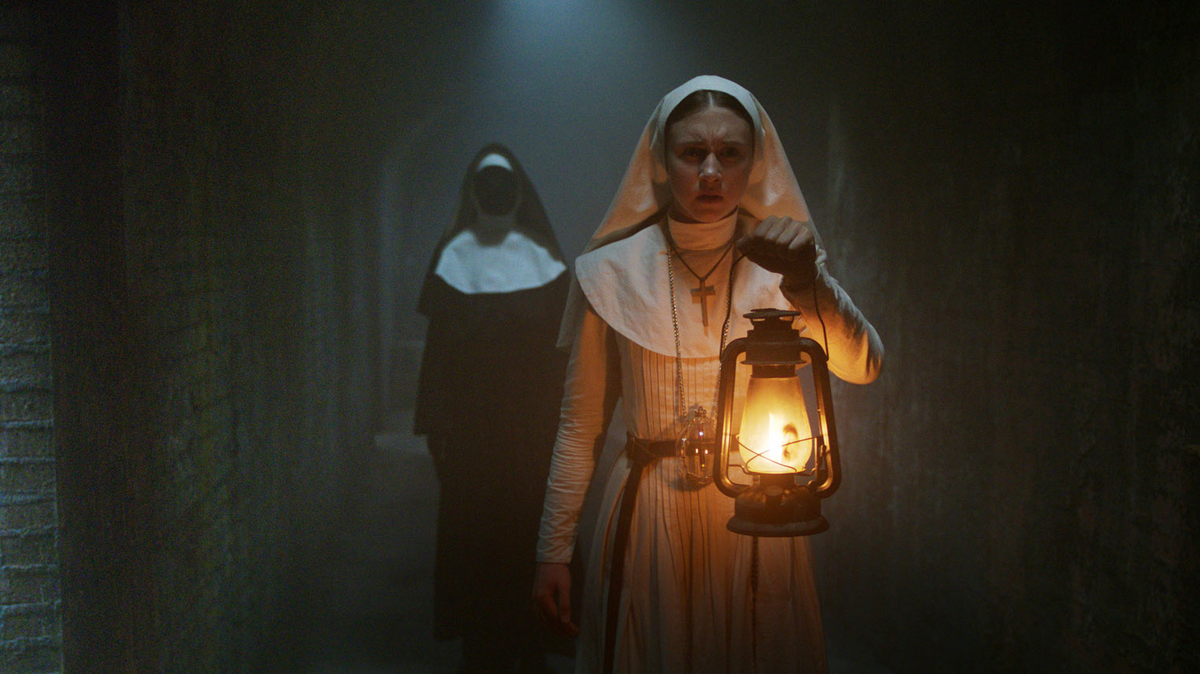 The coming crop of Halloween horror films star a lot of the usual scary suspects — the alien with a taste for humans (The Predator), the haunted house, or RV, (The Toybox) and even that old bogeyman, Michael Myers, who has been slashing his way through 10 installments of the Halloween franchise for 40 years.

But none of those standbys has anything on a new film featuring one of the scariest and blood-chilling of horror tropes that has tormented moviegoers, television viewers and even readers of literary fiction for centuries.

Bless us, Sister, for audiences will have the living bejesus scared out of them when The Nun opens in cinemas nationwide on Friday. It revolves around a demonic nun named Valak who terrorizes a Romanian abbey and an investigation of a suicide there.

The film is part of The Conjuring film franchise, which debuted in 2013. The Valak, played by Bonnie Aarons, in habit and with iceberg eyes, appeared in The Conjuring 2 and now gets her own spooky spinoff.

The director of The Nun has childhood memories of visiting a great aunt who was a nun and taking her out for ice cream. For 43-year-old Corin Hardy, there is something about the hooded habit and the need to look beyond it to see good or evil that makes nuns a great horror trope.

"It comes down to the fear of the unknown," he said in a telephone interview from Los Angeles, where he was preparing for The Nun's premiere. "I think it plays with people's rules. I guess, ultimately, if you are a religious person and you have strong faith, you don't have that fear. But I think a lot of people are not sure and making a horror movie such as this makes it possible to create tension around that."

"One reason for the popularity of the evil nun trope is simply that nuns are concealed," said Kathrin Trattner, a German scholar of religion and film. "The nunnery is not accessible, especially to men, and their bodies are veiled. This brings forth fantasies of what potentially shocking secrets may be hidden behind these impenetrable walls."

Scholars trace the trope to at least the 14th century. Geoffrey Chaucer's The Canterbury Tales shocked and titillated readers with Madame Eglantine. Though the character wasn't frightening, it was surprising to see a supposedly pure, innocent and holy nun presented hypocritical and corrupt.

By the Protestant Reformation, widely distributed pamphlets described ritual cannibalism and sacrifices to Satan supposedly going on behind convent walls.

By the 18th century, Denis Diderot thrilled French readers with La Religieuse, a novel in which a young novice recounts convent-sanctioned sadism. In the 19th century, two faked memoirs, The Awful Disclosures of Maria Monk and Six Months in a Convent, served up sexual abuse and infanticide inside nunneries.

So when films flourished in the 20th century, the evil nun trope was well-established and ready for the Hollywood treatment. Haxan, a 1922 silent film featured a leering devil goading sisters to evil deeds, and 1947's Black Narcissus had a whole cloister of nuns embroiled in lust, jealousy and insanity.

The trope was so popular by the 1970s that it started to give rise to so-called "nunsploitation" films. These often low-budget flicks in the '70s, '80s and '90s had lurid posters, B-list stars and titles like Demonia, The Other Hell and The Sinful Nuns of St. Valentine.

At about the same time, the evil nun morphed into the mean nun in comedies, like Sister Mary Stigmata, aka The Penguin, who torments The Blues Brothers Dan Aykroyd and John Belushi in 1980.

Douglas Cowan, a Canadian professor and author of Sacred Terror: Religion and Horror on the Silver Screen, calls religion and film "cultural siblings" in that they allow us to explore "the ambivalent relationship between the sacred and the profane."

"Horror allows us to ask the questions religion claims to have answered — where do we come from, where do we go after death?" Cowan said. "But the idea that we keep asking these questions through horror means we are never entirely satisfied with the answers."

The recent flood of films, television and books that showcase the evil nun trope come at a time of some ambivalence toward religion. Meryl Streep played a iron-willed nun in the film Doubt (2008); Jessica Lange played a sadistic nun at an insane asylum on American Horror Story: Asylum (2012); and in her most recent novel, The Ninth Hour, Alice McDermott's nuns do things that will send them straight to hell.

Theresia Heimerl, a German scholar of religion and film, said characters like these are sometimes not-so-veiled criticism of religion and, specifically, the Catholic Church. She points to movies like 2002's The Magdalene Sisters, an Irish-British film in which "troubled" teenage girls are enslaved in a nun-run laundry. Such laundries existed and incarcerated thousands of women against their wills.

"The evil nun contributes to a picture of the Catholic Church as a morally rotten organization, where bad things happen under a veil of holiness," Heimerl said. "But I think it is important to watch them and distinguish between the trope for mere entertainment, as in American Horror Story and for legitimate critique, as The Magdalene Sisters."

Still, Hardy, director of The Nun, is hedging his bets. After a recent screening of in Mexico City, a nun named Sister Rose Pacquette gave him a small rosary ring.

"I think she said it was to protect me from evil," he said. "So I am wearing it."

An earlier version of this story incorrectly stated that Michael Myers wore a hockey mask in 11 Halloween movies. Myers wore a different mask and was featured in 10 Halloween films. In addition, the story said The Conjuring franchise is about a devilish doll. The demonic doll is the focus of the spinoff Annabelle movies. The article also downplayed the role of Valak in an earlier Conjuring movie. Finally, the story suggested The Canterbury Tales were written in the 13th century. The collection was written at the end of the 14th century.