Accessibility links
Shadowed By Scandals, Coach Rick Pitino Pens His 'Story' The Hall of Fame college basketball coach, fired by the University of Louisville in 2017 following recruiting violations, addresses his career and recent headline-grabbing mistakes in a new memoir. 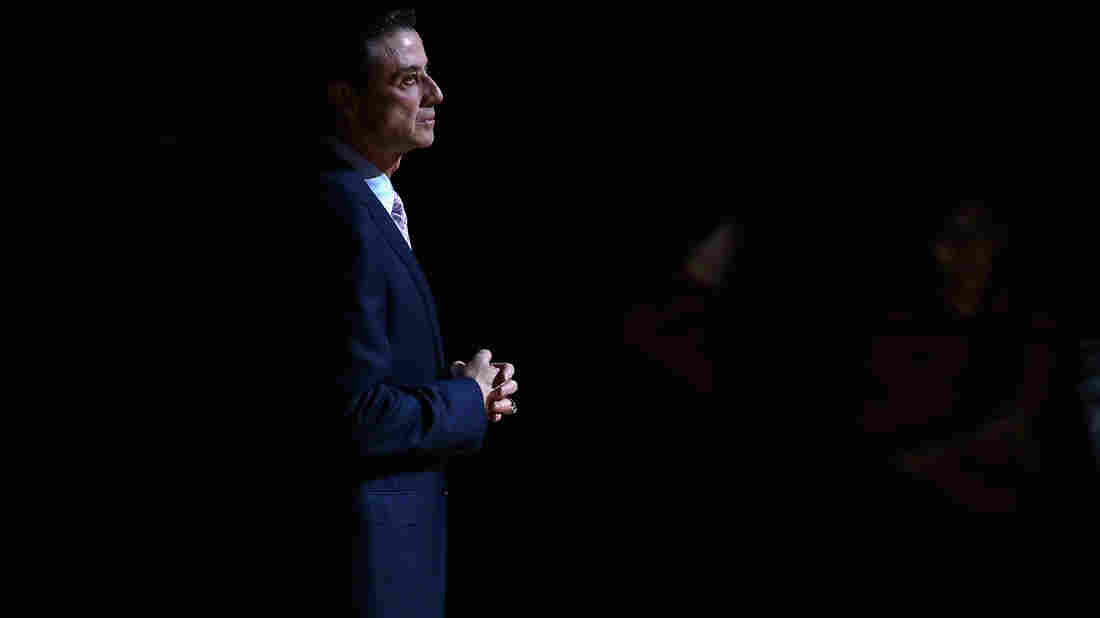 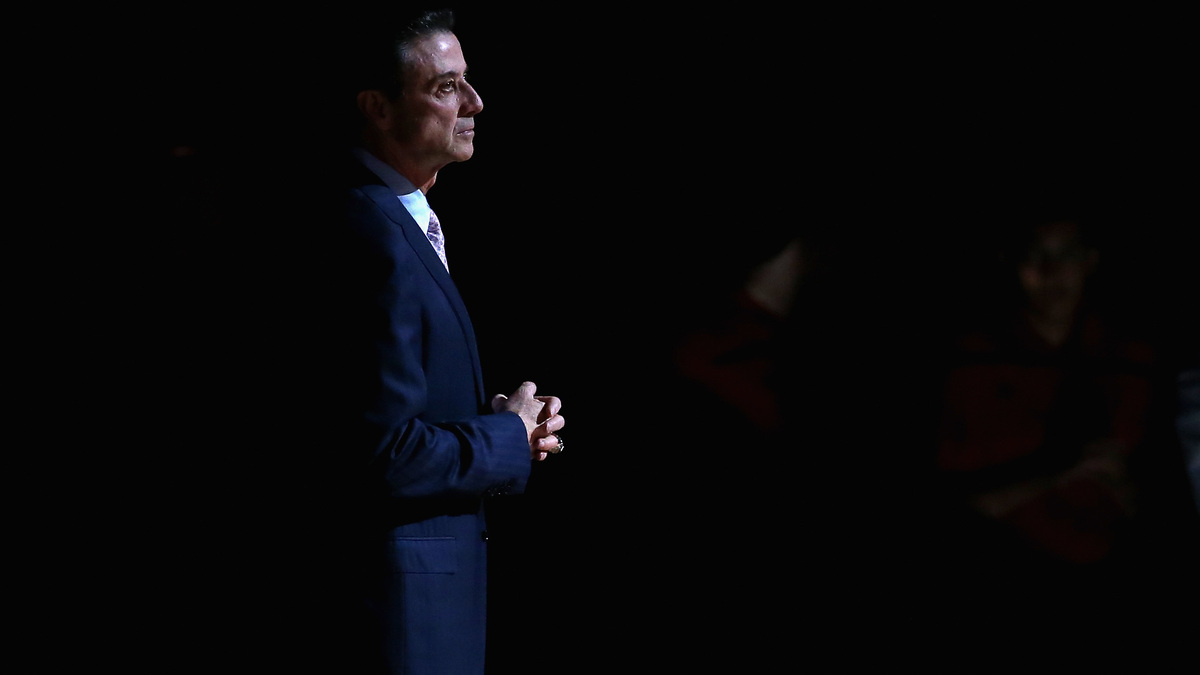 Rick Pitino receives a pre-game introduction at a Louisville Cardinals basketball home game in late 2015. The former coach has written a new memoir addressing the scandals that plagued his tenure at Louisville.

Rick Pitino has an amazing record in college basketball. He coached three different teams — at Providence College, the University of Kentucky and the University of Louisville — to the Final Four of the NCAA Tournament. He's a member of the Basketball Hall of Fame.

But Rick Pitino is also the only NCAA men's basketball coach to have a national championship taken away. His Louisville Cardinals team was stripped of its 2013 national title because an investigation found recruits to the team had been offered sex with paid escorts. And coach Pitino was let go by Louisville last year when federal prosecutors revealed a player named Brian Bowen was recruited after an Adidas executive offered his family $100,000.

Rick Pitino's basketball sense and skills are perhaps unparalleled. So are some of the scandals that surround him, including a case in Louisville in which the coach admitted to sexual involvement with a woman who tried to blackmail him.

"People do have to fight, and fight hard to get through adversity," he says in an interview. "And I'm certainly one that's been through a lot in the last two or three years and I sort of have a Ph.D. on it right now. But I am very upbeat, very positive about the future."

He has written his version of some of those events in the book Pitino: My Story, with co-author Seth Kaufman.

On if he believes that he will ever coach again 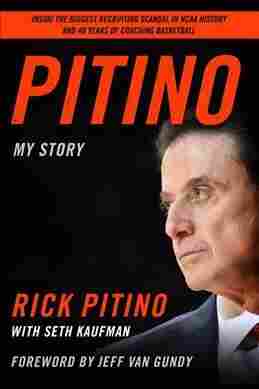 by Rick Pitino and Seth Kaufman

I don't. And I'm basically trying to motivate myself to not only put closure on a career, but to get going with something else. I've said for years: Idleness is the devil's workshop. So I always tied up my day, every minute of the day from 6 a.m. to late at night, with basketball scouting, recruiting. And now I wake up at 6 o'clock and put on my gym shorts and there's no place to go.

Pitino: Well, it was news to everyone. It was news to the other — the full-time assistant coaches. That being said, they were women that would look like college kids. They were snuck through a side door, mostly. They dressed like college girls. Security didn't see anything out of the ordinary.

Simon: To get to, I think, the crux of what the [NCAA] report upbraided you about: You met many of the parents or guardians of these young potential recruits who came to campus. You are the legendary coach Rick Pitino. Wasn't it part of your responsibility to protect them and know where they were every hour and minute?

Pitino: Well, I'll I go back to when I was an athlete. And the answer is yes and no. The answer is: Yes, I'm responsible for all the actions that go on, for all the people that work for me. But as an athlete, when I visited — I believe I visited 13 colleges out of high school — the coach would take the family out to dinner, and then you'd go out with the players. And you'd either go to a social party, you'd go to some event, and then the next day the coach would ask you what you did, did you have a good time. And no different than when you speak to your parents: "What did you do last night? "Went to a party, dad." "Did you have a good time?" "Yes."

So when the NCAA said to me: Did you notice any red flags? I said: I sat down with the family for two hours, asked the young man everything he did that night, and for a two-hour morning meeting, we discussed everything. So should I have known what went on at 1 or 2 o'clock in the morning? I wish I could have, because something would have been done about it.

One hundred percent. But here's what you have to realize. I owned up not only to my family, which was hurt deeply by my indiscretion 14 years ago. But the other stuff — I have to tell you, as a leader, I'm completely innocent of any wrongdoing except the fact that I mentored people that did not do the right thing. So you alluded to earlier about the [2013 NCAA] championship coming down — the championship can never come down. That's part of history. You can take a banner down, but you can't take the championship away because there was no performance-enhancing drugs, there was no phony classes, there was no steroids being used, no gambling on the games.

Pitino: Ninety percent, if not more, of college coaches not only educate their players on the court — they build lifelong friendships. They mentor their young men. They help them get jobs. Unfortunately, the ones that get the most noise are people like myself involved in this scandal that comes across as if college basketball is corrupt. And it's really not. Four years ago I went on a tremendous rant about shoe companies getting involved in the recruiting business.

Simon: And even as you note in the book, the shoe companies have in other ways been pretty nice to you.

Pitino: They have — they have paid me millions of dollars. That being said, at the lowest levels, when you are a great player, and you're a freshman or a sophomore in high school, the agents are already targeting you, your family, your uncles, your cousins. If you then reach your potential as a possible professional basketball player, they're already in the door at a very young age.

On objectors to Pitino's motivational speaking engagements, given his recent history

Well, prior to the last two years, I probably have given close to 3,000 speeches on leadership. And in the last two years when the scandal broke, I could agree with those people who are critics and critical of me. But all I can do is tell the truth, and that's why I wrote this book. I probably am not going to give the amount of speeches I once gave, but that's OK. I have to overcome this adversity myself.

And I wish I had an unblemished record. But I did it the right way for a long period of time. And I hired over 30 coaches that have gone on to be successful head coaches. I mentored the first female coach to sit on a Division I bench, Bernadette Locke[-Mattox]. And they all did fabulous jobs. And the last few hires I made apparently were the wrong hires, even though I mentored them the same way I mentored everybody else. So I had to live with that. It is my destiny, so to speak, but I also have to continue on and try to be the best at what I can possibly be.

Peter Breslow and Ed McNulty produced and edited this interview for broadcast. Patrick Jarenwattananon adapted it for the Web.