Accessibility links
Climate Change Drives Bigger, Wetter Storms — Storms Like Florence Hurricane Florence — large, slow and full of moisture — is threatening to inundate the Southeast. It's a type of storm that's getting more likely to form. 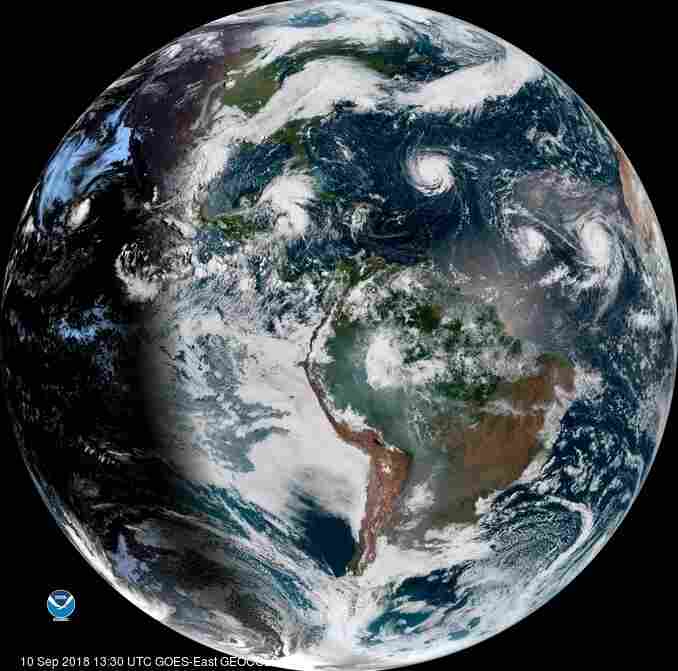 A satellite image from Monday shows Hurricane Florence as it travels west and gains strength in the Atlantic Ocean. Hurricanes Isaac and Helene have also formed off the coast of West Africa. NOAA/GOES/Getty Images hide caption 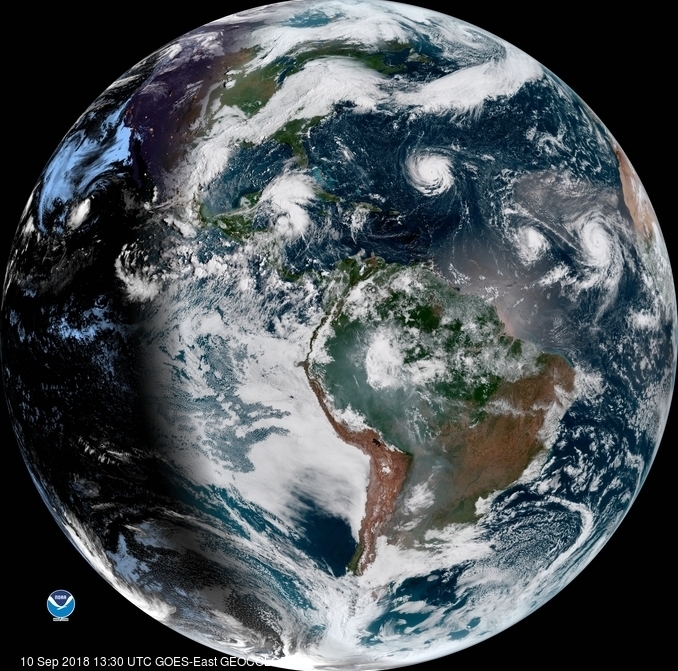 A satellite image from Monday shows Hurricane Florence as it travels west and gains strength in the Atlantic Ocean. Hurricanes Isaac and Helene have also formed off the coast of West Africa.

Hurricane Florence is moving relentlessly toward the Southeastern U.S. It's a large, powerful cyclone that will likely bring storm surge and high winds to coastal communities.

But climate scientists say one of the biggest threats posed by Florence is rain.

"Freshwater flooding poses the greatest risk to life," explains James Kossin, an atmospheric scientist for the National Oceanic and Atmospheric Administration and the University of Wisconsin, Madison. And Florence could cause extensive freshwater flooding for two reasons.

First, Florence is moving slowly and could all but stop when it reaches land.

"The storm could be over North Carolina and traveling incredibly slowly — on the order of just a few miles per hour," explains Kossin, who says an official from the city of Charlotte, N.C., contacted him about rainfall projections for that city.

If Florence stalls over the Southeast, it would be reminiscent of Hurricane Harvey, which spent days dumping rain on the Houston region last year. Some areas ended up with more than 60 inches, a catastrophic amount of water that shut down the entire region and resulted in at least 93 deaths.

Slow-moving storms like Harvey are getting more common. A study published earlier this year by Kossin found that tropical cyclones around the world have slowed down 10 percent in the past 70 years.

"We're seeing that in every ocean basin except the northern Indian Ocean," says Kossin, possibly because climate change is causing the wind currents that hurricanes ride to slow down. If Florence slows down and stalls when it hits land, it will be the latest example of that trend.

Kevin Trenberth of the National Center for Atmospheric Research in Boulder, Colo., says global warming also affects the size and intensity of storms like Florence.

"We have global warming, and so this actually makes these storms bigger and more intense," he explains. Humans burn fossil fuels in our cars, our power plants and our airplanes, all of which release greenhouse gases that trap heat. Warmer oceans, especially, provide fuel for hurricanes in the form of evaporating moisture.

"The oceans are warmer now than they've ever been, and they're going steadily upwards," Trenberth explains. In a study published in May, he and colleagues found rain from Hurricane Harvey was powered by the highest ocean temperatures ever recorded in the Gulf of Mexico.

Right now, the part of the Atlantic under Florence is slightly warmer than usual, and the area north of the storm is significantly above normal, he says.

Together, the increased size and the slower forward motion of storms like Florence spell potential flood disaster for communities in their path. Florence could be like a faulty sprinkler, stuck watering one area for days on end.

"This idea, first of all, of a very strong hurricane making landfall is always going to be very, very bad news," says Kossin, "but then adding the potential for it to stall out once it hits land — that's a very, very frightening prospect to think about."