Accessibility links
Appreciating The Unfinished Legacy Of Mac Miller The 26-year-old, who died Sept. 7, will not be remembered as a drug-addled entertainer, but as an ever-evolving maker of music who supported those coming up behind him. 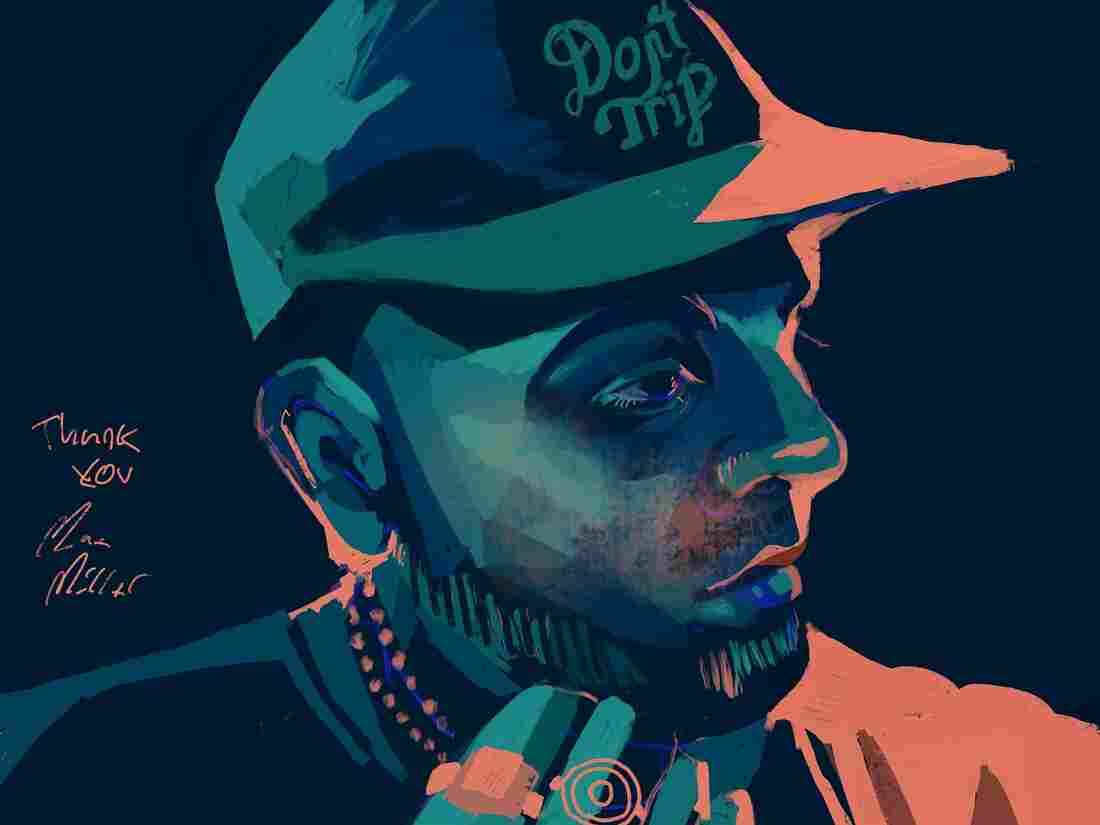 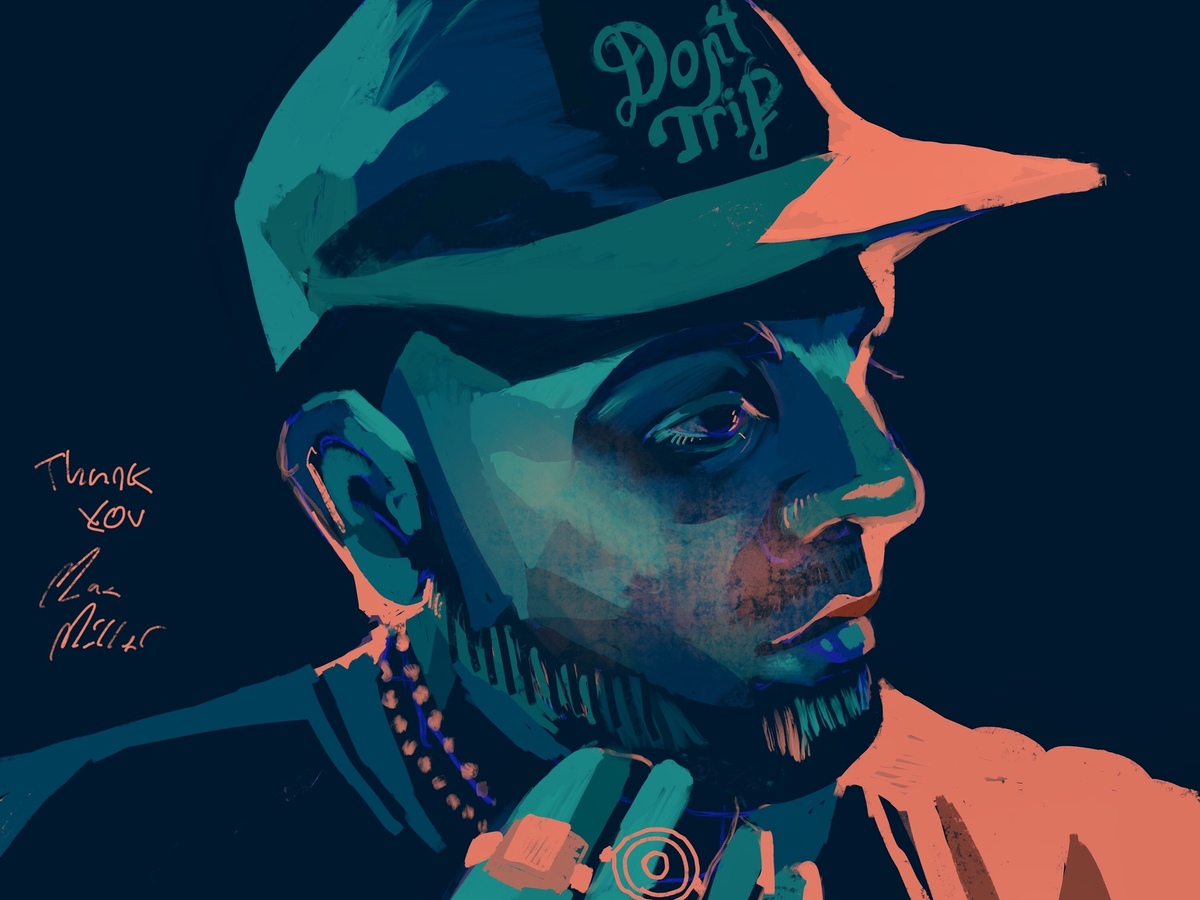 An illustration of Mac Miller, drawn during his Tiny Desk Concert performance in Aug. 2018.

Last Friday, rapper and producer Mac Miller, born Malcolm James McCormick, was found dead in his San Fernando Valley home. His fans, who had heard Miller openly address drug use in interviews and in his music for years, immediately speculated that the cause was an overdose, though postmortem toxicology tests have not been released. Reactions to the news — from peers like Drake, Childish Gambino and J. Cole, relative newcomers like Ugly God and Lil Xan and titans from outside hip-hop like Elton John and Solange — were echoes of one another, invariably describing him as a sweet, easygoing individual with an innate gift for music.

Growing up in Pittsburgh, Mac Miller was trained in piano from the age of 6 and went on to teach himself drums, guitar and beat production. His earliest releases, especially his breakthrough 2010 mixtape K.I.D.S. on the Pittsburgh indie Rostrum Records, belied an appreciation for '90s boom-bap and an endearing, infectious and, at times, naive outlook on life. Above all else, his early work represented the fumbling freedom of adolescence — skipping school, finding a first love and dreams of getting rich through rap. But as he matured, on albums such as Watching Movies with the Sound Off, The Divine Feminine and this summer's Swimming, Miller experimented in R&B and funk and explored love, depression and candid honesty when it came to his own battles.

Tonight, a public vigil organized by Pittsburgh label Nightfall Records will be held at the city's Blue Slide Playground inside Frick Park, a frequent childhood hangout spot of Miller's that inspired the title and content of his debut album, 2011's Blue Slide Park. Miller's music will be played chronologically, interspersed with tributes from those whose lives he affected. Nightfall Records is inviting visual artists "to come and paint, create [and] draw live tribute art," and The Pittsburgh Post-Gazette reports that the playground's namesake slide has gotten a fresh coat of blue paint for the occasion.

The conversation below is a reflection on Miller's legacy from two NPR Music staffers: Sidney Madden, who covers hip-hop for the site, and Bobby Carter, who produced Miller's August Tiny Desk Concert, which would turn out to be one of the artist's final performances.

Bobby Carter: Mac and his team had just hopped off of a coast-to-coast flight, but were really eager to see the desk and to play. I've produced plenty of acts at the Tiny Desk where the artist wants to get into the green room, relax, or get into a zone right up until performance time. I understand and respect that approach, but Mac Miller was the polar opposite. They all arrived as a unit and exited their Sprinter giggling like high schoolers. Thundercat, who joined him on bass, had performed solo at the Desk just a few months prior, so he was able to brief Mac on what was to come and totally break the ice. I showed them to the green room, where he met the four string players for the first time, greeting them graciously. I carved out some extra space for Mac to get situated, but he wasn't interested. He wanted to get to the desk, and that's where they stayed. He told me that he was a little nervous — this was the first time they would perform these songs live. 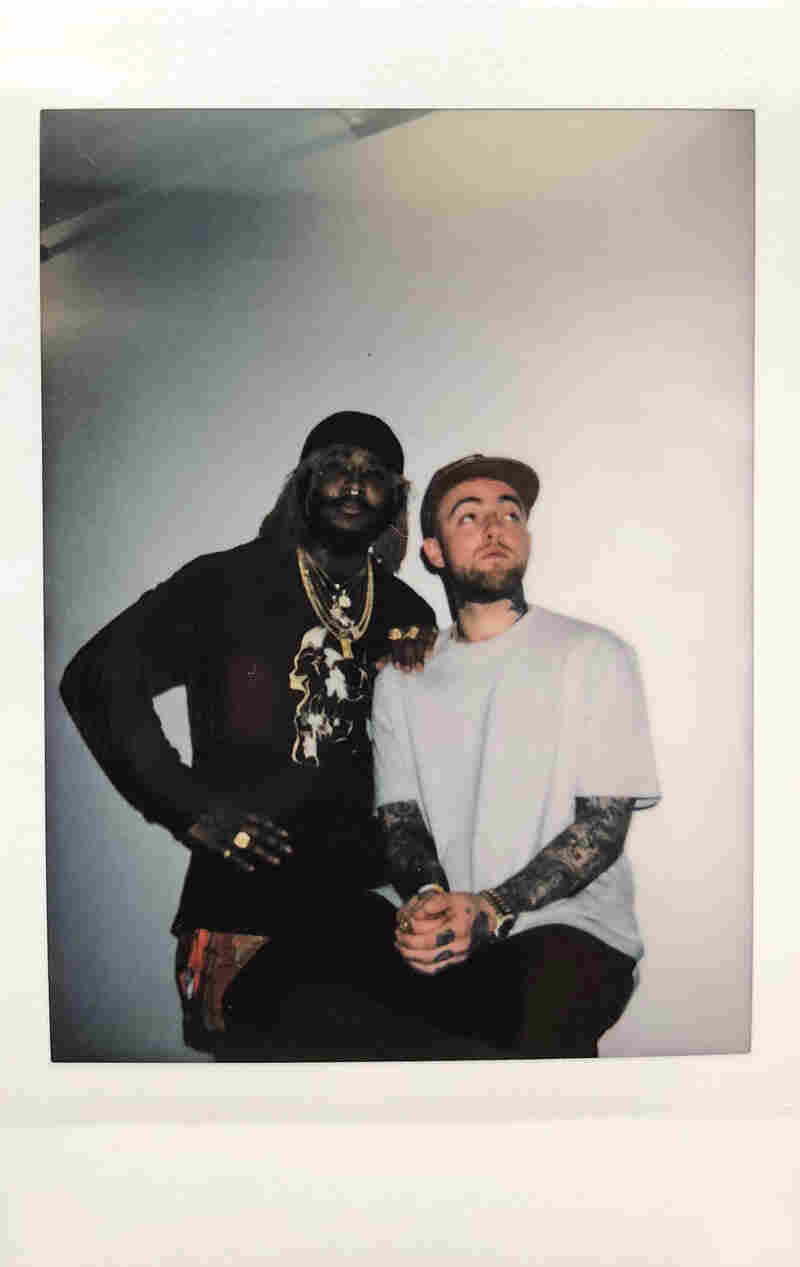 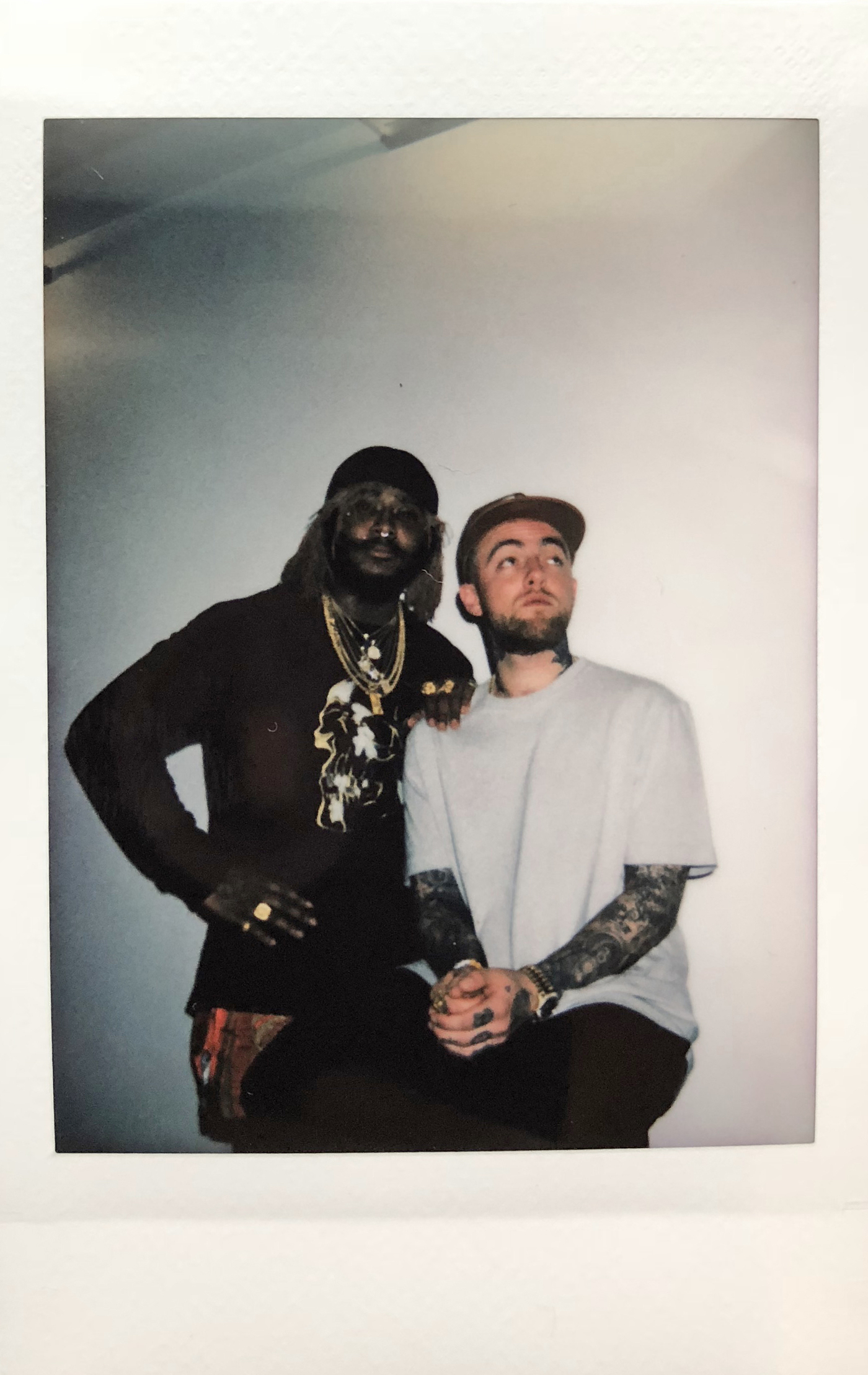 Thundercat and Mac Miller after their Tiny Desk Concert performance.

There was a very endearing dynamic between Mac and Thundercat on- and off-camera; they were constantly trying to one-up each other with the jokes. We literally had to hit 'pause' on the antics in order to get the instrumentation situated. Placing Thundercat on the shaker for the first song was a game-time decision that came from one of those jokes — if you look closely at the piano player, Javad Day and Mac during "Small Worlds," you'll catch them snickering as Thundercat opens up on that shaker!

Sidney Madden: I think the fact that he was so ready to get into the space and start rehearsing with the string players shows his commitment to his musicality and respect for live instrumentation — aside from his raps, that's always something that piqued my interest when I'd give any of his new records a first spin. I remember feeling so immersed in the horns and the layering of piano on Watching Movies with the Sound Off and The Divine Feminine. He was always someone I could count on for a different sound with each new record.

He always delivered dependably aching and honest albums — almost as if you could feel his eyes growing red from late studio sessions over the burden and, as far as sales, we kind of took that for granted. His debut album, Blue Slide Park, released independently under Rostrum Records, debuted at No. 1 on the Billboard 200, but after that, he had a period where it seemed his releases were always overshadowed by others, mostly because of release scheduling. 2013's Watching Movies with the Sound Off, after months of promo, got bumped to the No. 3 spot after its release because of Kanye West's Yeezus and J. Cole's Born Sinner. 2015's GO:OD AM suffered a similar fate, being bumped from No. 1 on release week in large part because of Drake and Future's surprise collab tape What A Time To Be Alive (which, let's face it, definitely hasn't aged as well as Mac's third studio album). In 2016, Mac was outdone by Drizzy again when his fourth studio album, The Divine Feminine, was bested by Views, which at that point had already been out for five months but jumped back to the No. 1 spot. His recently-released fifth album, Swimming, debuted at No. 3, falling behind Travis Scott, who dropped his third studio album Astroworld the same day — and Drake again, whose fifth album Scorpion has been in the Top 10 since being released in June.

Bobby, you were saying earlier how you think Swimming showcased his musicality hit a new peak?

Carter: I think so. He's always had unconventional musical ideas. Watching Movies had this wild psychedelic sound which was different but, at times, was all over the place. Divine Feminine had a much softer tone and was heavily driven by live instruments, but touched on one thing, love, throughout. Swimming reeled all that stuff in and was much more fluid than any other project in my opinion. Swimming just sounded free. We originally talked about a Tiny Desk performance during The Divine Feminine, but it never worked out until this album.

Madden: One of the reasons this death stands out to me so much is — though hip-hop has had a few unexpected deaths within the last year — he was someone you thought was in the clear, to a certain extent; he wasn't someone on the cusp of mainstream fame and he wasn't an OG on the other side of the hill.

Mac Miller On Microphone Check: 'It's OK To Feel Yourself'

He was right in the middle of all of it — in the middle of his development as a musician, which is evident on his latest albums, but he was also in the middle of the spotlight, of the same class and caliber of MCs that are now some of the biggest names in rap. He came up in hip-hop's blog era, the same time J. Cole was dropping Friday Night Lights and Kendrick Lamar was dropping Overly Dedicated. Mac was in the 2011 XXL Freshman Class alongside Kendrick, Meek Mill, YG and Big K.R.I.T. — and at the time, he was one of the stars of that cover, because of the Internet fame surrounding his YouTube hits like "Donald Trump" and "Best Day Ever."

And though he often got boxed into the short-lived subgenre of snarky frat rap, he didn't rest on his laurels. He honed his craft, on the mic and on the production side, which is why he earned the respect of so many in and outside of the hip-hop world. 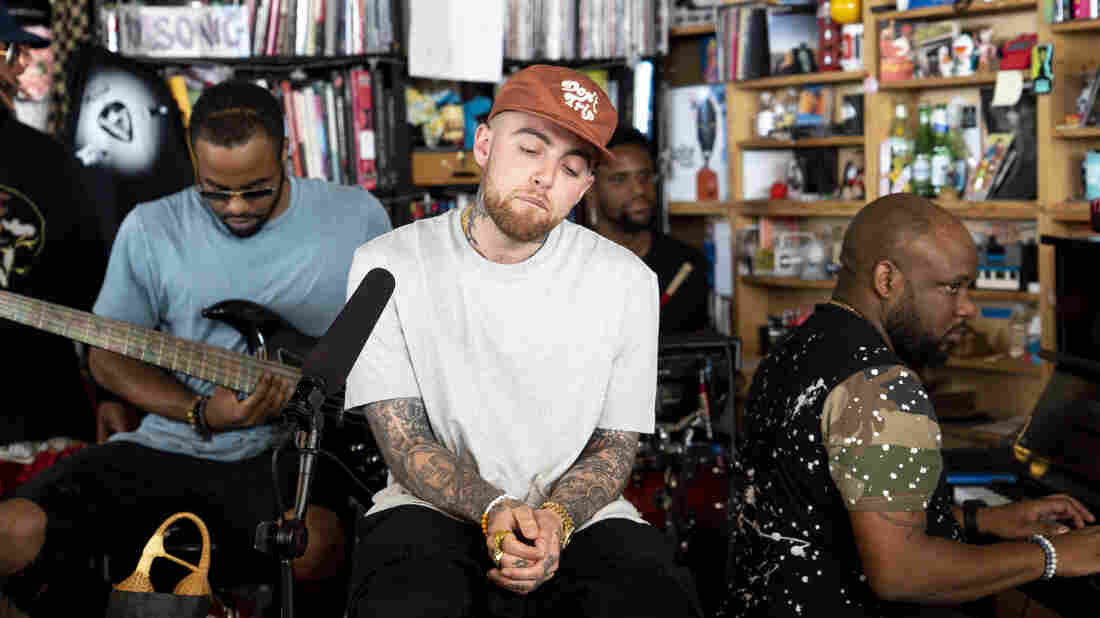 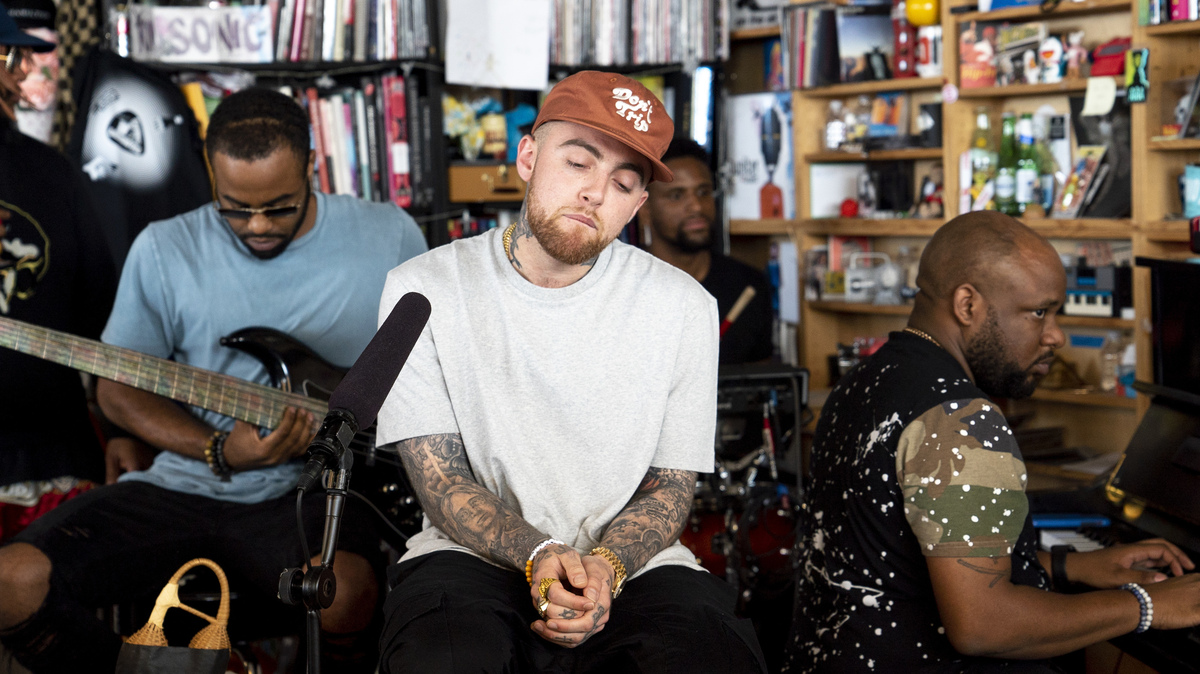 Carter: One of the hardest things to do in art, and maybe particularly in hip-hop, is to achieve huge success out the blocks and maintain it — there's usually a big dip in momentum at some point. If you get so big so fast, it can be hard to maintain that. The expectations can be hard to live up to. I don't think Mac worried about that. He never followed and he always did what he wanted to do musically, not what was in fashion. I think Mac Miller's strength was to carve out his lane and grow up with his fans. There's a true love between Mac and his fans and peers and we've seen that immediately following the tragic news.

Madden: And because he was in the middle, but was always so accessible and down to work with seemingly anyone, influencing a lot of the rappers we now consider the younger generation.

Carter: The doors he's opened for this younger generation can't be overstated. Mac put Chance The Rapper on his second tour ever; he took Rapsody and The Internet out, and on and on. Other than the music, i think that's the legacy he leaves behind. He always reached back to pull others up. Even up until his most recent tour, he was going to bring J.I.D on tour, who is just starting to gain notoriety.

Madden: The aspect of discovery was always something you would come to expect from a Mac Miller performance. Whether it was being put on to a new young act because he took them on tour as an opener or because of Mac himself re-energizing the audience with a guitar or drum solo in the middle of an interlude. The potential for surprises at his shows was unlimited.

Carter: I'm discovering more after his passing. I've already found him playing guitar and singing Oasis' "Wonderwall" during one of his shows. There's a video of him playing Stevie Wonder's "Isn't She Lovely" on piano.

He left plenty of proof of his musical brilliance, but there's going to be lots more talk about how nice Mac Miller was as a person. We tend to highlight the great qualities once we lose someone, but I can say for certain that there's no embellishment when we speak about Mac Miller. We saw that up close. It's hard to lose that light when we so desperately need more of it. He was the real deal.