Accessibility links
Hurricane Florence: Carolinas And Virginia Issue Evacuation Orders The Category 4 storm is expected to hit the Carolinas and Virginia late Thursday or early Friday. All along the coast, people are being urged — or ordered — to get out, and get out early. 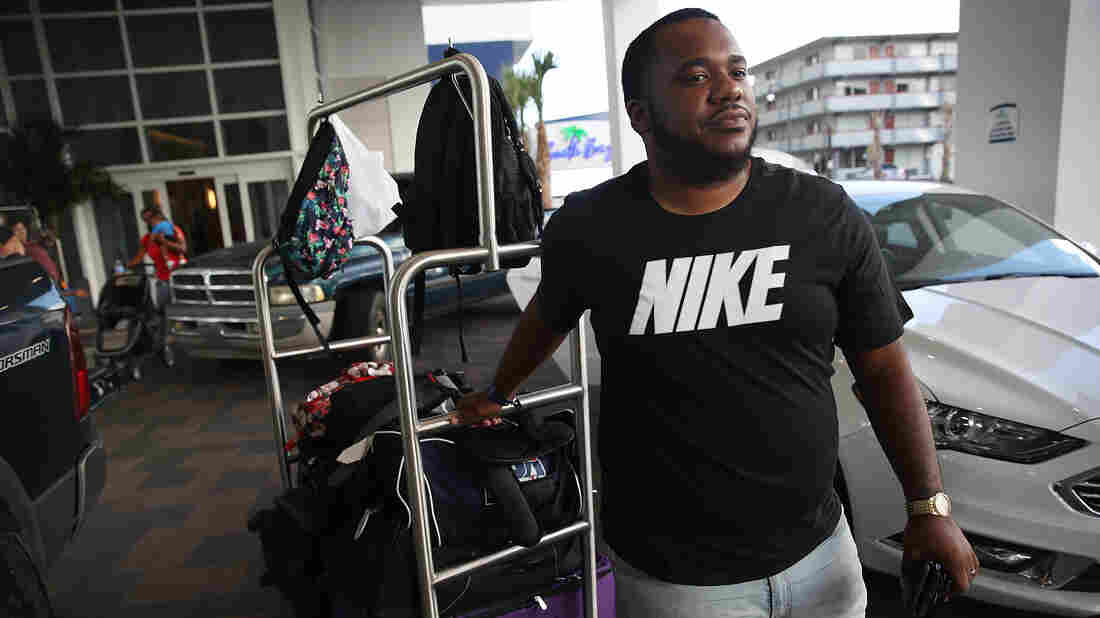 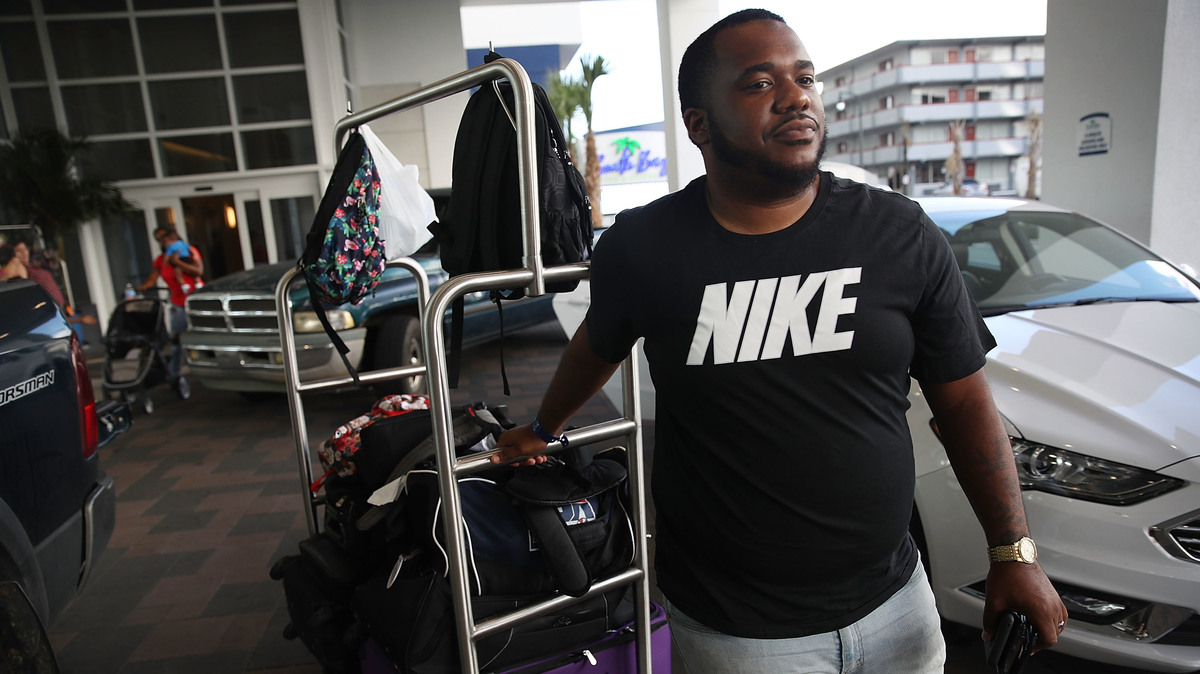 Marcus Thurston and his family leave their hotel in Myrtle Beach, S.C., on Tuesday, cutting their vacation short ahead of Hurricane Florence's arrival.

In Charleston, S.C., a major interstate is reversing direction for about 100 miles, sending every lane inland — even earlier than originally scheduled.

In the Outer Banks, N.C., where tourists and residents rely on a few bridges and ferries for access to the mainland, authorities are warning residents to get out immediately. The state's governor has taken the unprecedented step of issuing a state-level, mandatory evacuation order, instead of relying on local governments.

And in coastal Virginia, while the sun was shining and the sky was blue, the state's emergency management website crashed as hundreds of thousands of people tried to look up mandatory-evacuation maps.

Wide swaths of North Carolina, South Carolina and Virginia are preparing for the arrival of Hurricane Florence — currently a Category 4 storm with 140 mph maximum sustained winds that will also bring dangerous flooding and storm surges.

Florence is expected to hit those three states late Thursday or early Friday. Evacuation orders are going into effect for nearly the entire coasts of North and South Carolina on Tuesday, adding to orders that went out on Monday.

All told, more than 1 million people are under mandatory-evacuation orders, according to the Federal Emergency Management Agency. Many more are being urged to evacuate at-risk areas voluntarily.

"This is not a storm that you need to try to ride out," North Carolina Gov. Roy Cooper said at a news conference Tuesday. "It's historic and maybe once in a lifetime.

"I know that North Carolinians are a hardy bunch and we've seen nor'easters and hurricanes before, but this one is different," he said. "And we want to make sure that people know that, because they're risking their lives when they stay."

Florence is expected to be a large, slow storm dropping massive quantities of rain on already-waterlogged land, with consequences extending well beyond the coast. Far inland — where evacuees will be taking refuge — flooding and power loss are still a serious risk.

Michael Sprayberry, the director of North Carolina Emergency Management, said that all shelters for coastal evacuees are located above the floodplain. He acknowledges that inland residents may be heading to shelters as well, to flee river flooding.

"We can also surge to the west to find other shelter as needed," he said Tuesday.

FEMA recommends that anyone fleeing a hurricane take an emergency supply kit — including several days' worth of water, food and any necessary medical supplies, as well as flashlights, extra batteries, a first-aid kit and baby wipes for personal hygiene.

FEMA also recommends filling up on gas ahead of time. Patrick DeHaan, an analyst for GasBuddy, tells NPR that currently, a small number of gas stations are reporting that they have run out of fuel.

DeHaan does not expect fuel supply to become as urgent a problem with Florence as it was with hurricanes Harvey and Irma, because refineries are not in the path of the storm. But lines are starting to form at gas stations, and shortages are increasing — particularly in Wilmington, N.C.

"It's really now becoming a crunch against time to fill up ahead of the storm," he says.

Evacuees should take their pets with them, along with pet food and supplies; they may not be allowed in all shelters, so be prepared to find pet-friendly hotels, kennels or family and friends to take them in. The Charlotte Observer has compiled some options in the Carolinas.

Nursing homes often face a dilemma as storms approach, as Tom Akins, the CEO of Leading Age in North Carolina, which works with retirement communities, tells NPR's All Things Considered.

Evacuations carry serious health risks for residents, but sometimes, the hazard of staying in place is just too great, Akins says.

"If you think about a person who is in a nursing facility, and who has lost lots of independence and lots of ability, and you magnify the angst that you or I would feel if we are in this situation by a thousand times — it probably doesn't approach how they feel about what's about to happen," he says.

Evacuating a disaster area is particularly difficult for the elderly, people with disabilities and people living in poverty.

Virginia Gov. Ralph Northam says local resources are available to help people who might have difficulty leaving their homes. When traveling is difficult, he says, it's even more important evacuate in advance. "We want to make sure that they have plenty of time to get to higher ground," he told NPR on Tuesday.

However, the AP reports that some shelters in Virginia won't be opening until Wednesday or Thursday. 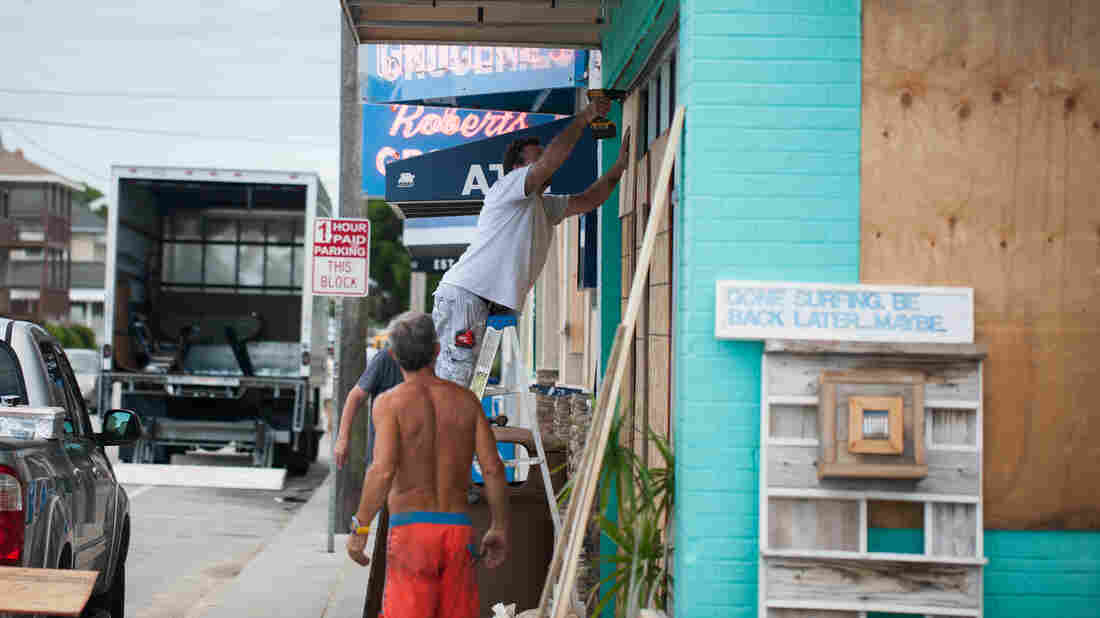 People at Wrightsville Beach in North Carolina hurry to board up Tuesday in anticipation of Hurricane Florence. More than 1 million people are under evacuation orders in the Eastern United States. Logan Cyrus/AFP/Getty Images hide caption 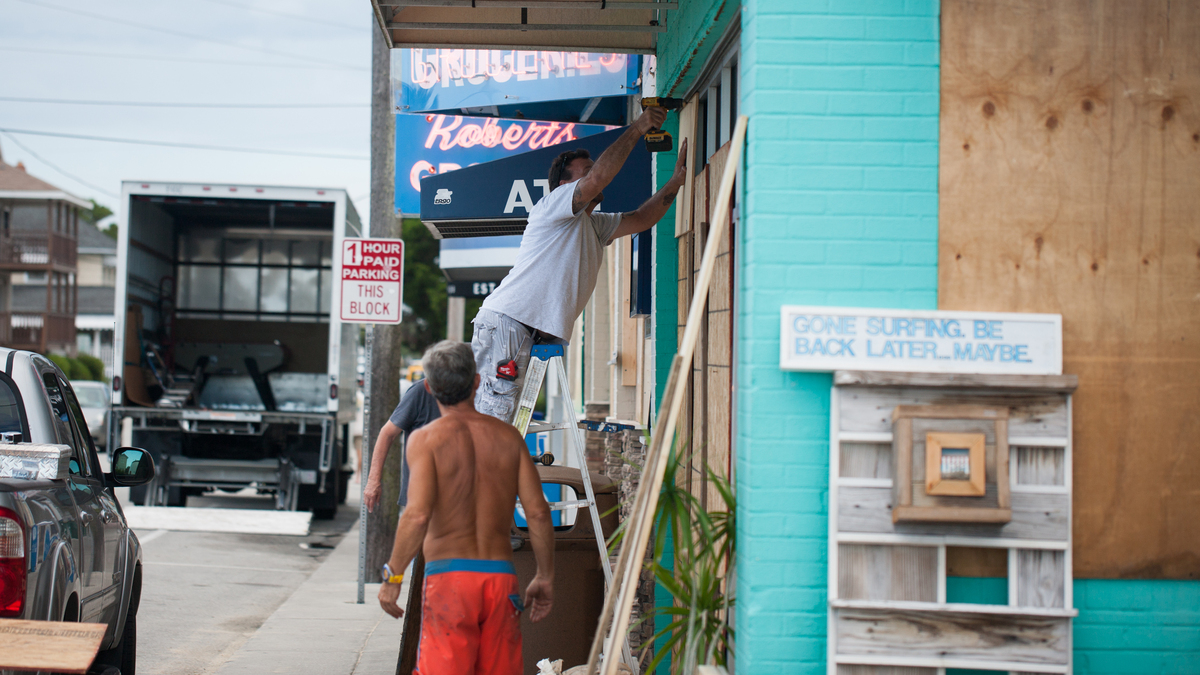 People at Wrightsville Beach in North Carolina hurry to board up Tuesday in anticipation of Hurricane Florence. More than 1 million people are under evacuation orders in the Eastern United States.

Anti-price-gouging laws are now in effect in North Carolina and South Carolina; anyone witnessing exorbitant prices on gas, lodging or food along evacuation routes can complain to the attorney general's office.

Hurricane Watch Issued For Carolinas Ahead Of Category 4 Florence

In addition to evacuations, more than half of schools in 26 South Carolina counties are closed on Tuesday, with no reopening date set.

"Some schools in the inland counties will be used as shelters," McMaster tweeted about that move. He added, "we want to keep the roads as clear as possible for the one million evacuees we are expecting."

Colleges and universities in the Carolinas have canceled classes, with some preparing to be shut well into next week, NPR's Elissa Nadworny reports.

"For UNC students with no other housing options, the branch in Asheville has set up cots to house displaced students," she says.

And it's not just people getting away from the coastline.

The Navy is relocating ships and aircraft from the vicinity of Norfolk, Va. Nearly 30 ships are being sent to other areas of the Atlantic Ocean, according to U.S. Fleet Forces Command, while helicopters and fighter jets are being relocated to inland bases.

And commercial airliners are sending 787s from Charleston, S.C., to Paine Field in Washington state — the airport that serves a Boeing manufacturing plant — for safekeeping, according to Flightradar24 and a Seattle aviation reporter.

In addition to those local evacuation orders, Cooper ordered state-level mandatory evacuations for North Carolina's barrier islands. "The state, to our knowledge, has never issued an evacuation order," Cooper said Tuesday. "This is the first of its kind."

"Don't bet your life on riding out a monster," he said. "If you wait until conditions get bad, it may be too late to get out safely, and you also put first responders at risk."

The Outer Banks, a chain of barrier islands that are a popular tourist destination, are connected to the North Carolina mainland by just two bridges.

ABC's Gio Benitez, reporting from the Outer Banks, says authorities are urging people to leave well ahead of the storm to avoid being stranded on those bridges.

Farther south, in the coastal city of Wilmington, even bars that have never shut for a storm before are taking Florence seriously, the Wilmington Star News reports. The newspaper called the tone "more cautious than celebratory," with owners eyeing closures rather than prepping hurricane parties. 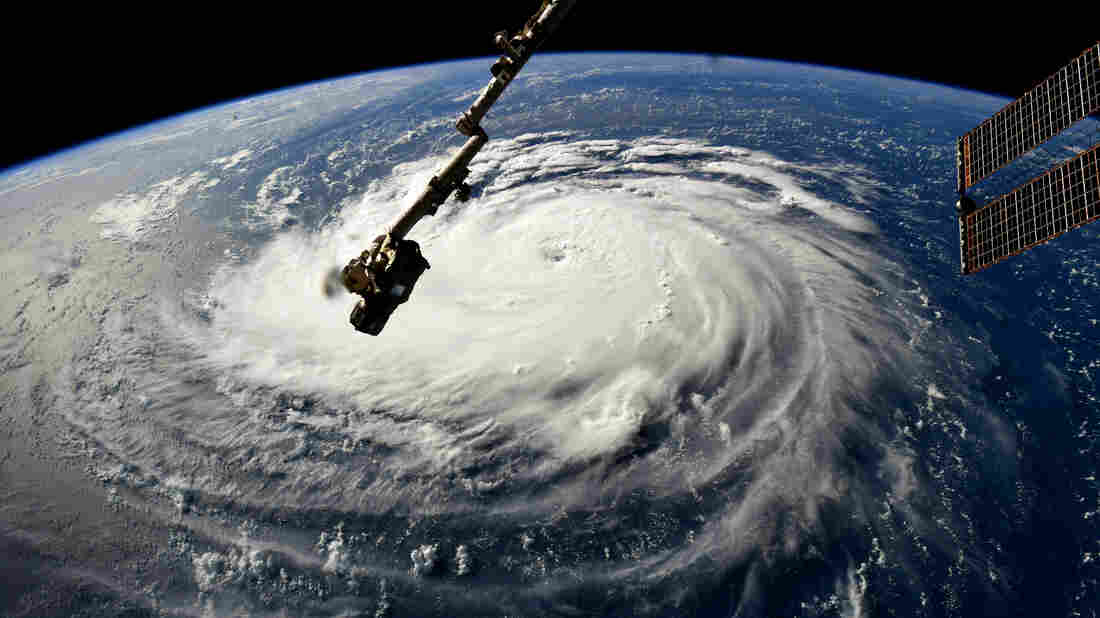 Hurricane Florence, as seen from the International Space Station on Monday, gains strength in the Atlantic Ocean as it moves west. NASA/Getty Images hide caption 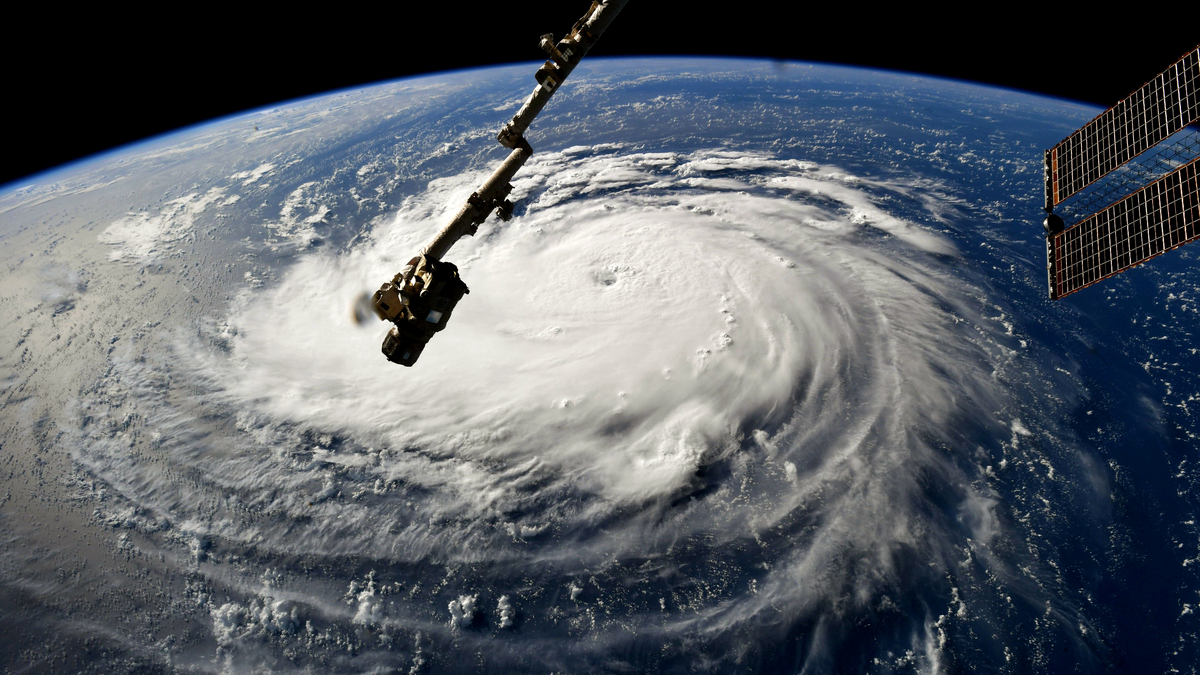 Hurricane Florence, as seen from the International Space Station on Monday, gains strength in the Atlantic Ocean as it moves west.

McMaster initially ordered a full coastal evacuation effective at noon on Tuesday, issuing a a mandatory order for residents in hurricane evacuation zones along the state's entire coast.

On Tuesday morning, he adjusted that order based on new predictions from the National Hurricane Center. The southernmost parts of South Carolina — Beaufort, Colleton and Jasper counties — are no longer under a mandatory-evacuation order. (Edisto Beach, however, is still being evacuated.)

To help facilitate the exodus of hundreds of thousands of people in South Carolina, lanes are being reversed on Interstate 26 to allow people to head only west — away from the coast and the massive storm. All four lanes of the interstate are being used for inland-bound traffic for some 100 miles, from Charleston to Columbia.

SCHP troopers bring the first cars from the reversed lanes back into Columbia at the crossover on I-26 and I-77 in Columbia around 1 p.m. on September 11. I-26 Lane reversal from Charleston to Columbia is in full effect. #Florence #Tweets pic.twitter.com/ASINAYdCEi

The lane reversal was scheduled to begin at noon ET, and before 9 a.m., troopers were already starting to clear out the lanes of eastbound traffic to prepare for the evacuation.

The reversal began an hour ahead of schedule, at 11 a.m.

Not everyone is heading out of town, despite the urgings of officials. In Charleston, famous for its food scene, some restaurants and bars are staying open — even offering half-off oyster specials, as The Post and Courier reports.

"We will be a safe house for those in need. Of a drink," one bar told its fans.

MacDougall Correctional Institution is in the mandatory-evacuation zone and a spokesman says officials are monitoring the situation to determine whether to evacuate the prison. Interim Communications Director Dexter Lee notes that the facility suffered no structural damage during Hurricane Hugo in 1989 and that inmate movements are not announced in advance for security reasons.

The National Weather Service in Charleston provided an update on Tuesday urging residents to take the risk seriously, emphasizing that Florence could have widespread effects and it is difficult, at this stage, to predict the exact impact.

"We're certainly hoping for the best, but we want you to prepare for the worst," Bright said. "We need you to be prepared for potentially extreme impacts."

In Virginia, Northam issued a mandatory-evacuation order for coastal residents in "Zone A" — an area that includes parts of Hampton Roads and the Eastern Shore. The order took effect at 8 a.m. ET Tuesday.

Residents of coastal Virginia can look up their evacuation zone here. The site crashed on Monday, overwhelmed by the number of visitors, The Virginian-Pilot reports. The department of emergency management had to put the site on a new set of servers to handle the demand.

The Associated Press, citing Virginia Department of Emergency Management spokesman Jeff Caldwell, reports that local governments are responsible for opening shelters and some will not be ready until Wednesday or Thursday.

Local news outlets mention several Virginia shelters that are not opening until later this week.

That means some would-be evacuees may have to wait several days before they have a free place to go.

"Caldwell said the state is considering opening its own shelters later this week if the local shelters fill to capacity," the AP reports.

NPR's Sarah McCammon, whose neighborhood in Virginia Beach is under an evacuation order, reports that as of Tuesday morning, the area was "pretty quiet."

"It really, so far, feels like any normal day," she says. "A lot of people are still around."

But people are clearly preparing for the storm, she said — local stores are already selling out of large bottles of water.