Accessibility links
'The Real Lolita' Investigates The True Crime Story Of Sally Horner Written in light of Nabokov's famous novel, the book stands out for its captivating mix of tenacious reporting, astute literary analysis and passionate posthumous recognition of a defenseless child. 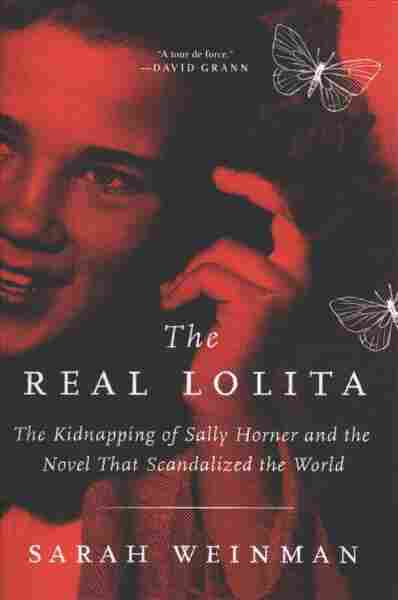 Sarah Weinman, an editor and writer of true crime stories, doubles up on her literary sleuthing in The Real Lolita, investigating the 1948 kidnapping and rape of 11-year-old Sally Horner by a convicted pedophile.

She does it not just for its own inherent interest but in order to build a convincing case that that crime served as an inspiration for Vladimir Nabokov's most famous novel, Lolita — a claim that he denied. Her book makes for riveting reading, despite a disconcerting tendency to fill in blanks with conjectures (about young Sally's thoughts, for example) and to overplay cliffhangers at the end of each chapter.

Weinman is a thorough reporter who is most compelling when she tells it straight: Sally Horner, a fifth-grade honor student, stole a 5-cent notebook in her local Camden, N.J., Woolworths on a dare by a clique of girls she hoped to join. As she was leaving the store, a "hawk-faced man" in a fedora grabbed her arm, told her he was an FBI agent and threatened her with reform school. Months later, in June 1948, the man, whose current alias was Frank La Salle, intercepted Sally on her walk home from school and convinced her that the government insisted she go with him to Atlantic City. He instructed Sally to tell her mother that he was the father of two school friends who had invited her on vacation. Scared, Sally lied to her mother, who gave her the OK. The next time Sally saw her family was 21 months later, in March 1950, shortly before her 13th birthday.

Weinman interweaves the story of Sally's abduction and eventual rescue with Nabokov's writing of Lolita, which he had begun well before Sally's kidnapping and which had stymied him for years. She smartly discusses how the novel's preoccupation with pedophilia and prepubescent girls was presaged in some of Nabokov's earlier work — including Laughter in the Dark, The Gift, and his shockingly graphic 1928 poem, "Lilith," about an older man's intercourse with an "enticing ... unforgotten child." After two attempts to burn the manuscript (intercepted by his wife Véra), Nabokov finished Lolita in 1953, three years after Sally's liberation and a year after her death, at 15, in a car accident. It was first published abroad in 1955, and then in the United States in 1958 — when it became an immediate, incendiary commercial success.

Nabokov always denied that Sally's story influenced his novel, which he insisted was all art. "To admit he pilfered from a true story would be, in Nabokov's mind, to take away from the power of his narrative," Weinman writes. She argues that recognizing the connection doesn't diminish his remarkable achievement, "but it does augment the horror he also captured in the novel." Loaded words like "pilfered" and "strip-mined" clearly convey Weinman's attitude. In fact, Nabokov comes across in her book as an insufferable — if brilliantly inventive — snob, aesthete and egotist.

Weinman approaches her subject as if she were conducting a political inquiry: "My central quest with respect to Nabokov was to figure out what he knew about Sally and when he knew it," she writes. To this aim, she parses notecards on which Nabokov transcribed news of Sally's death in 1952 and Humbert Humbert's parenthetical remark about her in the novel: "Had I done to Dolly, perhaps, what Frank La Salle, a 50-year-old mechanic, had done to 11-year-old Sally Horner in 1948?" But she admits repeatedly that her argument relies heavily on circumstantial evidence and indirect proof.

Weinman is also on a mission to correct Lolita's millions of mis-readers, who bought Humbert's suave, wily contention that 12-year-old Dolores Haze was a seductive nymphet — and missed the horror of her nearly two-year ordeal. "Those who love language and literature are rewarded richly but also duped," she writes. "Lolita's trickery and mastery of obfuscation ... continue to make moral mincemeat out of the novel's wider readership."

So, too, does society's tendency to blame rape victims. Weinman reports that Sally suffered taunts and stigma after returning home and flags her mother's tone-deaf statement: "Whatever she has done, I can forgive her." Weinman appreciatively cites Véra Nabokov's diary entry expressing the wish that "somebody would notice the tender description of the child's helplessness ... and her heartrending courage."

The Real Lolita started as a long magazine article; in expanding her story, Weinman has tried to cover every angle and tie up every loose end, down to the fate of the young man at the wheel when Sally died. She includes several tangential murder cases that feel unnecessary, but she also unearths plenty of fascinating, often unexpected material, like the fact that the neighbor in the San Jose trailer park who helped rescue Sally ignored her own children's complaints of abuse by the many men in her life.

Weinman's diligence extends to an overview of Lolita's long tail, which has included some pretty dreadful film and stage adaptations. The novel also became fodder for comedians, including Groucho Marx, who memorably quipped, "I'll put off reading Lolita for six more years until she turns 18."

Weinman's article has already spawned a novel, T. Greenwood's Rust and Stardust, which also features a red and black cover. But The Real Lolita stands out for its captivating mix of tenacious investigative reporting, well-chosen photographs, astute literary analysis and passionate posthumous recognition of a defenseless child who — until now — never received the literary acknowledgment she deserved.