Accessibility links
Pope To Meet With U.S. Church Leaders Over Clergy Sex Abuse The head of the U.S. Conference of Catholic Bishops, Cardinal Daniel DiNardo, will meet in Rome with Pope Francis and other church leaders to discuss further investigations into abuse. 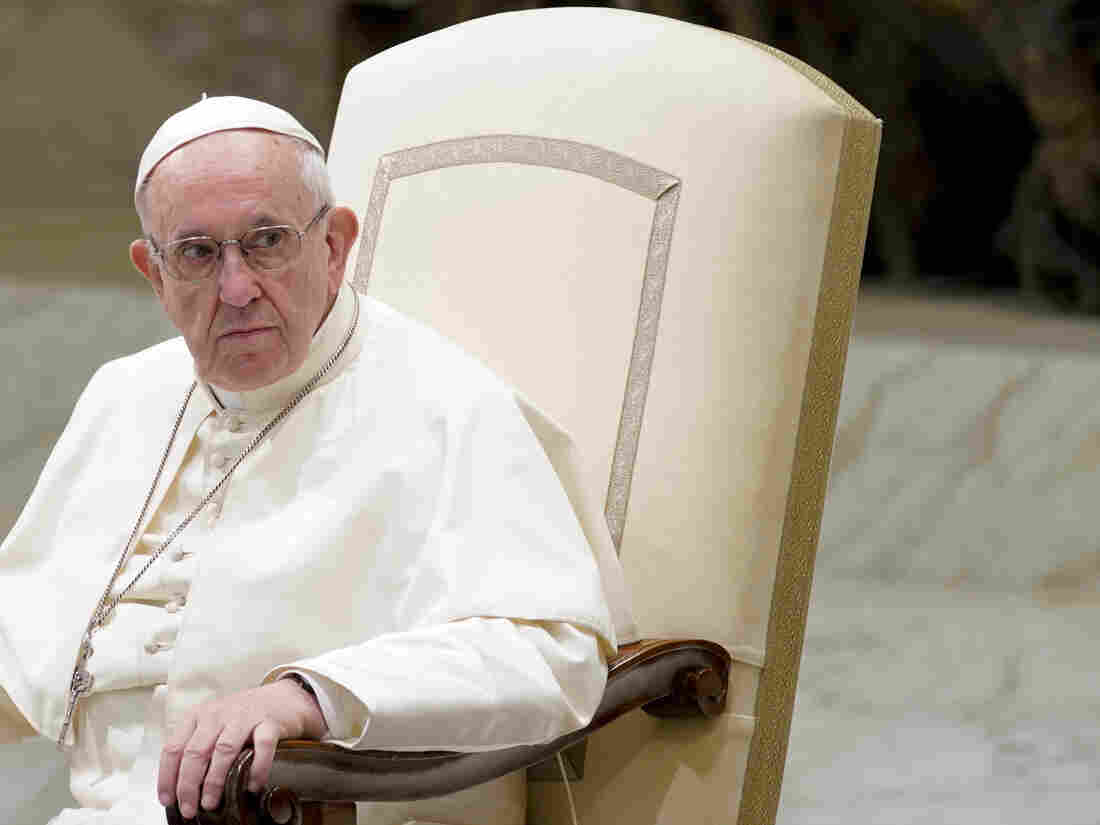 Pope Francis will meet at the Vatican with leaders of the U.S. Catholic Church, including the president of the U.S. Conference of Catholic Bishops, Cardinal Daniel DiNardo, to discuss clergy sexual abuse. Andrew Medichini/AP hide caption 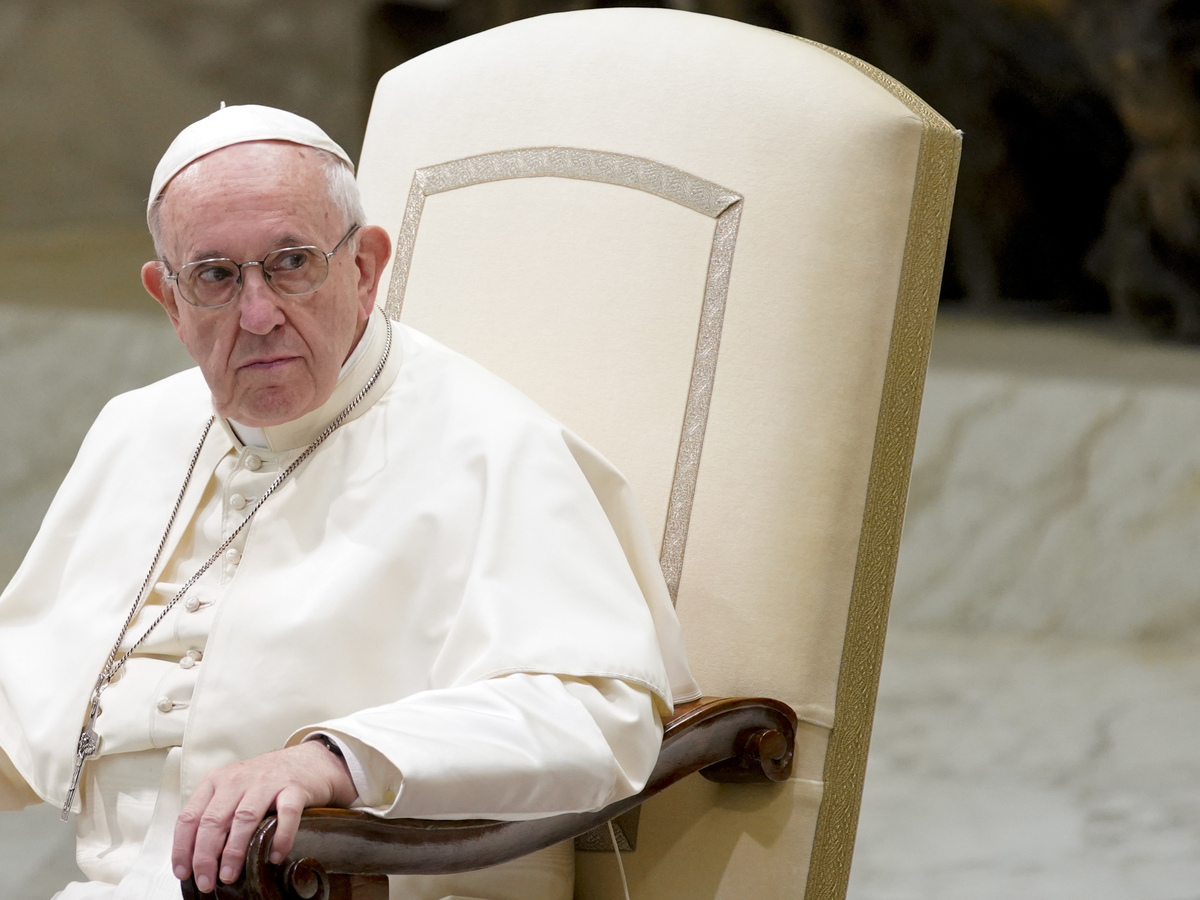 Pope Francis will meet at the Vatican with leaders of the U.S. Catholic Church, including the president of the U.S. Conference of Catholic Bishops, Cardinal Daniel DiNardo, to discuss clergy sexual abuse.

After weeks of relative silence, Pope Francis has agreed to meet a delegation of U.S. bishops and cardinals to discuss the Vatican response to the clergy abuse crisis.

A Vatican spokesman says the meeting at the Apostolic Palace on Thursday will include Cardinal Daniel DiNardo of Galveston-Houston, who leads the U.S. Conference of Bishops, and Cardinal Sean O'Malley of Boston, who advises the pope on sex abuse issues. Archbishop Jose Gomez, vice president of the bishops' conference, and Monsignor Brian Bransfield, the conference secretary, will also attend, according to the Vatican.

Separately, Pope Francis is also expected to meet with Cardinal Donald Wuerl, the embattled Washington, D.C., archbishop accused of helping to cover up for abusive priests.

In a letter to his priests released on Tuesday, Wuerl said he recognized that "a new beginning" may be needed in his church, and he said he will travel to Rome "in the very near future" to discuss his possible resignation with Pope Francis.

The church's handling of clergy sex abuse is also due to be discussed at the meeting Thursday between the pope and U.S. bishops. Cardinal DiNardo asked for the meeting last month, saying he wanted the pope to support an investigation into the scandal around former Washington, D.C., Archbishop Theodore McCarrick, who resigned from the College of Cardinals in response to allegations that he once abused a teenage boy.

With Vatican In Turmoil Over Abuse Allegations, Questions Remain About What Pope Knew

One question is how early Pope Francis was advised of McCarrick's alleged misconduct and what, if anything, he did in response. The Vatican's former ambassador to the U.S., Archbishop Carlo Maria Vigano, released an explosive letter on August 26, accusing top Vatican and U.S. church leaders of covering up for McCarrick for many years.

In that letter, Vigano implicated Pope Francis in the McCarrick cover-up and called on him to resign the papacy. Francis has yet to respond to Vigano's accusations, but the pope's Council of Cardinals reported this week that the Vatican will soon provide some "clarifications" regarding recent events.

The pope accepted McCarrick's resignation in July and ordered him to remain in "prayer and penance" until the accusations against him could be examined in a canonical trial. The U.S. bishops who will meet with Francis on Thursday are expected to press the pope on how that trial would proceed.

A top Vatican official earlier this week acknowledged that some allegations against McCarrick were brought to the Vatican's attention as early as 2000.

Cardinal Wuerl has been under intense pressure to step down since last month, when a Pennsylvania grand jury reported several instances when he, as bishop of Pittsburgh, was told of credible abuse allegations against priests under his supervision but still gave the men new parish assignments.

In the letter sent Tuesday to priests in his archdiocese, Wuerl said it became clear "that some decision, sooner rather than later, on my part is an essential aspect so that this archdiocesan Church we all love can move forward."

As is customary for bishops who turn 75, Wuerl had already submitted a formal letter of resignation, but it is up to Pope Francis whether to accept it.

The release of the Pennsylvania grand jury report and the uproar over McCarrick's past conduct amount to the most serious crisis facing the Vatican in years. A top aide to Pope Benedict and Pope Francis on Tuesday said the scandal amounted to the church's "own 9/11" catastrophe.