Accessibility links
6-Figure Price Tag Expected For Rare Apple-1 Computer At Auction The very first Apple computer — an Apple-1 — was really only a circuit board. But for computer geeks and tech-lovers, that board could become a collectors item when it goes up for auction. 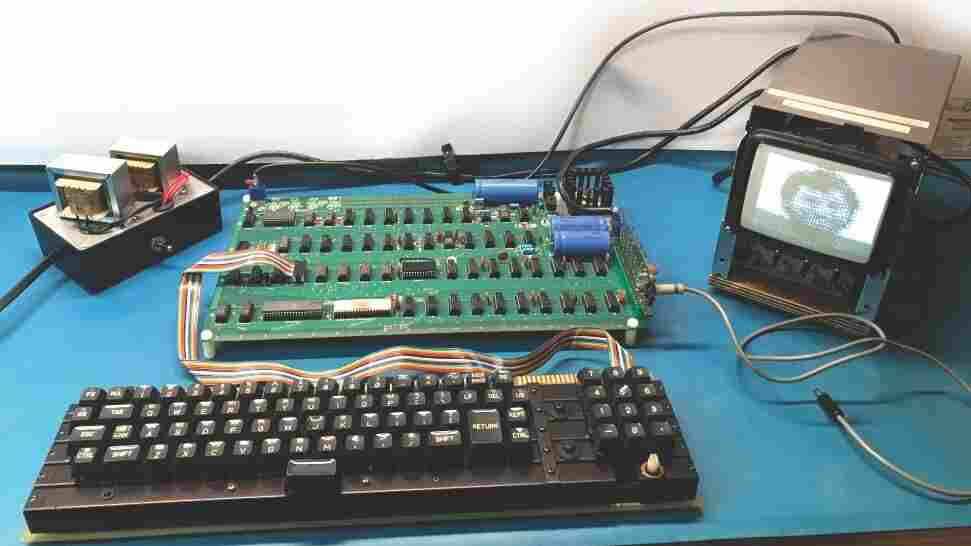 An Apple-1 circuit board is rigged up to a vintage keyboard and monitor. The board is one of only 200 manufactured in 1976. RR Auction hide caption 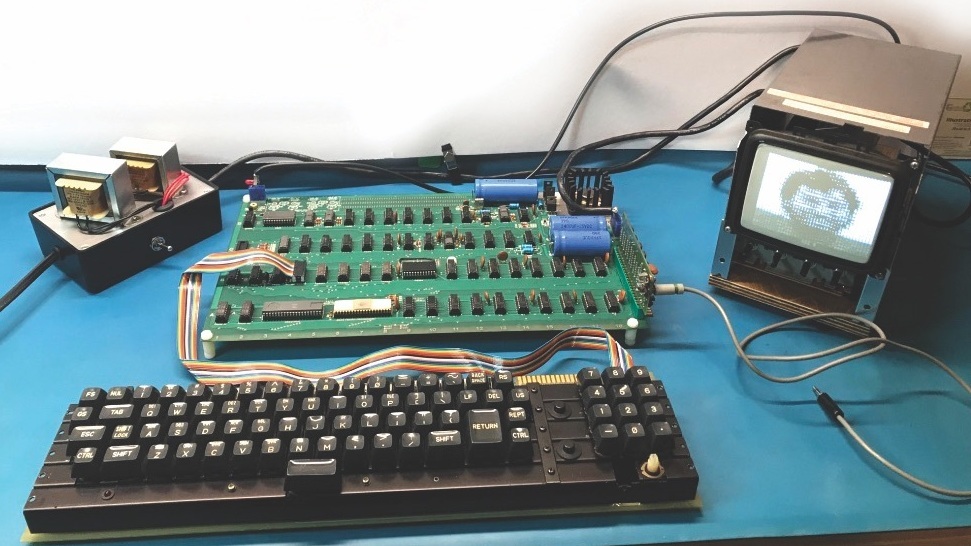 An Apple-1 circuit board is rigged up to a vintage keyboard and monitor. The board is one of only 200 manufactured in 1976.

Before Apple was a trillion-dollar company, before its phones and laptops came to dominate the tech industry, it was just a California startup working out of a garage. Now, one of the first products the company ever made — the Apple-1 computer — is about to be the star of a live auction on Sept. 25 in Boston.

"The Apple-1 is so iconic of that era, of the garage era of Silicon Valley, that I think there is almost no other object that really encapsulates what it does culturally and technologically," says Dag Spicer, senior curator for the Computer History Museum, which has an Apple-1 in its collection. Spicer says it's one of their most popular pieces.

Looking at an Apple-1 is kind of like looking at the Rosetta Stone. You don't totally understand what you're seeing, but you sense its significance.

In front of Cohen on a desk is an original Apple-1 circuit board, one of 200 built in 1976 and sold for $666.66. Home computers back then weren't for the masses. With this technology, coders could do very little.

"Write small programs, play a couple of video games that were text based, interactive fiction. And that's pretty much it," says Cohen.

This particular Apple-1 is unique, according to Cohen, because it hasn't been modified, and the unit still works. He has it rigged up to a vintage keyboard and small black-and-white monitor.

"So this is your boot-up screen. Not much to it, kind of flashing all the empty characters," he says, typing in a few commands.

"So, we will clear the screen, we'll reset. It's like watching grass grow." 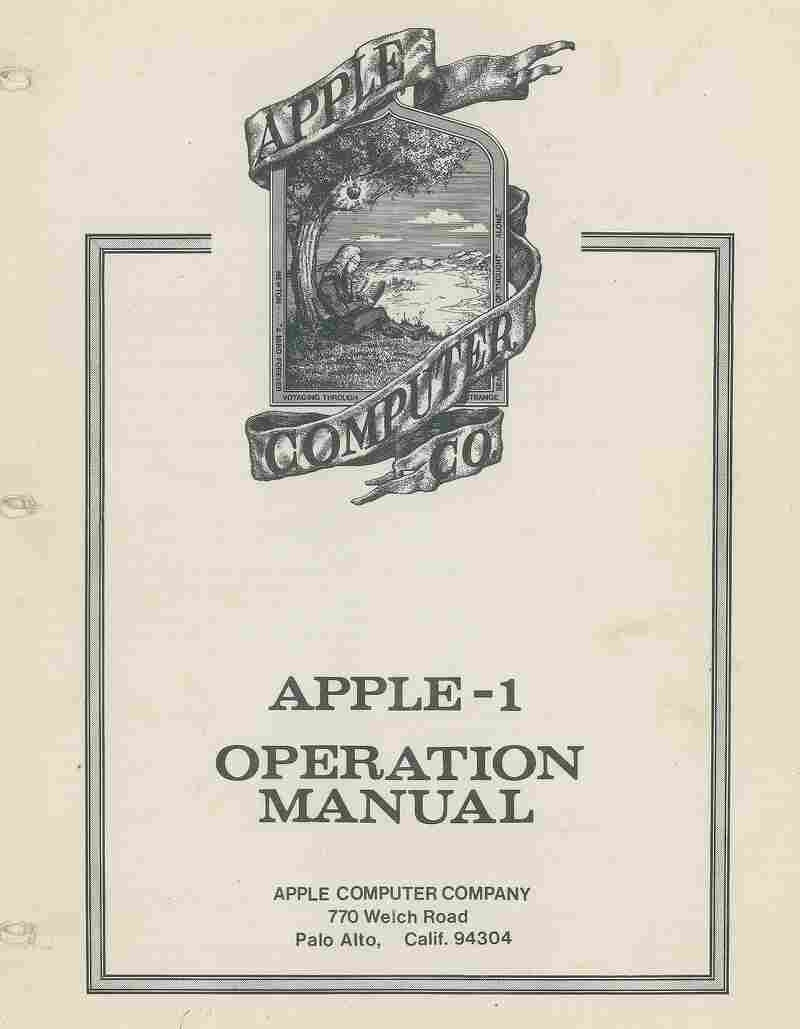 A vintage Apple-1 computer manual. The first Apple computer was really only a circuit board for coders to write programs and play a couple of video games. RR Auction hide caption 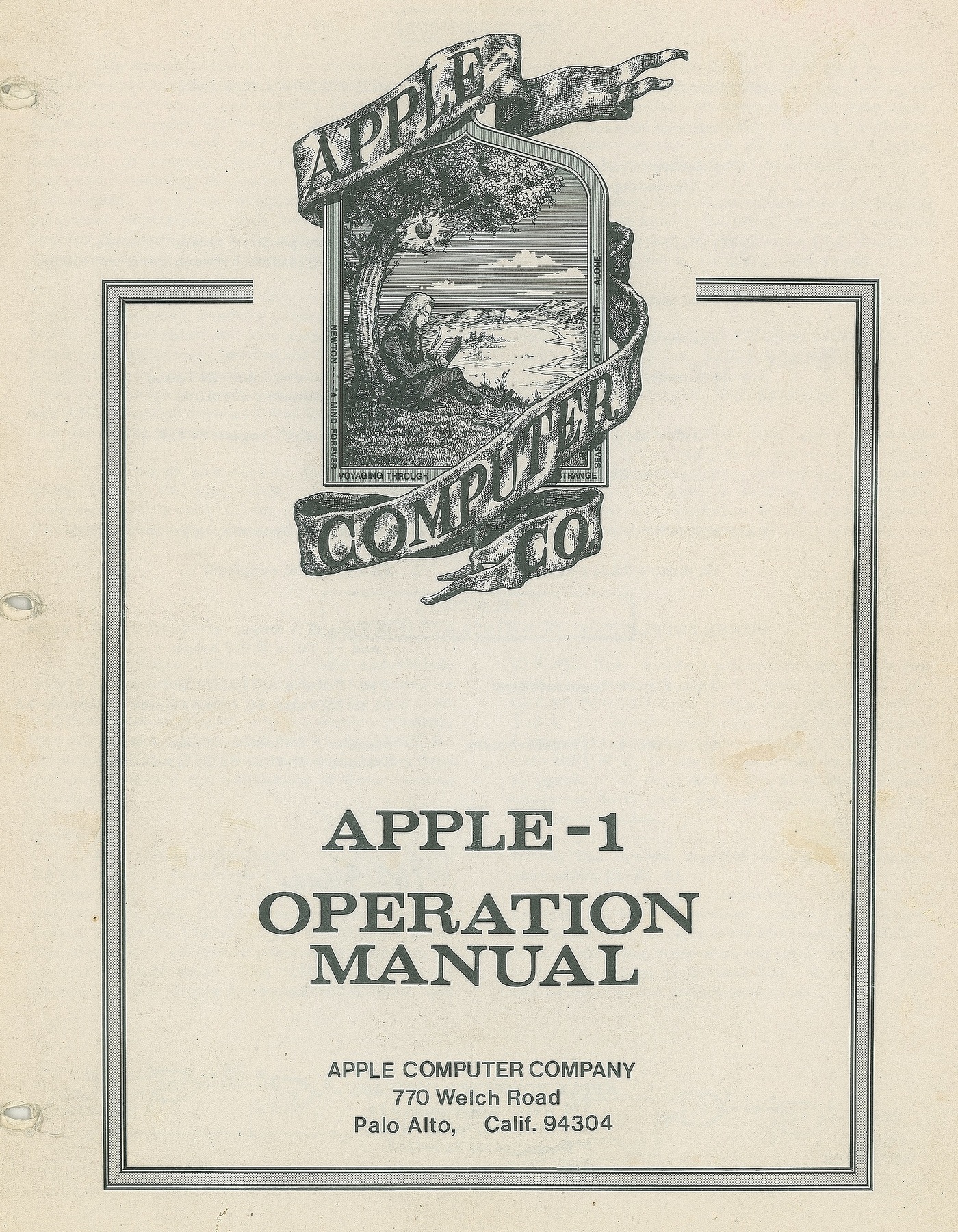 A vintage Apple-1 computer manual. The first Apple computer was really only a circuit board for coders to write programs and play a couple of video games.

"This particular board was purchased from the original owner for $300 in 1976," says Livingston. "I think the original guy only had it for about three months. He was a mainframe guy, he said he didn't want to mess with it, so he sold it to our client."

The seller is remaining anonymous, as he or she stands to make a lot of money off that purchase from 40 years ago. The estimated auction price tag is $300,000.

With that kind of cash, the winner is buying a piece of Apple history, and the Steve Wozniak legend.

"The summer that I built the Apple-1 computer, I was totally aware that a revolution was close to starting," Wozniak, who designed the Apple-1, told Bloomberg News in 2014.

"Steve Jobs came into town. He'd pop into town, see what I was up to, the latest thing I'd designed for fun, and then he'd somehow turn them into some money for both of us," he said.

Jobs and Wozniak would go on to make a lot of money, but not off the Apple-1. It was the Apple II, released a year later in 1977, that would forever change home computing.

Corey Cohen, the Apple-1 expert, says anyone willing to spend the kind of money expected in the auction is likely to keep the vintage computer behind glass.

"From a layout perspective, it is considered a piece of art," says Cohen. "Many people hang these on the wall."