Accessibility links
Federal Court Asked To Scrap Georgia's 27,000 Electronic Voting Machines Less than two months ahead of Election Day, a group of voters and election security advocates say the state's touchscreen voting machines are insecure and should be replaced with paper ballots. 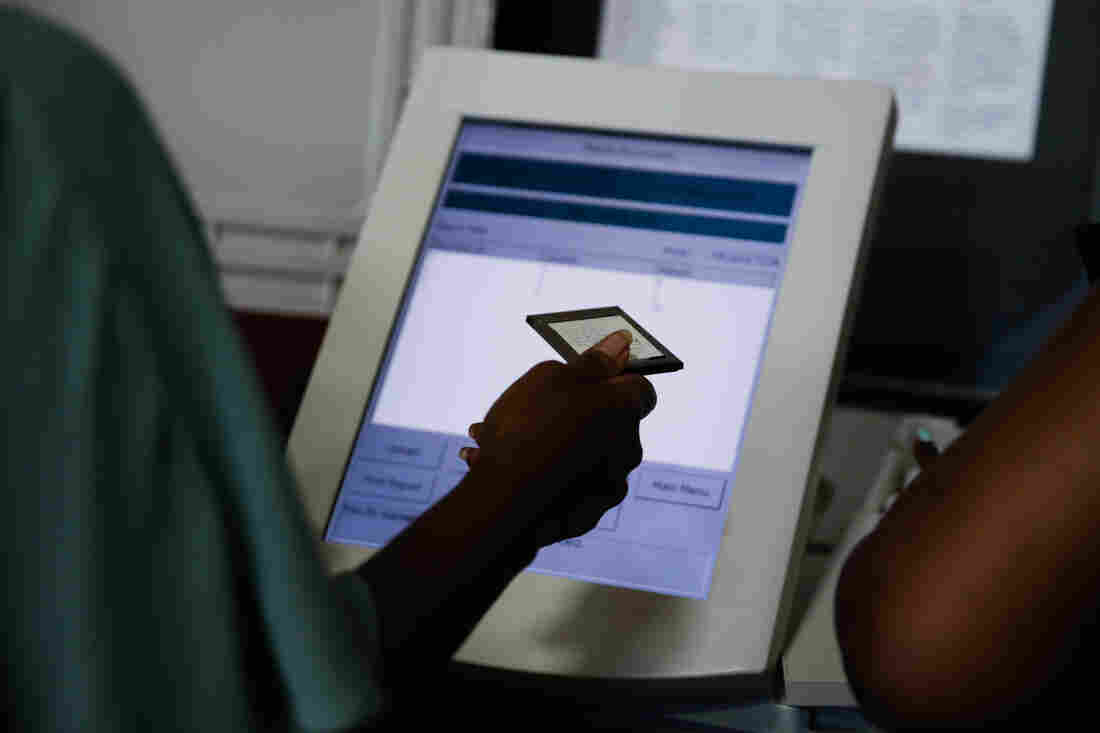 An election official holds an electronic voting machine memory card following the Georgia primary runoff elections at a polling location in Atlanta on July 24, 2018. A group of Georgia voters is suing the state, saying that the electronic machines are not secure. Bloomberg/Bloomberg via Getty Images hide caption 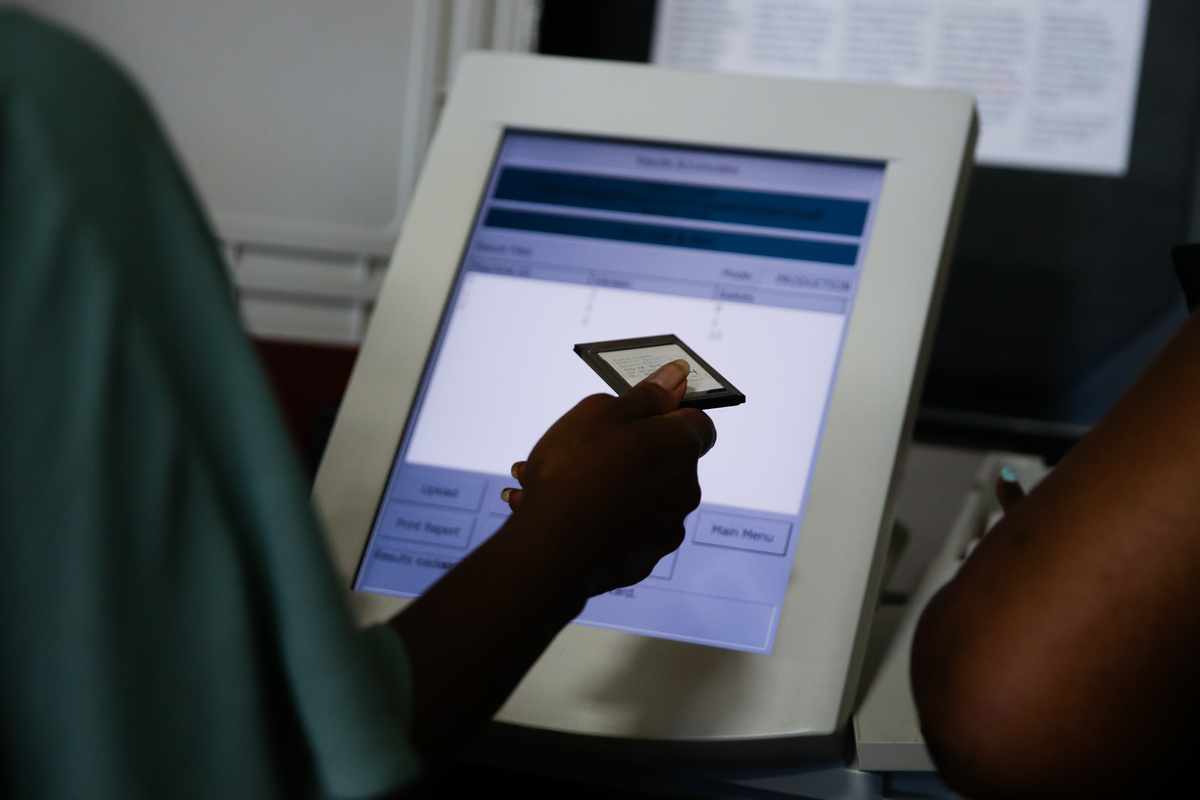 An election official holds an electronic voting machine memory card following the Georgia primary runoff elections at a polling location in Atlanta on July 24, 2018. A group of Georgia voters is suing the state, saying that the electronic machines are not secure.

The security of Georgia's touchscreen electronic voting machines will be under scrutiny in a federal courtroom Wednesday.

A group of voters and election security advocates want a federal district court judge to order the state to not use the machines in this November's election and replace them with paper ballots.

"I will not cast my vote on those machines, as I have no confidence that those machines will accurately record, transmit, and county my vote," said one of the plaintiffs, Donna Curling, in a court filing.

Early voting in the state begins on Oct. 15 and election officials say a switch at this point would mean chaos, and potentially suppress turnout.

Georgia is one of 14 states that use electronic voting machines that do not leave a paper trail that can be audited after an election and is one of five states that exclusively use the machines. Cybersecurity experts along with the Senate Intelligence Committee say the machines can leave elections vulnerable to hacking. In a worst case scenario, hackers could manipulate vote totals without detection.

Voters "should not be forced to accept the electronic equivalent of a broken lockbox to exercise their right to vote," lawyers for the plaintiffs said in written arguments.

An overhaul of Georgia's voting system so close to Election Day would be unprecedented. Maryland and Virginia recently made quick switches away from voting machines without a paper trail, but a switch in Georgia would take place on a much larger scale.

Ahead of statewide elections in 2017, the Virginia State Board of Elections decided to replace touchscreen machines in 140 precincts affecting 190,000 active voters.

Georgia has 27,000 voting machines spread around 159 counties. At the time of the 2016 election, 5.4 million people were registered to vote in the state.

The lawsuit names Republican Secretary of State Brian Kemp, a candidate for governor, along with the state board of elections, and Fulton County in metro Atlanta.

"There is no 'Paper-Ballot Fairy' who, with magic wand at ready, can save Plaintiffs' half-baked plans' from devolving into fiasco," wrote lawyers for Kemp and the board of elections.

Scrutiny On Election Security In Georgia

Kemp, who is Georgia's top elections official, faces questions about his handling of cybersecurity, especially now that he's running for governor.

Georgia was not not one of the 21 states whose election systems were targeted by Russian hackers in 2016. But ahead of the 2016 election, passwords for poll workers and voter registration records were left exposed on an unsecured website at the Kennesaw State University Center for Election Systems, a state contractor.

Once the vulnerability at the center was revealed, and just days after voters and advocates filed their lawsuit over the voting machines, a key server related to the incident was erased. The university said it was following normal procedures in erasing the server.

Earlier this year he formed a commission to examine moving the state to new machines with a paper trail. But he says making the switch ahead of the November midterms "would be an absolute disaster."

Georgians can already vote on paper by requesting an absentee ballot in the mail, completing it, and returning it to county officials. The voters and advocates behind the lawsuit propose expanding this system as an alternative to the electronic machines.

The plaintiffs propose that ballots would be mailed to all registered voters or they could go to their polling place and fill out a paper ballot. To handle the massive increase in paper ballots cast, the plaintiffs says Georgia could use surplus optical scanners from vendors and other states.

But election officials warn it's not that easy and a switch to paper ballots so close to Election Day would lead to long lines, confusion, lower turnout, and burdensome costs.

"We are in the throes of full steam ahead with this election. It would be a big distraction to make such a change this close in," said Lynn Bailey, executive director of the board of elections in Richmond County, Ga., where there are about 120,000 registered voters.

Without counting additional staff hours, Bailey estimates printing costs, extra equipment would mean an additional $65,000 to $75,000 in costs for the county.

The vast majority of Georgia's 159 counties are smaller than Richmond, with less cash to spare. Bailey says a switch to paper ballots would be especially difficult to handle for those counties.