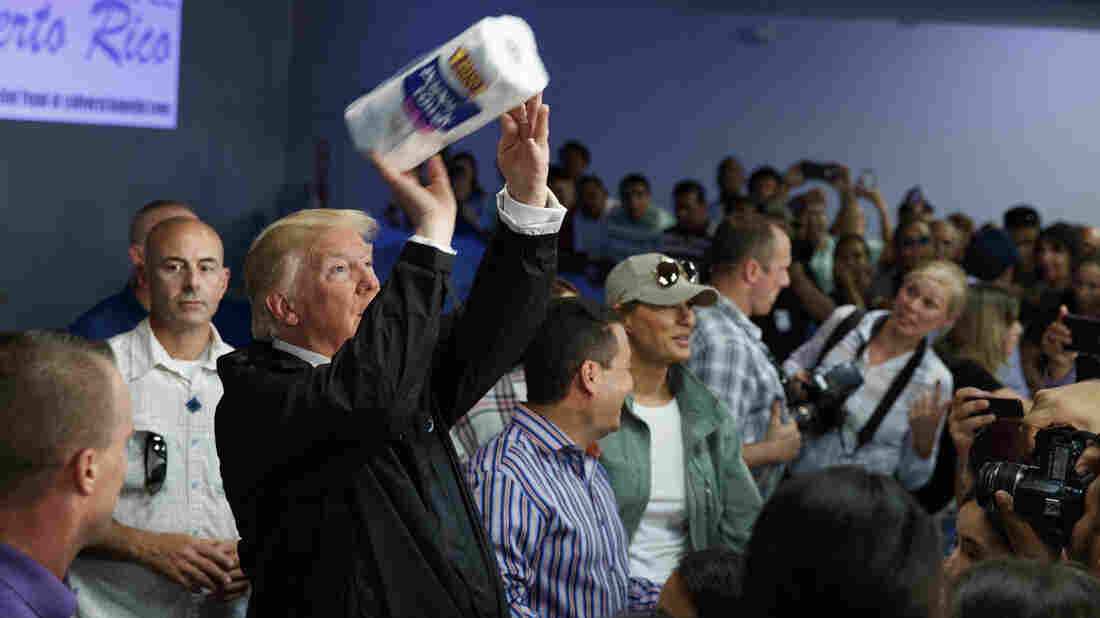 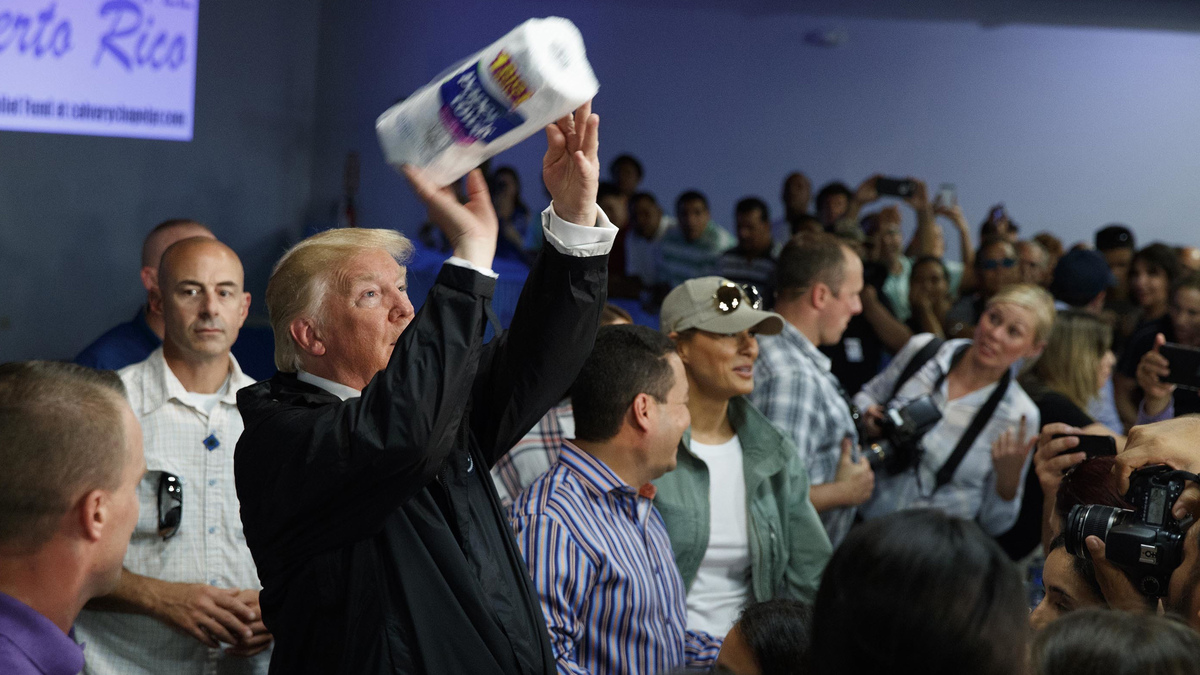 President Trump tosses paper towels into a crowd in Puerto Rico after Hurricane Maria hit the island in 2017.

During an Oval Office briefing on preparations for Hurricane Florence, a reporter asked President Trump if there were lessons to be learned from the widely criticized FEMA response to Hurricane Maria last year in Puerto Rico. Trump's response? In short: Nothing to see here.

"The job that FEMA and law enforcement and everybody did, working along with the Governor in Puerto Rico, I think was tremendous," Trump said in a lengthy answer that reprised his criticisms of the island's pre-storm electric grid, credit problems and geography (that it's an island). "I think that Puerto Rico was an incredible, unsung success."

He further claimed that "in a certain way, the best job we did was Puerto Rico, but nobody would understand that. I mean, it's harder to understand."

Trump's argument, which he tweeted again Wednesday morning, is that because Puerto Rico was hit hard by two hurricanes in a row and already faced infrastructure and other challenges, the federal response was really quite good, despite residents going many months without power, food and water relief failing to get to those who needed it and a death toll that was recently revised upward into the thousands.

We got A Pluses for our recent hurricane work in Texas and Florida (and did an unappreciated great job in Puerto Rico, even though an inaccessible island with very poor electricity and a totally incompetent Mayor of San Juan). We are ready for the big one that is coming!

As NPR's Adrian Florido reported last month, the death toll for Hurricane Maria was just revised from 64 to 2,975.

"The researchers' findings had been long-awaited. Puerto Rico Gov. Ricardo Rosselló commissioned the independent study in February, after months of public pressure over his administration's failure to adequately count the number of hurricane dead. At the time he commissioned the study, the governor said the research team would have the Puerto Rican government's full cooperation, including access to all mortality data.

"As a result of Maria, researchers estimate 22 percent more people died during the six months after the storm than would have had the hurricane not struck. They also said those most likely to have died were poor people and the elderly."

San Juan Mayor Carmen Yulin Cruz (whom Trump has feuded with ever since Maria struck and Cruz went on cable news to beg for more federal help) pointed to the new numbers in her response to Trump's comments. "Success?" she wrote on Twitter. "If he thinks the death of 3,000 people os a success God help us all."

Success? Federal response according to Trump in Puerto Rico a success? If he thinks the death of 3,000 people os a success God help us all.

In a statement tweeted out by CBS's Mark Knoller, Gov. Rosselló referenced Trump's use of the term "successful," saying, "no relationship between a colony and the federal government can ever be called 'successful.' "

Rosselló went on to ask President Trump to extend federal assistance and said now is not a time to pass judgement but "to channel every effort to improve the lives of over 3 million Americans in Puerto Rico."

Trump's pattern: accentuating the positive in the face of disaster

For Trump, celebrating success in Puerto Rico in the face of dire realities on the ground is nothing new. When it comes to disasters, he often takes on the role of cheerleader, boosting first responders, marveling at the incredible size of the storms/fires or touting his own performance rather than the more traditionally presidential somber offers of sympathy or resolve. On a visit to the island last October to survey damage, he bragged about the then-relatively low death rate, even as hospitals struggled to keep the power on and the FEMA response was only just ramping up.

FACT CHECK: Who Gets Credit For The Booming U.S. Economy?

"What is your death count as of this moment?" he asked local officials. "17? 16 people certified, 16 people versus in the thousands."

He then went to a church where supplies were being distributed to those in need and tossed paper towels into the crowd like they were free T-shirts at a sporting event.

On the matter of the death count, a White House official who declined to speak on the record said state and local officials are responsible for mortality numbers, adding that the study used by Puerto Rico's governor to set the new, higher death count for the hurricane took "more expansive views of mortality both in disaster impact and disaster time than any previous storm."

In a statement at the time, press secretary Sarah Huckabee Sanders said, "The President remains proud of all of the work the Federal family undertook to help our fellow citizens in Puerto Rico. The devastating back-to-back hurricanes were met with the largest domestic disaster response mission in history."

The federal response was actually huge, but report found deficiencies

The federal disaster response isn't the great unsung success Trump claims, but it was massive. A recent Government Accountability Office report described it this way:

"FEMA efforts in Puerto Rico alone were the largest and longest single response in the agency's history. As of April 2018, FEMA had obligated over $12 billion for response and recovery for Hurricane Maria (see figure below) reflecting the scale and complexity of efforts given the widespread damage. FEMA tasked federal agencies with over 1,000 response mission assignments for Hurricanes Maria and Irma in the territories at a cost of over $5 billion, compared to about 400 such assignments for Hurricanes Harvey and Irma and the California wildfires combined. For example, FEMA assigned the U.S. Army Corps of Engineers the mission to install over 1,700 emergency electricity generators in Puerto Rico, compared to the 310 for the response to Hurricane Katrina."

But that same report also found deficiencies in the federal response. Hurricane Maria was the third hurricane to hit the United States in short succession last year, leaving FEMA stretched thin and causing logistical challenges in deploying personnel. The report says Puerto Rico and the U.S. Virgin Islands weren't prepared for a category 5 hit and loss of power and communications "led FEMA to assume response functions that territories would usually perform themselves" and the number disasters all in a row meant debris removal contractors weren't available to immediately begin the first steps of recovery. And, remarkably "in October 2017, 54 percent of staff were serving in a capacity in which they did not hold the title of "Qualified"—according to FEMA's qualification system standards."

And the challenges continue in Puerto Rico — CBS's David Begnaud just reported a large number of water bottles, possibly millions, intended for Hurricane Maria relief had been left sitting on an airport runway for nearly a year.

BREAKING: What may be millions of water bottles. meant for victims of Hurricane Maria, have been sitting on a runway in Ceiba, Puerto Rico, since last year, according to @FEMA, which confirmed the news to me, late tonight, after pictures, posted today on social media, went viral. pic.twitter.com/jidGJAvCyJ

In its own after action review, FEMA noted a number of challenges and deficiencies and areas of needed improvement. The same unnamed White House official said in a statement: "The President endorses the After Action Review undertaken by FEMA in the wake of the historic 2017 disaster season and the Administration has already implemented many of the recommendations from the review."