Accessibility links
Trump Administration Transferred $9.8 Million From FEMA To ICE The Department of Homeland Security said it needed an extra $200 million to detain and deport migrants. Among the cash that covered the shortfall: FEMA funds earmarked for recovery and preparedness. 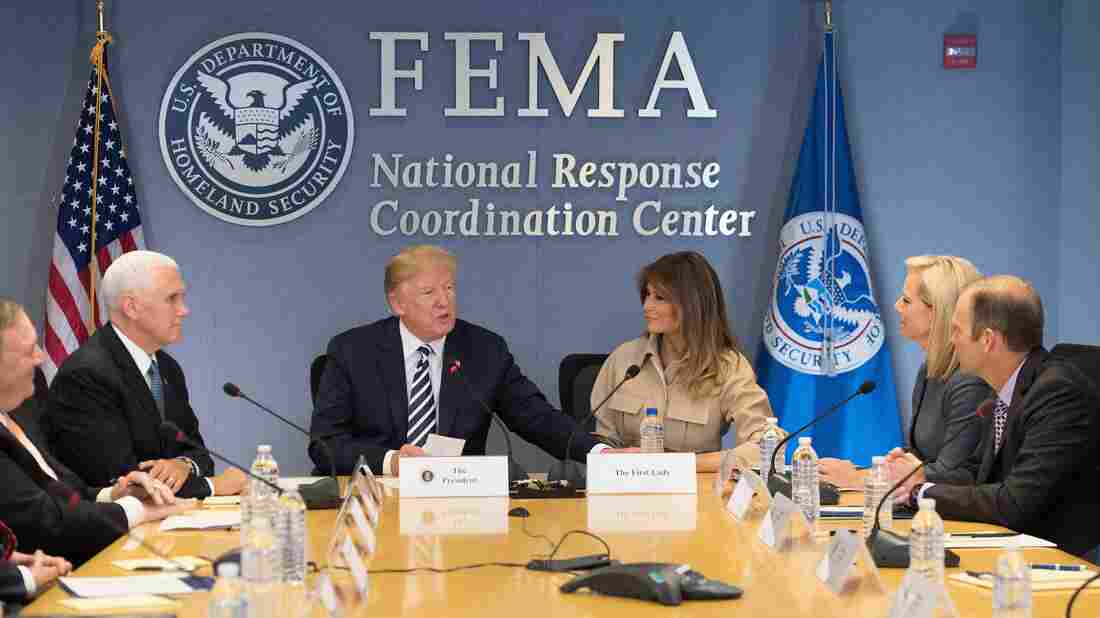 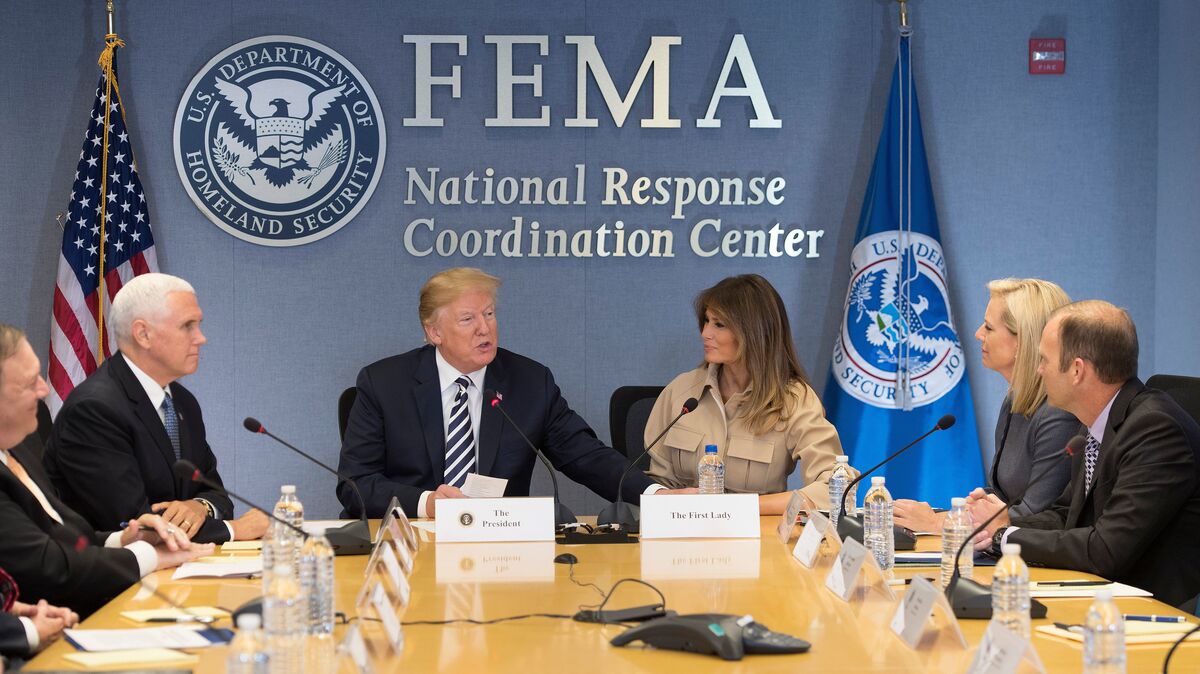 This summer, the Trump administration transferred nearly $10 million away from the agency that responds to disasters and emergencies, redirecting it toward one of President Trump's top priorities — the deportation of undocumented residents of the U.S.

The funds transfer is prompting the Federal Emergency Management Agency to cut back on training, IT security and infrastructure investments, according to a document sent to Congress and released by Democratic Sen. Jeff Merkley, D-Ore.

Merkley calls the transfer "reprehensible," and immigration advocates say it highlights an alarming shift in priorities, but the White House is adamant that the redistribution of funds will have no harmful effect on the response to Hurricane Florence.

In a briefing Wednesday, a FEMA response and recovery official told reporters the agency has "plenty of resources" to respond to the storm, currently approaching the Carolinas and Georgia.

The transfer of funds to Immigration and Customs Enforcement "has not impacted our situation whatsoever," said Jeff Byard, the associate administrator of an arm of FEMA.

The fund transfer was revealed in a June 30 document obtained by Merkley, a vocal critic of Trump's immigration policies who helped draw attention to the separation of families at the border. His office has shared the file with NPR.

The Department of Homeland Security, which includes both FEMA and ICE, told Congress that ICE needed an extra $200 million to cover the costs of detaining and deporting more migrants than the agency had expected.

To cover the shortfall, DHS "reprogrammed" its financial resources, which is permitted under budget rules.

Merkley, who is a member of the Senate Appropriations Committee but does not sit on the Homeland Security subcommittee, nevertheless acquired a copy of the document describing the transfer and released it on Tuesday. He appeared on MSNBC to discuss the transfer.

On Twitter, Merkley called the decision to transfer funds out of FEMA — right before hurricane season — "unbelievable" and "reprehensible."

DHS argues in the document that the impact on FEMA will be "minimal."

Because of the loss of the $9.75 million, FEMA "will curtail training, travel, public engagement sessions, IT security support and infrastructure maintenance," DHS writes.

Without the transfer, the document states, "ICE will not be able to deport those who have violated immigration laws. ICE could also be forced to reduce its current interior enforcement operations."

FEMA receives more than $16 billion in funding each year, about twice the funding earmarked for ICE.

The transfer was approved by the Republican chairs of the House and Senate Homeland Security appropriations subcommittees, but not by the rest of the subcommittees' members.

Democratic Sen. Patrick Leahy of Vermont, the vice chairman of the Senate Appropriations Committee and a member of the Homeland Security subcommittee, sent a statement to NPR denouncing the "hefty price" of Trump's immigration policies.

"Now our Eastern Coast is left even more vulnerable in the path of Hurricane Florence," Leahy said. "I am hopeful that the administration will see the consequences of its actions, and begin to work with Republicans AND Democrats to actually address the problems in our immigration system."

The Department of Homeland Security has forcefully resisted any suggestion that disaster readiness has been affected by the fund transfer.

DHS spokesman Tyler Houlton called Merkley's announcement "a sorry attempt to push a false agenda," without denying the authenticity of the document.

Under no circumstances was any disaster relief funding transferred from @fema to immigration enforcement efforts. This is a sorry attempt to push a false agenda at a time when the administration is focused on assisting millions on the East Coast facing a catastrophic disaster.

Houlton stated that the funds did not come from disaster relief funding, which is a separate pool of money within FEMA, and therefore could not have been used for hurricane response.

Moira Whelan, a former DHS official, told The Washington Post that Houlton was "parsing words," because money outside the Disaster Relief Fund is still used to prepare for disasters and improve the response to them.

"This comment from FEMA's spokesperson is as factual as the president's assertion that Administration's response to Hurricane Maria was 'incredibly successful' and 'one of the best jobs that's ever been done,' " Zaccaro said via email.

Meanwhile, immigration advocates are concerned not just about where the money came from, but where it went.

"There's perhaps never been a clearer articulation of this administration's priorities than this transfer document: cruelty over compassion. While Puerto Rican families struggled to survive a disaster our government largely ignored, the White House and DHS took funds from FEMA's coffers to jail more asylum seekers and beloved community members," Heidi Altman, the director of policy for the National Immigrant Justice Center, told NPR via email.

"DHS has become masterful at manipulating the appropriations process to pursue its political agenda of jailing and deporting as many immigrants as they can," she said. "Congress has complete authority to reign in this mismanagement and the systemic abuses it enables."

This June, a group of immigrant and human rights groups raised the alarm about ICE's requests for fund transfers, accusing DHS of "asking for forgiveness rather than permission after dramatically overspending its appropriated budget in ways both morally reprehensible and fiscally irresponsible."

"The Committee strongly discourages transfer or reprogramming requests to cover ICE's excesses," the report stated. Future requests should include "transparent and publically-available evidence" that the money is required because of "circumstances ... that are truly beyond ICE's control," the senators said.

The funds redirected from FEMA this summer covered only a small portion of ICE's overspending. (A fraction of the transferred funds also covered extra costs the Secret Service incurred in protecting the White House.)

Other DHS operations also saw their budgets cut to cover detention and deportation costs, according to the document released by Merkley.

The Coast Guard is losing $14 million it would have spent on maintenance, while the Federal Air Marshal program is being decreased and the Countering Weapons of Mass Destruction office is not getting funds for planning and training materials.