Accessibility links
In The Wan, Airless 'The Children Act,' A Judge Shows Poor Judgment Emma Thompson stars as a British High Court judge who becomes embroiled in the life of a teenager brought before her, for reasons about which "it's hard to tell and harder to care."

In The Wan, Airless 'The Children Act,' A Judge Shows Poor Judgment

In The Wan, Airless 'The Children Act,' A Judge Shows Poor Judgment 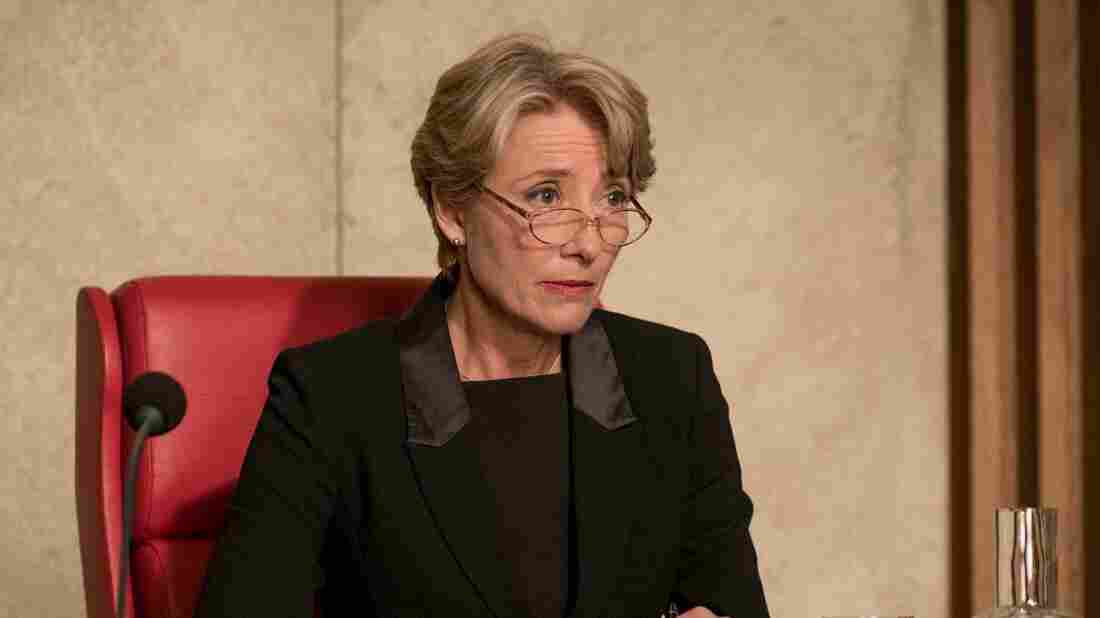 Fiona Maye (Emma Thompson) presides over a humorless script in The Children Act. A24 hide caption 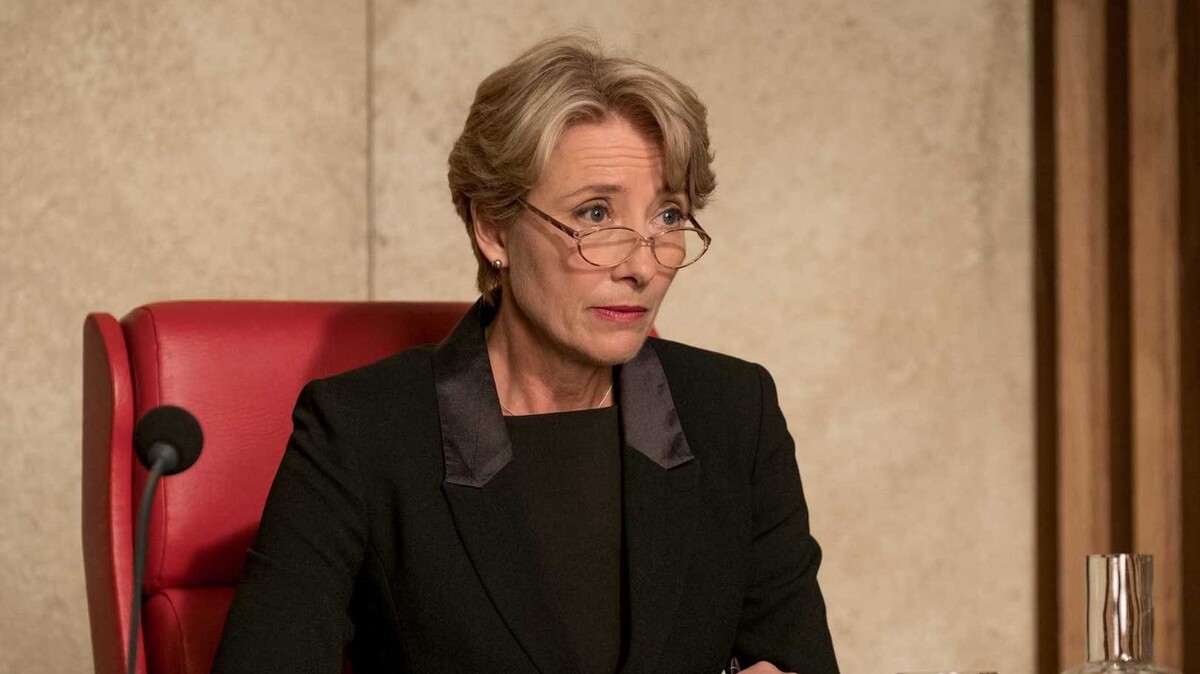 Fiona Maye (Emma Thompson) presides over a humorless script in The Children Act.

As she moves through middle age, there's a whiff of acid in every Emma Thompson performance that adds a lively bump to the actress's Stateside image as an eternally flowering English Rose. The bracing asperity that juiced Thompson's self-directed turn as a warty governess in Nanny McPhee, as a bigoted headmistress in An Education, as the neurotic Mary Poppins author P. L. Travers in Saving Mr. Banks, now pops up in more subtle guise in The Children Act, a near-fatally tasteful British drama adapted by Ian McEwan from his 2014 novel and directed by Richard Eyre.

We meet the cranky but humane High Court judge Fiona Maye — My Lady, to those who serve her — as she prepares to try the case of seventeen-year-old Adam (Dunkirk's Fionn Whitehead), a Jehovah's Witness with leukemia who has refused a life-saving blood transfusion on religious grounds. His devout parents (Ben Chaplin and Eileen Walsh) support Adam's decision, but British law is quite clear about what's supposed to happen when a minor's life is in danger, even from himself. So what looks to become a courtroom drama about the battle between State authority and religious freedom soon takes a sharp turn into more personal wars when Judge Maye puts her ruling on hold while she visits Adam in the hospital to try to gauge his reasoning.

This is highly irregular behavior, and becomes a lot more so when we find My Lady singing a bedside Yeats poem, with the sensitive defendant accompanying her on a battered guitar. Thereafter she finds herself stalked by an apparently recovered Adam, who's now legally an adult and who believes Fiona is the answer to all the outstanding life questions his proletarian parents can't cope with. We're invited to believe that too: Discreet class snobbery courses through every reverential swing of the camera around Fiona's apartment upholstered in gracious greys; every zoom over her elegantly tailored black frocks, power suits; every scene of her rehearsing with a colleague for a Bach piano recital. Fiona reeks of culture and refinement, while Adam's working-class parents, on the other hand, don't exist outside their fundamentalist beliefs. The bad faith lies less with them than with a film that airbrushes them out of the elegant picture.

Never mind that Fiona's devotion to her work has all but destroyed her own personal life. She barely notices the frustration of her loving husband (Stanley Tucci), who early on announces — understandably, if improbably — that since they haven't made love in a year, he's about to embark on an affair. The couple has no children. And having reached out to Adam in violation of protocol, Fiona proceeds to repel — with telling ambivalence — every effort by the earnest teen to burrow under her skin. When he succeeds anyway, she suffers internal commotion on the grand scale. Meaning, she runs out on a Christmas recital to visit Adam. When that backfires, she walks through the rain weeping while ruining a very lovely emerald evening gown. Easy comfort awaits.

What has brought Fiona to this parlous state? Did she offer the boy too much or too little? Is she in love or in egregious loco parentis? It's hard to tell and harder to care, not least because the judge's breakdown comes long after the movie has begun a long, slow slide into bathetic inconsequence that can't be stemmed by Thompson's modulated restraint or the excellent backup she gets from Tucci and the usual assemblage of terrific British actors. So parched of saving humor is the film that one wants to extract every moment of comic joy from the great character actor Jason Watkins as Fiona's meticulous assistant, inevitably named Nigel. "Have you ever been wild and free, Nigel?" inquires his workaholic boss? "No, never, My Lady," the startled factotum deadpans. "Thank God."

The problem lies less with Eyre's smooth directing than with the attenuated material, adapted from a rather anodyne novel that's far from McEwan's best. The movie is of a piece with the director's capable mid-career films (Iris, Notes on a Scandal), none of which has ever bettered his wonderful 1983 debut feature, The Ploughman's Lunch. McEwan scripted that political drama too, and it's hard to square his densely witty screenplay there with the clanging bombast of The Children Act, which is studded with statements of intent ("I'm going to have an affair") or import ("I left this marriage for two days. You left this marriage years ago"), or throwaway lines that airily dispose of significant subtexts ("Just too busy to have children"). Characters move through their posh habitats, explaining what they've done, are about to do, should have done years ago. Their confusion is fine; the fuzziness of the filmmaking less so.

At once wan and self-important, The Children Act dances around the psychological complication and philosophical depth that have brought some of McEwan's other novels such renown along with the best of the films they've inspired, like Enduring Love and Atonement. Is the film an inquiry into reason versus faith? The divorce of thought from feeling in a woman who has lost her bearings? In a movie so beautifully dressed and well-mannered, it feels almost churlish to ask if maybe the empress wears no clothes.