Accessibility links
Review: 'The Predator' Loses The Scent Director/co-writer Shane Black's attempt to infuse snappy dialogue and dark humor into the alien-hunter franchise works until it, suddenly, doesn't. Blame a mess of a script and cheap-looking effects.

After A Promising Start, 'The Predator' Loses The Scent

After A Promising Start, 'The Predator' Loses The Scent 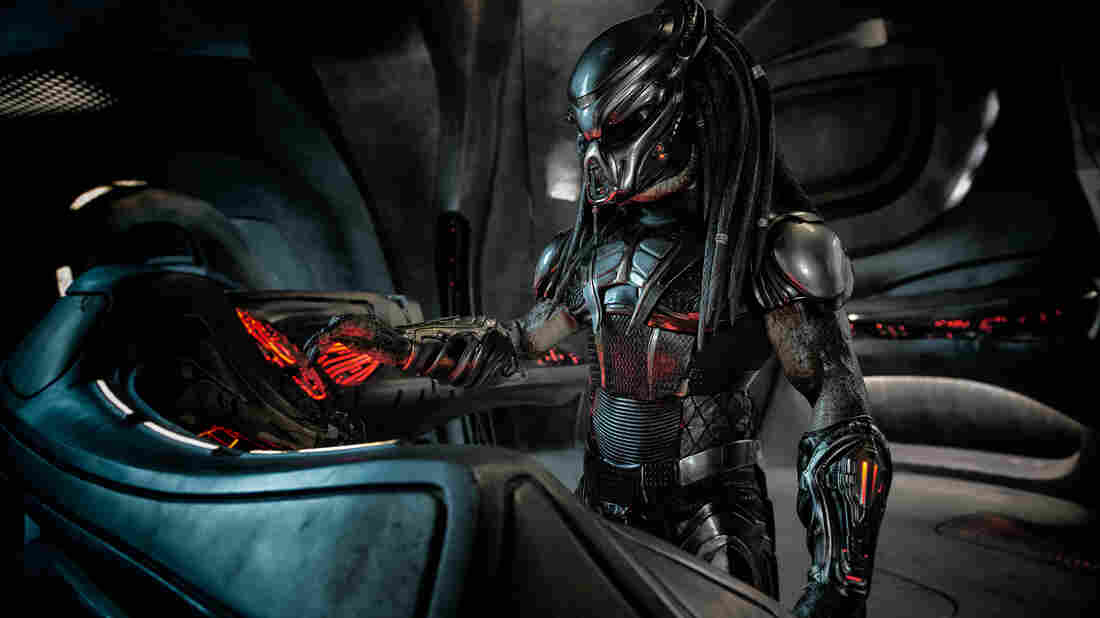 "'Hit Any Key?' Where's the 'any' key?" — The remorseless alien killing machine should probably just turn the console off and on again in The Predator. Kimberley French/20th Century Fox hide caption 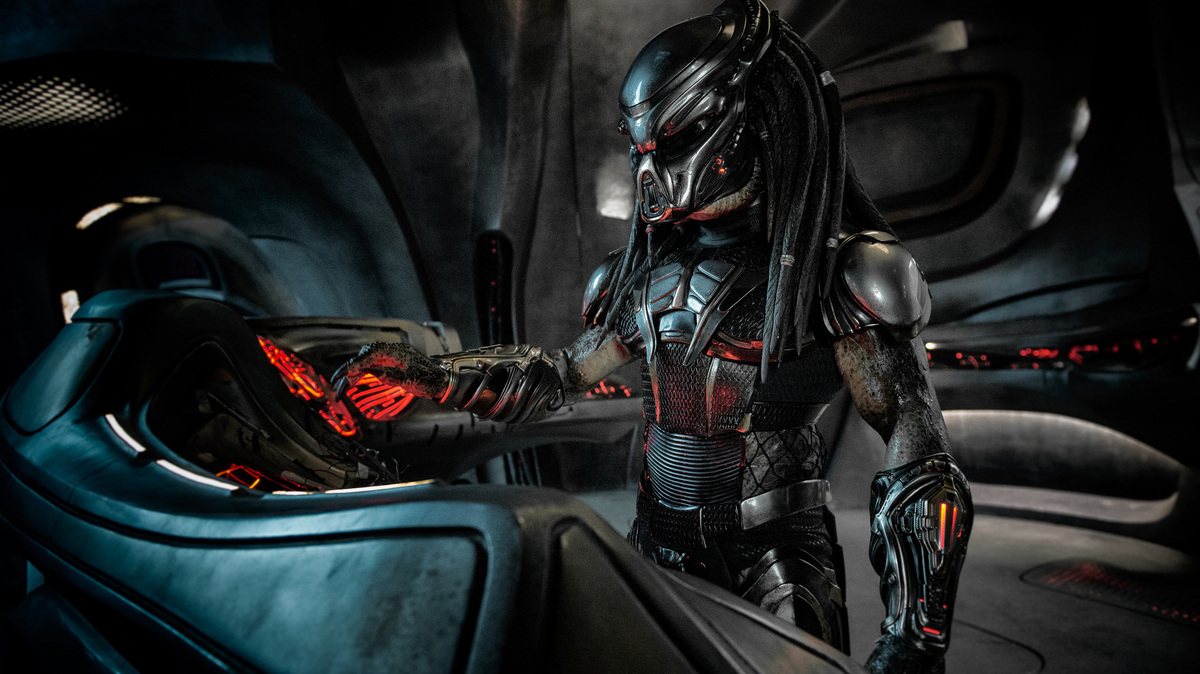 "'Hit Any Key?' Where's the 'any' key?" — The remorseless alien killing machine should probably just turn the console off and on again in The Predator.

You know a movie is lousy when its most ardent partisans — which in the case of Shane Black's new definite-article-attaching Predator sequel-not-reboot The Predator, are me, myself, and this guy right here with the thumbs — are reduced to tepid, mildly defensive endorsements like "It's one helluva good time at the movies!"

The Predator is that, until it isn't. The cast is quirky and fun. The one-liners are as quotable and unprintable as you (I) want them to be. The Easter Eggs for acolytes of this rickety, on-again, off-again franchise are buried deeply enough that they don't stop the movie in its tracks for the 400 normals who will see it, perhaps on airplanes. Though Henry Jackman is credited as the composer, Alan Silvestri's stirring 1987 Predator score gets reprised throughout, and there's some winky-wink casting. (But no Arnold cameo, I am sorry to tell you.)

And the story, co-written by Black and his longtime pal Fred (Monster Squad, RoboCop 3) Dekker? It's something utterly without precedent in the Black oeuvre: a mess.

This series has repeatedly made clear that its titular beasties do not pick fights with unarmed/non-combative opponents, so staying out of a Predator's trophy case would seem to be as easy as staying out of Jaws' Jaws. But humans can always be goaded into fighting. For a species that came up with written language, mathematics, space travel, peanut butter, and Purple Rain, we're still pretty stupid. Humanity's addiction to violence has been the leitmotif of these movies, and that ought to be more than enough to keep Black's joke machine humming along for 105 minutes. Instead, he attempts to broaden the world of the franchise, adding Predator v. Predator to the old formula of Human v. Human v. Predator. (We're not going to talk about those Alien vs. movies, because in this space no one wants to hear me scream.) He also teases the possibility that Predators are more concerned about climate change than we are, but these ideas are underdeveloped. One idea that gets a little too fully developed? A Predator dog.

Black's gift for wisenheimer dialogue has always made his movies feel loose, but structurally, they tend to be watertight, rising steadily to a satisfyingly explosive climax without sacrificing tension or wit or clarity. He even got Iron Man 3 through the auteur-swallowing Marvel machine with his sensibility intact. So just how The Predator, a far less valuable specimen of IP, got away from him is a mystery that perhaps only two detectives with violently clashing personalities who learn to respect and even love one another could unravel.

With its shaggy, silly, midnight-movie vibe, The Predator feels more like Men in Black than Shane Black, but his openly comic take on this material initially seems like a bet that's going to pay off. Boyd Holbrook (the villain from Logan) plays a Special Forces sniper who survives a run-in with a Predator while on a mission overseas, seizing the creature's nifty helmet and gauntlets as evidence of his close encounter. For opaque reasons, he mails these items to his P.O. box back in the States. But the package finds its way to his ex-wife's residence, where it is opened by his autistic son, played by Room's Jacob Tremblay. (The kid attends Lawrence A. Gordon Middle School, named for one of the producers of Predator, 48 Hrs., Die Hard and other long-tailed '80s action pictures.)

Meanwhile, a G-man played by Sterling K. Brown recruits Olivia Munn's evolutionary biologist for "Project Stargazer." As you doubtless recall from Predator 2, the 38th highest-grossing motion picture of 1990, the U.S. government is fully aware that a hostile species has been visiting our planet to hunt big game for decades or centuries. And now Brown & Co. have captured a live specimen, one that is really quite unlikely to wake up on the operating table and break its bonds and slaughter all the puny humans in lab coats like that would ever happen I mean really what're the odds.

One of the elements that helped make Predator '87 an unlikely classic over time is the diversity of its cast — there turned out to be as many future governors or writers or directors with speaking roles in the movie as there were just-plain-actors. The Predator tries to assemble a commensurate crew of 21st century oddballs, casting Keegan Michael-Key, Trevante Rhodes, Thomas Jane, Aflie Allen, and relative newcomer Augusto Aguilera as inmates of a military psych ward with whom Holbrook is confined upon his return to Texas, though it's really Vancouver.

Through some predictable but still fun grinding of gears, this Cuckoo's Nest of killers teams up with Munn — whom the beast spared while staging its own jailbreak — to go prevent the abduction of Boyd Holbrook's kid, whose basement experiments with the otherworldly swag his Pop collected have drawn the notice of their owners. (There's a nice nod to another, more family-friendly '80s extraterrestrial movie when Tremblay, a victim of bullying at school, wears his authentic Predator helmet to go trick-or-treating.) Sterling K. Brown, in turn, has been ordered to clean up his mess. But once the conflict settles into two species each harboring two warring factions, the movie goes slack, marred by bloated, confusing combat sequences, opaque motivations, and cheap-looking visual effects. Predator 2, which was made on a tight budget almost 30 years ago, still looks better than The Predator does. This film is supposed to take place in South America, Maryland, and Texas, but it was shot in Vancouver and looks it. The first couple of movies in this series were filmed on location, which gave me them a rich sense of atmosphere this one just doesn't have.

But far more damning than The Predator's shoddy appearance is the pervasive sense that its maker would rather be making something else. Black's involvement with this franchise is odd: He had a small but memorable role in 1987's Predator not long after Black's spec script Lethal Weapon (another Silver production that hit just a few months before Predator did) established him, in his early twenties, as a marquee scribe. He was fine in the part, but the producers later said they'd only cast him in the hope he'd do some on-set punch-up on the Predator script, a request Black refused. His next couple of screenplays set off bidding wars — an era that ended when 1996's The Long Kiss Goodnight, which had fetched Black an eyebrow-raising $4 million payday, bombed. Since then he's had to fight to make movies like Kiss Kiss, Bang Bang and The Nice Guys, both literate and inventive, highly rewatchable comic mysteries.

And almost no one saw them.

So The Predator it is.