Accessibility links
Hurricane Florence: Scenes From The Carolina Coast As Storm Surges Ashore A Waffle House near the S.C.-N.C. border briefly closed down under orders from police — a sign of how seriously people are taking Hurricane Florence. 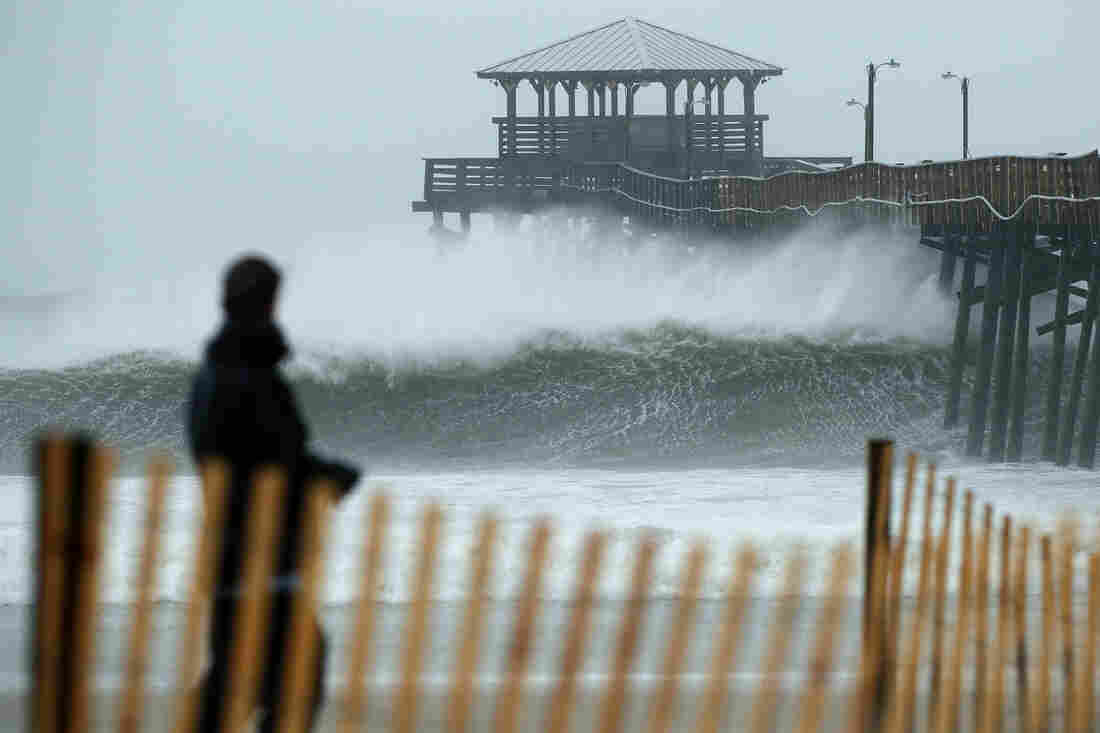 Waves crash underneath the Oceana Pier as the outer bands of Hurricane Florence begin to affect the coast on Thursday in Atlantic Beach, N.C. Coastal cities in North Carolina, South Carolina and Virginia are under evacuation orders as the Category 2 hurricane approaches the United States. Chip Somodevilla/Getty Images hide caption 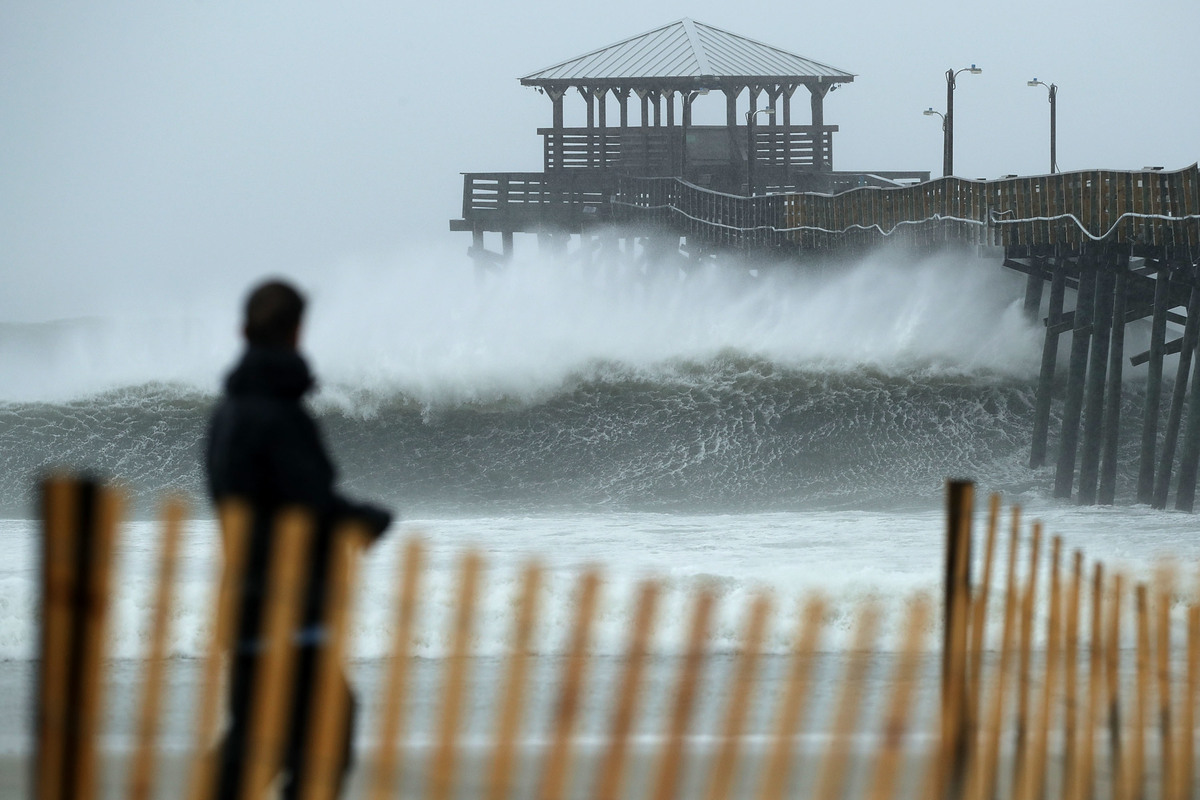 Waves crash underneath the Oceana Pier as the outer bands of Hurricane Florence begin to affect the coast on Thursday in Atlantic Beach, N.C. Coastal cities in North Carolina, South Carolina and Virginia are under evacuation orders as the Category 2 hurricane approaches the United States.

Storm surges of 9 to 13 feet and rainfall up to 40 inches: Those are two of the most dire warnings about Hurricane Florence's effect on parts of North and South Carolina. Thousands have heeded evacuation orders; others are hoping to cope with the storm in their homes or at local shelters.

Weather and emergency officials are warning people in Florence's path not to interpret maps showing the location of the storm's center, or reports that it is losing top wind strength, as signs that they should relax. The storm is huge, the National Hurricane Center says, and its worst effects will reach "a large area regardless of exactly where the center of Florence moves."

Thousands of power outages due to Florence have been reported. As of 10:30 p.m. ET, more than 140,000 customers along the coast were without power, according to outage maps from Duke Energy and the N.C. Electric Cooperatives. 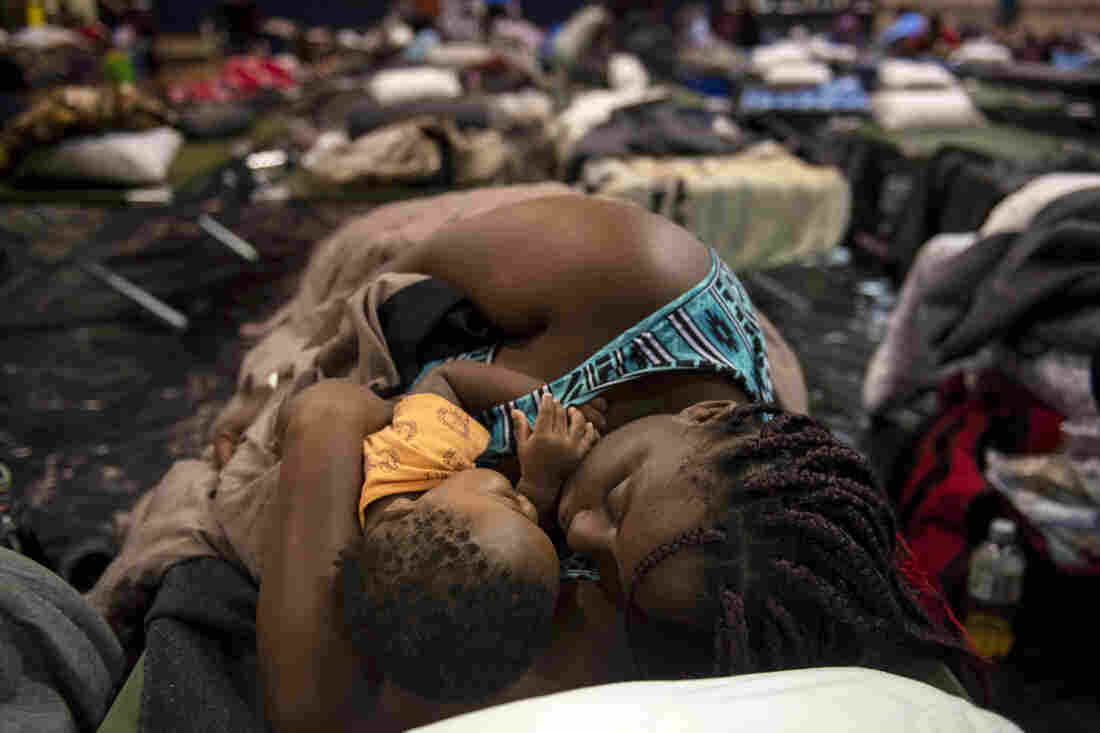 A woman holding a child sleeps at Southeast Raleigh High School in Raleigh, N.C., on Wednesday after being evacuated from her home ahead of Hurricane Florence. Callaghan O'Hare/Bloomberg/Getty Images hide caption 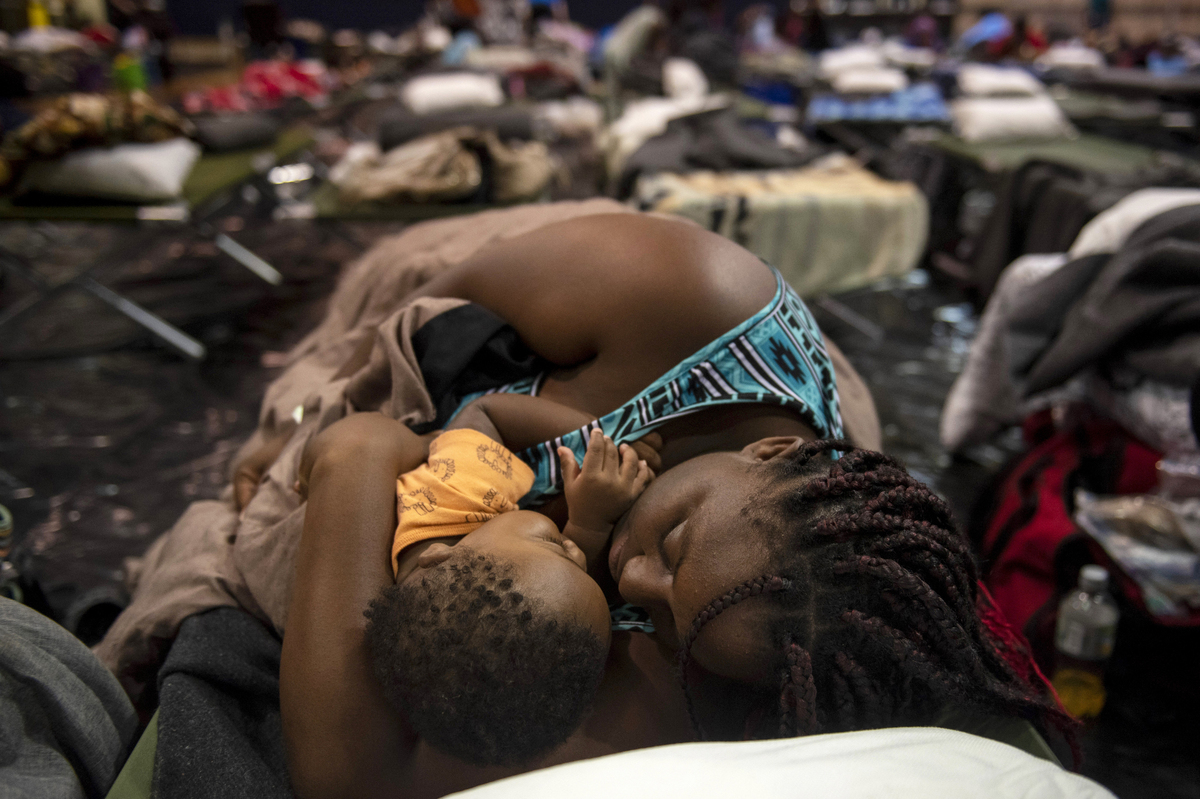 A woman holding a child sleeps at Southeast Raleigh High School in Raleigh, N.C., on Wednesday after being evacuated from her home ahead of Hurricane Florence.

In Shallotte, N.C., a coastal town near the border with South Carolina, emergency orders forced a Waffle House to shut down — an act that was widely seen as a sign of respect for Florence's imposing size and strength. But the restaurant had locked its doors only to comply with a police order.

When staffers realized a nearby Bojangles would stay open, NBC's Matt Bradley says, they opened back up. Customers have included police from nearby Myrtle Beach, an employee told Bradley.

UPDATE: @WaffleHouse did not close willingly. They were told to shut by Shallotte, NC police. But when the Bojangles (@Bojangles1977) across the road stayed open, it became an old-fashioned Southern fast-food stand-off that @WaffleHouse wasn’t about to lose. They’ve now reopened!

That mix of impressions — a respect for this storm's sheer size and the massive amount of rain and seawater it brings, along with a resignation to storms being part of life on the coast — is also part of the reaction in low-lying areas to the north.

Even as the first bands of Florence's rains and strong winds began to whip North Carolina's shore Thursday morning, ocean water ran into the streets on the southern end of North Carolina's Hatteras Island, according to The Virginian-Pilot's Jeff Hampton.

In addition to the storm surge, "There is going to be a lot of rain," North Carolina Gov. Roy Cooper said on Thursday. Noting the heavy bands on the hurricane's northeast quadrant, he added, "We are on the bad side of this storm."

Just below the border, in Horry County, S.C., officials instituted a curfew on Thursday, to last from 7 p.m. to 7 a.m. every day "until further notice." Other areas, including the cities of Darlington, S.C., and Greenville, N.C., imposed their own curfews, set to begin Thursday night.

As the storm approached, Michael Cramer, the town manager of Carolina Beach, N.C., told NPR's Morning Edition that "easily a third of our community will be underwater" if the worst predictions are fulfilled.

Carolina Beach lies on a narrow strip of land in the southern part of North Carolina. From east to west, the community is less than a dozen blocks deep, with the Atlantic on one side and the Cape Fear River on the other.

Cramer says they are expecting ocean water to flow over the sand dunes and bring sand into the town. On the inland side facing the river, Cramer says rising waters will very likely be "lapping at the first floor of our elevated homes." 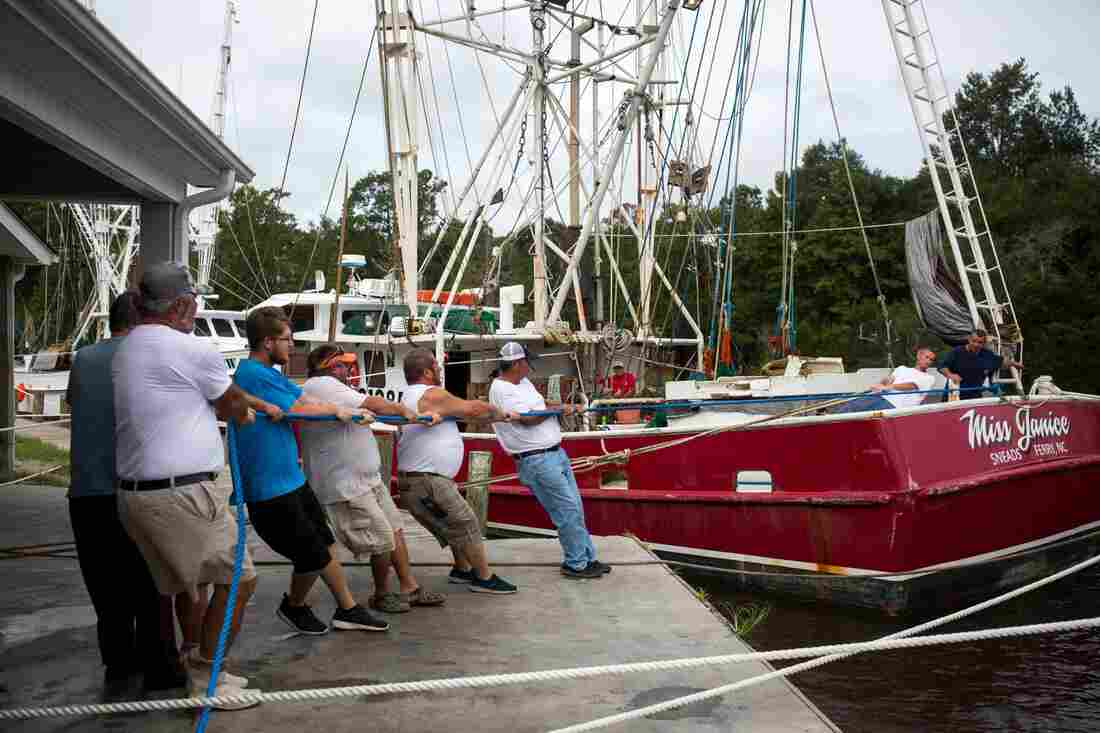 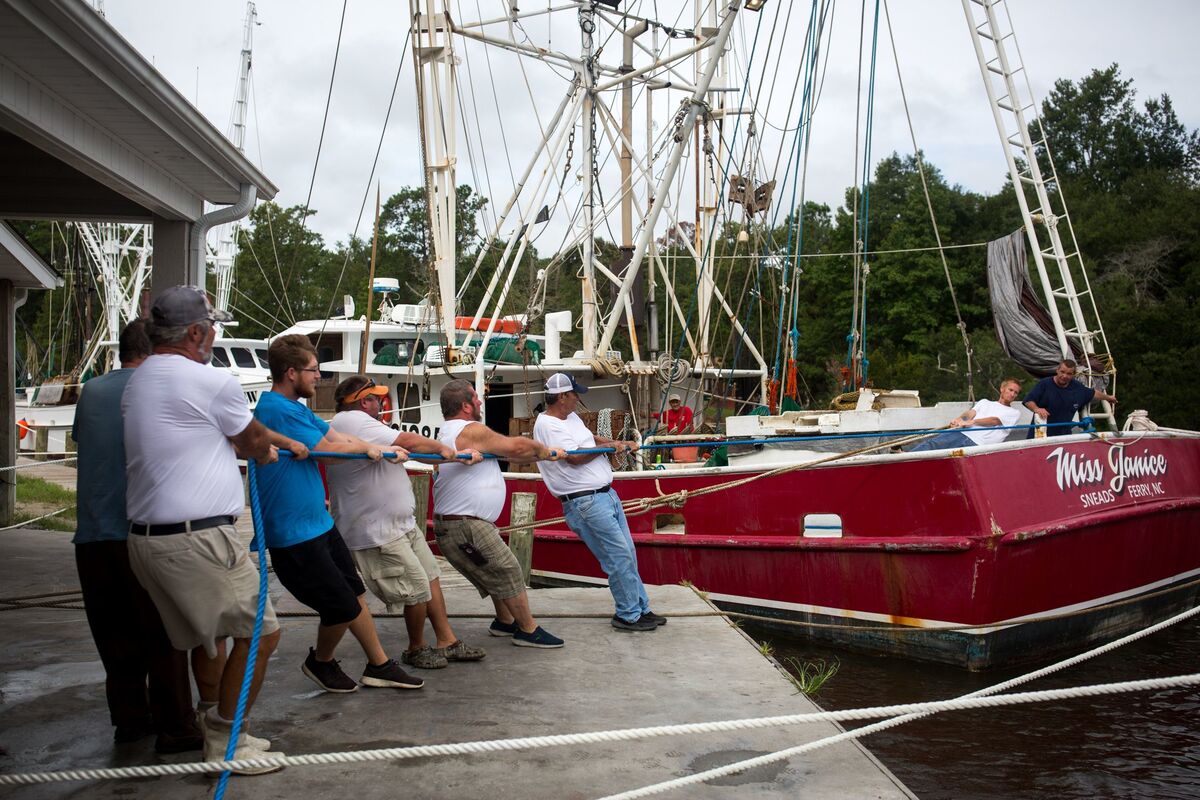 Crew members and boat owners help moor the Miss Janice, a shrimp boat, to the dock at Mitchell Seafood on Wheeler Creek in Sneads Ferry, N.C., on Thursday.

This vulnerable area has been under mandatory-evacuation orders since Wednesday night at 8 p.m., and those who are choosing to ride out the storm have been under a mandatory curfew since that time, to keep people inside.

That has left a sort of ghost town. Cramer said the police chief informed him that as of this morning, the only people in sight were "two or three stragglers."

Along North Carolina's Pamlico River, the area is bracing for a storm surge of up to 13 feet, and all low-lying and flood-prone areas are under mandatory-evacuation orders.

"This time it's important. If you're in a low-lying area, get out," Mac Hodges, the mayor of the town of Washington, told NPR's Brakkton Booker. "Because I don't know that we can go in and get you."

At the nearby Arthur Christian Church, Booker reports, about 20 people were praying together as the storm barreled toward the Carolinas. "Gracious heavenly father God, just with those in the flood zone, may the damage not be so much," they prayed.

For people who stayed behind near the coast, or find themselves facing the brunt of the storm, officials are offering safety advice. Among the tips: Prepare a safety kit and avoid driving through floodwater.

On the Outer Banks, some people are preparing to ride out the storm, despite an evacuation order.

Sam Tillett, a 32-year-old bartender, tells NPR's Sarah McCammon that his family has been here for six generations — and he plans to stay. 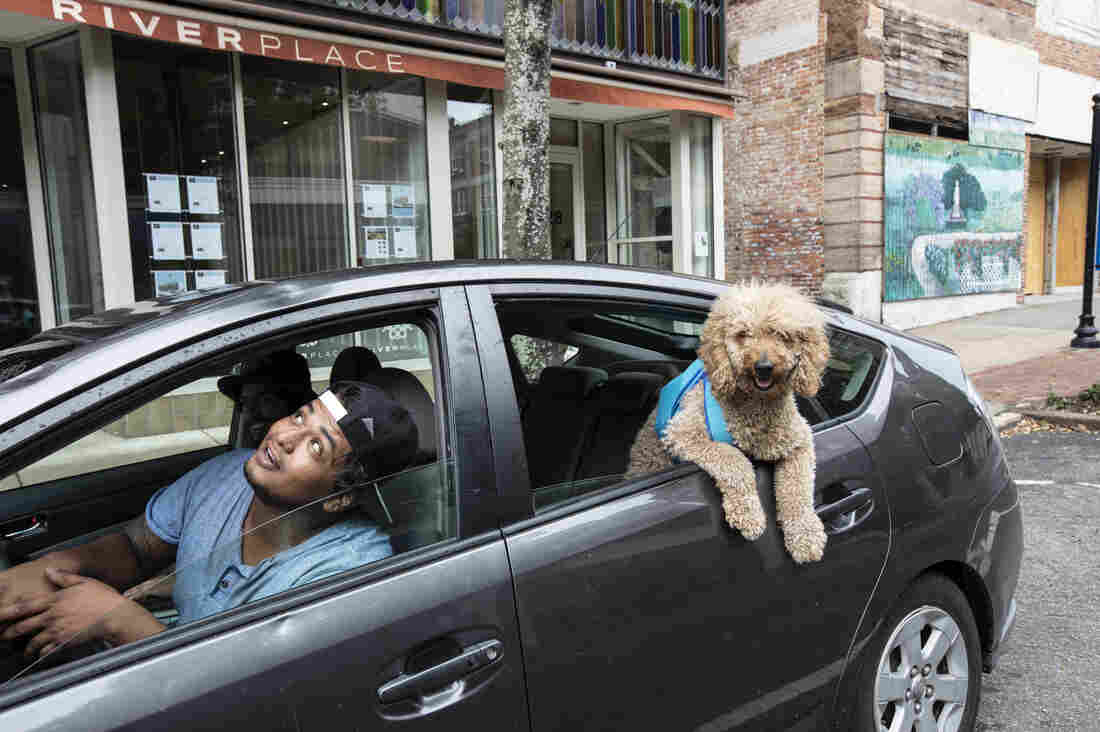 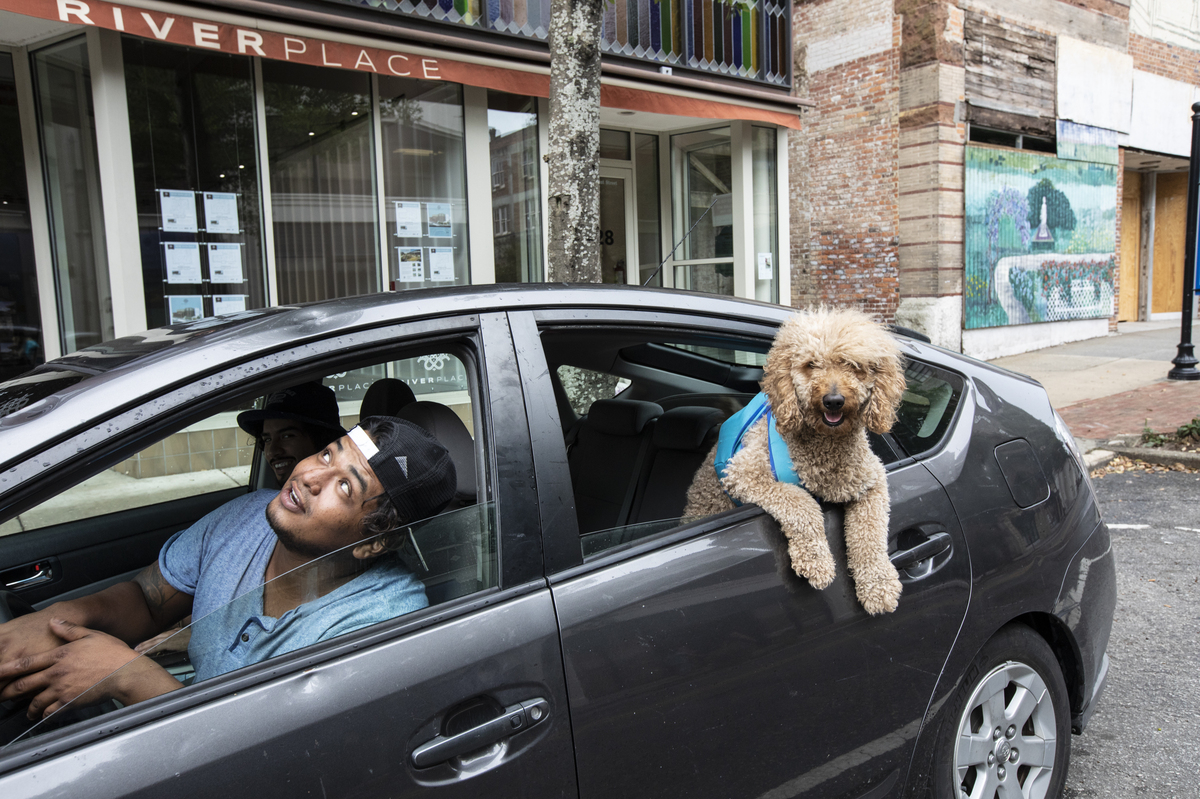 Phyllis B. Dooney for NPR

"I have video games, board games, movies, if we still have power," he tells McCammon. "Tons of food, ice. We've already got ice; the cooler's packed."

His friend Daniel Gomez is also planning to stick around. "It's fun in a sense; at the same time, it's scary — hard to describe if you've never done it before," Gomez tells McCammon.

The Outer Banks Hospital expects to keep its doors open for anyone who needs emergency care during the hurricane, McCammon reports.

The hospital's president, Ronnie Sloan, said it is remaining open for "the same reason we got into health care."

"We are in constant contact with moms who are close to delivery dates, before the storm, and we advise them to maybe leave the county, because there is a time ... that they won't be able to travel during the storm," he tells McCammon.

In light of the powerful storm, at least 12 Division 1 college football games have been moved or canceled, according to the NCAA. The director of athletics at the University of Tennessee has announced that displaced families are welcome to come to its game on Saturday against the University of Texas at El Paso, free of charge.