Accessibility links
Dianne Feinstein Refers Brett Kavanaugh Allegations To FBI Sen. Dianne Feinstein sent a letter to federal authorities dealing with allegations that Democratic sources say were made by a California woman about conduct that allegedly occurred in high school. 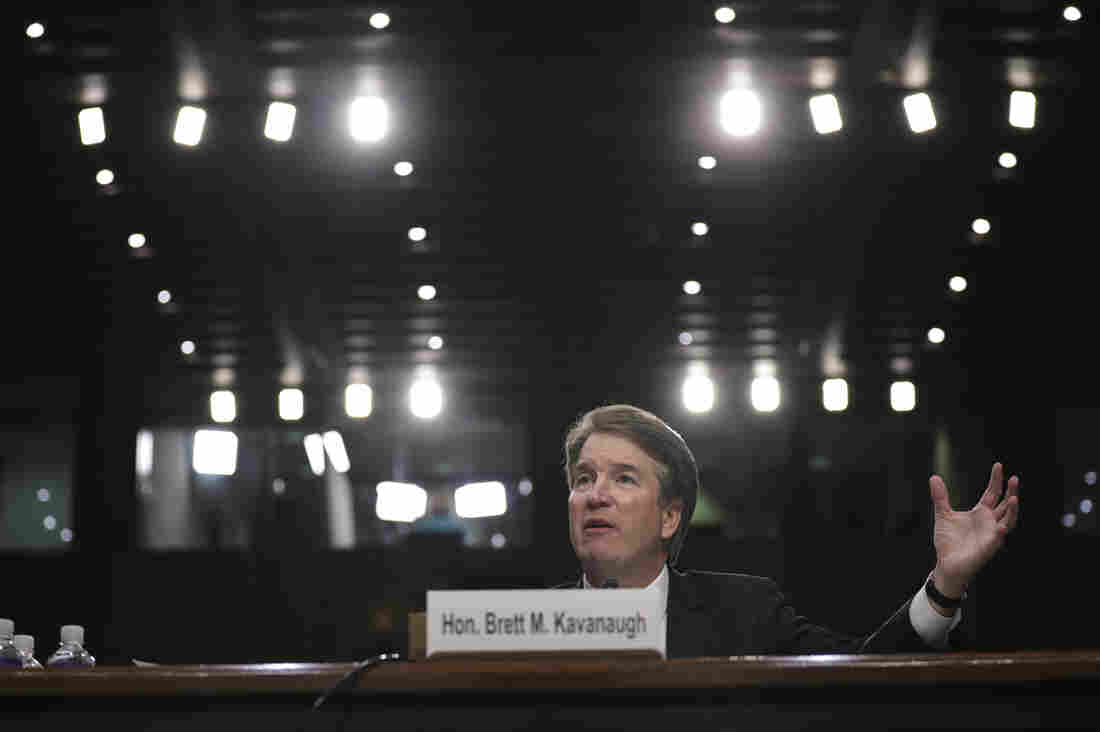 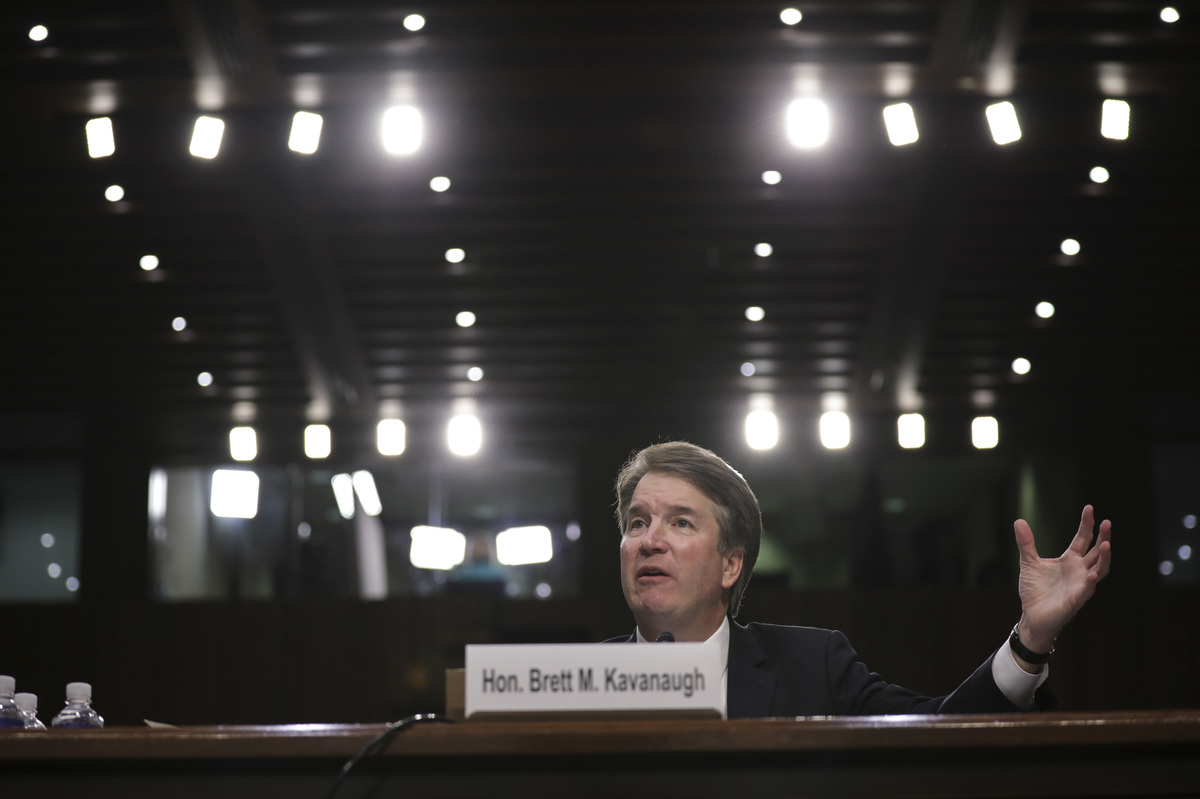 Supreme Court nominee Brett Kavanaugh testifies before the Senate Judiciary Committee on Sept. 6, the third day of his confirmation hearing.

The White House is accusing Senate Democrats of an unfounded "11th hour attempt to delay" a vote on the nomination of Brett Kavanaugh to the U.S. Supreme Court.

Sen. Dianne Feinstein of California, the ranking Democrat on the Senate Judiciary Committee, released a statement Thursday afternoon disclosing that she had referred "a matter" involving Kavanaugh to "federal investigative authorities."

Democratic sources said the "matter" involved allegations against Kavanaugh made by a California woman about conduct that allegedly occurred in high school.

Feinstein said the individual "strongly requested confidentiality, declined to come forward or press the matter further, and I have honored that decision."

Sources added that Democrats feared that doing nothing would open them up to accusations of a cover-up.

Kupec pointed out that throughout his 25 years of public service, Kavanaugh has been vetted by the FBI repeatedly.

Sen. John Cornyn of Texas, who also sits on the Judiciary Committee, drove home that point with these tweets:

I will add: the FBI already performed and has reported on a background investigation on the nominee and this has been made available to all Senators on the Judiciary Committee https://t.co/vccYKP6IdK

The Feinstein kerfuffle capped off a day of bitter partisan exchanges at a Senate Judiciary Committee meeting, with Democrats repeatedly seeking access to further documents from Kavanaugh's six years in the Bush White House, only to be shot down on repeated party-line votes.

"I don't understand the rush to judgment," said Feinstein, observing that when President Obama nominated Elena Kagan to the Supreme Court, "99 percent" of the documents "from her White House years" were turned over to the Judiciary Committee, compared with 7 percent of the Kavanaugh documents.

Feinstein charged that Republicans who head up the committee had repeatedly refused her offer to work on a bipartisan basis to help the National Archives so that more documents could be made available.

After a Feinstein motion to subpoena more documents failed on a party-line vote, there were five more party-line votes on various document questions. Sen. Amy Klobuchar of Minnesota, for instance, noted that the White House has invoked an unspecified constitutional privilege on 100,000 documents from Kavanaugh's two-plus years as associate White House counsel.

Klobuchar proposed that at the very least the White House should supply the traditional "privilege log," listing what privilege is being invoked for each document, and why.

Committee Chairman Chuck Grassley of Iowa said there was precedent for invoking executive privilege, that President Ronald Reagan invoked it on the nomination of William Rehnquist to be chief justice.

But Sen. Patrick Leahy of Vermont, a Democrat and past chairman of the committee, rebutted that argument, noting that he, along with a bipartisan group of senators, met with Reagan to object to the executive privilege claim and that Reagan then withdrew it. Nonetheless, even the motion to subpoena a privilege log was voted down, along party lines.

Sen. Sheldon Whitehouse, D-R.I., accused the Republicans of compromising the Senate's constitutional duties for short-term political gain. Without access to this information, he said, the committee was setting a "damning precedent," leaving itself "neutered" and unable to perform its confirmation duties in a responsible way.

Republicans viewed such complaints as nothing more than an attempt to delay. Following committee rules, Grassley held over the committee vote on the Kavanaugh nomination for one week.

But he then announced the vote would take place Sept. 20 at 1:45 p.m. ET. That prompted an uproar from Democrats, who read out loud the committee rule requiring that committee debate on a nomination cannot be cut off without a majority vote that includes at least one member of the minority party.

Grassley overrode the objection, saying that his GOP colleague Orrin Hatch of Utah, another longtime committee member and former chairman, had once done something similar — and that was "precedent."

There was little mentioned in the public session Thursday about Kavanaugh's written answers to more than 1,000 questions posed by committee members, mainly the Democrats. Most of Kavanaugh's answers simply reiterated his answers from last week's hearing, answers that Democrats had already complained were unresponsive.

But there were some nuggets in the written answers. Responding to Sen. Mazie Hirono, D-Hawaii, Kavanaugh said he had contacted Judge Alex Kozinski last year after Kozinski resigned from the 9th Circuit Court of Appeals, amid allegations of sexual misconduct. Kavanaugh said he contacted Kozinski because he was "concerned about his mental health."

In response to a question from Sen. Chris Coons, D-Del., Kavanaugh said he did "not remember" receiving inappropriate emails of a sexual nature from Kozinski when he clerked for him. And in response to another question from Hirono, Kavanaugh said he "did not communicate with Judge Kozinski very often" after his clerkship, though he worked with him and 10 other judges on a book about precedent and also helped screen law clerks for the man both clerked for, Justice Anthony Kennedy.

Kavanaugh's answer to questions from Whitehouse also seemed to resolve what has been something of a mystery: Kavanaugh's credit card debt. In 2016 he listed debt accrued over two credit cards and a loan, listing the debt as being between $15,000 and $80,000; and in 2017 he listed further credit card debt of between $60,000 and $200,000. This year, however, all the debts disappeared.

At the time of his nomination, the White House attributed much of that debt to baseball season tickets that Kavanaugh purchased for himself and "a handful of friends," but there was no explanation for the persisting debt over two years, nor did the numbers add up.

In his written answers this week, Kavanaugh seemed to attribute much of his debt to his home, which, by his account, was falling apart and required replacing the heating and air conditioning, painting the house exterior and interior, roof repairs, new kitchen appliances, basement flooding problems and waterproofing, and so on. No dates are given for any of these "unanticipated repairs."

"Maintaining an old house like ours, can be expensive," he wrote. And in response to a question about whether he ever had gambling debts, he said no, adding that he had not participated in "fantasy" leagues.

As to the baseball tickets, Kavanaugh said that he bought four season tickets in his name every season from 2005 to 2017, plus playoff packages for the four years that the Washington Nationals made the playoffs. He said he divided the cost of the tickets among the friends who participated in the "ticket draft at my house." No one overpaid or underpaid me for tickets, he said. "No loans were given in either direction." And his friends reimbursed him "to the dollar."

He said that he and his wife paid the full entry fee to the Chevy Chase Country Club, reported as $92,000, and that they pay regular dues, reported to be $9,000, without any discount. "We joined primarily because of the ice hockey program that my younger daughter participates in, as well as the gym," Kavanaugh wrote.