Accessibility links
Thousands Fled Homes After Apparent Gas Explosions, Fires In Massachusetts One person was killed and several injured following blasts and fires on Thursday evening. Dozens of homes were damaged and about 8,000 people have been displaced. The cause is under investigation. 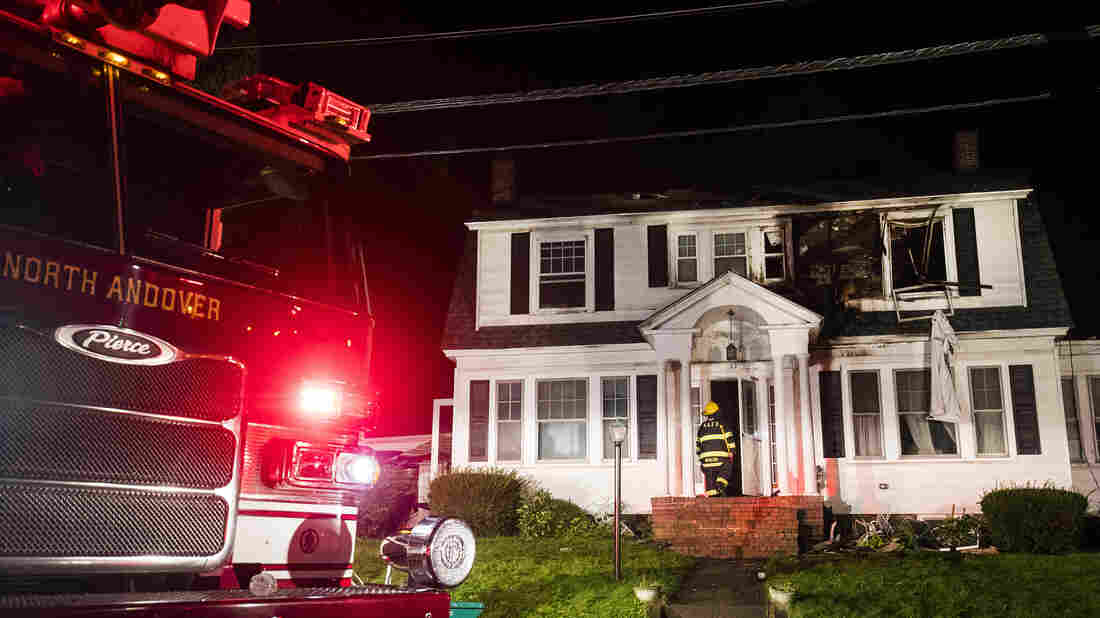 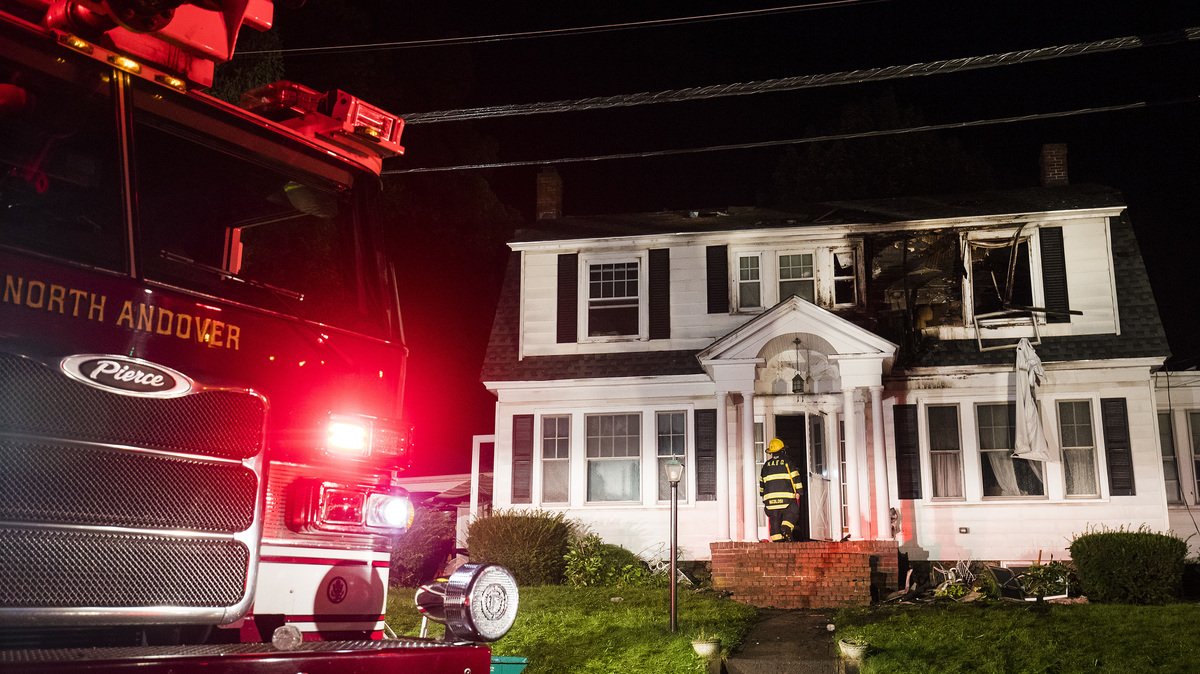 Federal authorities have opened an investigation into a series of explosions that set off fires in several small towns in Massachusetts on Thursday night, killing one person and injuring several others.

The National Transportation Safety Board announced Friday that it is sending a team to investigate "what certainly appears to be multiple explosions involving a natural gas pipeline."

An estimated 8,000 people have been displaced, according to local officials. Fred Thys of member station WBUR reports that residents may not be able to return home until Saturday. 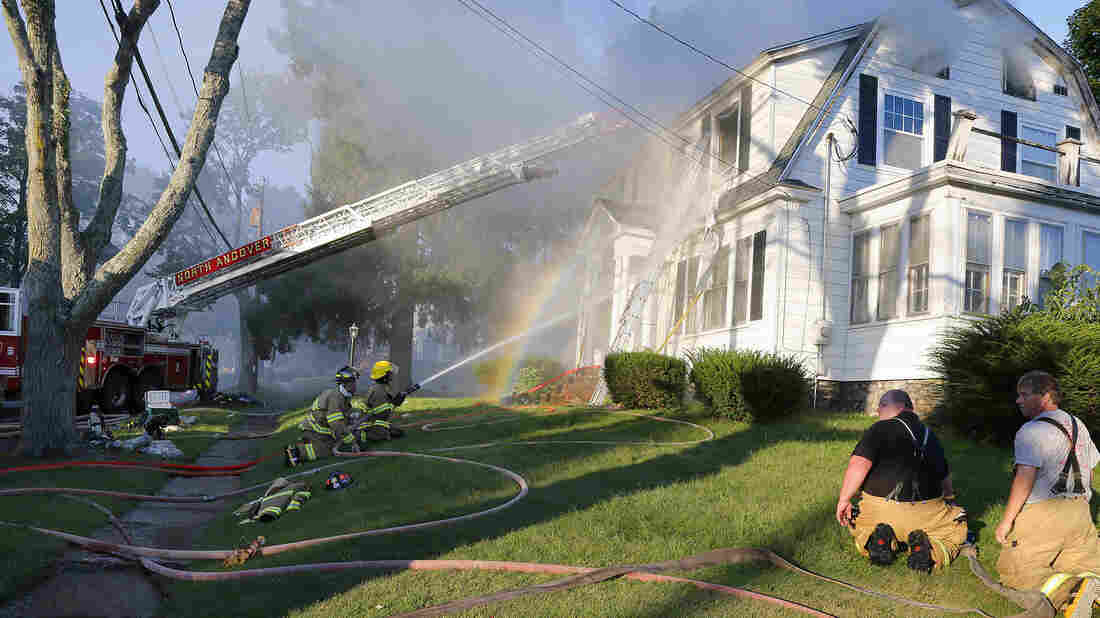 Firefighters battle a house fire in North Andover, Mass., one of a series of fires and explosions on Thursday thought to have been triggered by a gas line that feeds several communities north of Boston. Mary Schwalm/AP hide caption 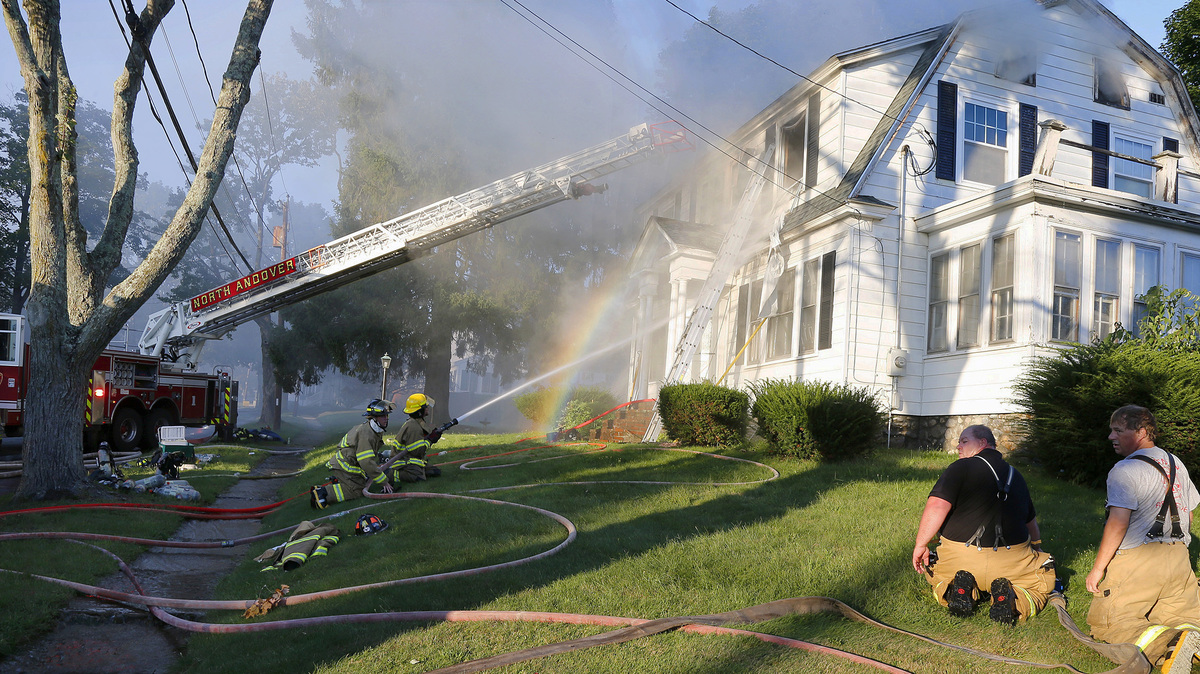 Firefighters battle a house fire in North Andover, Mass., one of a series of fires and explosions on Thursday thought to have been triggered by a gas line that feeds several communities north of Boston.

Massachusetts State Police have confirmed that officials responded to 70 house fires, explosions or reports of gas odors — possibly caused by gas leaks — around the towns of Lawrence, Andover and North Andover on Thursday evening.

Officials urged all residents in the area who are Columbia Gas customers to evacuate, "as should anyone else who smells gas."

MSP Fusion Center has current updated tally of responses to fires/explosions/investigations of gas odor at 70. Spread over wide swath of south #Lawrence and northern part of #NorthAndover with several others across Merrimack River in north Lawrence. pic.twitter.com/a7kBYaWFrJ

"Columbia Gas has not said what went wrong," Thys reported Friday. "State emergency management officials say 'possible gas line over-pressurization' could be the cause of [the] explosions."

An 18-year-old man died when a chimney that had been toppled by an explosion fell on his car in the city of Lawrence, according to the North Andover newspaper, The Eagle-Tribune. The newspaper said 10 people were injured in the gas explosions; however, Lawrence General Hospital reported earlier that 13 people were receiving treatment there.

Officials at the hospital said in a tweet that injuries included smoke inhalation and blast trauma and that one person in critical condition was transported to a Boston trauma center.

At least three people have been injured in Andover, including at least one firefighter, town officials said in a statement. It is unclear whether the people wounded in Andover are part of the group receiving care at Lawrence General Hospital.

At this hour, Lawrence General has received 13 patients as a result of the gas fires. One critical patient was transported to a Boston trauma center, the rest have been treated at Lawrence General. Injuries range from minor to smoke inhalation and blast trauma.

On Thursday night, Lawrence Mayor Dan Rivera told residents they wouldn't be able to go home that evening; state police said gas lines were being depressurized by the company but warned the process may take some time.

Gov. Charlie Baker said, "The depressurization of the lines in the shutdown was designed to ensure that there would be no more fires this evening," although he added firefighters would continue to extinguish fires throughout the night.

Public schools in Lawrence, Andover and North Andover will be closed on Friday because of the fires. 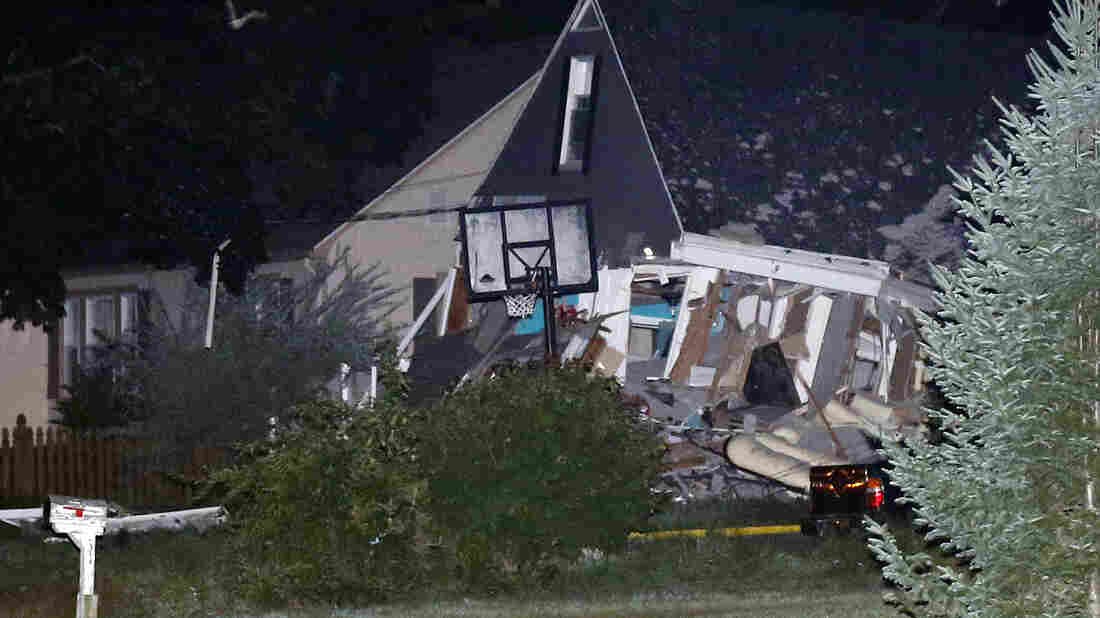 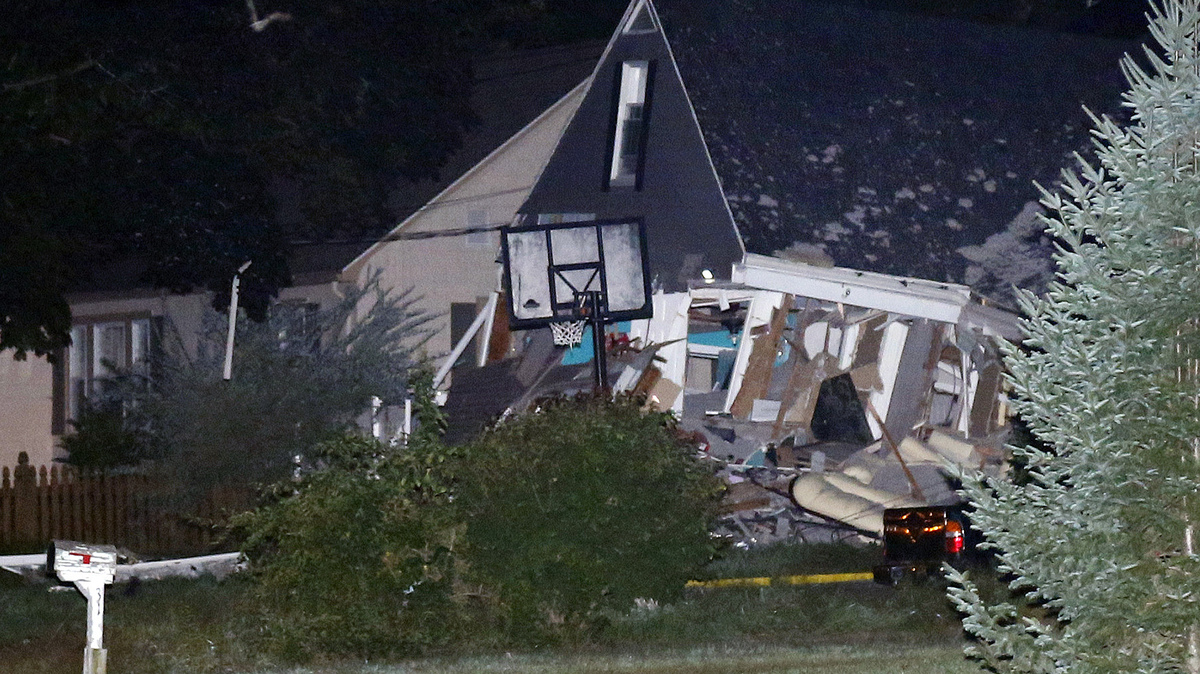 A house in Lawrence, Mass., is destroyed.

Andover Town Manager Andrew P. Flanagan, Police Chief Patrick E. Keefe and Fire Chief Michael Mansfield said Andover fire responders had put out a total of 35 fires. "At peak, 18 fires were burning at the same time," they said, adding that all fires have been extinguished and fire crews will remain in the town throughout the evening.

Columbia Gas has been shutting off all service to customers in all three towns, MPS officials said in a tweet. Electric power was also turned off.

"Columbia Gas company had announced earlier Thursday that it would be upgrading gas lines in neighborhoods across the state, including the area where the explosions happened. It was not clear whether work was happening there Thursday, and a spokeswoman did not immediately comment."

Before evacuating from North Andover, Jeremy Melvin described a chaotic scene near the plumbing shop where he works.

"We have people running to their cars. Multiple fires. There's smoke lining from one end of my vision to the other," Melvin told WBUR's Lynn Jolicoeur.

State Police troopers and local police helped evacuate residents. Off-ramps into the towns were closed while on-ramps remained open to allow residents to get out of the affected areas. 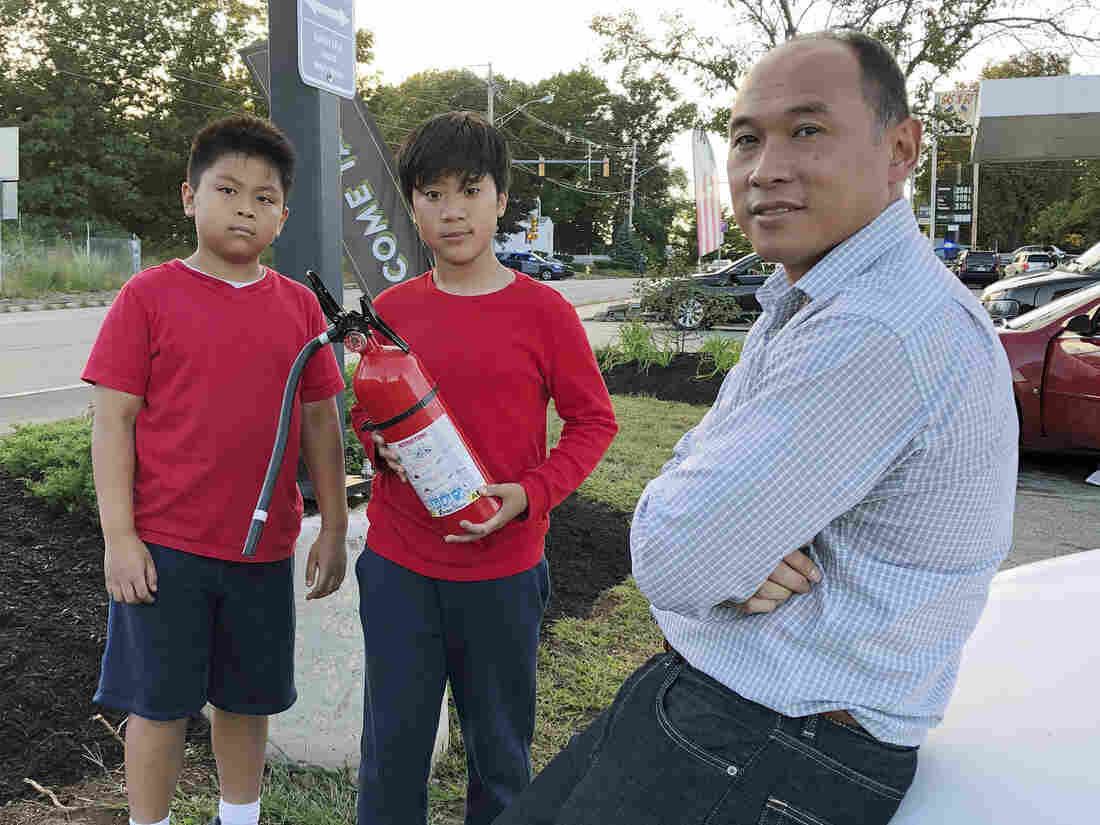 Ra Nam (right), with his sons Evan (left) and Tristan (center), wait in a parking lot outside their Colonial Heights neighborhood in Lawrence, Mass., which was evacuated Thursday because of the fires and explosions. Phil Marcelo/AP hide caption 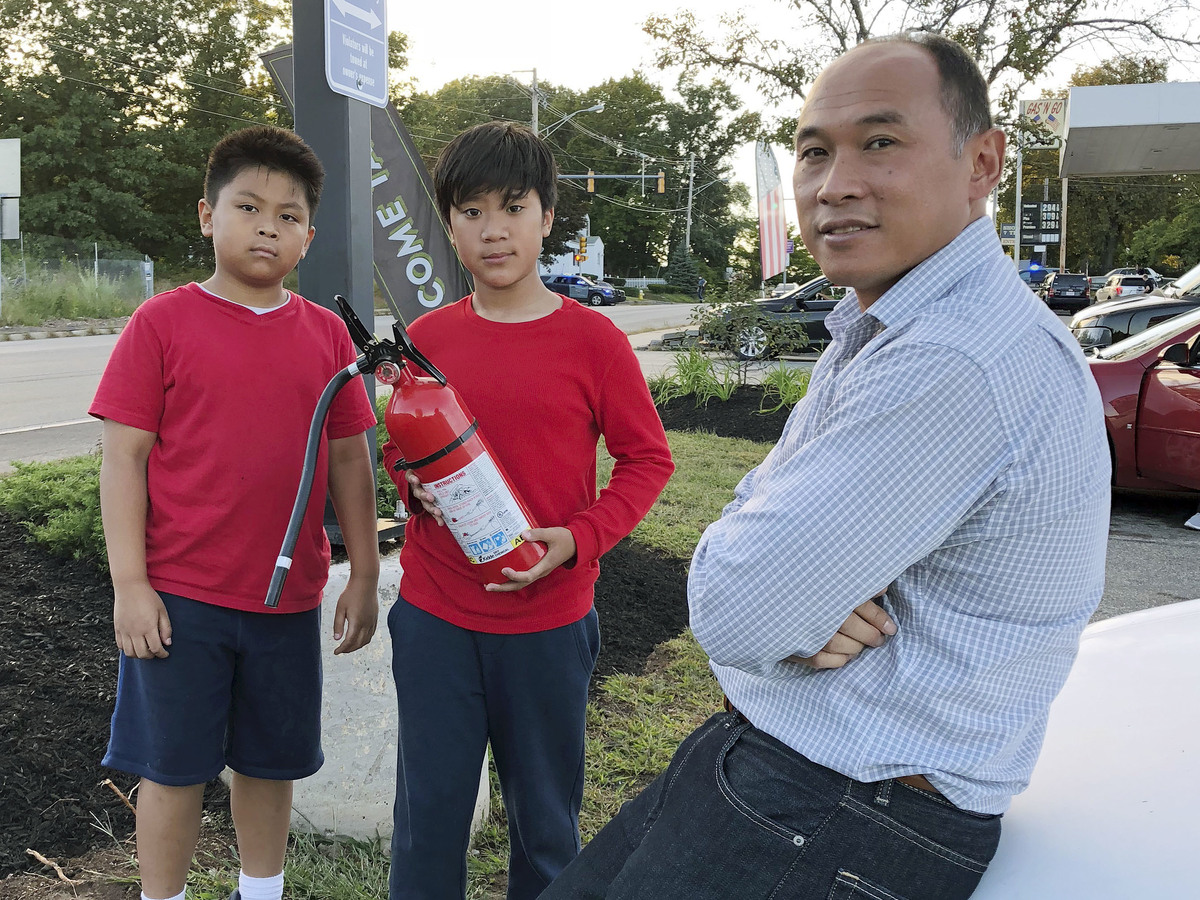 Ra Nam (right), with his sons Evan (left) and Tristan (center), wait in a parking lot outside their Colonial Heights neighborhood in Lawrence, Mass., which was evacuated Thursday because of the fires and explosions.

At one point, Methuen Police Chief Joseph Solomon told USA Today there were so many fires, "you can't even see the sky."

"Holland, a 35-year-old mechanic in a wheelchair, said she had just gotten off a bus returning home when she saw 'a big flash of light' at the house where she had been renting a room for a month.

" 'Good thing I wasn't home or I wouldn't be talking about it,' she said outside an elementary school in Lawrence that the Red Cross had converted into a shelter for about 170 people."

"[Almquist] was able to get into her house and grab her cat before fleeing to her folks' place, but with so many people evacuating at once she says the 15-minute trip took her two hours," Smith reports. "And now she's bracing for what may be days before she can go home."

Teams — each with a police officer, a firefighter and a gas technician — are going door-to-door in the affected area, Smith says, checking on thousands of houses.