Accessibility links
StoryCorps: Siblings Reflect On Brother's Post-9/11 Death Two Sikh men lost their brother in a violent hate crime following the Sept. 11, 2001 terrorist attacks. At StoryCorps, they reflect on his life and how they were treated after the terrorist attacks. 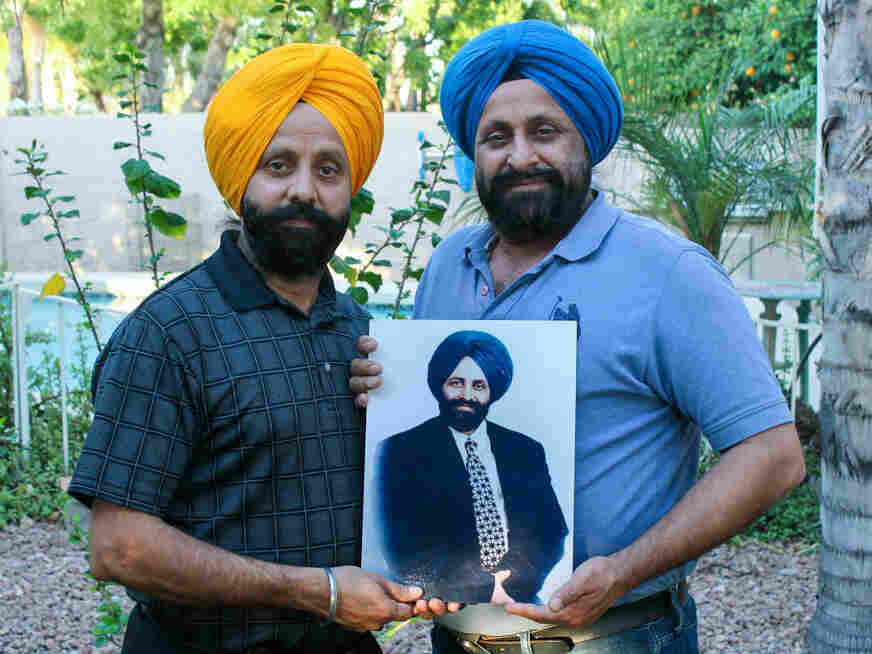 Rana Sodhi (L) and Harjit Sodhi hold a photograph of their late brother, Balbir Singh Sodhi, who was shot and killed at 52. Since his death, the brothers have been involved in educating others about Sikhism and the discrimination their community faces in the U.S. Mia Warren/StoryCorps hide caption 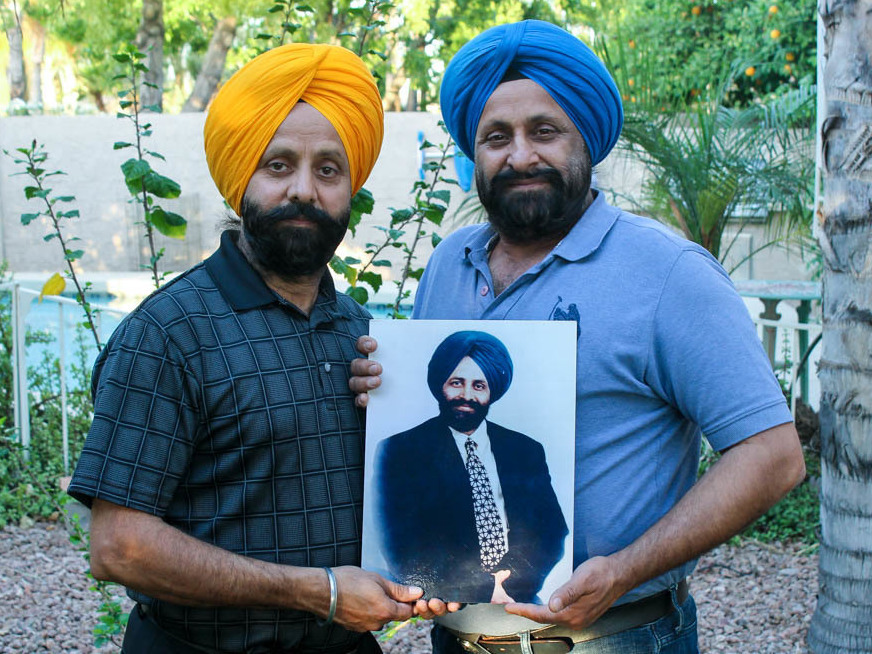 Rana Sodhi (L) and Harjit Sodhi hold a photograph of their late brother, Balbir Singh Sodhi, who was shot and killed at 52. Since his death, the brothers have been involved in educating others about Sikhism and the discrimination their community faces in the U.S.

On Sept. 15, 2001, Balbir Singh Sodhi was outside of the Chevron gas station he owned in Mesa, Ariz., when he was shot and killed.

Balbir was Sikh and wore a turban. In one of the first hate crime murders following the Sept. 11 terrorist attacks, a man, assuming Balbir was Muslim, shot and killed him as retaliation.

'They Thought I Was Dead': A 9/11 Survivor Recalls His Escape

Balbir and his brothers, Harjit Sodhi, who is 57, and Rana Sodhi, who is 51, emigrated from India in the 1980s, and they owned the Chevron together. At a StoryCorps interview, Harjit and Rana remember their brother as friendly and loving.

"I saw he gave ... free candies to children, free drinks. And some people, they [don't] have enough money, he said, 'Pay me tomorrow,' " Harjit said.

"When Sept. 11 happened, Balbir called me and told me 'Turn on the TV because our country get attacked'," Rana said. Harjit also recalled his brother saying he would like to donate his blood in order to help out. On the morning of the day he died, Balbir donated the contents of his wallet to the victims of the attacks.

Despite that Balbir's character was well known in his community, Rana said attitudes towards his brother and other Sikhs drastically changed following the Sept. 11 attacks.

Why American Sikhs Think They Need A Publicity Campaign

Long Before They Were 'Apparent Muslims,' Sikhs Were Targeted In U.S.

He remembers images of Osama Bin Laden on TV. "People saw only a turban and a beard," Rana said. "People yell to us using F-word and asking to 'Go back to your country.' "

The brothers said that neighbors warned them to careful.

"People said, 'Can you take your turban off?', Harjit said.

"Somebody took my best person, my best brother," Harjit said.

Rana found comfort in knowing that his brother was loved.

About 3,000 people attended Balbir's funeral. Many from the U.S. Sikh community were there, as were religious leaders from around the country and several elected officials, including Janet Napolitano, who was then Arizona's attorney general.

Balbir's killer, Frank Roque, also shot at people who were of Middle Eastern descent that day. Convicted of the first-degree murder of Balbir, Roque was sentenced to death in 2003, but he successfully appealed and is now serving a life sentence. With the support of a family friend, Rana spoke with Roque by phone, "and he say that if he die and go to the God, [the] only thing he want to do is see my brother and say sorry to him," Rana said.

"Balbir's death teach us love and peace, and I decided this is my mission of my life," Rana said.