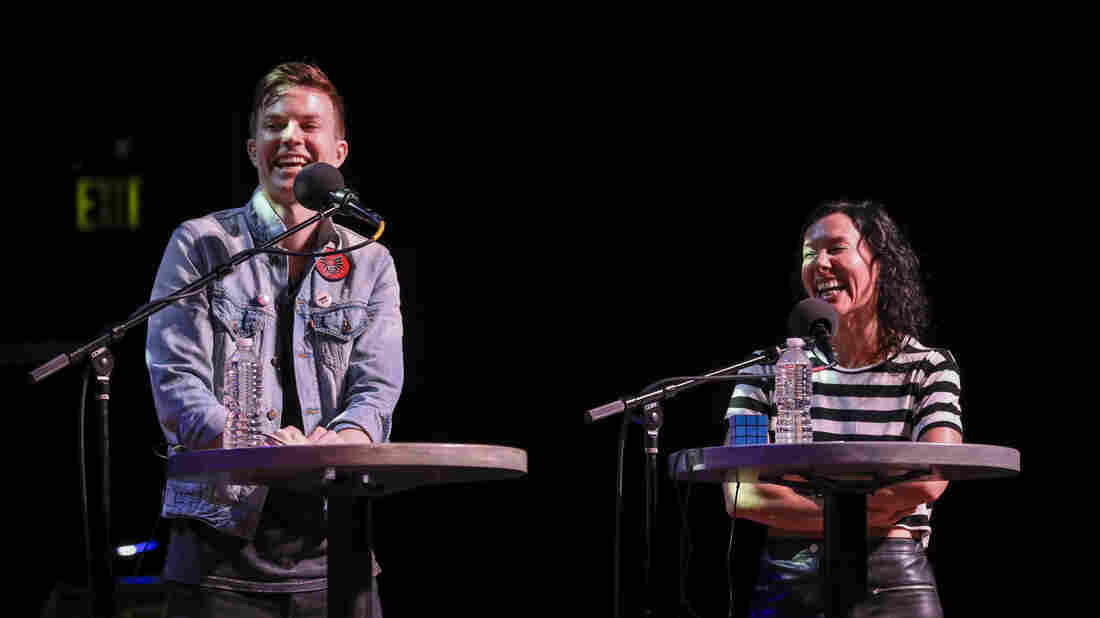 Indie pop duo Matt and Kim appear on Ask Me Another at the Pageant in St. Louis, Missouri. Mike Katzif/NPR hide caption

Before they were Matt and Kim, the pop duo known for ecstatic live shows and inventive music videos, they were Kim Schifino and Matt Johnson, two art students at the Pratt Institute in New York. At The Pageant in St. Louis, Missouri, NPR's Ask Me Another host Ophira Eisenberg asked which came first: Matt and Kim the couple, or Matt and Kim the band? "The doing it came first," Johnson said.

Schifino said developing the musical side of her relationship with Johnson was more accidental than planned. "I went to a show and I was watching the drummer, and I was like 'That looks fun, I want to do that.'" Schifino recalled. "So a friend gave me a hand-me-down set and I was just kind of messing around in the bedroom, and Matt had this keyboard he wanted to figure out."

Matt and Kim's first show was in the basement of an art gallery, in front of a group of friends. That's not the only way they stayed true to their art school roots. Johnson and Schifino joked that, as art students, they learned that getting naked always helps — something they applied when filming the VMA-winning music video for "Lessons Learned," in which they stripped naked in Times Square.

While the duo released its debut album in 2006, it was "Daylight," a breakout single from Matt and Kim's 2009 album, Grand, where the two found greater notoriety and won over their now-devoted fanbase. Since then, Matt and Kim released four more studio albums.

However, this year's album, Almost Everyday, represents a departure from the pair's notoriously cheery tone. Johnson explained that recent events, including Schifino tearing her ACL onstage in Mexico last year, influenced this shift. "I do think we made a much more personal and real album," he said. "Not just the injury but of everything that happened last year, politically... I was just not willing to write 'Daylight' again."

Still, for all their musical and personal chemistry, Matt and Kim don't agree on everything. Where Johnson loves nature, Schifino fears it, especially after outrunning a mile-wide tornado while driving through Missouri on tour. The duo showed off their survival skills by going head to head in a game called "How To Go Outside And Not Die."

Heard on Matt And Kim: How To Go Outside And Not Die.