Accessibility links
Mexico City Keeps Sinking As Its Water Supply Wastes Away "We are depleting volumes of water that took hundreds, thousands of years to store. Sooner or later it will run out," says Mexico City's outgoing water system director. 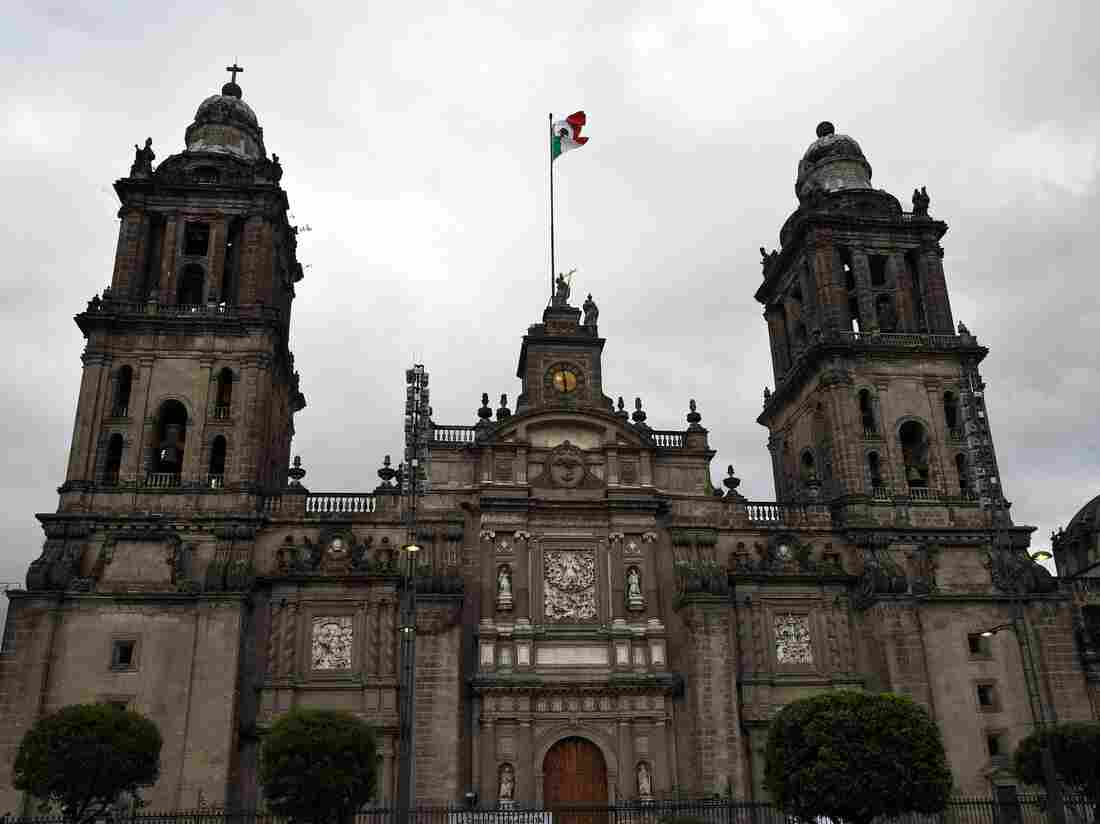 The Mexico City Metropolitan Cathedral in Zócalo Plaza has had to undergo repeated repairs. It is among the many structures in the Mexican capital that are sinking. Alfredo Estrella/AFP/Getty Images hide caption 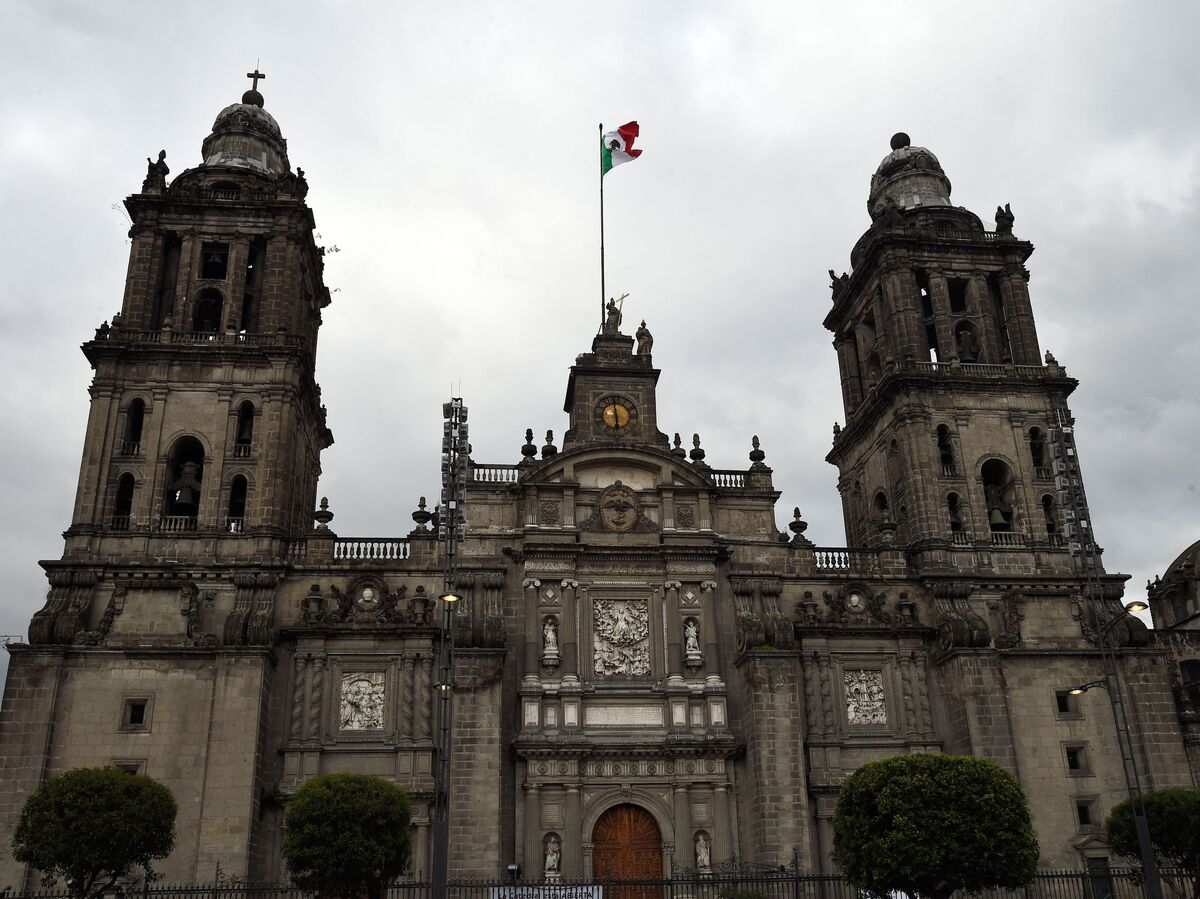 The Mexico City Metropolitan Cathedral in Zócalo Plaza has had to undergo repeated repairs. It is among the many structures in the Mexican capital that are sinking.

It's the rainy season now in Mexico. Between May and September, on most late afternoons, thick clouds roll into Mexico City's mountain-ringed valley. The skies darken and then an amazing downpour ensues.

Despite the rainfall, for five months of the year, many of the metropolitan area's more than 20 million residents don't have enough water to drink. Nearly all that rainwater runs off the streets and highways into the city's massive drainage system built to stave off perennial flooding.

Drinking water increasingly comes from a vast aquifer under the metropolis. And as that water table drops, the city sinks.

So why put a capital city more than 7,000 feet above sea level, in a mountain-ringed valley, that fills like a plugged-up bathtub when it rains?

"It's a historic mistake the city has had to pay for more than 500 years," says Ramón Aguirre Díaz, who has run Mexico City's municipal water system for more than a decade.

The ancient Aztecs first picked the spot. They built their city atop the huge lakes that filled this valley, leaving the natural freshwater supply intact around them. The city flooded back then too, but the Aztecs, probably the last civilization to properly manage this watershed, built a system of dikes to control the problem.

The "historic mistake" kicked in around the 1600s, when Hernándo Cortés and his band of conquerors arrived. To make room for their expanding empire, over a few hundred years, they slowly but surely drained all the valley's lakes.

By the 20th century, long after Mexico's independence from Spain, the fresh surface water was mostly gone and the hunt for new sources had taken over. Hundreds of miles of pipes now bring in about 30 percent of the city's water needs from faraway rivers and lakes. The rest comes from the valley's vast underground aquifer.

Today, Aguirre says, twice as much water is pumped out as is put back in.

"We are depleting volumes of water that took hundreds, thousands of years to store. Sooner or later it will run out," he says.

When exactly that is, no one really knows. But for those living in the poorer eastern stretches of the city, like 52-year-old Marco Marquez, it feels like now.

During the rainy season, Marquez gets about an hour of water a day. His little patio is crammed with different sizes of storage containers filled with water. During the dry season, he can go two, even three months without water. He says sometimes the government will send in a water tanker truck, known as a pipa, which literally means pipe.

"The quality of the water the government provides is really bad quality, it's disgusting," he says. "You can only use it to flush the toilets or wash the sidewalk."

Marquez says sometimes he and some neighbors pool their money to buy a private pipa with water from better wells.

He needs clean water to run his fresh fruit stand. He has named the small storefront, run out of a street-facing room in his house, the Oasis. 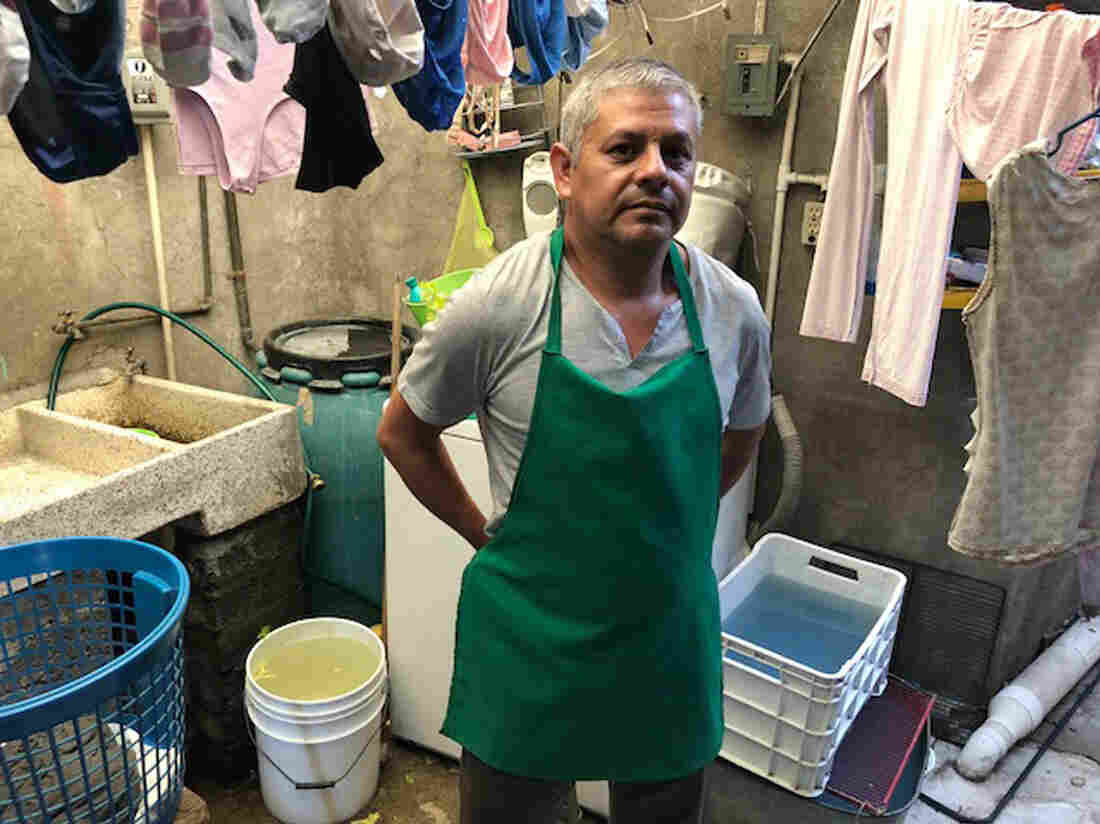 Marco Marquez, 52, keeps storage containers filled with water on his patio. The tap runs dry on a regular basis, but he needs clean water especially for his fruit business. Carrie Kahn/NPR hide caption 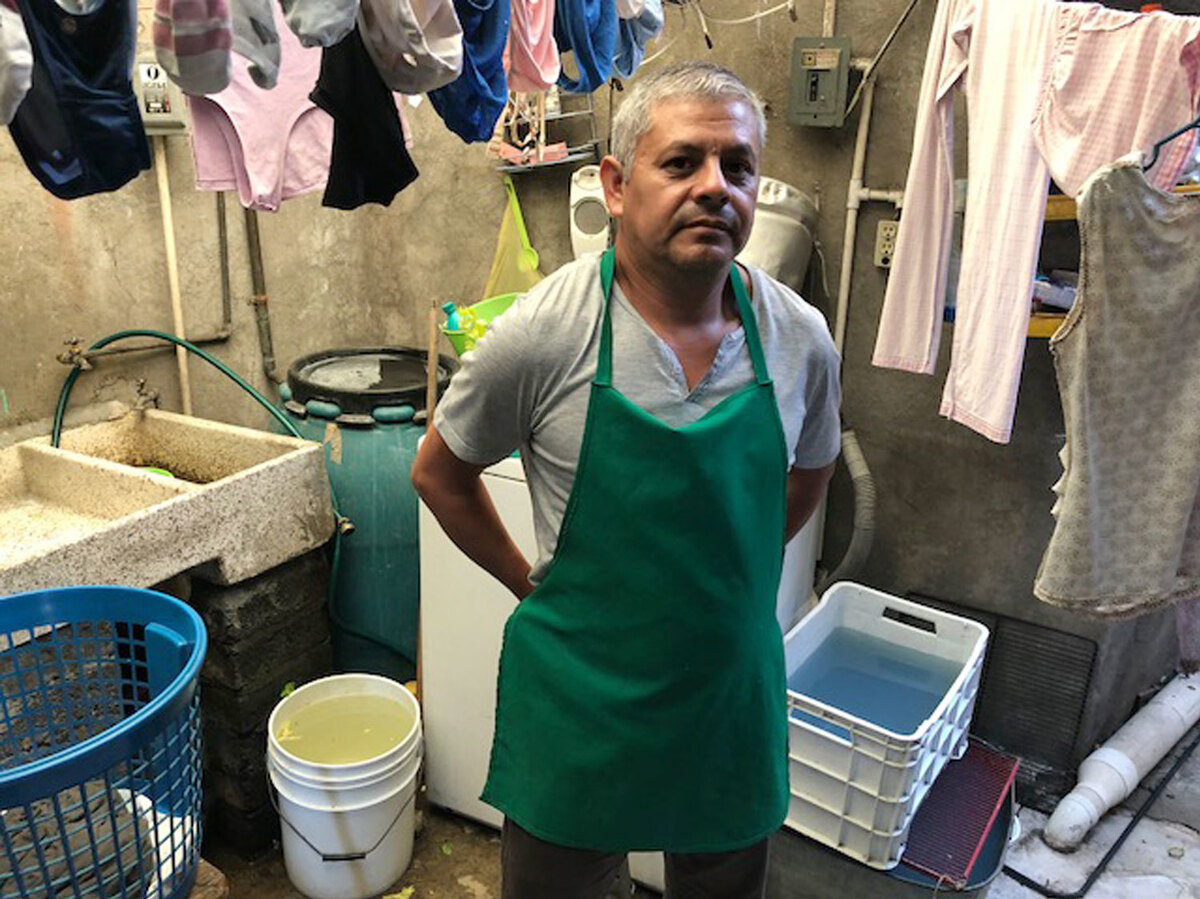 Marco Marquez, 52, keeps storage containers filled with water on his patio. The tap runs dry on a regular basis, but he needs clean water especially for his fruit business.

The city's underground pipes, half of which are at least 60 years old, fail at an alarming rate. It could take at least 50 years, and hundreds of millions of dollars, to replace all the old, ruptured pipes, according to one official estimate.

That means the water tankers are in high demand.

Twenty-two-year-old Juan Flores stands on top of a 2,600-gallon tanker. He guides a huge hose connected to a pipe pumping water directly out of the aquifer into the truck.

"I'll take this to fill up tanks at schools and hospitals around this district," which borders Mexico City's airport, he says.

In many ways sending trucks all over the sprawling capital is a more efficient system than the city's pipes, which are so prone to breaks and leaks that nearly 40 percent of the drinking water running through them is just wasted, according to a government study in 2010.

That inefficiency, along with urban sprawl and hotter weather due to climate change, has put even more demand on the overused aquifer. And as the water table drops, so do many parts of the city — by as much as 15 inches in a year in some areas.

As the ground sinks, it leaves buildings tilting — most notably, the iconic cathedral in Mexico City's historical center — as well as roadways breaking apart and pipes rupturing or buckling backward.

María Estella Isla, 42, is on her patio, where she has just started a load of laundry. She hasn't had water in days, so she has to fill her washing machine with water she scoops out of a big blue plastic storage barrel. 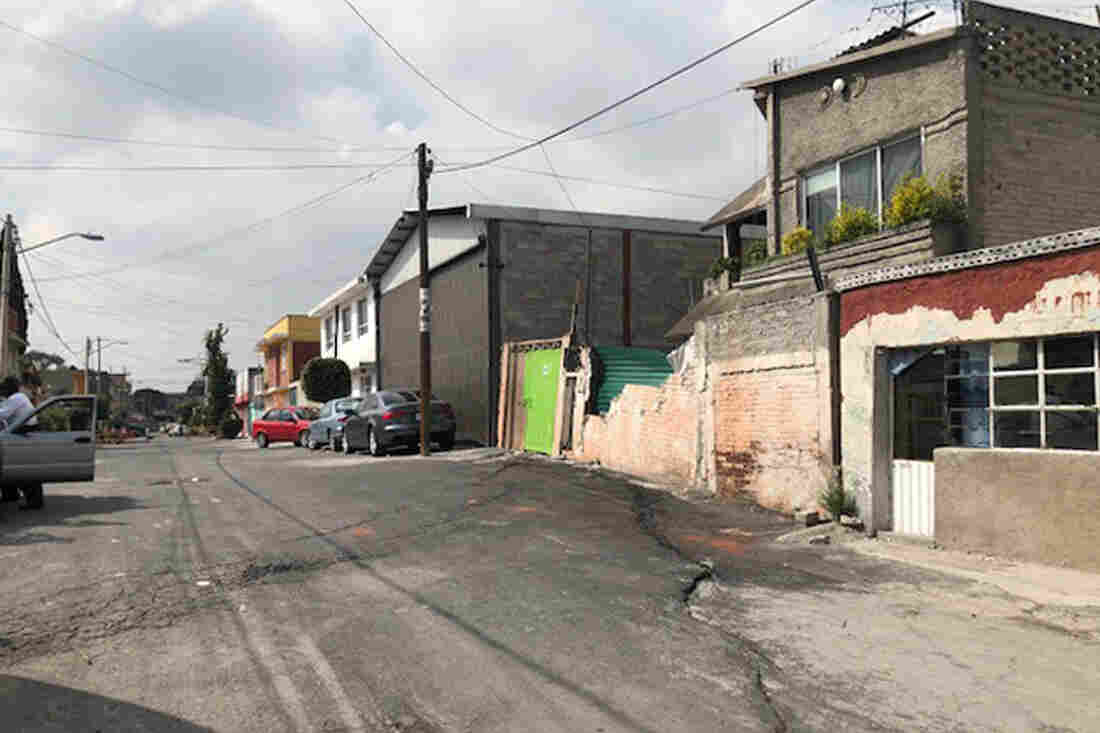 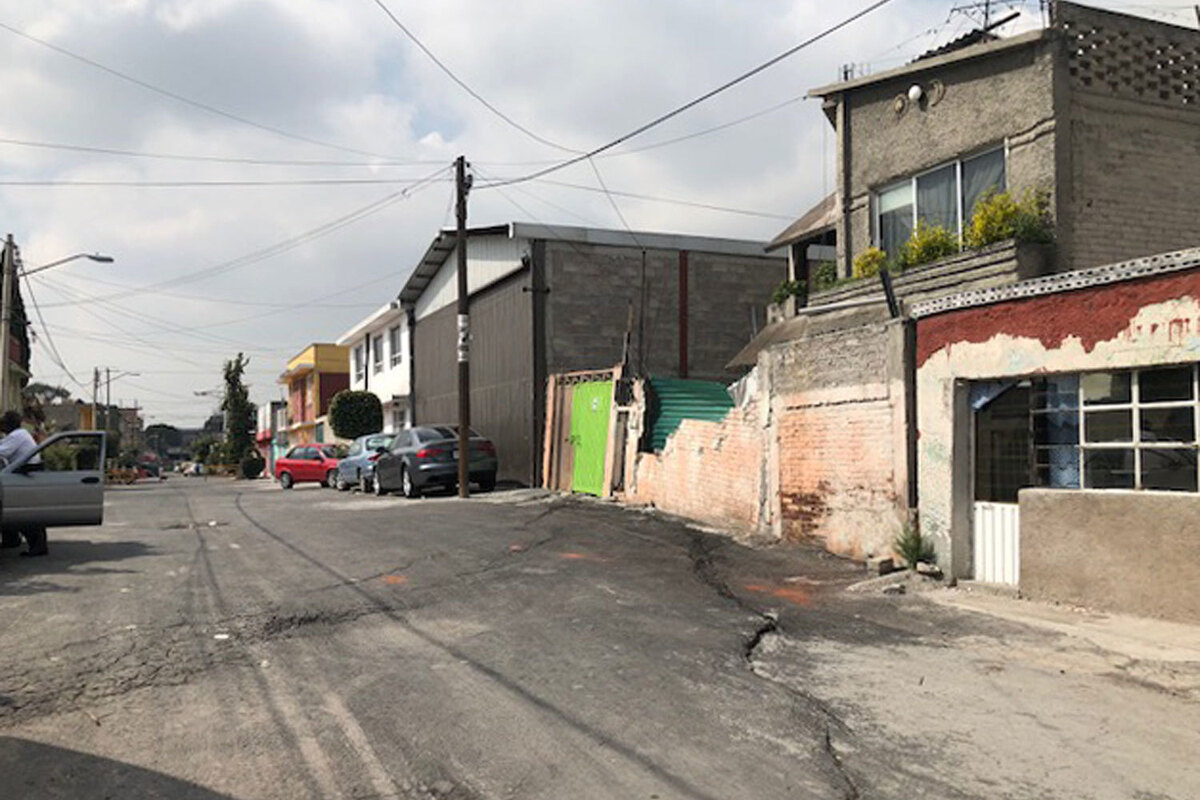 A large crack cuts through this Mexico City street. Half of the street is lower than the other half, one of many signs this metropolis is sinking.

"Just look at my patio — it's full of cracks," she says. A large fissure in the ground runs right through her property, out the gate and down the street. One half of the block has sunk. It's at least a foot lower than the other side. The underground sewer line connected to her house now tilts upward and floods her patio, especially on rainy days.

Since last century, Mexico City has spent billions of dollars on flood control. A major tunnel project launched almost a decade ago has been plagued with delays and enormous cost overruns, with a budget now topping $2 billion. It is not helping the city's water shortage or sinking problems. The system moves rainwater and sewage out of the city quickly, but little is recycled or used to recharge the aquifer.

Anthropologist Dean Chahim, a Ph.D. candidate at Stanford, is studying Mexico City's water woes. He says water managers must find a more balanced approach to the city's water supply to rely less on groundwater. There is a need for more water recycling, rainwater catchment and recharging of the aquifer. Many of these are being done, but on a very small scale.

"And we have to redistribute the water. At the end of the day, it can't be that people in one part of the city [the richer neighborhoods] are drinking 400 liters [106 gallons] a day and others [the poorest] are drinking 40 [11]," says Chahim.

The World Health Organization says a person needs between 50 and 100 liters of water a day (13 and 26 gallons) to meet basic needs.

Water administrator Aguirre says there have been a multitude of studies and solution recommendations.

He says what's needed now is the political will, and more money, to make changes.

"The city won't make it to the 22nd century if we don't resolve [the water problems] soon," says Aguirre, who leaves office at the end of November.

Mayor-elect Claudia Sheinbaum, a University of California, Berkeley-educated scientist, says getting more reliable water supplies to more people in the city is one of her top priorities.

Last week, she said she will inject an additional 7 billion pesos (about $370 million) to the annual budget for Mexico City's water department, about a 50 percent boost over this year.

Sheinbaum said on Twitter she will work to bring more water to more people.

Millions of residents are counting on her.