Accessibility links
Tropical Storm Florence, 'An Uninvited Brute,' Brings Floods, And At Least 5 Deaths Hundreds of thousands of customers in North Carolina and South Carolina are without power. One N.C. official warned that part of the state will see "between a 500-year and 1,000-year flood event."

Tropical Storm Florence is still a slow-moving giant that poses danger to people in North and South Carolina, as its storm surge and intense rains bring high floodwaters to towns both on the coast and inland.

The storm has been linked to at least five deaths, a toll that is expected to climb.

At 5 a.m. Saturday, the storm was moving toward the west-southwest at about 5 mph and sustained winds had decreased to around 50 mph. Water levels could reach between 2 and 5 feet above ground in parts of North and South Carolina, the National Weather Service said.

The storm's center was located about 35 miles west of Myrtle Beach, S.C., and 45 miles south-southeast of Florence, S.C.

Florence is expected to turn toward the north and go through the Ohio Valley by Monday, according to the weather service.

On Friday, a woman and infant were killed in Wilmington, N.C., when a tree fell on their home, according to the local police department. Another victim of the storm — a 78-year-old man — died in North Carolina while plugging in a generator, the state's governor says.

A second man, 77, in Lenoir County, appears to have been killed by a gust of wind that knocked him to the ground when he was checking on his hunting dogs.

In Hampstead, N.C., a woman had a heart attack and debris in the roads prevented emergency responders from reaching her to provide care, a dispatcher confirms to member station WUNC.

Florence has dumped at least 16 inches of rain over southeastern North Carolina since making landfall near Wrightsville Beach at 7:15 a.m. ET.

The storm moved at only 3 to 6 mph on Friday, increasing the effect of its torrential rains.

"We know we're in for a long haul here," Cooper said of predictions that the storm will linger all weekend. "But I think we're ready."

Why They Chose To Stay In The Path Of Hurricane Florence

White House press secretary Sarah Sanders said Friday that President Trump "is expected to travel to areas affected by the storm early to middle of next week, once it is determined his travel will not disrupt any rescue or recovery efforts."

In New Bern, N.C., rescuers have pulled more than 100 people from their homes to safer ground. Dana Outlaw, the town's mayor, told NPR's All Things Considered in the late afternoon that there had been 1,200 requests to 911 over the previous 12 hours. 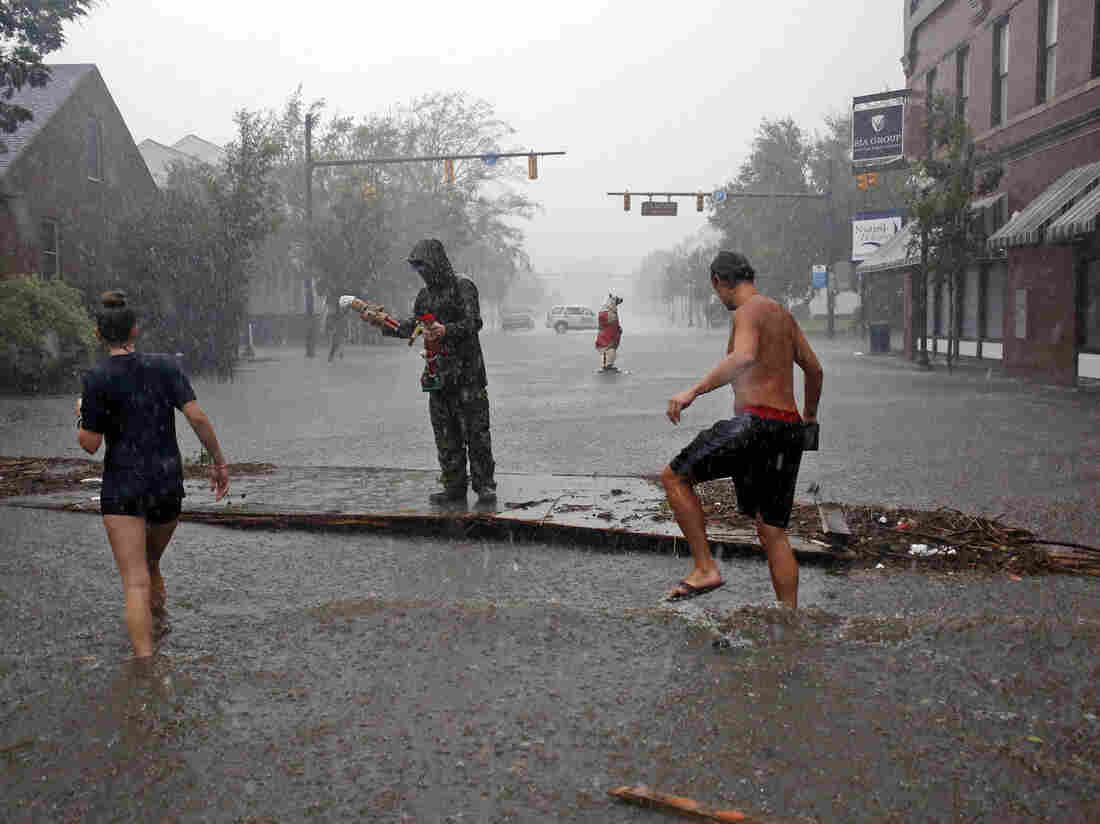 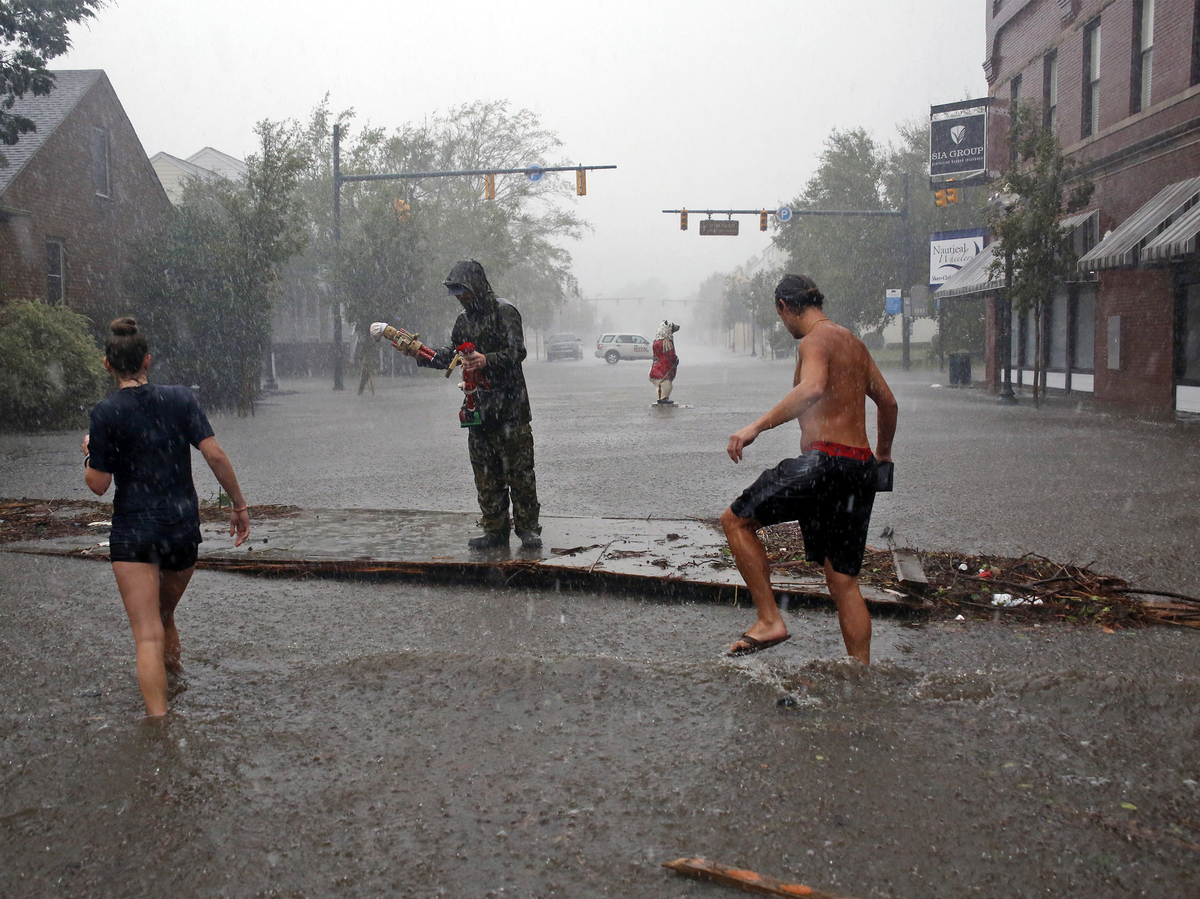 New Bern sits between the Neuse and Trent rivers, which quickly overflowed even before Florence made landfall. On Friday morning, nearly every street in the downtown area was flooded, sending some of the signature bear statues that are normally bolted to the ground floating down city streets.

Some of our beloved bears have wandered off. These statues, which New Bern is known for, are extremely heavy & bolted down at sponsoring businesses. This one ended up in the middle of S. Front St! pic.twitter.com/jvCohJiesY

"We went door to door. Our policemen, our firemen drove firetrucks with PA systems" warning people about the imminent danger of the storm, he said. The city also sent out recreation department buses "and urged residents to get in the bus and go to a shelter."

But despite mandatory evacuation orders, many residents stayed home.

"New Bern has gotten a free pass quite a few times that what we thought was going to be a terrible storm did not happen. This time it did. Unfortunately, this is kind of a wake-up call that these things do happen," Outlaw told NPR.

Along the coast, floodwaters have been hitting inland towns near rivers that normally discharge into the ocean. But with a storm surge putting pressure on water to head back inland and heavy rains swelling those rivers, widespread flooding is the result. As Cooper said, "There's nowhere for the water to go."

In the evening, North Carolina Emergency Management instructed people to stay off the roads.

"It's starting to get dark, and #HurricaneFlorence is still causing power outages, heavy rainfall and hazardous wind conditions. If possible, avoid venturing out of your home. Flooded roads are deadly. Never drive past barricades or through standing water," the agency tweeted.

It's starting to get dark, and #HurricaneFlorence is still causing power outages, heavy rainfall and hazardous wind conditions. If possible, avoid venturing out of your home. Flooded roads are deadly. Never drive past barricades or through standing water. #FlorenceNC pic.twitter.com/eQE6nn2Kfv

The agency also warned private well users to beware of the possibility of contaminated water, and warned people to wait until the flooding is over to restart their pumps.

#FlorenceNC If you have a private well, do not turn on the electricity to your pump until flood waters recede. If extensive flooding has occurred, do not drink the water. Use your water reserves and bottled water until you well water has been tested.

Some evacuation shelters have been forced to close after losing power, the University of North Carolina-Chapel Hill reported. Campus administration is collaborating with the Red Cross and Gov. Cooper's office to establish new shelters to house people displaced by the hurricane.

The No. 1 mission right now, Cooper said, is to save lives.

"We've rescued over 100 people in New Bern, N.C.; people from Jacksonville, N.C., had to rescued from a hotel," Cooper said, describing efforts to save people in towns north of Wilmington where high floods have already hit. 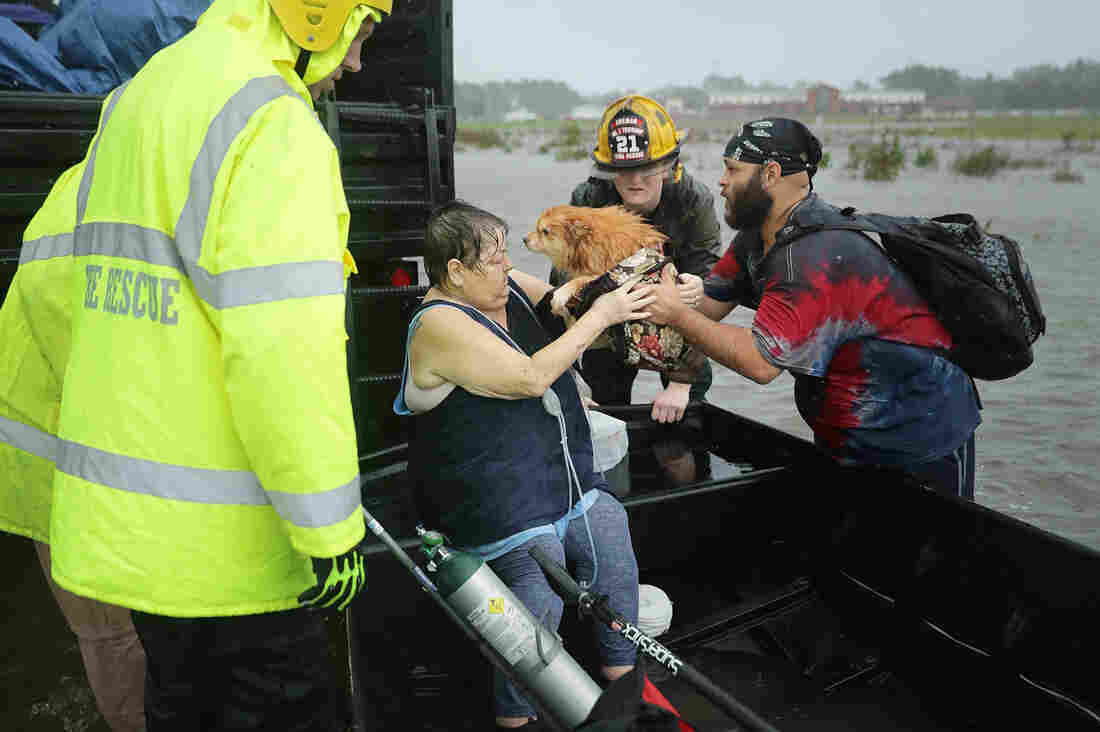 Rescue workers from Township No. 7 Fire Department and volunteers from the Civilian Crisis Response Team help rescue a woman and her dog from their flooded home during Hurricane Florence on Friday in James City, N.C. Chip Somodevilla/Getty Images hide caption 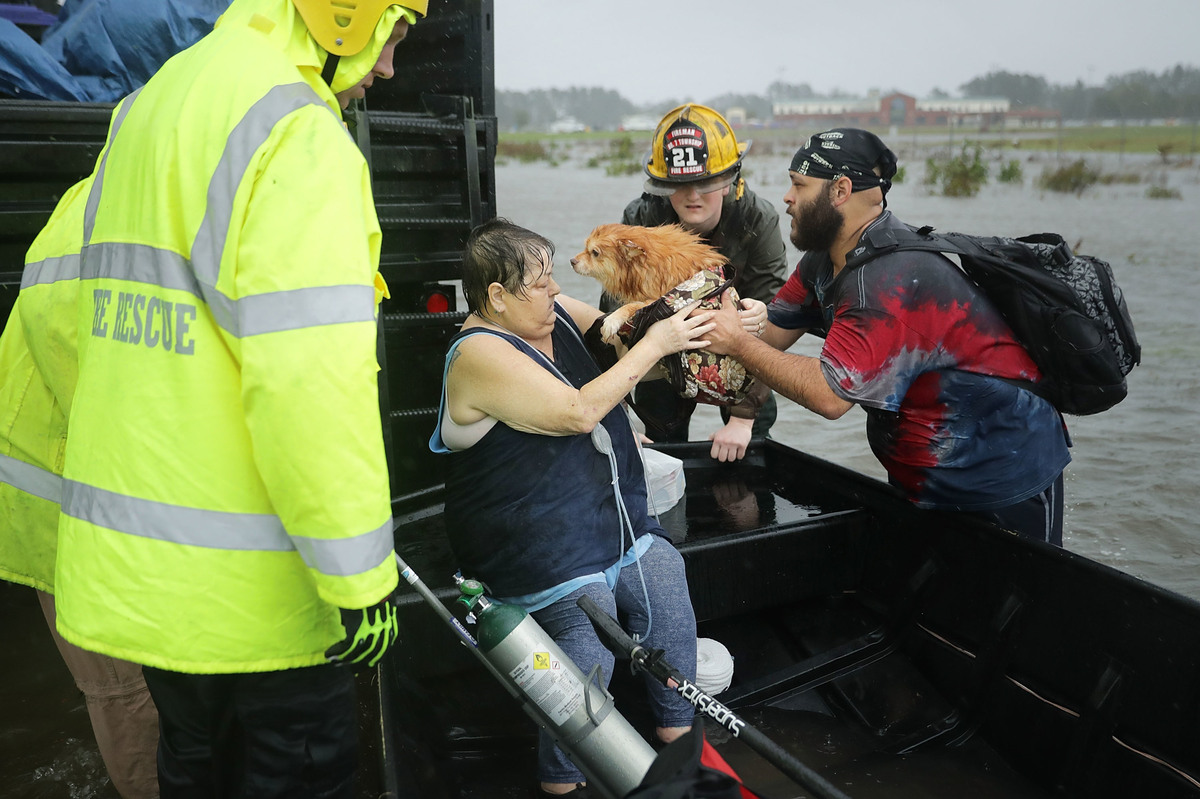 Rescue workers from Township No. 7 Fire Department and volunteers from the Civilian Crisis Response Team help rescue a woman and her dog from their flooded home during Hurricane Florence on Friday in James City, N.C.

The storm has caused more than 770,000 power outages in North Carolina, with more than 150,000 reported in South Carolina, according to website poweroutage.us.

As the power outages spread, federal authorities are warning of the risks of carbon monoxide poisoning, emphasizing that generators and grills should never be used indoors.

Florence's eyewall reached shore near Wilmington, N.C., just before 6 a.m. ET Friday; more than an hour later, the National Hurricane Center announced, it had "finally" made landfall near Wrightsville Beach.

The news came more than 10 hours after the storm began punishing the coastal area with sustained hurricane-force winds, the hurricane center said.

In New Bern, Sarah Risty-Davis is one of the residents who opted not to follow a mandatory evacuation order that was issued three days ago.

"We had pretty high floodwaters up until the early morning hours," Risty-Davis tells NPR's Morning Edition. "I'm not sure if it's a shift in the wind or low tide — but the water has miraculously disappeared."

There's still a threat from rising tides, Risty-Davis says. And she has seen reports of people fleeing to rooftops to escape high floodwaters.

Still, she said, "I think we're going to stay put," noting her neighborhood's past success in avoiding power outages and flooding.

The storm surge that has hit New Bern is "approximately 2 feet higher" now than it was during Hurricane Irene seven years ago, the National Weather Service office in Morehead City says. The agency adds that people trapped by flooding should "never enter attics or crawl spaces."

At the Wilmington airport, the wind was measured at 105 mph — the highest since 1958, Cooper said. 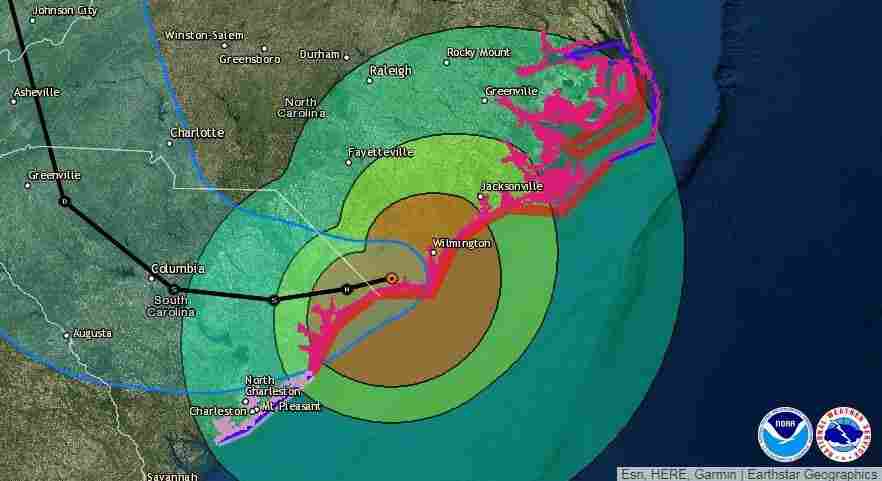 After creeping inland, Florence is expected to head west across South Carolina before looping up toward Tennessee and Kentucky early next week. NOAA/NWS, Esri, HERE, Garmin, Earthstar Geographics hide caption 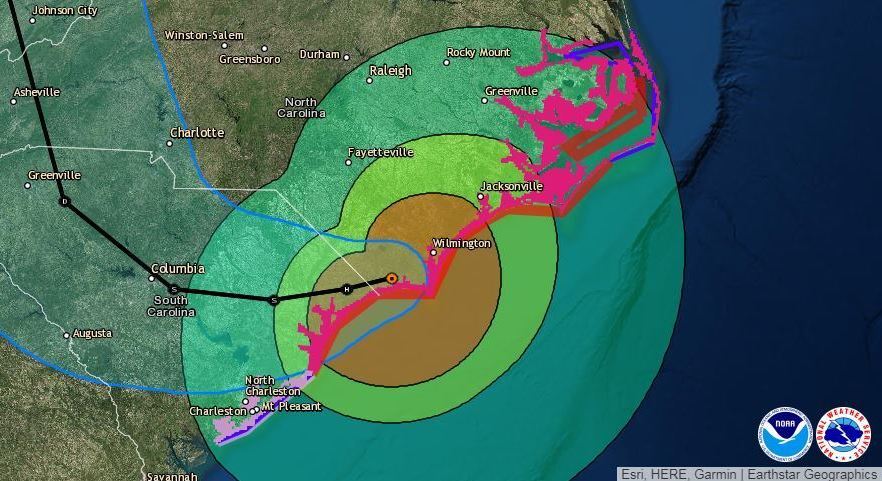 After creeping inland, Florence is expected to head west across South Carolina before looping up toward Tennessee and Kentucky early next week.

Florence arrived at the Carolina coast as a Category 1 storm, its 90-mph winds far slower than the fearsome 150 mph of just a few days ago. "Rapid weakening [is] forecast over the weekend," the hurricane center said.

But forecasters say Florence's biggest threat, as with all hurricanes, lies in its water: a storm surge of up to 11 feet and rainfall that will trigger catastrophic flooding.

Town of @HillsboroughGov had a landmark knocked over. The fallen red oak, one of the largest trees in town and thought to be over 200 years old, blocked Calvin Street and took out power lines but did not cause injuries or damage houses. pic.twitter.com/s3Ao1lqiXu

As it moves inland, the storm is expected to bring its high winds and intense rain bands across the southeastern corner of North Carolina and a large chunk of South Carolina. Rainfall of up to 20 to 40 inches could fall over the next several days in some areas, forecasters say. 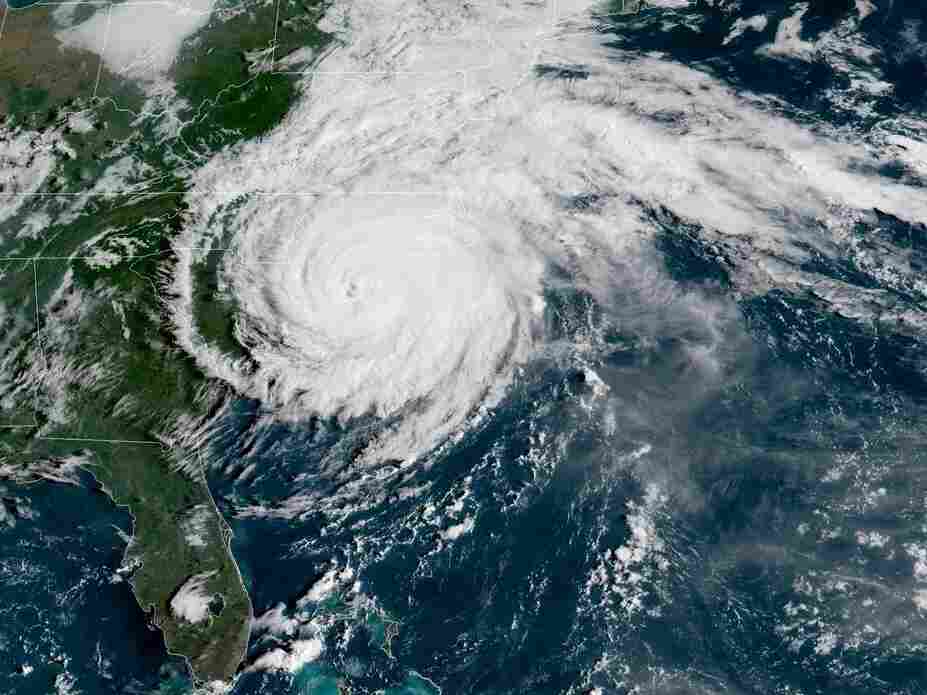 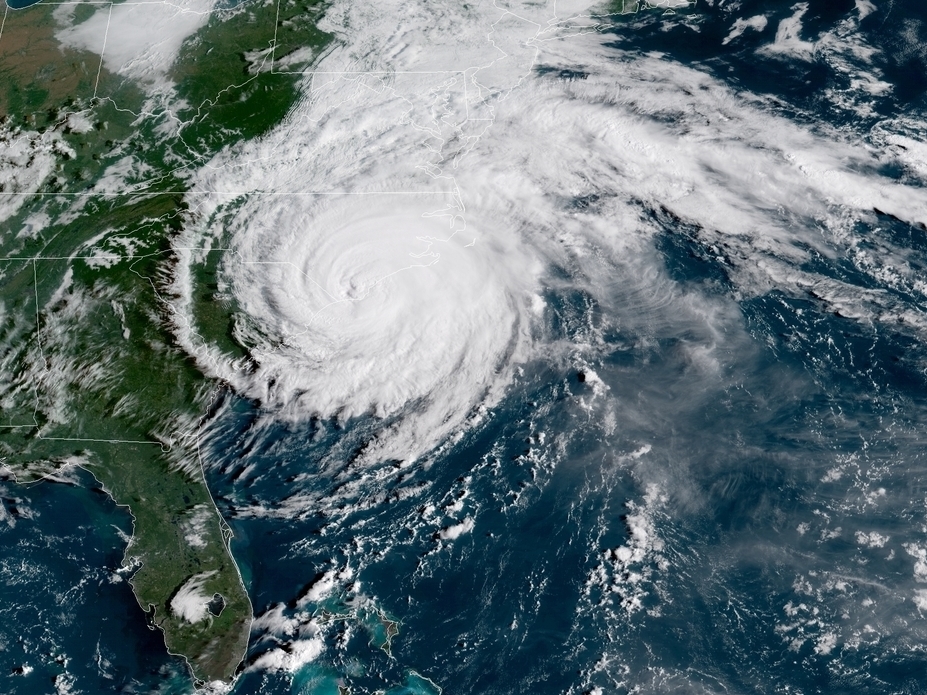 To prepare for this storm, businesses boarded up, and supplies were readied for what is expected to be a large-scale relief operation. States of emergency were declared in both North and South Carolina. Thousands of soldiers from their National Guard forces have been mobilized.

This landfall has been a long time coming: The hurricane arrived more than two weeks after the National Hurricane Center issued its first advisory for the storm. That advisory came out on Aug. 30, when Florence was developing near the Cabo Verde Islands across the Atlantic. Its designation then was "potential tropical cyclone six."