Accessibility links
San Francisco Removes Statue Of Native Man At Feet Of Colonizers The statue, called Early Days, showed a Native American gazing up at a vaquero, or Spanish cowboy, and a proselytizing priest. Native groups have long called for the sculpture's removal. 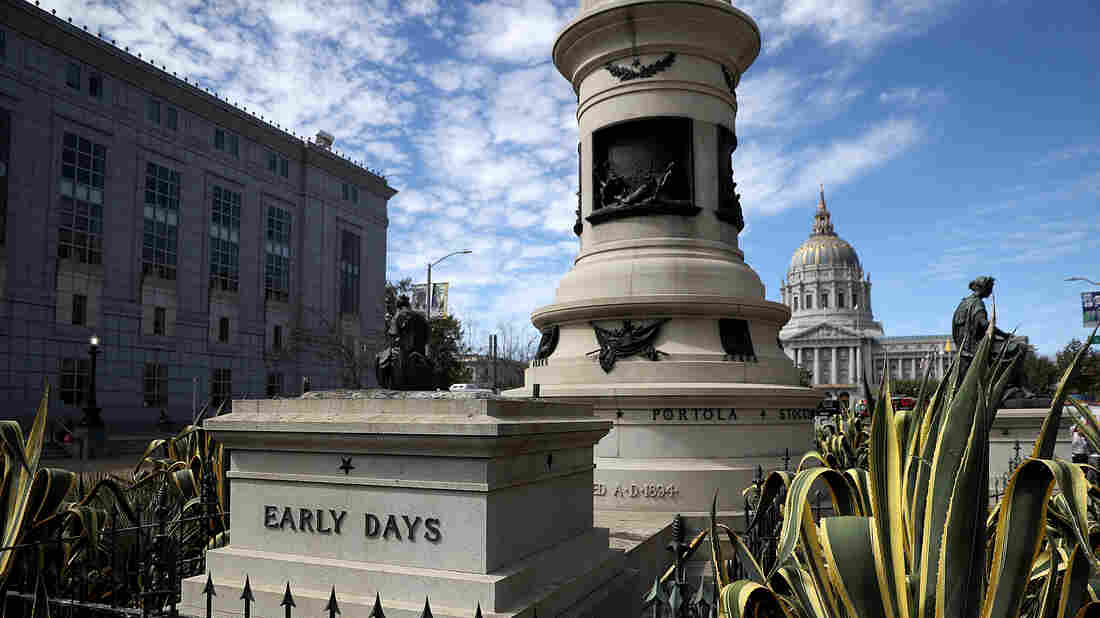 An empty pedestal remains where a statue known as Early Days, which depicted a Native American at the feet of a Catholic missionary and Spanish cowboy, used to stand on Fulton Street in San Francisco. The statue was removed early Friday morning. Justin Sullivan/Getty Images hide caption 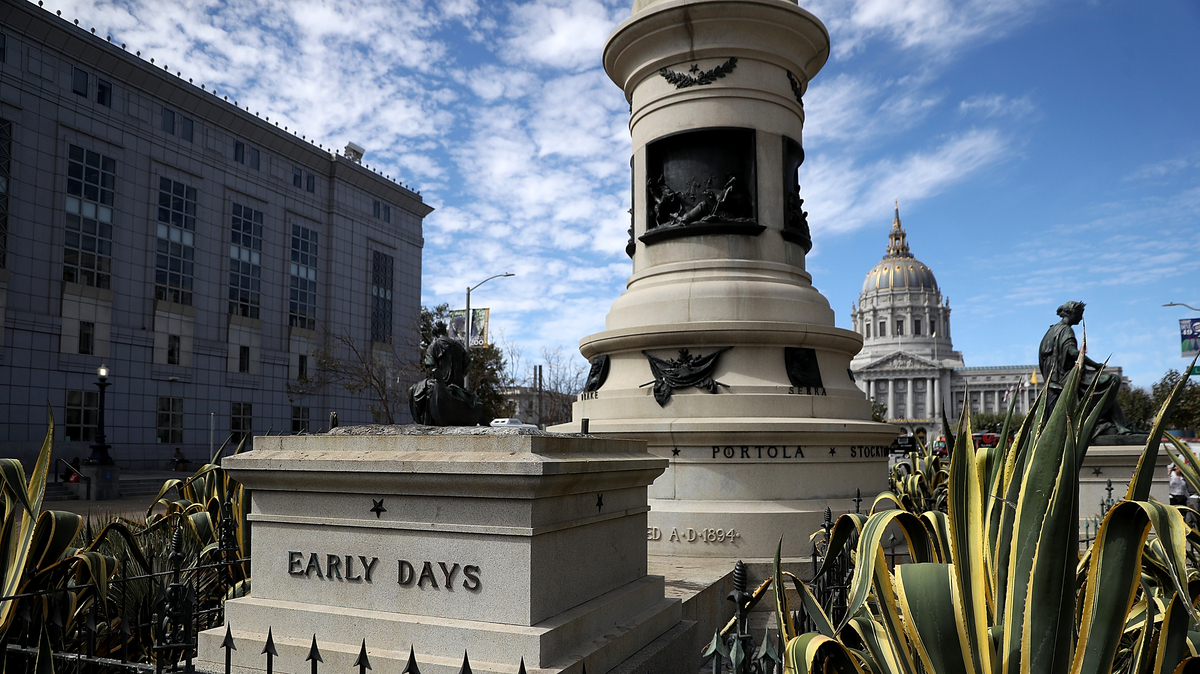 An empty pedestal remains where a statue known as Early Days, which depicted a Native American at the feet of a Catholic missionary and Spanish cowboy, used to stand on Fulton Street in San Francisco. The statue was removed early Friday morning.

In the pre-dawn darkness on Friday morning, work crews removed a controversial statue from San Francisco's Civic Center Plaza, after the city's arts commission unanimously voted to take down the "racist and disrespectful sculpture."

The statue depicts "the degradation and genocide of Native American peoples" using stereotypes that "are now universally viewed as disrespectful, misleading, and racist," the arts commission said in February.

Dozens of people watched and celebrated the removal of the statue, which showed a Native American man on the ground, gazing up toward conquering European figures.

"The 2,000-pound statue offered little resistance as a crane hoisted it from its pedestal and gingerly placed it on a flatbed truck around 5:30 a.m," Dominic Fracassa of the San Francisco Chronicle writes. "Those who gathered to watch, mostly American Indians, softly sang traditional songs and burned bundles of sage." 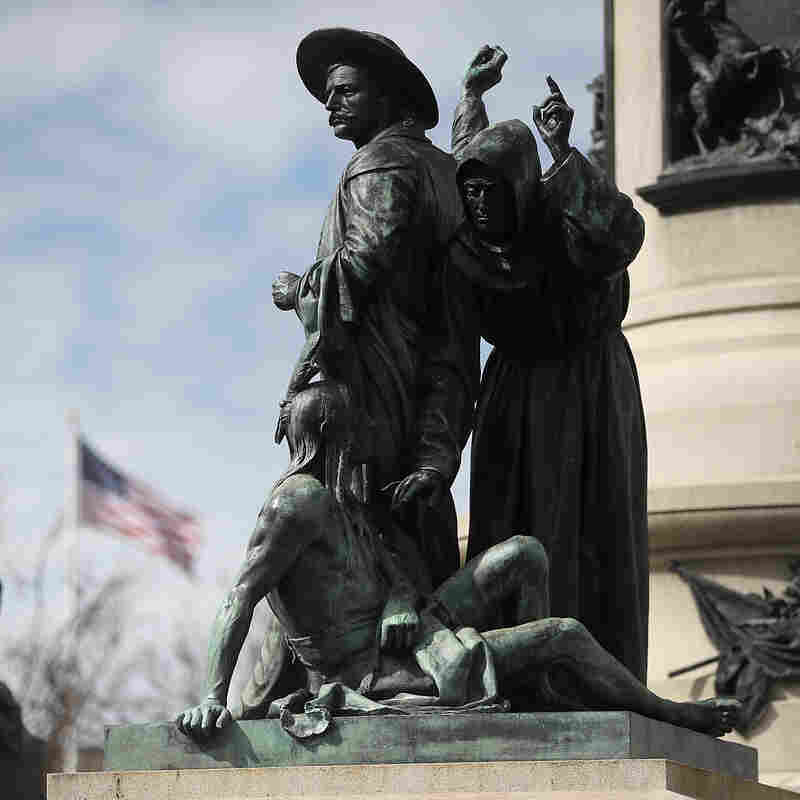 The Pioneer Monument was dedicated in 1894. "Early Days," pictured on March 12, was one of several statues featured in the monument. Justin Sullivan/Getty Images hide caption 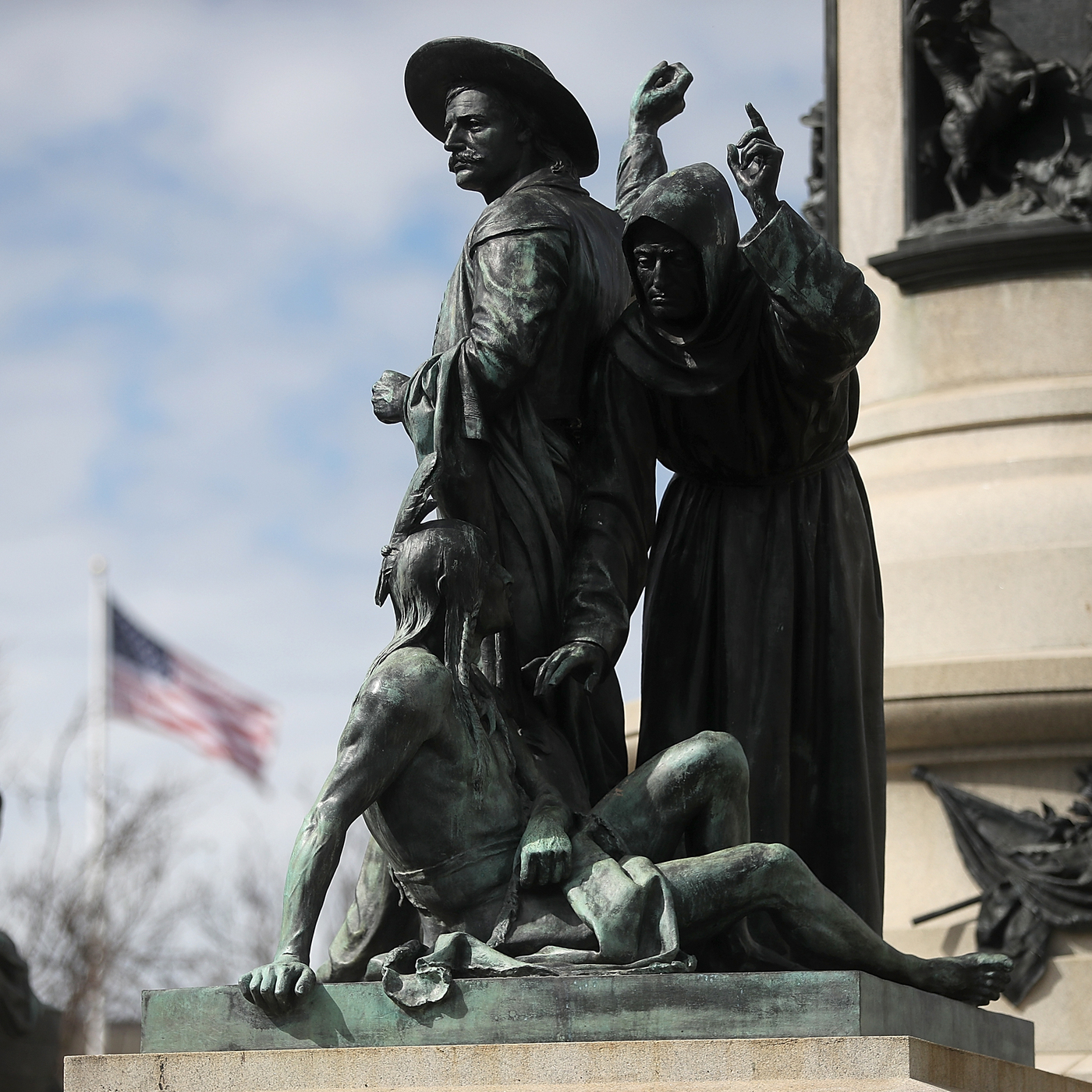 The Pioneer Monument was dedicated in 1894. "Early Days," pictured on March 12, was one of several statues featured in the monument.

The city's Historic Preservation Commission had also unanimously approved the statue's removal, provided it was replaced with a plaque explaining what was there and why it was removed.

Kate Patterson, a spokeswoman for the San Francisco Arts Commission, says adding a plaque like that is the next step in the process.

The sculpture was part of San Francisco's Pioneer Monument, which was dedicated in the late 19th century.

Early Days shows a Native American man lying at the feet of a vaquero, or Spanish cowboy, and a priest. The vaquero, in a heroic pose, has his back turned to the Native man. The priest is looking down at the fallen man and pointing one hand up to the sky.

The Native American in the statue is "not even a California Indian," Patterson told NPR. "For those who argue that it represents history, it's a very inaccurate representation."

As member station KQED reports, the statue has long been controversial:

"Efforts to remove "Early Days," which critics call degrading and historically inaccurate, began decades ago and renewed last year amid a national movement against Confederate statues and other racist monuments. "We should not have the statue in Civic Center any more than we should have a statue of Robert E. Lee," former Mayor Ed Lee said in 2017.

"Flyers headlined "TEAR DOWN WHITE SUPREMACY" invited locals to voice their objections at the hearing, and dozens of speakers, most of them Native American, decried the statue during public comment. They pointed out that it erroneously depicts a Plains Indian, and invoked the systematic genocide and cultural repression visited upon Native Americans by Europeans—a legacy they said the statue celebrates and carries forward.

" 'I'm not asking you to destroy it,' said District 5 Supervisor Vallie Brown. 'I'm asking you to take it and bury it somewhere deep in the basement where...no one has to see it.' "

After some initial success, that appeal ultimately failed, and the statue was removed on Friday.

The statue will be placed in fine arts storage, and will be undergoing restoration, Patterson tells NPR.