Accessibility links
Census Citizenship Question Trial Could Start Day Before Midterm Elections A federal judge in New York has set Nov. 5 as the start date of the first potential trial of the six lawsuits over the 2020 census citizenship question that dozens of states and cities want removed. 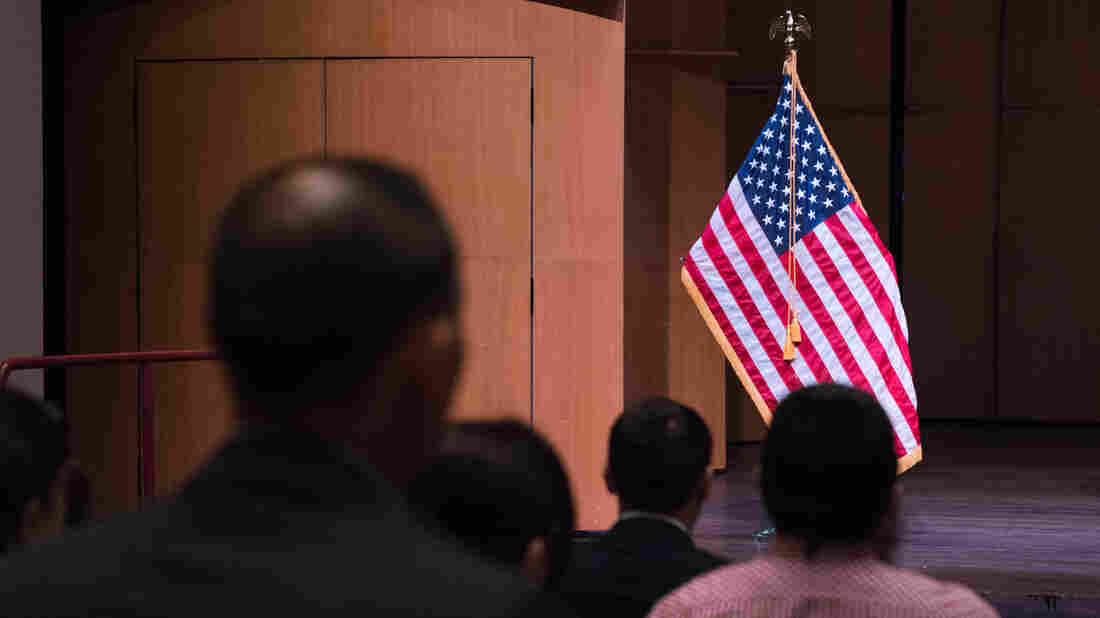 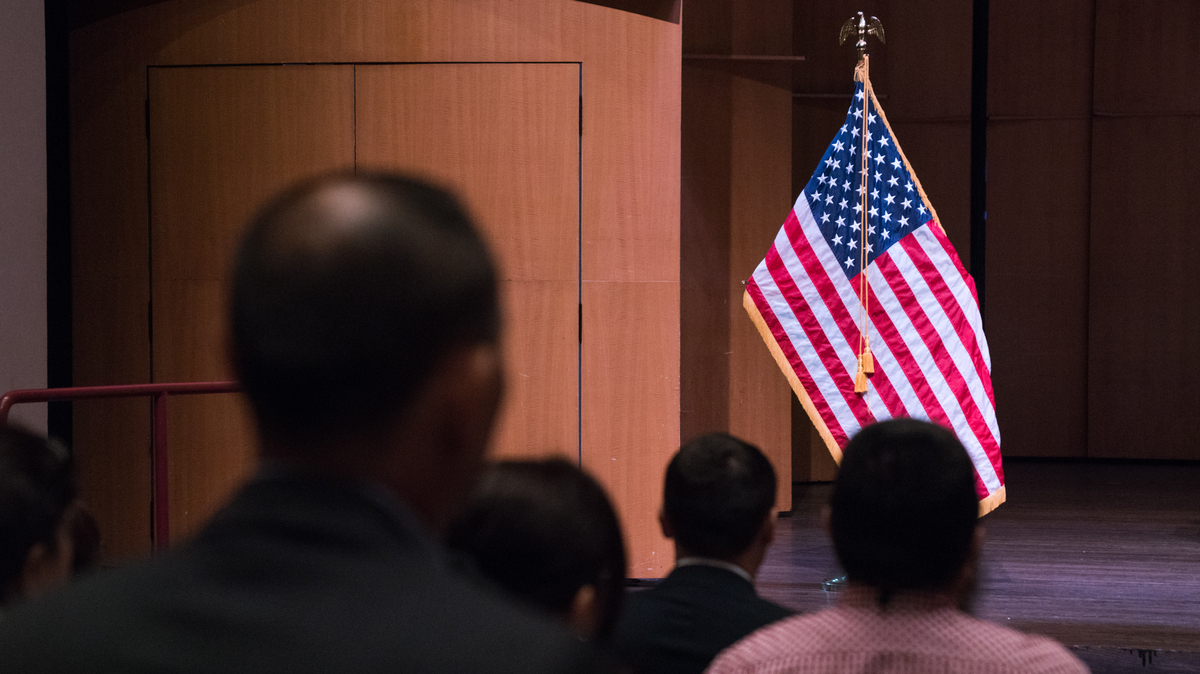 Newly sworn-in U.S. citizens gather for a naturalization ceremony in Alexandria, Va., in August. A potential trial over a new 2020 census citizenship question is set to start on Nov. 5 in New York City.

The first potential trial of the six lawsuits over the hotly contested 2020 census citizenship question could kick off the day before voters head to the polls for the upcoming midterm elections.

During a court hearing at Manhattan federal court on Friday, U.S. District Judge Jesse Furman set the tentative start date for Nov. 5, adding that his "strong instinct" is that the two cases before him require a courtroom trial before he can issue a ruling.

Potential trials for the two cases in California and one of the Maryland cases are set to start in January. Rulings by the district court judges are expected to be appealed to higher courts. That could extend this legal battle into the final months of preparations for the 2020 census.

New York and more than two dozen states and cities, plus other groups, are suing the Census Bureau and the Commerce Department, which oversees the bureau, over Commerce Secretary Wilbur Ross' decision in March to add a question about U.S. citizenship status to forms for the upcoming national headcount.

Ross has said he approved adding the question — which asks, "Is this person a citizen of the United States?" — so that the Justice Department can use the responses to better enforce the Voting Rights Act's Section 2 provisions against discrimination of racial and language minorities. The federal government has relied on estimates of voting-age citizens from a sample survey now known as the American Community Survey to enforce that civil rights law since it was enacted in 1965.

The Census Bureau's chief scientist and other researchers have warned against adding the citizenship question to the census. They cite research that suggests asking about citizenship status in the current political climate of anti-immigrant rhetoric and increased immigration enforcement under the Trump administration could discourage noncitizens from participating in the census.

Findings from focus groups conducted for the 2020 census marketing campaign by the advertising agency Young & Rubicam indicate the question could complicate the Census Bureau's outreach to certain groups. A slide for an internal bureau presentation that was released Thursday with one of the plaintiffs' court filings noted: "A number of focus group participants responded negatively to adding the citizenship question, most notably Spanish (U.S. mainland) as well as Vietnamese, Chinese, [Native Hawaiian and Other Pacific Islander], and members of the female [Middle Eastern or North African] group."

The Constitution requires the government to conduct a once-in-a-decade head count of every person living in country — regardless of citizenship status — in order to produce population numbers used to redistribute congressional seats and Electoral College votes among the states.

The plaintiffs want the question about citizenship status — which has not been among the census questions for all U.S. households since 1950 — removed to avoid a potential undercount of people living in households with noncitizens, including unauthorized immigrants. That would affect how an estimated $800 billion a year in federal funds are distributed based on population counts.

During Friday's hearing, Justice Department attorney Kate Bailey said the Trump administration does not want to go to trial because it believes the administration has already disclosed "more than ample information" for Judge Furman to issue a ruling.

Over the past three months, the Trump administration has released thousands of pages of internal emails, memos and other documents to explain Ross' decision to add the question. Officials from the Census Bureau and the Commerce Department have also faced hours of questioning by the plaintiffs' attorneys.

Elena Goldstein, an attorney from the New York state attorney general's office, pushed back during Friday's hearing, calling a trial the "most efficient and logical way to go" given the differences between the plaintiffs' and the Trump administration's stances on the citizenship question's impact and why Ross added it to the 2020 census.

Judge Furman said he was "skeptical" of skipping a trial to go to summary judgment, but he is open to reviewing the Trump administration's argument to do so.

The release of more documents

The hearing did not resolve whether two key Trump administration officials involved with the citizenship question will be deposed for the lawsuits.

The 2nd U.S. Circuit Court of Appeals is reviewing the administration's request to block the deposition of John Gore, the acting head of the Justice Department's civil rights division. That division allegedly needs the citizenship question responses for Voting Rights Act enforcement. Justice Department attorneys say they're prepared to ask the higher court to block a deposition of Ross, which the plaintiffs have asked Furman to allow.

On Friday, Furman did rule that the Trump administration must release unredacted versions of previously-released internal documents that, he said, "go to the heart" of why Ross decided to add the citizenship question. Those documents are due to the plaintiffs by Monday.