Accessibility links
At Least 14 Dead In Carolinas And 'The Worst Flooding Is Yet To Come' In Some Areas Florence is now a tropical depression, but major flooding will continue, the National Weather Service says. At least 14 people have died in the storm and its aftermath. That number's expected to rise.

Florence weakened to a tropical depression Sunday morning, the National Hurricane Center said, but flooding continued to be a major danger throughout the Carolinas.

North Carolina Gov. Roy Cooper said the storm is more dangerous now than when it made landfall. "Flood waters are still raging across parts of our state, and the risk to life is rising with the angry waters," Cooper said in a news conference on Sunday.

In its 5 a.m. update, the agency said the storm was moving west and had picked up a little speed to 8 mph with sustained winds of 35 mph.

The storm's death toll climbed to 14 on Saturday, a number that's expected to rise.

The worst flooding is yet to come for portions of the Carolinas, the southern/central Appalachians from western NC to west-central VA and far eastern WV.
In addition to flash & long-term river flooding will be the threat of landslides
Latest on #Florence: https://t.co/3AVeVDQvkg pic.twitter.com/6qFrnbO7o8

"The worst flooding is yet to come for portions of the Carolinas, the southern/central Appalachians from western NC to west-central VA and far eastern WV," the National Weather Service said on Twitter late Saturday.

The storm is currently about 20 miles southwest of Columbia, S.C. "On the forecast track, Florence's center will move across the western Carolinas today and then recurve over the Ohio Valley and Northeast U.S. Monday and Tuesday," the weather service said. 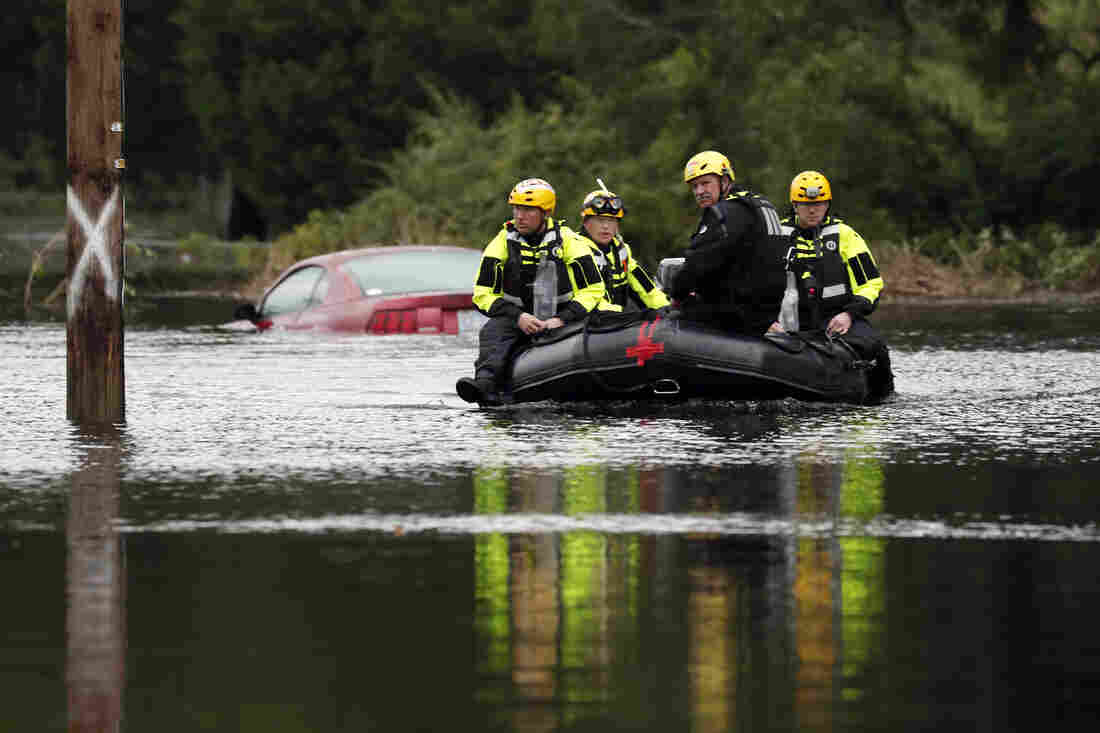 Members of a swift water rescue team check a flooded street caused by the tropical storm Florence in New Bern, N.C., on Saturday. Rescuers have pulled more than 200 people from their homes to safer ground as of Saturday morning in New Bern. Chris Seward/AP hide caption 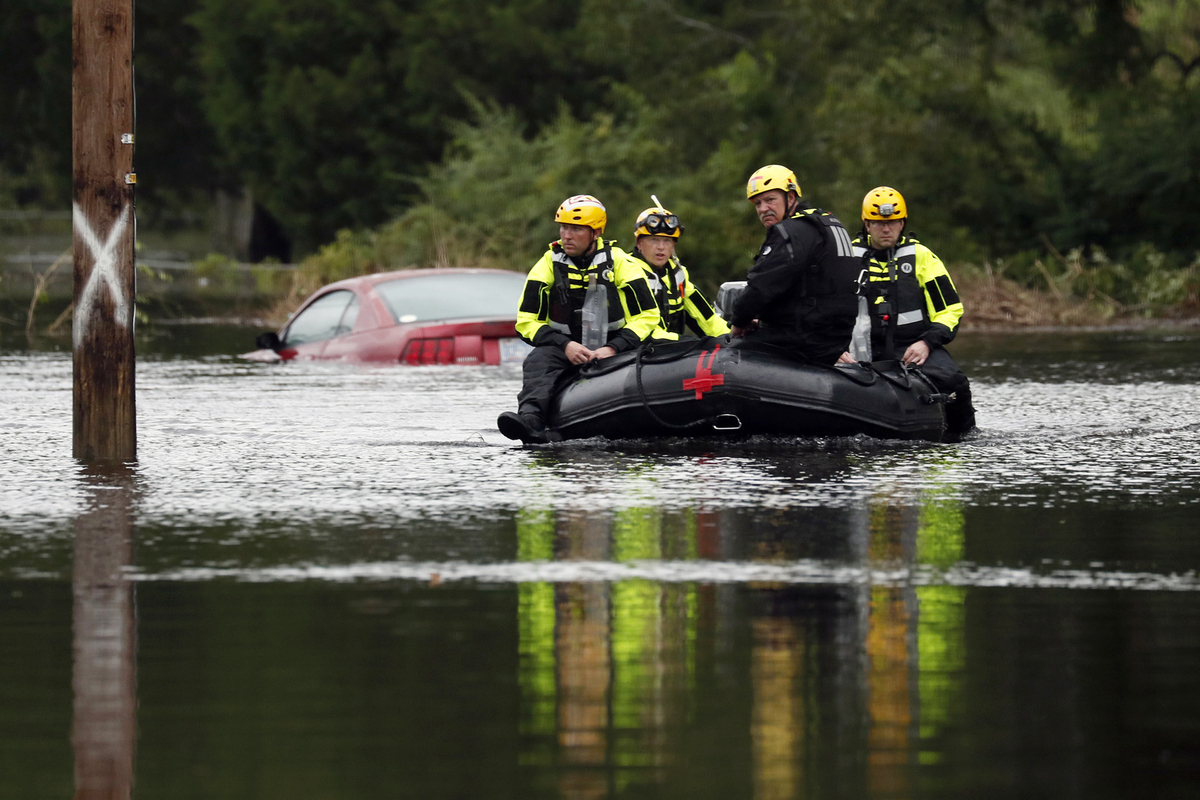 Members of a swift water rescue team check a flooded street caused by the tropical storm Florence in New Bern, N.C., on Saturday. Rescuers have pulled more than 200 people from their homes to safer ground as of Saturday morning in New Bern.

Florence came ashore early Friday morning. As it continued to chug west Saturday, it slowed down from 5 mph to 2 mph. That meant its torrential rains were felt harder.

Rains from the storm have already been relentless, and continue to dump a catastrophic amount of water in its path. A record 30.59 inches of rain hit Swansboro, N.C. by 4 p.m. Saturday. And although "water levels along the coast of North and South Carolina are gradually receding," the National Weather Service said, additional flooding along the coast is still possible on Sunday. 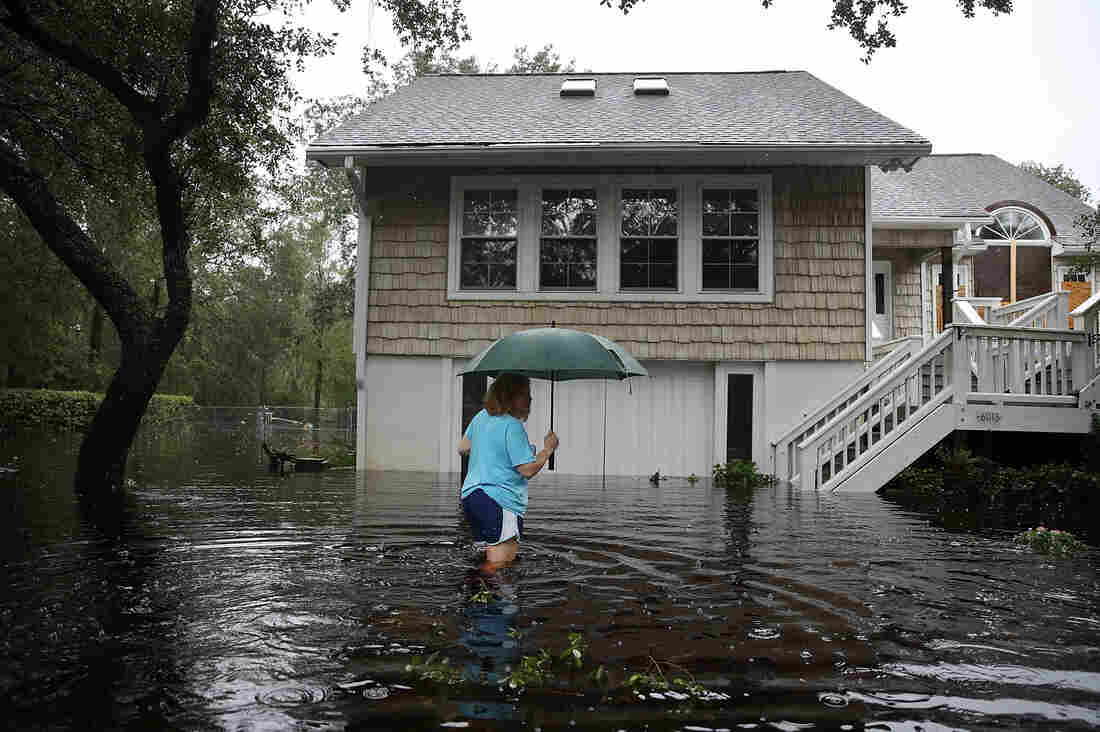 Kim Adams makes her way to her home that is surrounded by floodwaters on Saturday in Southport, N.C. Joe Raedle/Getty Images hide caption 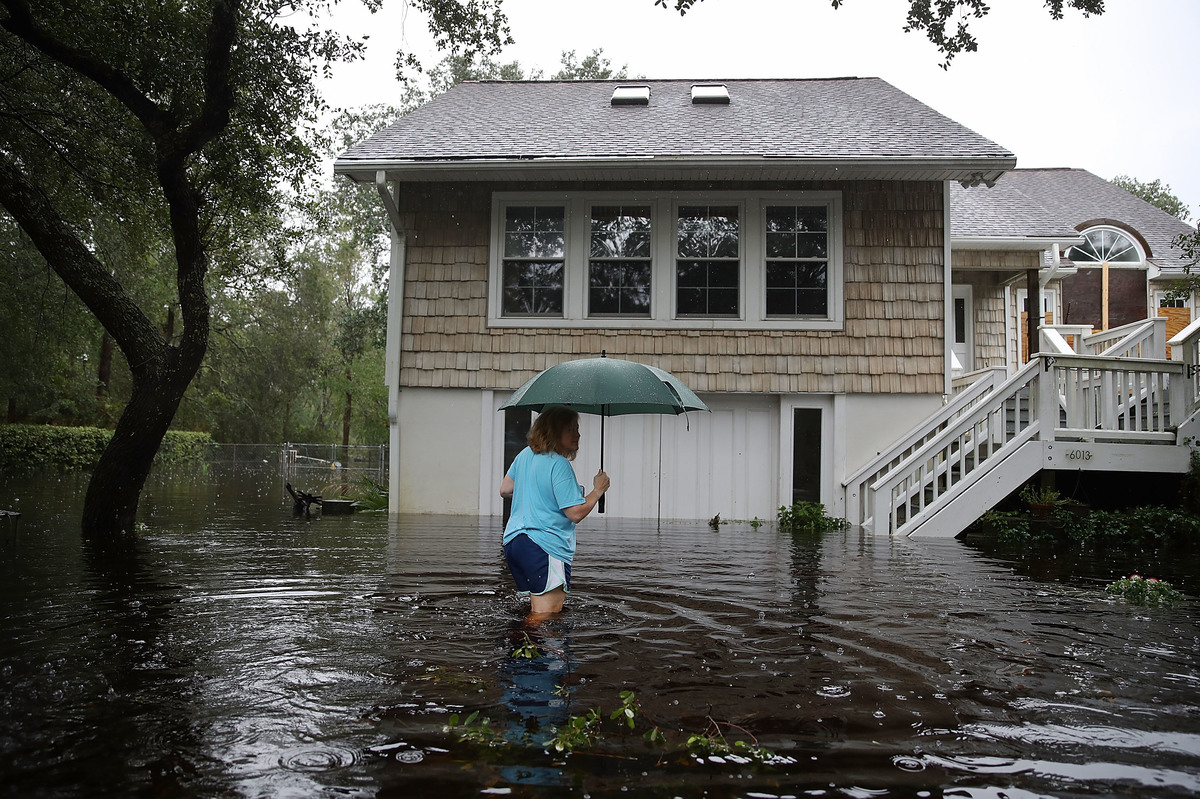 Kim Adams makes her way to her home that is surrounded by floodwaters on Saturday in Southport, N.C.

On Saturday, the agency said southern and central portions of North Carolina into far northeast South Carolina were expected to report an additional 15 to 20 inches of rainfall — with storm totals between 30 and 40 inches along the coastal areas south of Cape Hatteras, N.C.

These rains are expected to produce "prolonged, significant river flooding" according to the NWS. This flooding is the biggest concern in Fayetteville, N.C., Mayor Mitch Colvin told NPR's Michel Martin. The town enacted a mandatory evacuation for areas around the Cape Fear River on Saturday afternoon.

On Saturday morning, residents near the river in Castle Hayne, N.C., were already wading through water to get to their homes. "When it came in, it came in full force," Castle Hayne resident Michelle Mullins told NPR's Greg Allen.

The NWS predicts the Cape Fear River will reach 62 feet on Tuesday, 27 feet above flood stage and well into the zone of "major" flooding.

"Residents should not let their guard down," North Carolina Emergency Management tweeted.

Tropical Storm Florence morning update: Portions of eastern NC have already received 10-25” of rain, with additional heavy rain expected. Some rain bands include rainfall rates of 2-3” per hour leading to dangerous flash flooding. Residents should not let their guard down. pic.twitter.com/9BpNujwseY

The rest of South Carolina into western North Carolina and southwestern Virginia was expected to report 5 to 10 inches of additional rainfall, with 15 inches in some isolated areas.

Parts of west-central Virginia and far eastern West Virginia will see "life-threatening flash flooding and river flooding, along with an elevated risk for landslides," according to the agency. These areas will see 3 to 6 inches of rainfall, with isolated cases of 8 inches.

17 Apps To Help You Get Through The Hurricane

Florence has also generated "life-threatening" swells affecting Bermuda, portions of the U.S. East Coast, and the northwestern and central Bahamas. "These swells are likely to cause life-threatening surf and rip current conditions," the weather service says.

The coroner of Union County, S.C., William Holcombe, confirmed to NPR that 61-year-old Amber Dawn Lee died in a traffic accident. Her vehicle struck a tree that had fallen across a roadway. Officials say the tree fell due to the winds caused by Hurricane Florence. Hers was the first death in South Carolina blamed on the storm. 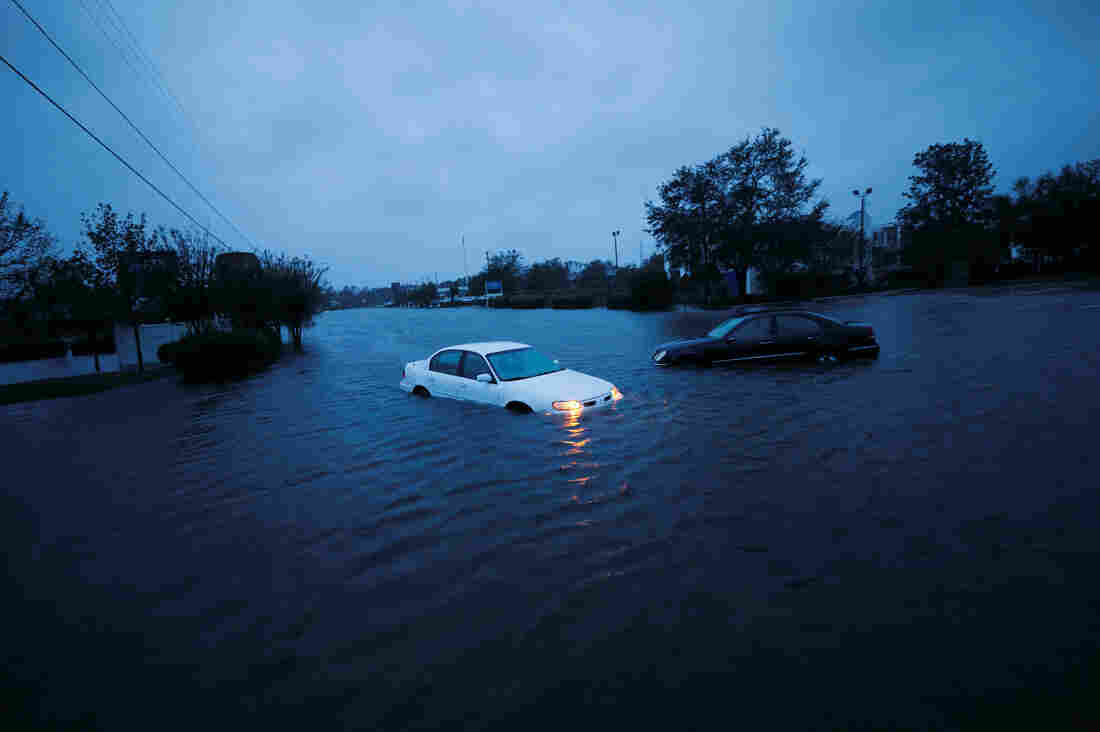 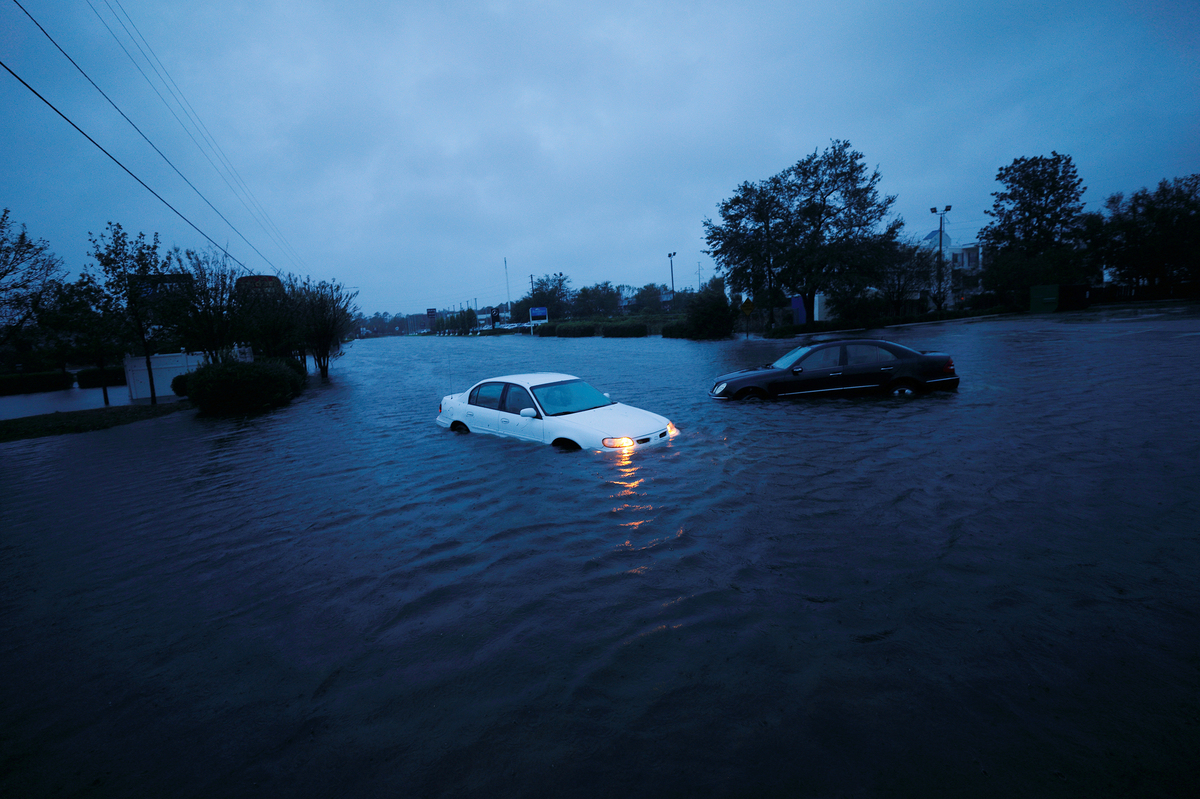 An abandoned car's hazard lights continue to flash as it sits submerged in rising floodwaters on Saturday morning in North Carolina.

In a Facebook post, the sheriff of Duplin County, N.C. says three people died there due to "flash flooding and swift water on roadways."

The state of North Carolina released confirmation of the deaths of a couple in Cumberland County who were killed in a house fire and an 81-year-old man in Wayne County who fell while getting ready to evacuate.

A 61-year-old woman, Debra Collins Rion, and 63-year-old man, Mark Carter King, died Friday night in Longs, S.C. from carbon monoxide poisoning, the Horry County coroner's office confirmed to NPR. They had been using a generator inside their house.

Another person died after a truck lost control on water-logged road in South Carolina, according to The Associated Press.

At least five other deaths are connected to the storm. As NPR reported on Friday:

"On Friday, a woman and infant were killed in Wilmington, N.C., when a tree fell on their home, according to the local police department. Another victim of the storm — a 78-year-old man — died in North Carolina while plugging in a generator, the state's governor says.

"A second man, 77, in Lenoir County, appears to have been killed by a gust of wind that knocked him to the ground when he was checking on his hunting dogs.

"In Hampstead, N.C., a woman had a heart attack and debris in the roads prevented emergency responders from reaching her to provide care, a dispatcher confirms to member station WUNC."

President Trump tweeted about some of the early fatalities on Saturday, saying "Deepest sympathies and warmth go out to the families and friends of victims."

Five deaths have been recorded thus far with regard to hurricane Florence! Deepest sympathies and warmth go out to the families and friends of the victims. May God be with them!

North Carolina's Department of Public Safety lowered its power outage numbers to 680,000 at 5 a.m. Sunday morning, down from outages topping 770,000 earlier in the weekend.

In South Carolina, 57,000 customers were without power as of just after 5 a.m., according to PowerOutage.us.

The organization has rolled out a "rumor-control webpage" to combat misinformation and unfounded rumors. Contrary to some rumors, "all service animals are allowed in shelters," reads one post. "FEMA does not have authority to issue or enforce evacuation orders," reads another.

In New Bern, N.C., a town that sits between two rivers, rescuers pulled more than 100 people from their homes to safer ground as of Friday. Another 69 were rescued on Saturday morning, the city said in a tweet.

Dana Outlaw, the town's mayor, told NPR that there had been 1,200 requests to 911 on Friday in 12 hours. "That's very unusual. ... We did everything we could to make residents aware of how dangerous this storm was going to be," Outlaw said.

NPR's Brakkton Booker reported that much of the town remains under water. Some neighborhoods are only accessible by boat. Some residents stayed despite Tuesday's evacuation order, unable to afford hotels or transport elderly family members.

About 2,800 National Guard members are at work on rescue and recovery efforts in North Carolina. Rescue teams from Texas to Massachusetts — including the famed Cajun Navy — are assisting with efforts across the Carolinas. 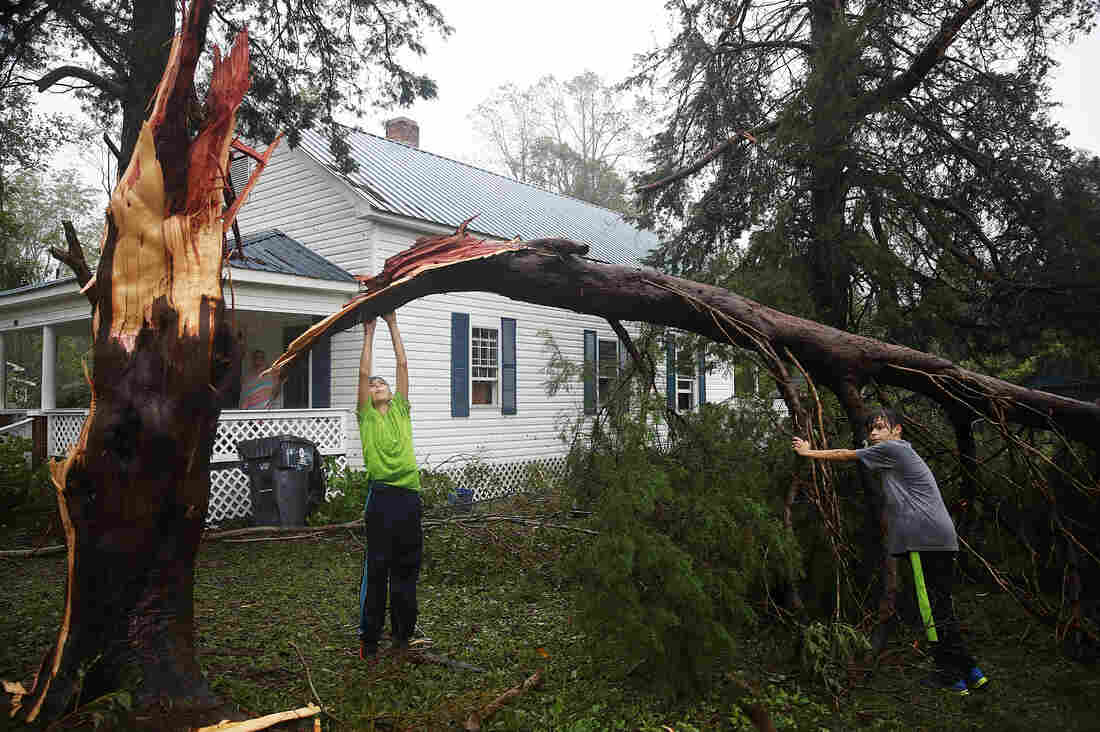 Jacob Fernandez (left) and Josh Fernandez play around on the tree that fell near their home when Hurricane Florence passed through the area on Friday in Bolivia, N.C. Joe Raedle/Getty Images hide caption 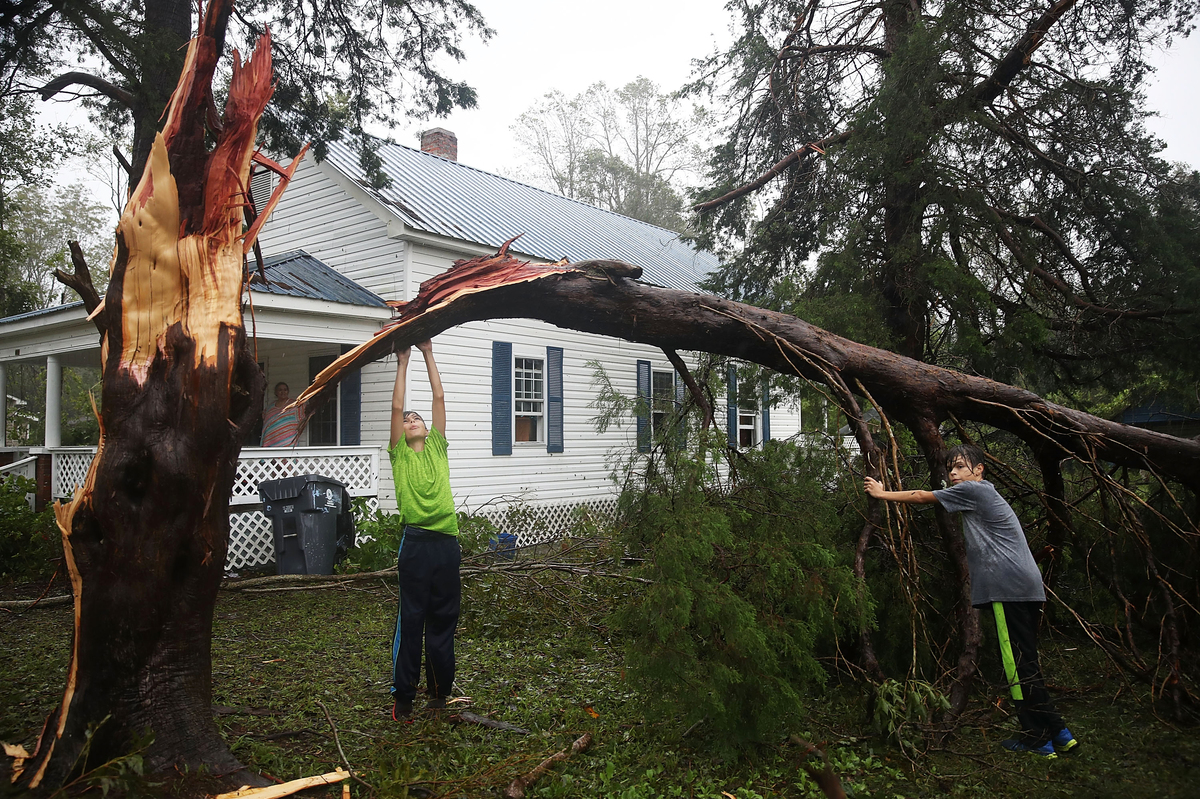 Jacob Fernandez (left) and Josh Fernandez play around on the tree that fell near their home when Hurricane Florence passed through the area on Friday in Bolivia, N.C.

Florence is enormous, slow and very, very wet. Storms get those qualities from warm ocean water and weak wind currents that allow them to suck up moisture and come to a gradual halt over land, dumping water everywhere. Experts say Florence is the kind of storm likely driven by climate change.

At least 5,500 people were staying at 59 Red Cross shelters across South Carolina on Friday, reported NPR's Rebecca Hersher and John Poole. "And Florence's plodding progress means they, and potentially many more, could be stuck sleeping among strangers for days more," they said.

Why They Chose To Stay In The Path Of Hurricane Florence