Accessibility links
An Ancient Ballgame Makes A Comeback In Mexico Ulama is a pre-Columbian team sport played with a solid rubber ball that's bounced off players' hips. In olden times, the game is said to have decided the winners of wars. 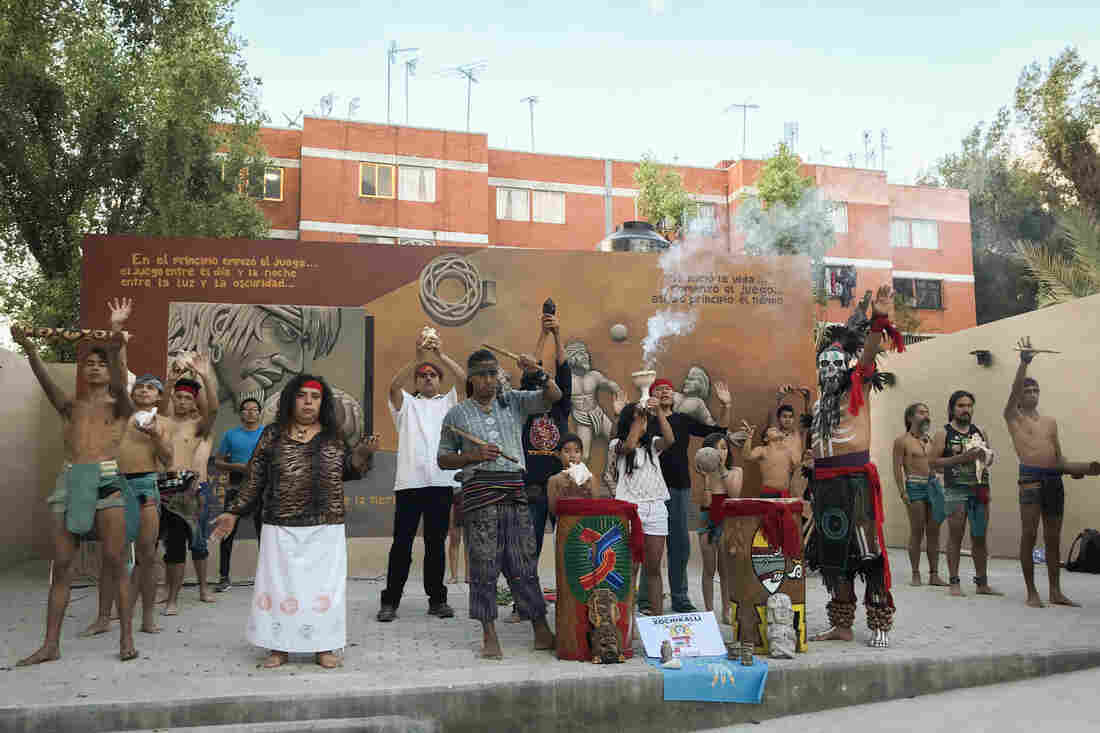 At the end of practice at the Xochikalli cultural center in Mexico City, ulama ballgame players perform a brief dedication to Aztec gods. James Fredrick for NPR hide caption 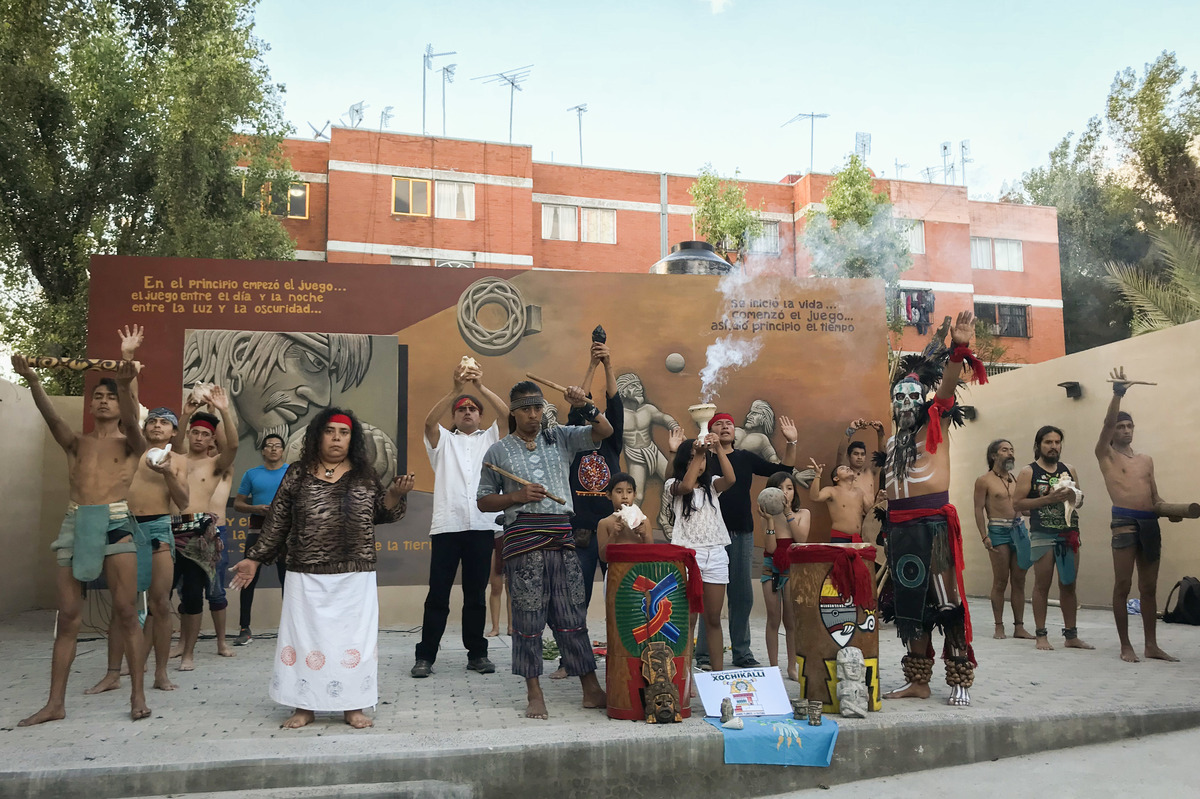 At the end of practice at the Xochikalli cultural center in Mexico City, ulama ballgame players perform a brief dedication to Aztec gods.

Drums rumble between the stone walls lining the court. An ancient ritual is underway. The smell of incense wafts across the concrete, as wiry men and a woman wearing leather waist wraps and headbands volley a ball back and forth. They use only their hip bone to hit it.

Emmanuel Kalakot tilts his head back and blows into a conch shell horn. The sound echoes off the brick walls of the apartment complex next door. For an instant, this doesn't really feel like 2018.

"It's not so much about returning to a moment that once was," says Kalakot, 40. "But we want to take something that was great in its time and make it great again, in a new, contemporary way."

Kalakot is leading a small group of players in the return of a millennia-old tradition to Mexico City: the ballgame known as ulama.

"There was a kind of pan-Mesoamerican ballgame played with the hip and we can say that it was prevalent, probably played in the majority of places," in the period around A.D. 200 to 900, says Manuel Aguilar, an archaeologist from California State University, Los Angeles, and a leading scholar on ulama.

Why Mexican Chefs, Farmers And Activists Are Reviving The Ancient Grain Amaranth

The players — mostly with no more than a couple of years' experience — make it look easy. They gracefully jump to hit a cantaloupe-sized solid rubber ball squarely with their hip, arcing it toward their opponents. A low ball forces players to drop to the ground, a move that makes the leather waist wraps particularly useful.

But it's painful to master, says Karen Flores, a 22-year-old medical student who's been playing for about two years.

"You have to play a lot for your body to get used to the blows," she says. "Ask anyone out here and they'll tell you about the dead legs and bruises they get playing."

That's because the official ball, made by hand of natural rubber, weighs more than 9 pounds. 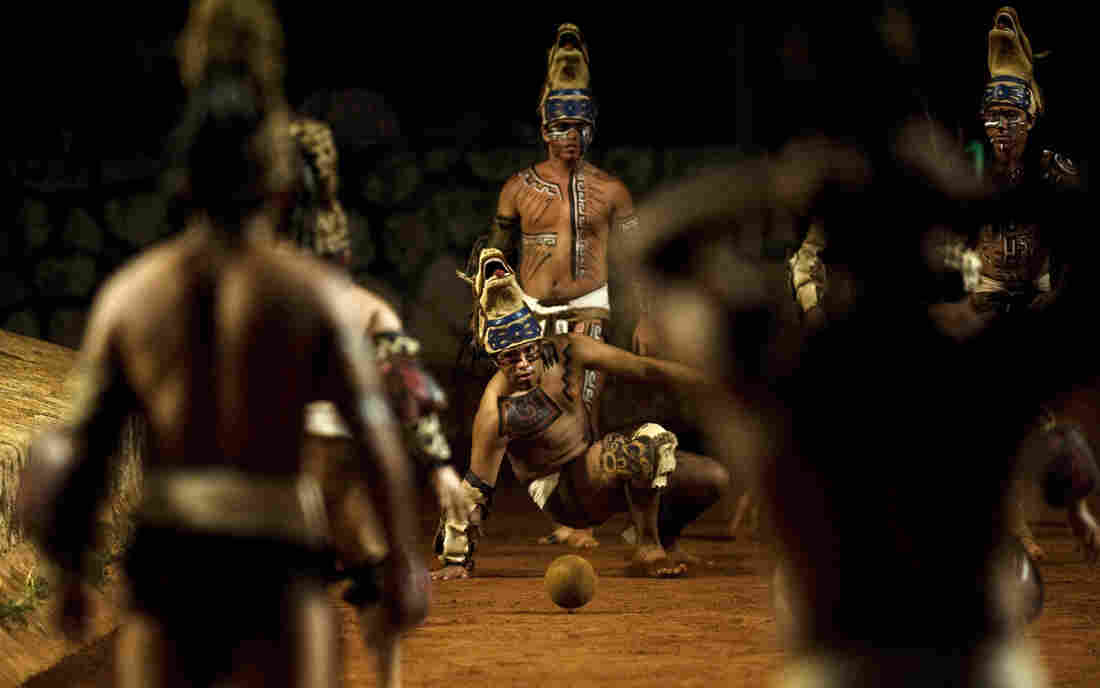 A traditional indigenous ballgame is among the pre-Hispanic exhibitions at an eco-archaeological theme park in Xcaret, Mexico. Luis Acosta/AFP/Getty Images hide caption 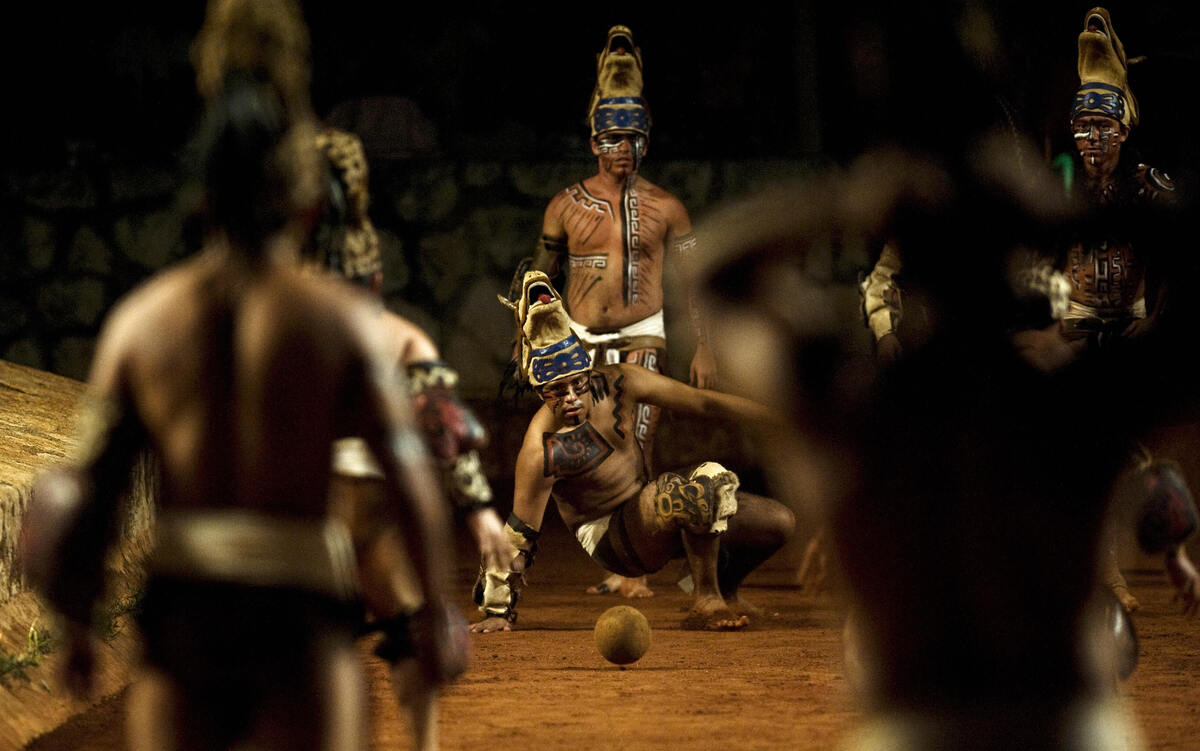 A traditional indigenous ballgame is among the pre-Hispanic exhibitions at an eco-archaeological theme park in Xcaret, Mexico.

The group playing at this court boasts about eight experienced players, who act as coaches for the handful of newcomers hoping to learn.

"My dream is for the court to be full, for people of all ages to come, learn, play and then go out and share this tradition," says Flores.

The Mexico City ball court — measuring about 30 feet by 120 feet — is the first piece of a brand-new community center called the Xochikalli in the northern borough of Azcapotzalco. The center is designed to practice a host of pre-Hispanic traditions, like xilam, a kind of Aztec martial art, and ancient farming techniques. There are also classes for Nahuatl, the most widely spoken surviving pre-Hispanic language in Mexico, the modern version of which is spoken by about 1.7 million people.

These players are excited to carry on the tradition of ulama because it endured across many centuries and civilizations in Mesoamerica. The oldest known court, discovered in Mexico's Chiapas state, is dated 1400 B.C. The Olmecs, the civilization dating back to 1500 B.C., probably played it. From about A.D. 200 to 900, civilizations from across Mexico and Central America had courts for playing, many of which can still be seen today at ruins like Chichen Itza and Tikal. 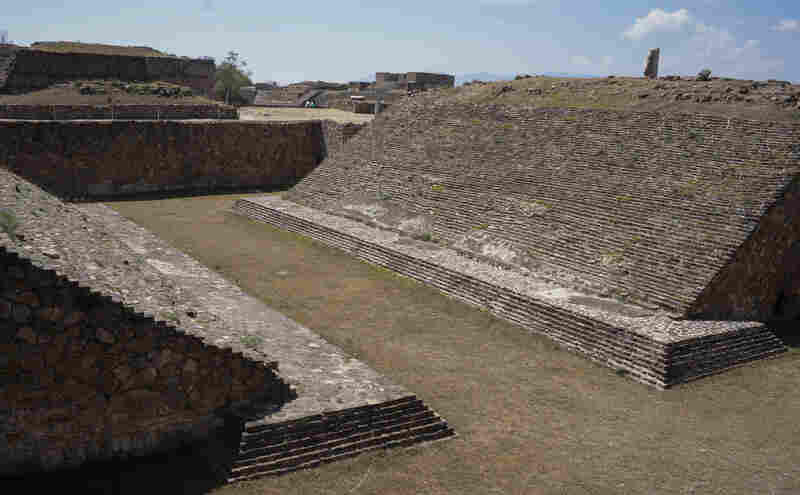 A view of the ballgame court at the Monte Albán archaeological site in Mexico's southern state of Oaxaca. Mike Castleman/Flickr hide caption 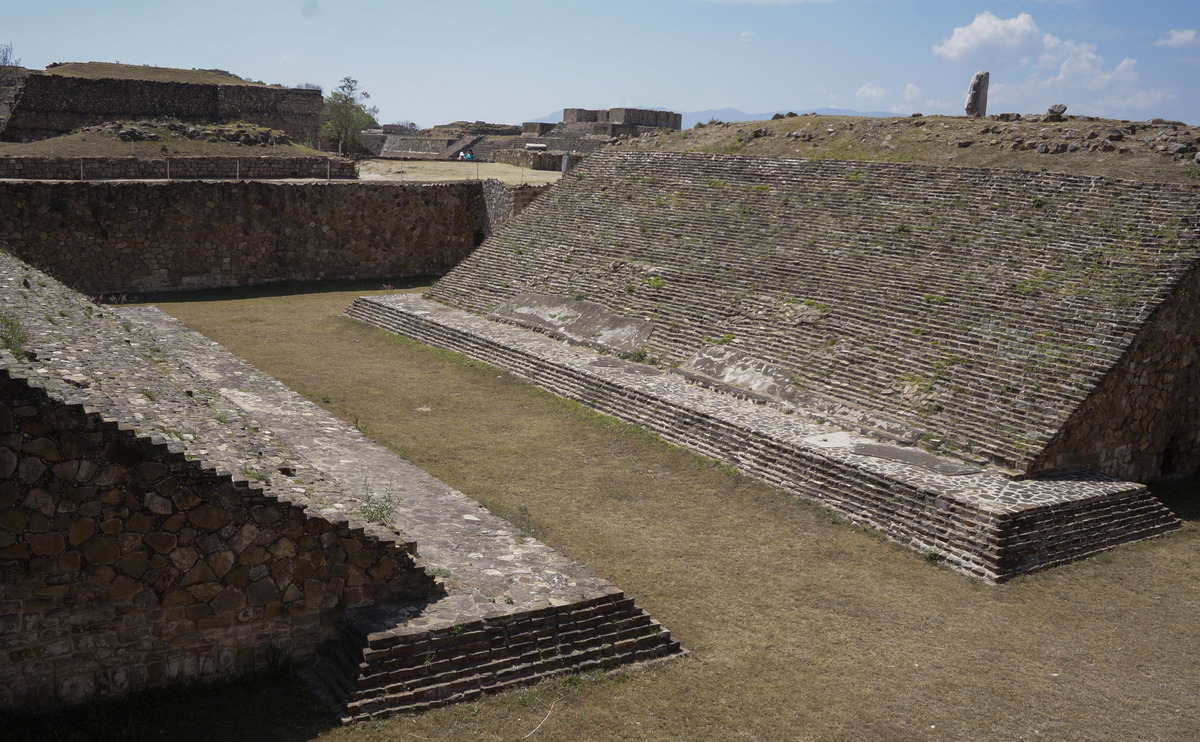 A view of the ballgame court at the Monte Albán archaeological site in Mexico's southern state of Oaxaca.

"We can see a continuity from the ones in the past to what exists today," says Aguilar. "It may not be exactly the same rules or same courts but the game that exists today is real survival of the Mesoamerican game."

The meaning of ulama has varied across time and place.

"From our studies, it looks like the game was originally ritual, it was religious activity," he says. "And in time, it became a sport, a recreational activity."

It was spiritual enough that Spanish Roman Catholic priests encountering the Aztec Empire banned it during the conquest. But the Aztecs were also rampant ulama gamblers.

"It was such an addiction to play the game that some people even bet their own lives, becoming slaves if they lost," Aguilar says.

In its most consequential form, ulama decided the fate of civilizations.

"We have documentation of one against one, king versus king," says Aguilar. "The game decides the winner of the war."

One of the most famous king duels happened in the early 16th century, when Moctezuma, king of the Aztecs, squared off against Nezahualpilli, king of nearby Texcoco. Nezahualpilli won the match and declared it was a sign of the coming fall of the Aztec Empire. (The Aztecs indeed fell just a few years later after the arrival of Hernán Cortés and the Spanish conquistadors.)

Some forms of ulama use the elbow or forearms to hit the ball, a sort of predecessor to volleyball without the net. This version is still played in the state of Sinaloa. There is ulama de mazo, a game played with clubs (mazos), kind of like field hockey. (Mexican immigrants from the state of Oaxaca have even brought a variation of that one, pelota mixteca, to California). 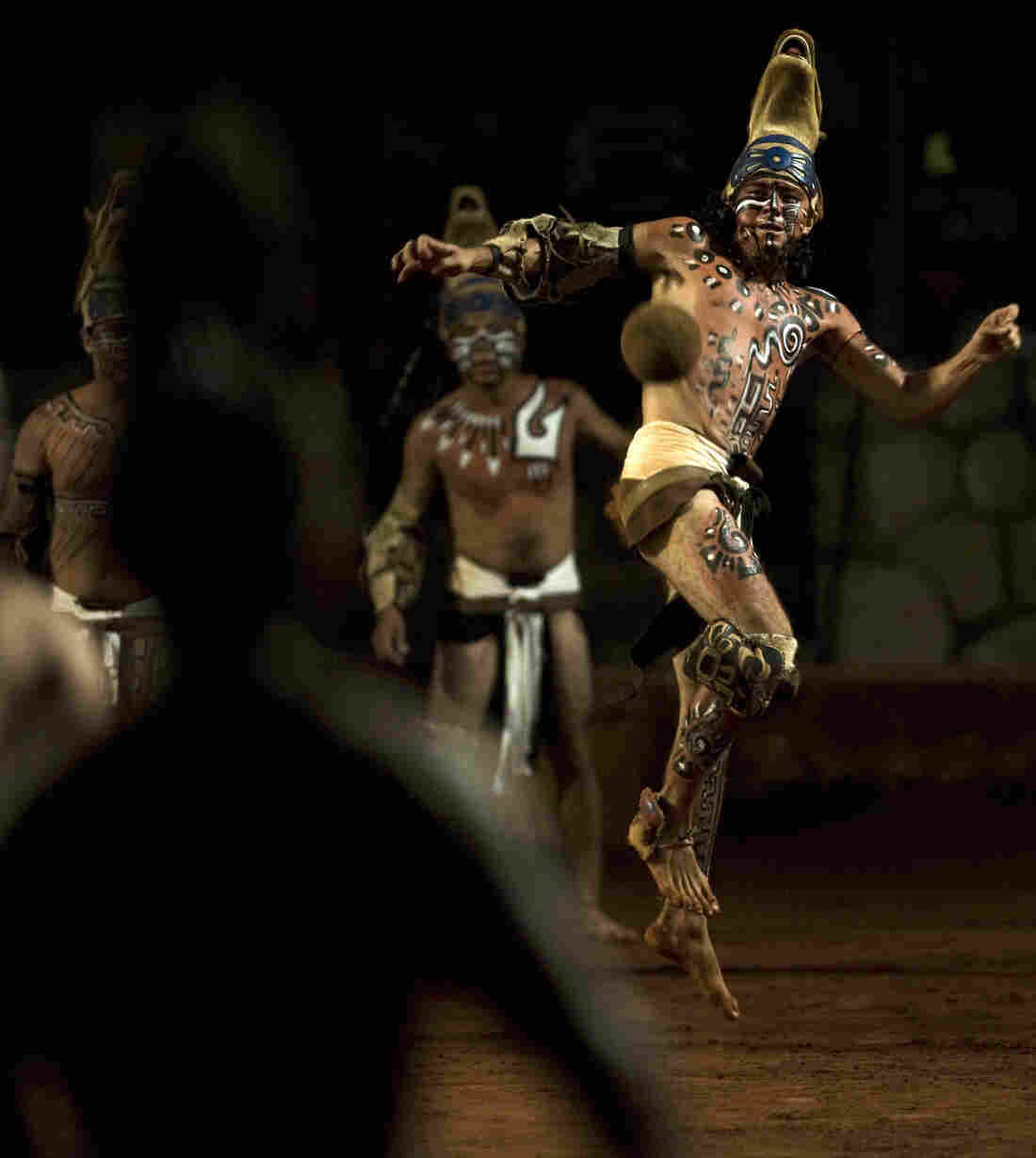 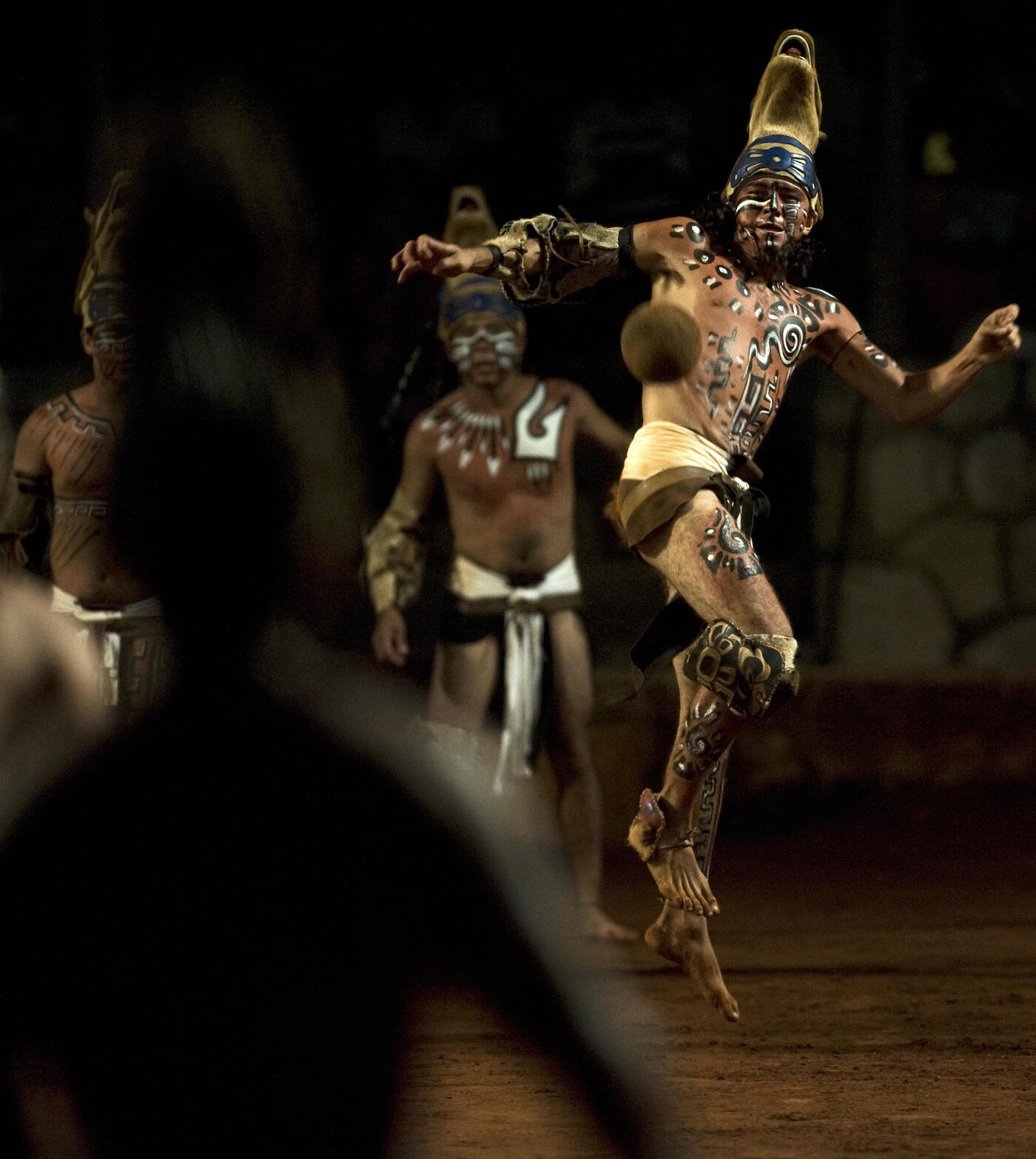 "The scoring is what makes the game so brutal, because if you lose a point when you are at a certain score, you start back again at zero," he says.

There are no ties in ulama, so if team A is winning 1-0 and then team B scores a point, the scores flips, with team A losing its point and team B taking a 1-0 lead. Between certain numbers like 2 and 3, you reach a transitional state called urria, where your team is liable to lose all your points if you concede a score. Ulama is won only with impressive rallies and scoring streaks.

(This explanation is admittedly lacking, but, in fairness, Aguilar says it took him and his team months to fully understand scoring.)

Needless to say, this complex scoring means it's very hard to reach 8 points, turning ulama into a brutal game of endurance. Some ancient matches are said to have lasted more than a week, and strategy was often based on simply wearing down or injuring opponents.

Aguilar says that small towns and families have preserved various ulama traditions, for many years after indigenous communities were ravaged across the region. But in the 20th century, experts worried the game would go extinct, even as tourist attractions like the Xcaret theme park near Cancún tried to promote it.

That's why coach Kalakot sees this new court as an opportunity for more than just recreation.

"We won't just be teaching the rules and how to play," he says. "We also want players to discover the culture and history and values passed down by the game."

But the presence of players like Karen Flores suggests ulama is coming into the 21st century.

"When I was younger, I saw it being played and I wanted to do it too but the people around me said it wasn't for women, that it could make me infertile," she says.

But Flores insisted, practicing hitting a soccer ball off her hip against a wall in secret. On the court today, she doesn't miss a step among the men.

Especially with a woman like Flores leading the way, this 21st century version of ulama probably doesn't look like it did in Aztec times. But if there's one consistency to the history of the game, it's that it has always been evolving. 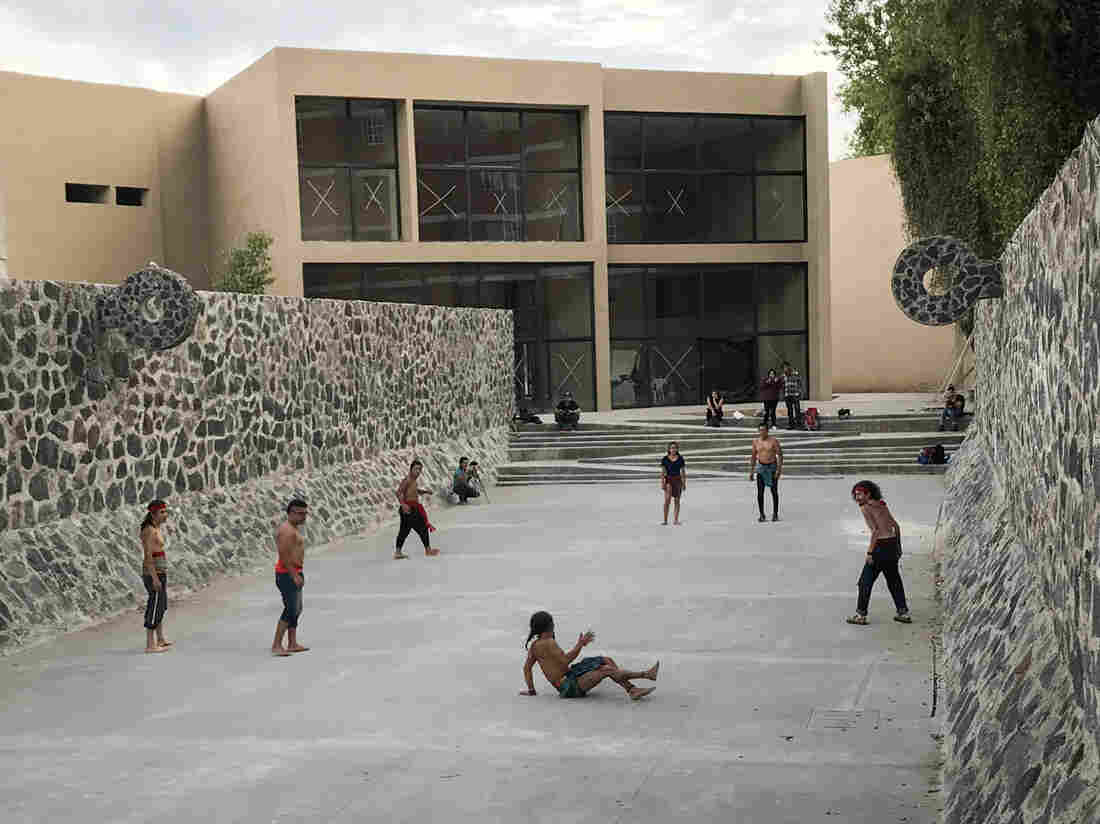 At a new court in Mexico City designed for ulama, a player drops to the ground to hit a rolling shot. The objective of the game is to hit the ball past the other team's backline. James Fredrick for NPR hide caption 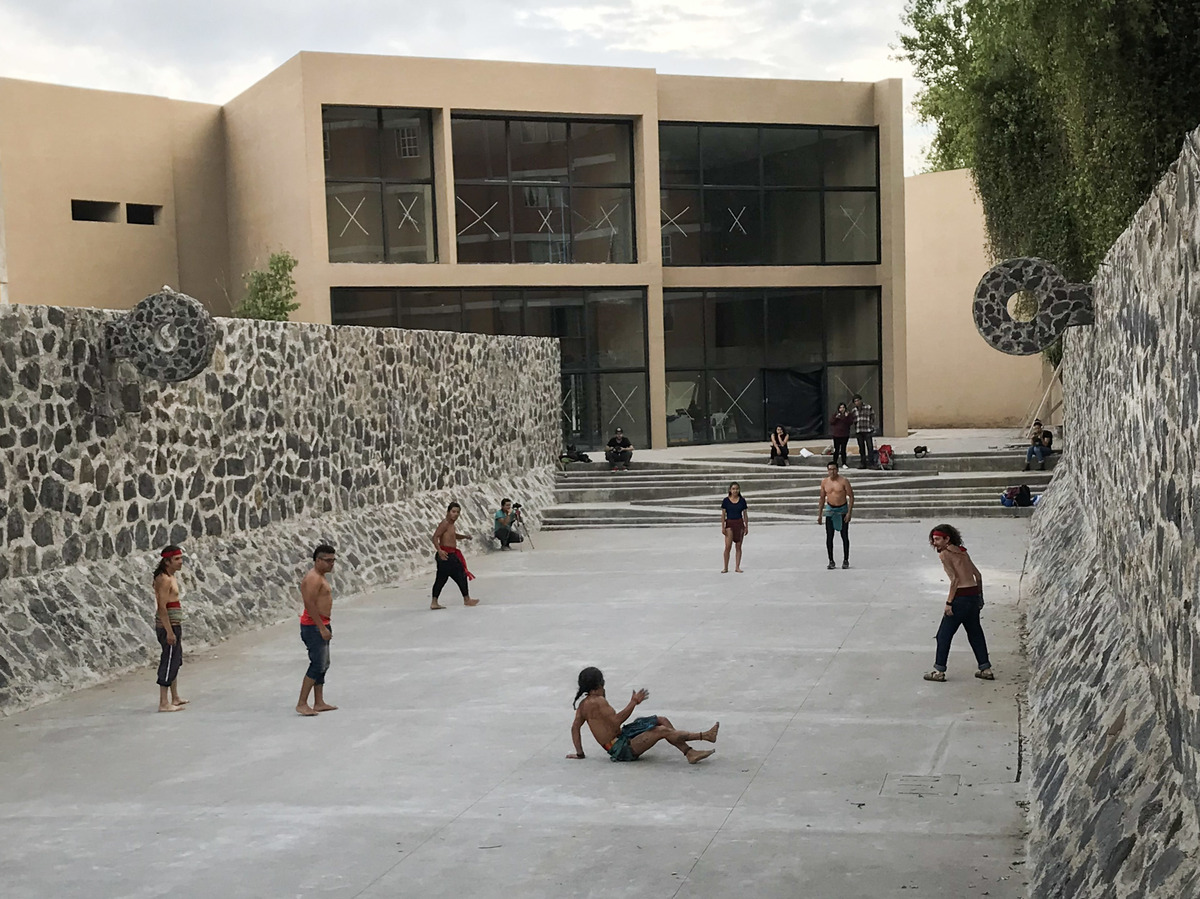 At a new court in Mexico City designed for ulama, a player drops to the ground to hit a rolling shot. The objective of the game is to hit the ball past the other team's backline.