Accessibility links
Mysterious Stones Found In Colo. May Have Been Ancient Musical Instruments Researchers thought the rounded stones found in the desert — clearly shaped by human hands — were used to grind nuts or seeds. But archaeologist Marilyn Martorano says they are actually lithophones.

Listen · 3:44 3:44
Mysterious Stones Found In Colo. May Have Been Ancient Musical Instruments 3:44

Researchers thought the rounded stones found in the desert — clearly shaped by human hands — were used to grind nuts or seeds. But archaeologist Marilyn Martorano says they are actually lithophones.

Read This Story — And Play The Lithophones — On CPR

Are These Mysterious Great Sand Dunes Stones Musical? When You Hear It, 'You Believe It' 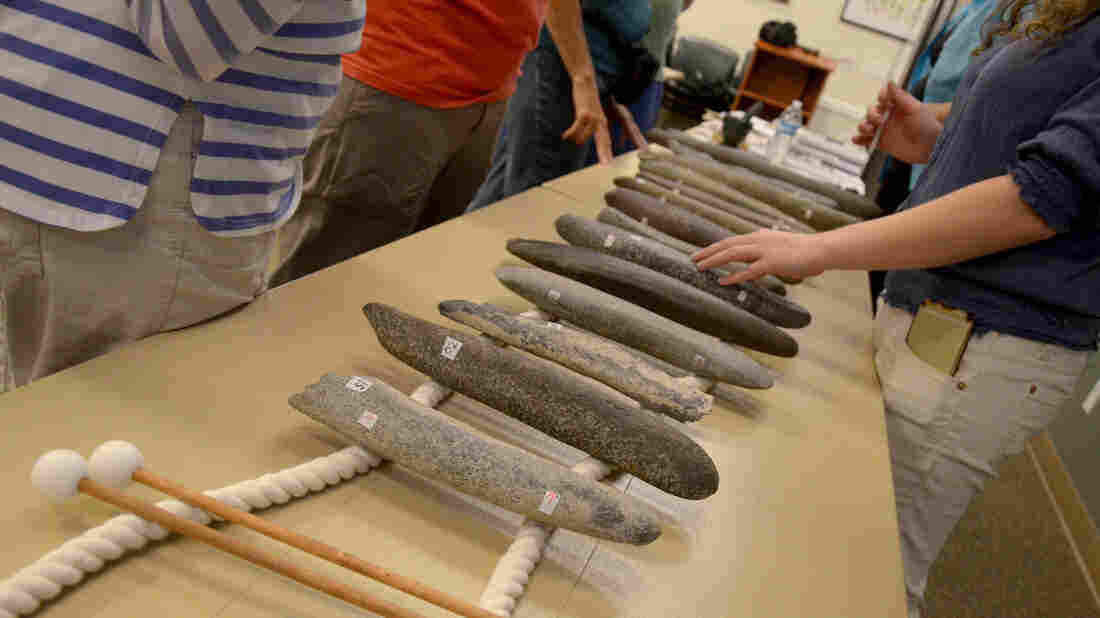 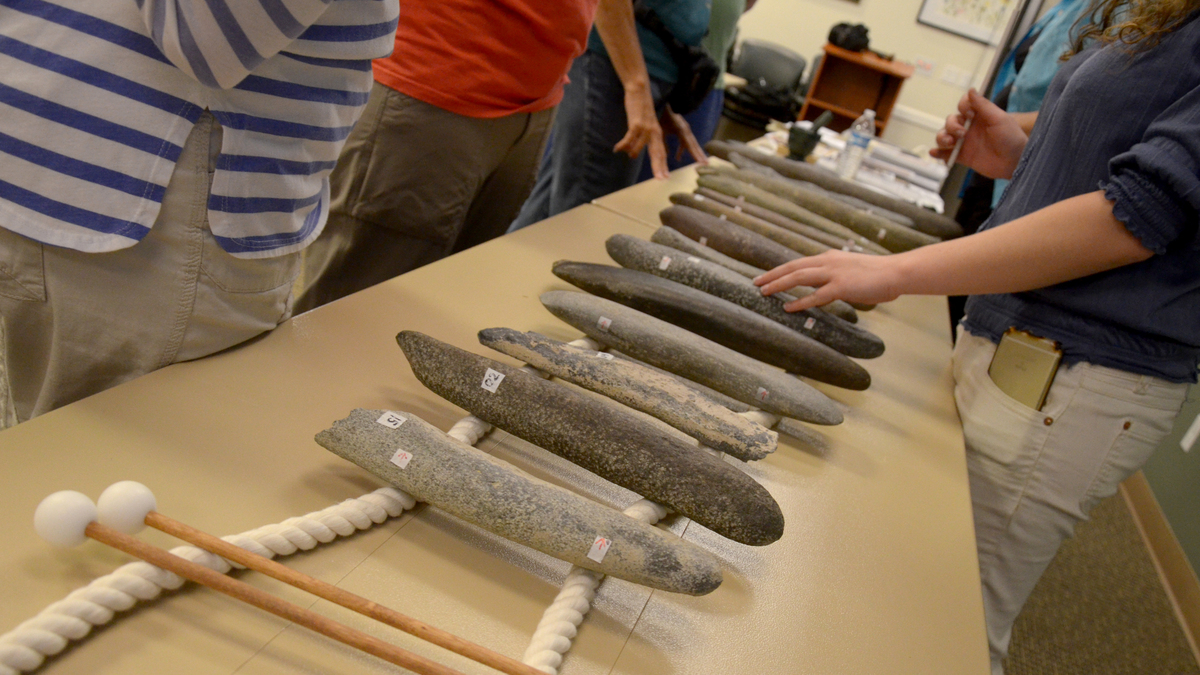 A set of rounded stones shaped like French baguettes baffled a scientist for decades after they were discovered in the high desert of southern Colorado. She finally unlocked the mystery and learned the stones were used to express a fundamental human impulse. Brad Turner of Colorado Public Radio has this story.

BRAD TURNER, BYLINE: The stones are clearly shaped by human hands. One of them has been dated as more than 5,000 years old. Researchers assumed they were tools, but they hadn't found hard evidence for it. Archaeologist Marilyn Martorano first came across the stones 40 years ago. She was a volunteer at what's now Great Sand Dunes National Park and saw the stones in a museum there. They were long, skinny and rounded at the edges - a set of oddities without a clear purpose.

MARILYN MARTORANO: And so we ended up just putting them back in the museum drawers. And we sort of thought, maybe someday, we'll figure it out.

TURNER: Three decades later, Martorano decided to look at the stones again. She borrowed them from the park to study them. The best theory had been that ancient people used them to grind nuts or seeds. Martorano didn't buy it. The stones didn't have the right kind of marks around the edges. But she couldn't find a better theory as she dug around for answers over the next few years. Then the day before she was due to return the rocks to the park, a friend passed along a video.

TURNER: It showed a collection of musical stones - lithophones - from a museum in Paris. Man-made lithophones have been found all over the world, but not in southern Colorado. Martorano finished the video, picked up some of the stones she'd spent so much time with and tapped on them.

MARTORANO: And then once I tapped on them, I thought, wow. Maybe I'm the first person who's ever heard these in a thousand years or something. And that's when I realized you really have to hear them. That's when you believe it.

TURNER: Martorano had a new theory. These were ancient musical instruments.

TURNER: Man-made lithophones are sophisticated instruments. Their creators shaped them out of resonant stone to have different pitches and textures. Researchers think some people held the lithophones in their lap and played them. Others suspended them like windchimes. Duncan Caldwell is a prehistorian who studies man-made lithophones in New England. Caldwell says the stones show that sound and music-making have been part of human creativity for thousands of years.

DUNCAN CALDWELL: So they're found all over the place. Wherever people were working with stone and realized that it had acoustic potentials, they probably were tempted to transform the stone.

TURNER: Caldwell says lithophones played a role in fertility and rainmaking rituals and communicating with deities. And Caldwell didn't simply study the stones. He worked with musicians in the Boston Landmarks Orchestra, who created music featuring replicas of ancient lithophones.

CALDWELL: What a thrilling thing and what a wonderful way of remembering the people who had created those ancient instruments.

TURNER: Duncan Caldwell says we're at the start of a golden era for the study of man-made lithophones. He and Marilyn Martorano both discovered their lithophones after the rocks sat unidentified in collections for years. Caldwell thinks there are lithophones gathering dust in collections all over the world, waiting for someone to tap on them and let their sounds be heard again for the first time in centuries.