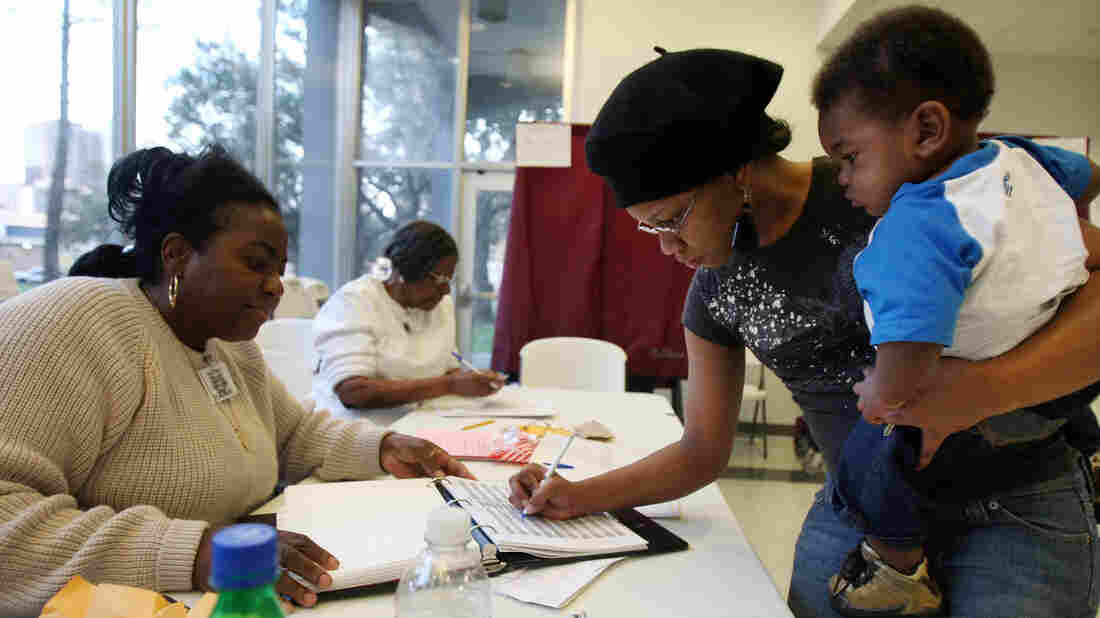 Charnisha Thomas signs in during the Louisiana presidential primary in 2008. In a new poll released Monday, African-American voters say they wait in longer lines and travel farther to get to polling places than white voters. Mario Tama/Getty Images hide caption 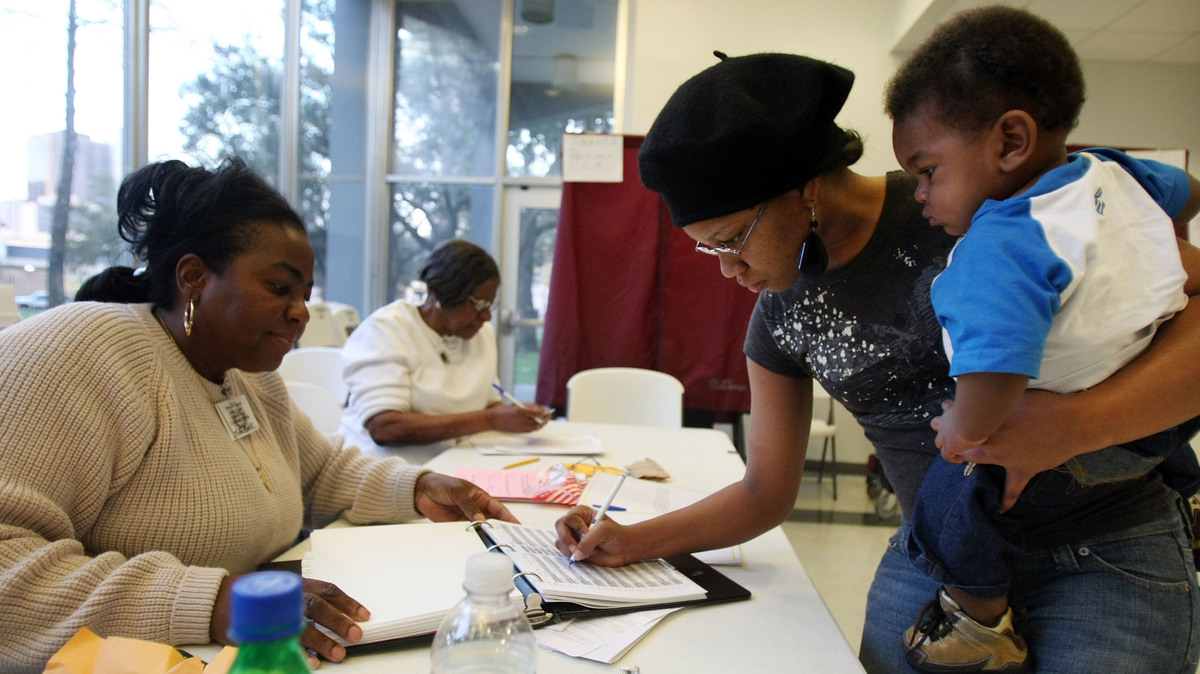 Charnisha Thomas signs in during the Louisiana presidential primary in 2008. In a new poll released Monday, African-American voters say they wait in longer lines and travel farther to get to polling places than white voters.

In a sign that America's two centuries-old democracy is under strain, nearly 2 in 5 American voters do not believe elections are fair, according to a new NPR/Marist poll. Nearly half of respondents lack faith that votes will be counted accurately in the upcoming midterm elections.

Race, gender and partisan identity are all a factor for those who question the cornerstone of the democratic system. Nonwhite voters, women and Democrats all report substantially greater doubts about the fairness of elections compared to Republicans, 91 percent of whom believe elections are fair.

Overall, 47 percent of all poll respondents said they think it is either likely or very likely that not all votes will actually be counted in November. And that was driven by the almost 60 percent of non-white voters who think there will incorrect tabulation.

"On a whole this is a pretty lousy report card on the state of American elections," said Dr. Lee Miringoff, director of the Marist College Institute for Public Opinion, which conducted the poll.

The NPR/Marist poll was conducted Sept. 5-9. It surveyed 777 registered voters and has a margin of error of 4 percentage points.

On the general question about how much people trust elections in the U.S. to be fair, 47 percent of women said they had little or no trust, compared to less than a third of men who said the same. Only 9 percent of Republicans answered that way, compared with 48 percent of Democrats.

Natalie Adona, a senior research associate at the Democracy Fund who studies election data, said that may have something to do with the fact that Republicans currently control Congress and the White House, as people generally have more faith in the electoral process if they have been successful in winning recent elections.

President Trump was elected in 2016 with a majority of electoral college votes, but he lost the popular vote in the U.S. by almost 3 million votes. That could also be having a disillusioning effect on Democrats when it comes to the "fairness" of American elections.

"There is a gap between white and nonwhite attitudes about a number of aspects of elections," Adona said. "It's not surprising to me, especially folks who come from communities that have faced barriers to voting, that they would perceive elections a bit differently than most Americans do."

Whereas 62 percent of white respondents said they travel less than 10 minutes to get to their polling place on average, just 41 percent of African-Americans and Latino voters said the same.

The average wait time in line was almost double (15.5 minutes) for Latino voters than for that of white voters (8.6 minutes).

Poll respondent LaDonna Bonner, a 47-year-old African-American woman in California said she didn't think elections were obviously biased against people of color in the U.S., but that subtle things like transportation and taking a day off from work are often more difficult than for white voters.

"Like, if it takes a day off from work to vote — will I have a job when I get back?" she said. "Those kind of issues may prevent people from voting. But the actual process of voting, I don't think anyone can really tell 'oh this is white person's ballot' or 'this is a black person's ballot.'"

In the poll results however, there was clear concern, driven by nonwhite voters, that vote tallying would be inaccurate in November.

While speaking with NPR, Bonner went on to mention Robert Mueller's ongoing Russia probe as something that makes her uncertain all votes are going to be counted accurately in this year's midterms. That is despite there being no evidence Russian interference had any effect on vote tallies in 2016 or any year prior.

Local election officials are responsible for clearly communicating how votes get counted and whether the results are audited after the election, said Neal Kelley, the registrar of voters for Orange County, Calif. Many voters simply don't know the mechanics of elections, and Kelley compared that to people getting on an airplane.

On a whole, the majority of Americans are satisfied with the job done by American federal agencies to prepare and secure elections leading up to the 2018 midterms, but not in President Trump's efforts. The poll was notably conducted prior to Trump signing an executive order that would impose sanctions on any foreign person or country that attempts to interfere in U.S. elections.