Accessibility links
With Wallpaper, 'Whiskey' And Women, Reese Witherspoon Celebrates The South The actress' book title, Whiskey in a Teacup, comes from a phrase her grandmother used to describe Southern women: Like whiskey in a teacup, they're beautiful on the outside and fierce on the inside. 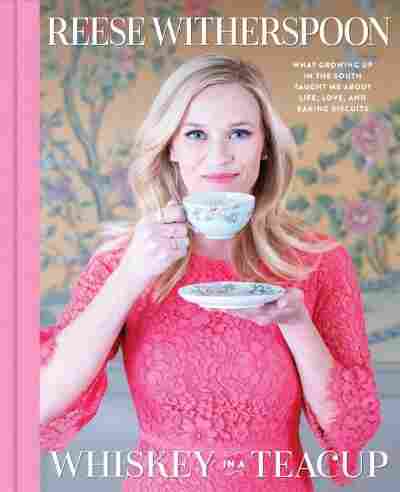 Whiskey in a Teacup

What Growing Up in the South Taught Me About Life, Love, and Baking Biscuits

Title
Whiskey in a Teacup
Subtitle
What Growing Up in the South Taught Me About Life, Love, and Baking Biscuits
Author
Reese Witherspoon

Reese Witherspoon says that if there's one misconception about Southern women it's that when they say "Oh, bless your heart" they don't really mean it. They do mean it, she insists ... or at least, usually they do.

Witherspoon, who was raised in Nashville, celebrates her Southern upbringing in a new book called Whiskey in a Teacup: What Growing Up in the South Taught Me About Life, Love, and Baking Biscuits. The book is full of memories, recipes, design ideas and cheerful photographs, celebrating small moments with family and friends.

The title comes from a phrase she remembers her grandmother saying: "Southern women are like whiskey in a teacup ... beautiful and presented well on the outside ... fierce and very strong on the inside."

When Witherspoon was young her parents had busy work schedules — her mother was a nurse and her father was a doctor. And so it was her grandmother who picked her up every day after school. "My grandmother raised me ..." she says. "I just learned everything from her — I learned how to read. I learned art. I learned cooking."

Years later, Witherspoon still shares her grandmother's love of wallpaper, decorative dinner plates and of course — monograms. She talks with NPR about Southern women, Southern charm, and the changes she sees in Hollywood.

On what to serve when you're hosting book club

I just I think it's so beautiful. It's such an art. It's something that I was raised with and then when I moved to California nobody did it, and I was so confused why everybody didn't have monograms on their towels and their sheets and their cups and their plates. ... I don't know where that tradition came from ... My daughter had to eventually say to me, Mom stop putting my initials on everything. I'm not from the South.

I think people thought I was being fake because I was so friendly.

On Southern charm being genuine

One thing that really in my mind defines Southern women is that they have very strong boundaries. And there is a warmth there but there's also a ferocity ... to protect your family, or your friendships, or your husband, or your children. There's definitely an idea of don't cross the line with me. ... They always they start with kindness, but really, don't mess with a Southern woman.

On the effort to get more women directing in Hollywood

Someone said to me the other day: We're running out of female directors because people are seeing this absence of female authorship and are trying to right the ship and correct themselves and hire more women to direct television shows, to direct films. ... We don't have enough women to employ because a lot of them didn't even bother to get started in a profession that they felt like was a dead end road. So it's incumbent upon us — you know, women, and other people in our industry that have leadership positions — to mentor.

On encouraging young people to tell their own stories

I think it's all about identity and owning where you're from and what your unique story is. ... No one should tell your story for you. You are the unique author of your own life and in this world where everyone has a platform, and everyone has an opportunity with social media to really get their voice out there, I think it's important to speak up and speak out — particularly if you've been part of a community that feels marginalized or unheard or unseen.

I hid all the junk for the pictures! Come on! When you know somebody is coming over to take a picture of your house you hide all the toys! ... They can see all the junk on my Instagram. On my Insta stories they can see the real chaos of my life. I wanted to present something that is visually pleasing and it's like, yeah, I cleaned it up for you people. I tried to make it nice.

On whether one should drink whiskey from a teacup

It depends on the kind of morning you're having.

Danny Hajek and Reena Advani produced and edited this interview for broadcast. Beth Novey adapted it for the Web.