Accessibility links
'I Lost Literally Everything': Historic Town Cleans Up After Catastrophic Flooding William Donelson came back to New Bern, N.C., to find his one-story brick apartment condemned. The town was hit by a nearly 10-foot storm surge from Hurricane Florence.

Listen · 5:22 5:22
'I Lost Literally Everything': Historic Town Cleans Up After Catastrophic Flooding 5:22 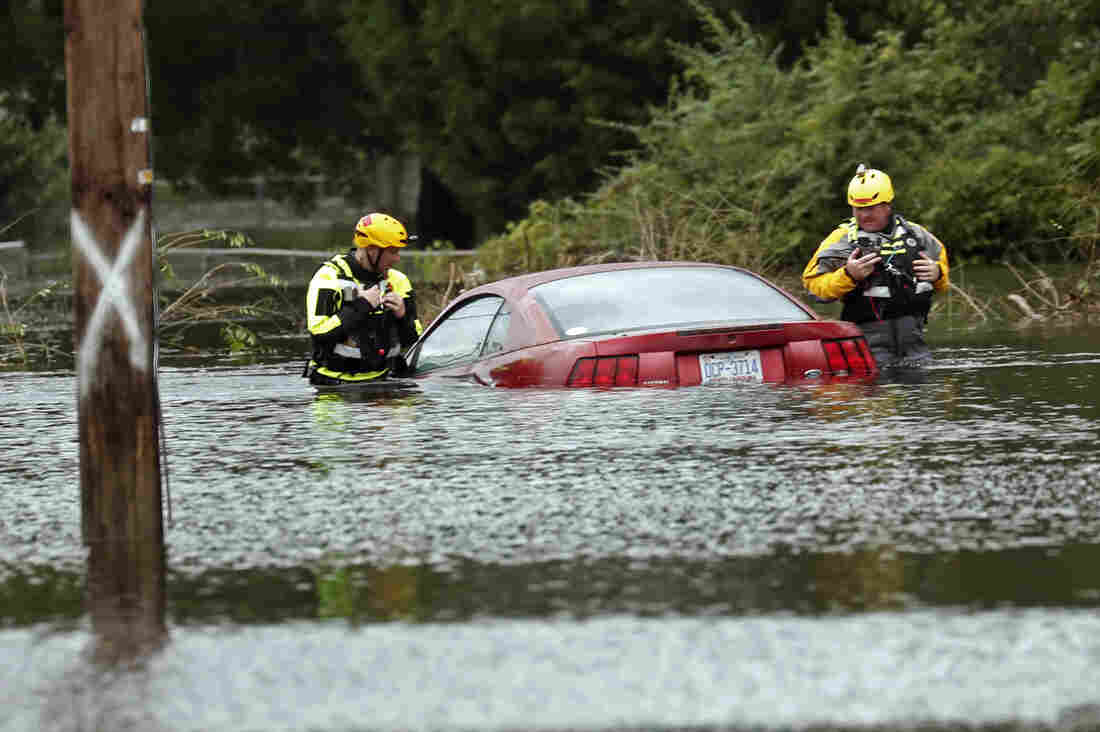 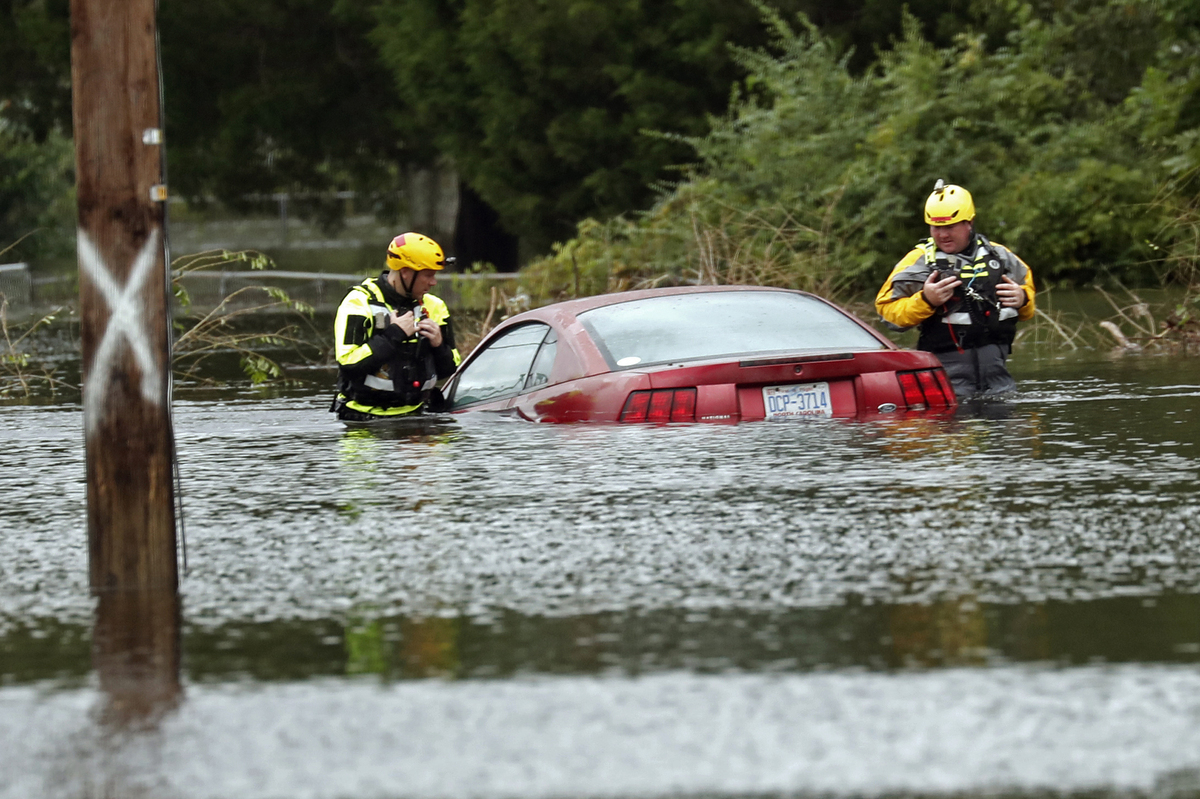 Members of a swift water rescue team check a submerged vehicle stranded in floodwaters caused by the tropical storm Florence in New Bern, N.C., on Sept. 15.

"At least it's not tax season," he says, trying to keep a good attitude after a foot of water flooded the storefront office. He is using fans to dry things out, as colleagues remove files from the second story.

"It came in quick, left quick," Rogers says. "We're trying to save as much as we can."

The front window is still boarded up with the spray-painted message #NewBernStrong.

For a fourth day, water rescues are underway in North Carolina as what's left of Hurricane Florence dumps torrential rains. At least 17 deaths are blamed on the storm, and more than half a million people are without electricity amid widespread catastrophic flooding.

Why They Stayed In The Path Of Hurricane Florence

With 'Angry Waters' Rising, Officials Warn Of Risk To Life From Florence

As the disaster spreads inland, residents on the coast are starting to pick up the pieces.

Historic New Bern, where the Neuse and Trent rivers meet, was hit by a nearly 10-foot storm surge from Florence. More than 400 people had to be rescued from the rising water. Boats from the harbor were strewn on downtown streets.

The rain had slowed to a drizzle by Sunday, and water had receded enough for some people who had evacuated to return home to see the damage.

"I lost literally everything," Donelson says. He has salvaged some soaked clothes that he'll try to wash, but most of his belongings are ruined.

"Everything else, though, is gone," he says.

The water line on the apartment wall is 4 feet high.

"It's got a smell now," says Donelson as he wades through the soupy black muck left behind. "It's nasty. Like sewage water everywhere." 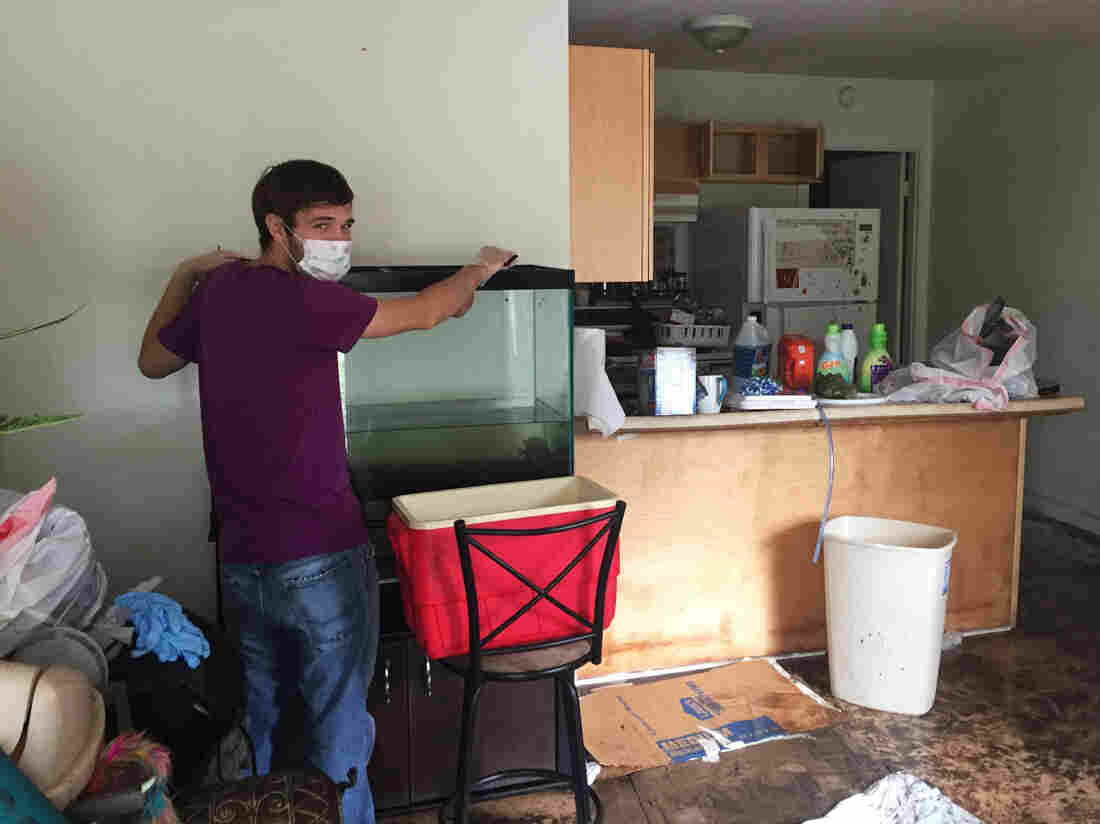 William Donelson transfers his fish from his aquarium after his apartment was flooded by Florence. Debbie Elliott/NPR hide caption 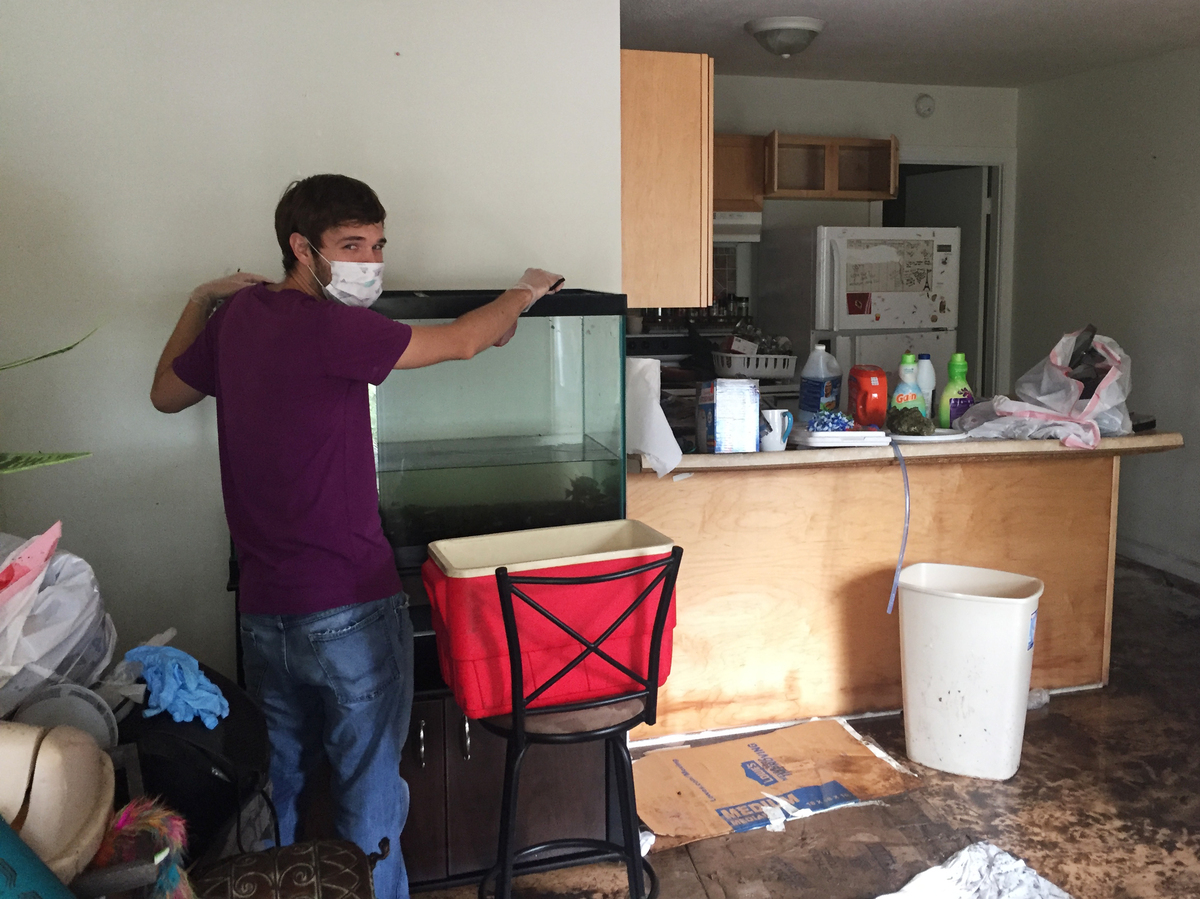 William Donelson transfers his fish from his aquarium after his apartment was flooded by Florence.

The kitchen counter is buckled from where the rushing water wrenched it from the cabinets below. His fish survived, so Donelson is transferring them from his aquarium to a cooler to take along with his dirty clothes to a friend's house, where he'll stay until he can regroup. That could be a while. The downtown restaurant where he is a cook was also inundated.

New Bern, North Carolina's first state capital, has seen its share of hurricanes, but even the old timers say Florence was something else.

"Never have I seen downtown like that," says Margaret Volney, a 92-year-old native of New Bern.

She says she has only seen it worse during Hurricane Hazel in 1954.

"I still have water marks on my crystal from that hurricane," she says.

Volney evacuated to a local hotel because of all the trees around her house. She has not been able to return because a big tree fell on a live power line in her yard.

"Basically we're all right," says Volney. "It's going to be a lot to clean up. But we'll survive. This is part of life and you know, it's just another hurricane."

Volney has come downtown to check on her nieces — who rode out Florence in their historic Victorian home, circa 1884.

Julie Mitchell and her sister, Debbie Edwards, grew up in the house. Sunday, Edwards was peeling masking tape from the front windows, which they had taped to prevent the glass from shattering. 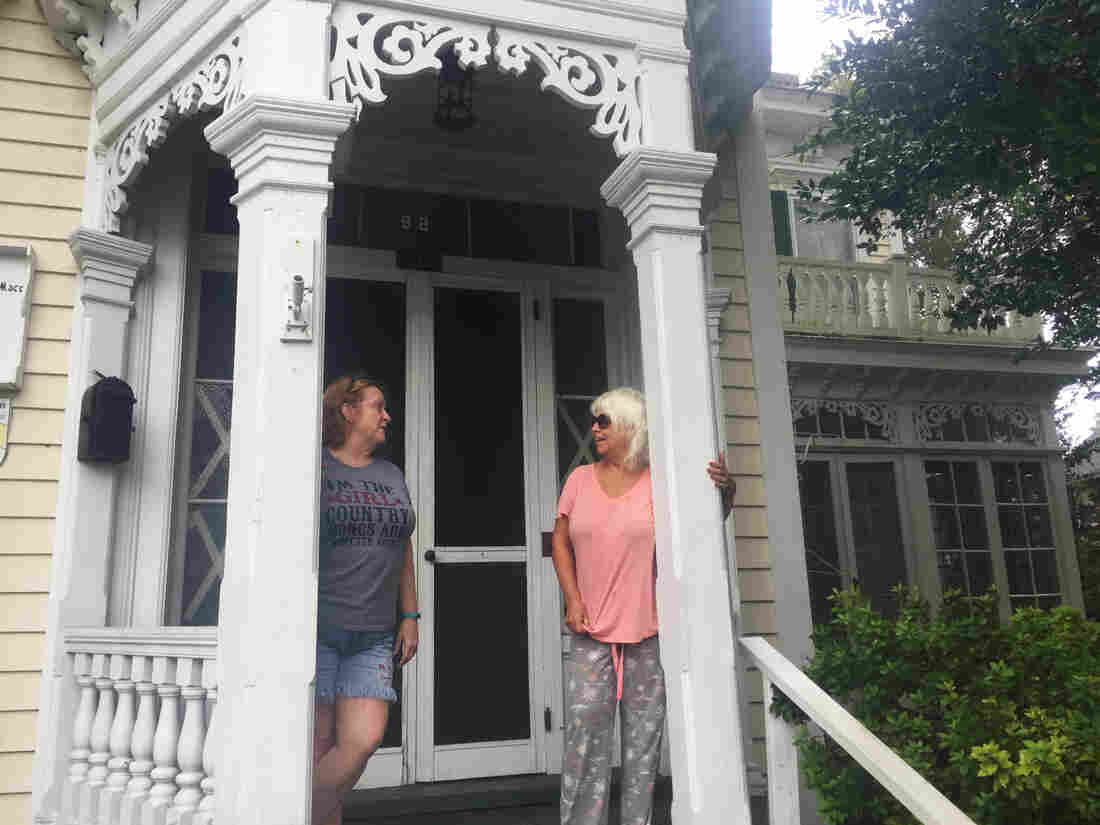 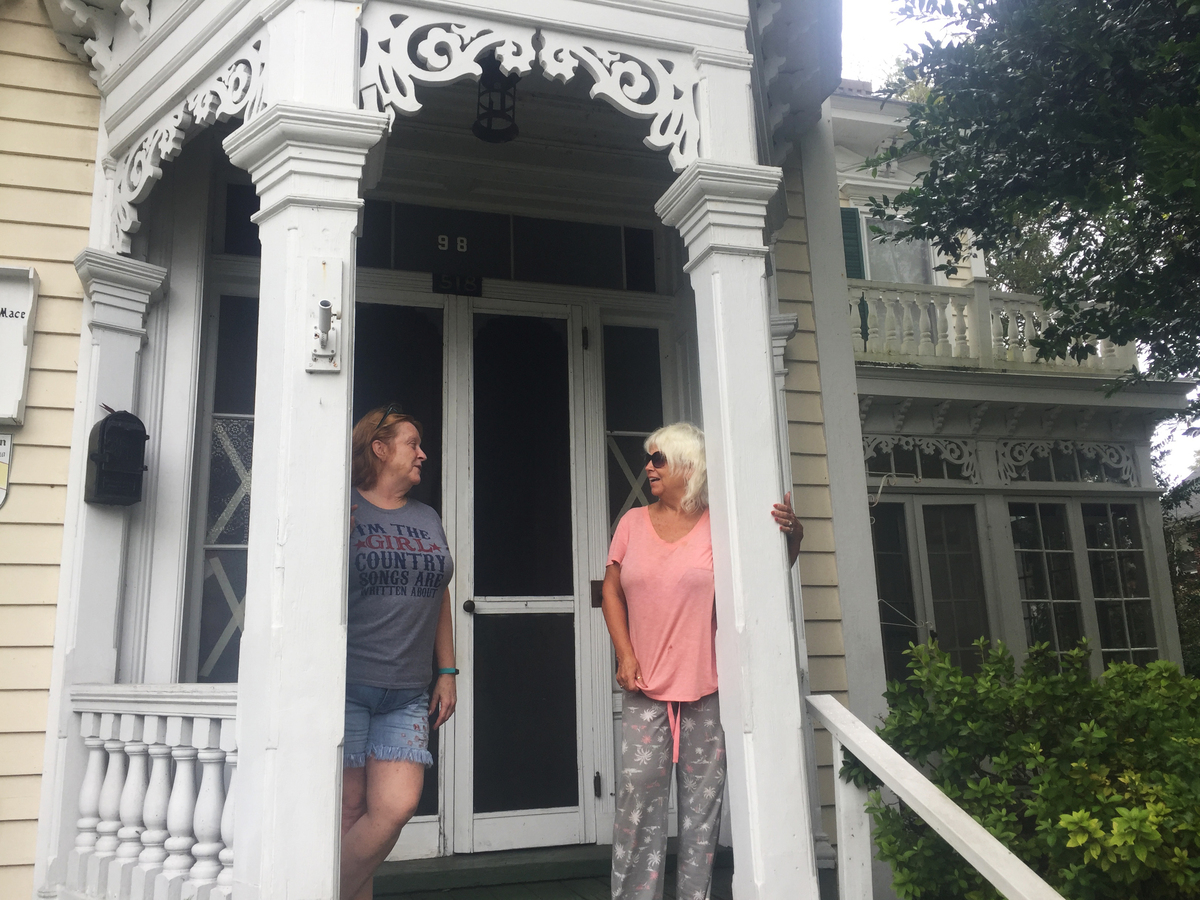 The sisters cooked meals in the gas fireplace for the three days because they had no power. They have several downed trees and a damaged fence but escaped the worst.

They did not evacuate.

She says the house has never flooded, so they stayed and watched the storm come in. Their street turned into a raging river.

"It has never, never been like this," Mitchell says.

"We had whitecaps in front of the house," says Edwards.

Edwards' truck had water nearly to the top of the wheels, but it never reached the house.

"This was the biggie," says Edwards. "But not one leak in the house."

Pam Scott and Larry Gold — who live on a canal that leads to the Trent River — also escaped the worst. They had evacuated, and they returned home Sunday to find that the storm surge came up to the fourth step that leads into their townhouse, but never got inside.

"I am so thankful," Scott says. "I don't know how we escaped this."

That I hope makes people stop and think: 'Wow there is civility left in this country.'

They have minor damage in the yard and garage, and a car took on water.

They've lived in New Bern for only four months and were quick to heed the evacuation order. "I'm glad I left," she says. "[Because] I felt safe."

Gold says he has been heartened to see people coming together to help New Bern recover.

"Regardless of what their backgrounds are, who they are, people coming from up and down the East Coast to lend a hand with a flat boat saving these people," Gold says. "That I hope makes people stop and think: 'Wow there is civility left in this country.' "