Accessibility links
Neil DeGrasse Tyson's 'Accessory To War' An Uncomfortable Wake-Up Call For Some An "unspoken alliance" between scientists and the military had been brewing for millennia prior to Hiroshima. Neil deGrasse Tyson and Avis Lang excel at detailing this union and its possible future.

'Accessory To War' An Uncomfortable Wake-Up Call For Some

'Accessory To War' An Uncomfortable Wake-Up Call For Some 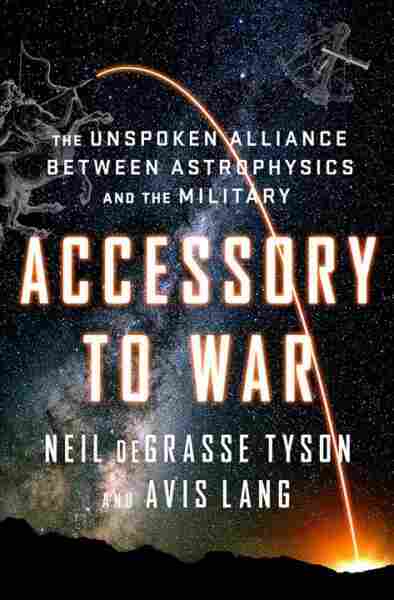 The Unspoken Alliance Between Astrophysics and the Military

Any doubts that science has a dark side were extinguished when, on August 6, 1945, an American Air Force B-29 bomber dropped the atomic bomb Little Boy on Hirsoshima.

Just weeks before, on July 16, scientists and military personnel working at the top-secret Los Alamos facility had detonated the first-ever atomic bomb. Everyone present knew that the world would never be the same after that. "Now I am become Death, the Destroyer of Worlds," Manhattan Project director J. Robert Oppenheimer was quoted as having said years later, reminiscing about the event.

That turning point in the history of humanity had been brewing for millennia, the result of the "unspoken alliance" between scientists and the military.

In Accessory to War, astrophysicist and popular director of New York's Hayden Planetarium Neil deGrasse Tyson, indefatigable promoter of science to the general public, joins forces with his long-term editor Avis Lang to deliver a powerful report of this deadly alliance, focusing on its history, science, and the impact it has had on the American century-long worldwide dominance.

The book makes for fascinating reading. The history, dating back to ancient Greece and before, and stretching to current events, is meticulously researched. There are copious notes and bibliographical references. The science is carefully explained, with Tyson's trademark passionate clarity. There are forays into ancient astronomy, astrology, navigation, the development of telescopes and the many tools that scientists use to explore all wavelengths of light from radio to gamma rays. Tyson retells the history of space exploration, and of the Cold War, excelling in bringing forth the entangled advances of science and military interests.

The book's message rings like a wake-up call, even if an uncomfortable one for the pacifists out there. War makes the world go 'round. It heats up the economy, as governments flood private military industries with lucrative contracts. It heats up scientific research, as governmental agencies flood research universities with cash. Jobs follow in many sectors, personnel get trained, with a resulting upsurge of technicians, engineers, and science PhDs. Knowledge flows both ways — from the university laboratory to the military and back. Everyone benefits from the unspoken alliance. To a large extent, American science jumped to world dominance because of the success of the Manhattan Project, which was responsible for building the atomic bomb.

The great fuel that followed was the Cold War and the consequent race to conquer space. As the noted historian of cities and technology Lewis Mumford wrote: "the moon-landing...is a symbolic act of war, and the slogan the astronauts will carry, proclaiming that it is for the benefit of mankind, is on the same level as the Air Force's monstrous hypocrisy—'Our Profession is Peace'."

No science is immune to this, not even the most arcane. We all have our hands dirty, despite the vast majority of scientists having only curiosity about the world as their main inspiration. Few join the military or the defense industry willingly. Nevertheless, the end result is the same, irrespective of personal choices or qualms: Whoever dominates the technology wins the war game, pure and simple. So, if you want to be at the peak of the technology game, at the cutting-edge of research, you'd better work in a country where the purses of the military and the scientists are deeply allied.

The history of the world can be told in terms of the long succession of empires rising and falling. The rising is always very similar: military prowess, a combination of strategy and technology, determines the winners. I was surprised not to see a mention to Jared Diamond's Pulitzer-prize winning book Guns, Germs, and Steel, since it tells a complementary story — that of the domination of Western colonizers through their technological superiority.

I also would claim that the boundaries within different physical disciplines are more porous than how Tyson and Lang depict them. Nowadays, high-energy particle physics is as invested in space exploration and astrophysical-related research as are astrophysicists. The so-called golden age of cosmology and astrophysics is a result of the joint effort of many different kinds of physics, that involve space-borne satellites and underground particle detectors. We are all trying to figure out the universe together, and the key questions in the different areas are more convergent than ever. What's the material composition of the universe? What secrets are harbored within black holes? What kinds of life could we find in exoplanets, if any?

Tyson and Lang make it abundantly clear that America's dominance both as a science powerhouse and as the main player in space exploration is floundering. Despite America's still lavish investment in defense, it can no longer claim dominance over space technology. Russia, and more importantly, China and India, are rising fast. The picture is quickly changing.

Tyson and Lang do end the book on a somewhat positive note, arguing that with future space exploration the situation is different. There are, of course, huge economic interests up there, from space tourism to asteroid mining — and these are the main drivers for a new player in the game, private corporations like Elon Musk's SpaceX and Jeff Bezo's Blue Origin. If the skies were seen by the military as an inevitable battlefield, and by physical scientists as their research ground, they are now also seen as money-making markets.

The dance for power and control of space is getting much more complex and this can, in the long run, be a good thing for science. After all, since science is the backbone of the whole thing, the surest way to stay on top of what happens in space is to make sure your science is on top, too. This will require an alliance between scientists, the military, and private interests.

Given that a war in space is, like its thermonuclear counterpart, a war with no winners, it is indeed possible that the tide will turn and space will be seen as the last frontier — not for a single power, but for humanity as a whole. I remain optimistic that this will be the case, despite our tragic past history.

Marcelo Gleiser is the Appleton Professor of Natural Philosophy and Professor of Physics and Astronomy at Dartmouth, where he also directs the Institute for Cross-Disciplinary Engagement. His latest book is The Simple Beauty of the Unexpected: A Natural Philosopher's Quest For Trout and the Meaning of Everything.