Accessibility links
Russia And Turkey Agree On A Demilitarized Zone In Syria's Last Rebel Stronghold The leaders of Russia and Turkey say they want to set up a buffer area in Idlib province by mid-October to avert a catastrophic military offensive. 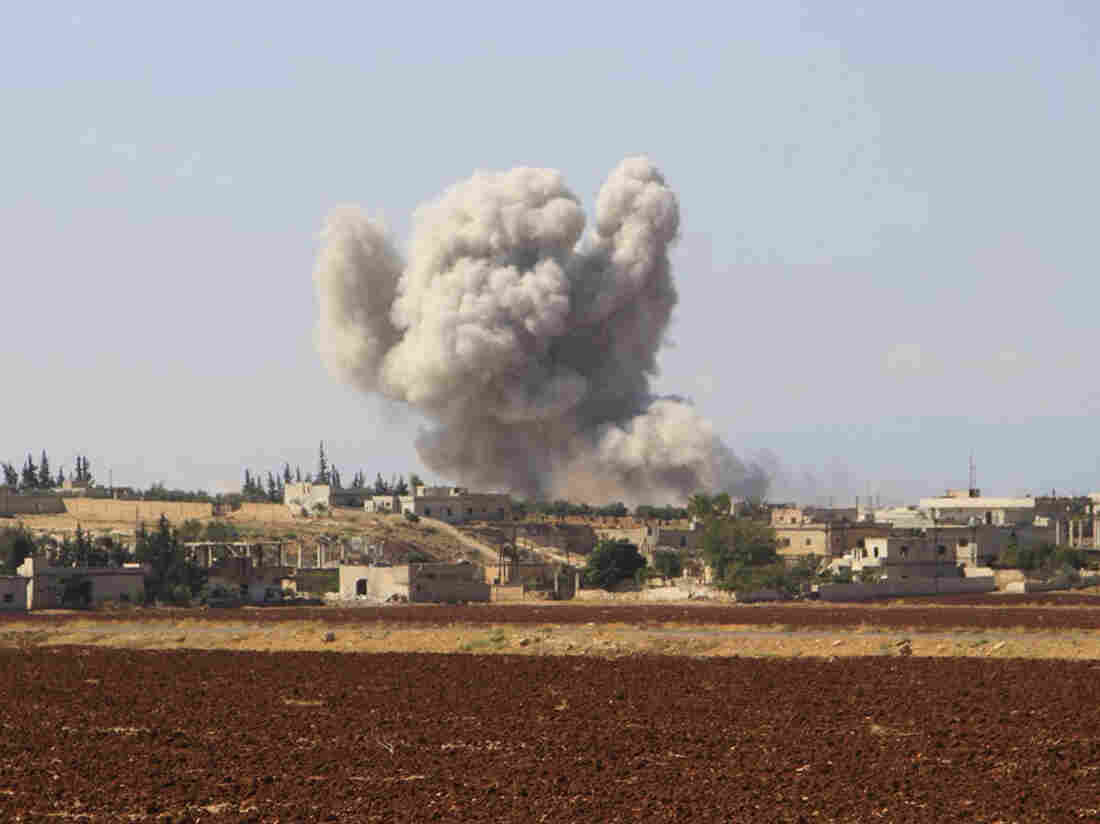 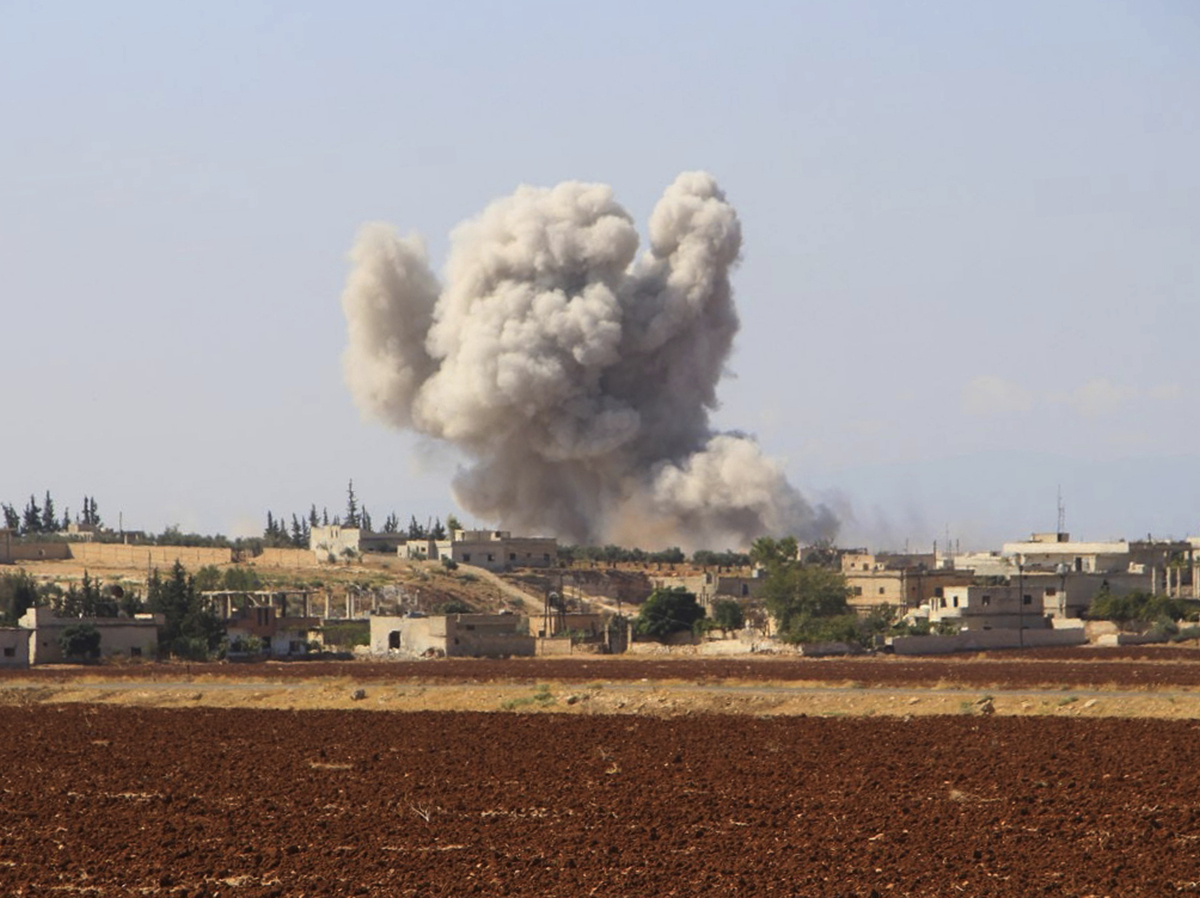 This photo released on Sept. 10 by the Syrian Civil Defense group, known as the White Helmets, shows smoke rising from an airstrike, in Hobeit village, near Idlib, Syria.

The leaders of Russia and Turkey announced a plan Monday to establish a demilitarized zone in Syria's Idlib province, in an effort to avert a looming military offensive that aid groups say would have catastrophic humanitarian consequences.

In long talks in the Russian city of Sochi, Turkish President Recep Tayyip Erdogan and Russian President Vladimir Putin agreed to create a buffer area between Syria's rebels and pro-government militias by Oct. 15.

"I believe that with this agreement we prevented a great humanitarian crisis in Idlib," Erdogan said in a joint news conference with Putin after their meeting.

The zone will be set up along 9-12 miles of land that would separate the warring sides along the southern fringes of Idlib province.

Putin — the most important outside backer of the Syrian government — said heavy weaponry such as tanks and missile launchers will be withdrawn from the area. While some rebel groups already based in the region will be allowed to remain, extremist factions such as the Hayat Tahrir al-Sham, a group formerly connected to al-Qaida, will have to pull out. 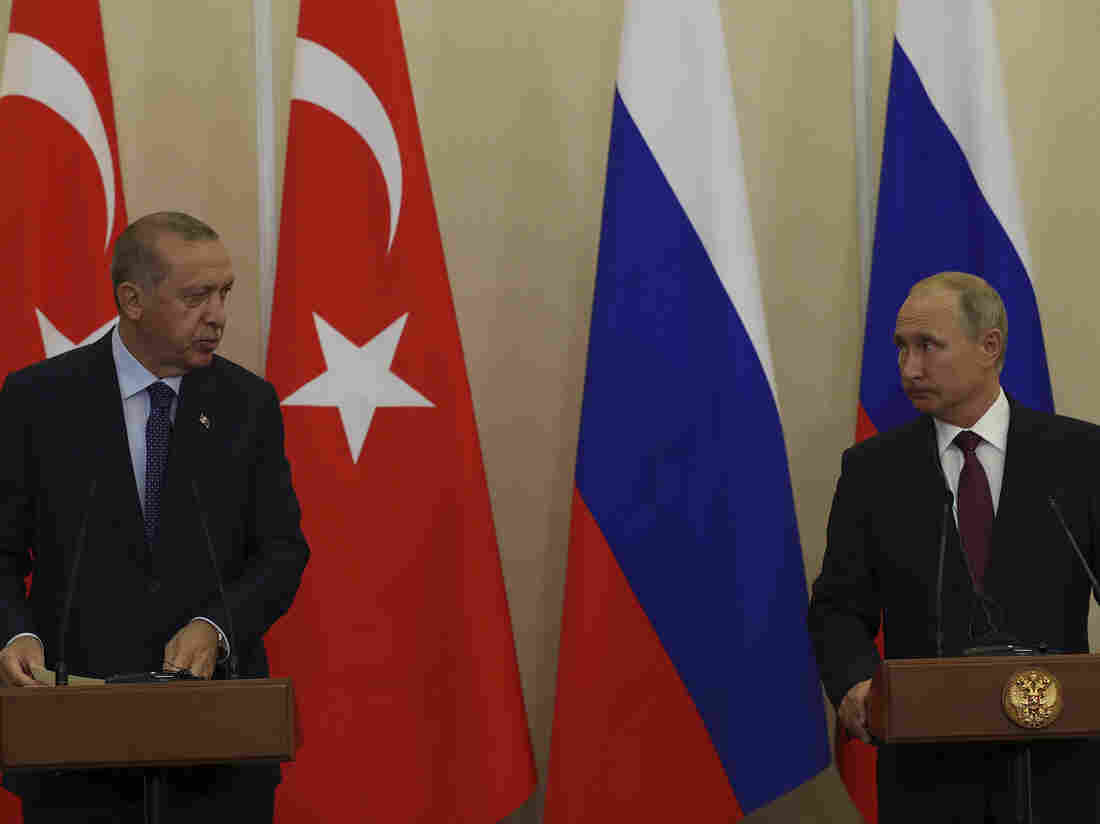 Russian President Vladimir Putin (right) listens to Turkey's President Recep Tayyip Erdogan, during a joint news conference following their meeting in Sochi, Russia, Monday. The province of Idlib in northwestern Syria is the largest bastion of the opposition, and Turkey has been eager to prevent a potential government offensive there. Presidential Press Service via AP, Pool hide caption 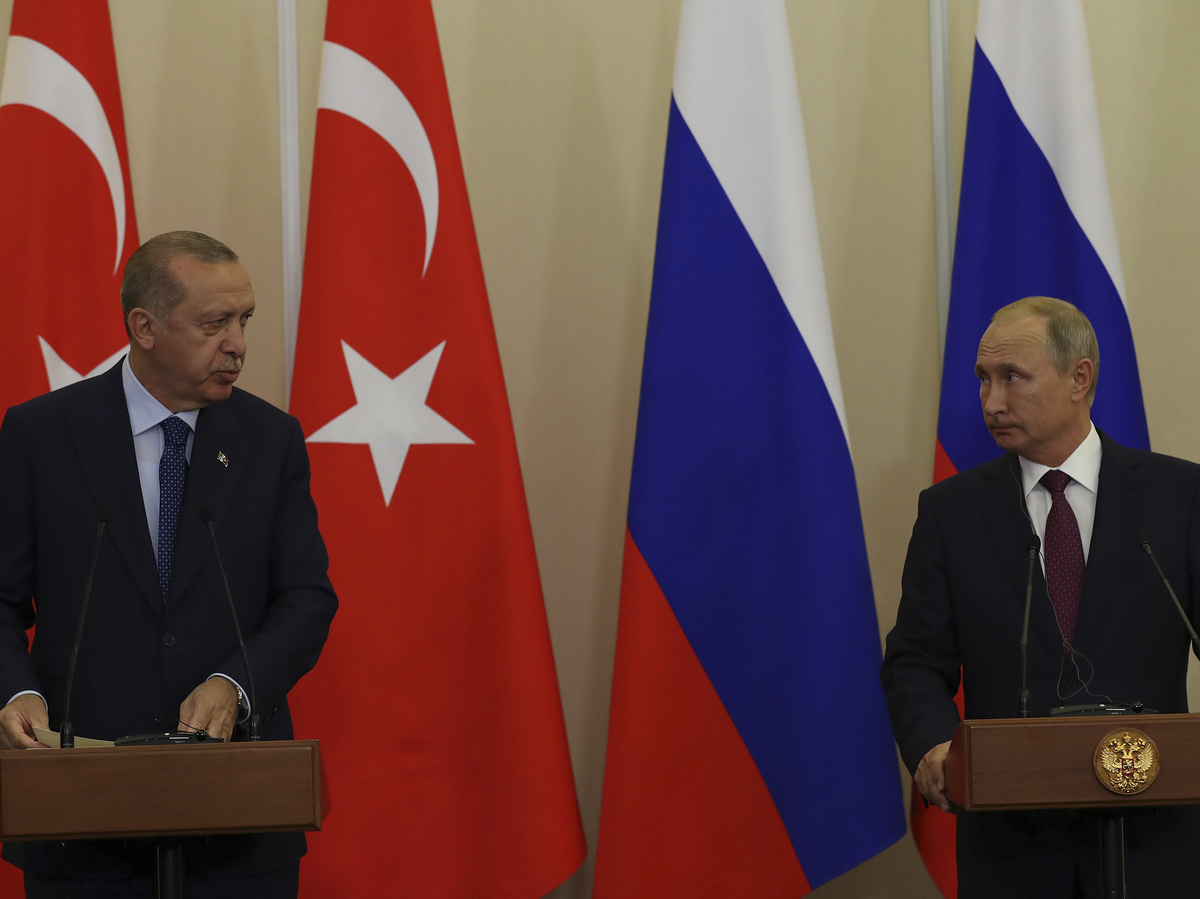 Russian President Vladimir Putin (right) listens to Turkey's President Recep Tayyip Erdogan, during a joint news conference following their meeting in Sochi, Russia, Monday. The province of Idlib in northwestern Syria is the largest bastion of the opposition, and Turkey has been eager to prevent a potential government offensive there.

The agreement comes amid fears of an all-out offensive by the Syrian regime and its allies on Idlib — the last major rebel stronghold in Syria's 7-year-old war.

Although the skies were quieter on Monday, as Putin held the talks with Erdogan, dozens of civilians are believed to have died in attacks on Idlib in recent weeks.

The province is a last bastion for thousands of rebels and home to about 2.9 million people, including as many as 1 million children, according to the United Nations. Many of the current residents went there to flee the war in other parts of the country.

The escalating violence prompted increasingly urgent international calls to protect civilians in Syria. António Guterres, the United Nations secretary general, warned that a sustained offensive would "unleash a humanitarian nightmare unlike any seen in the blood-soaked Syrian conflict."

Turkey, which shares a 560-mile border with Idlib province, worked to rally international support for a solution, saying that an assault would trigger a wave of refugees into Europe.

After initial efforts to secure a cease-fire failed, Turkey sent more troops inside Syria and bolstered support to rebel groups in the area. Experts saw this as a move by Erdogan to exert pressure on Russia and the Syrian regime, by creating a reminder that these rebel factions could move once more on cities such as Aleppo that have already been recaptured by the Syrian regime.

Both Erdogan and Putin hailed Monday's agreement as a major breakthrough.

The demilitarized zone is due to be patrolled by Turkish soldiers, who already hold 12 military observation outposts along the southern border with Idlib, and Russian military police.

Rebel groups aligned with Turkey heralded the decision on Monday as a sign that the Syrian regime was hesitant to launch a full-scale ground invasion against the city and towns in this sprawling province.

"I think the Russians and the regime know if they attempted a ground invasion there would be grave losses on their side," Talib Talib, a commander of a rebel division that receives support from Turkey, told NPR. "The Free Syrian Army [rebels] are prepared for big battle."

The challenge now is whether Turkey and Russia are able to successfully put this plan into action.

It's not clear whether the extremist factions will agree to pull out, or if the Syrian regime and the disparate pro-government militias will abide by the decision.

When asked at the news conference about the Syrian government's position on the agreement, Putin said: "We will hold additional consultations with the Syrian authorities soon."

For now, all civilians in Idlib can do is wait. "God willing we are hoping that things go smoothly. God willing we are feeling optimistic," a 45-year-old Syrian woman said as news of Turkish-Russian agreement emerged. Speaking from Kafr Zeita, a town in Idlib that has been heavily bombed in recent weeks, she asked not to be named for fear of her safety.

"Hopefully this time will be different than usual. We usually hear about deals like this and then there are violations of the agreements," she said. "Last time it took only a few days for the deal to fall apart and there were many lives lost in Kafr Zeita after bombing. Thank God we've been living this whole time, patiently praying to God."